I AM A LUCKY GUY in that I get to spend a good chunk of the year traveling the world taking photographs for various publications. When I take off on one of these adventures, I’ve got over a hundred pounds of photo gear on me. Cords, tripods, adaptors, duct tape; you name it, I’ve probably got it. It prepares me for when I find myself on the ground trying to get the ‘perfect shot.’

But the problem is that often when I return home, all I have are polished shots. My friends and family are always asking about some fun moments: “Where’s the outtakes, the postcards?”

So this time I made sure to grab more images of everyday scenes. I spent just over two weeks traveling through the beautiful and massive “Red Center” of Australia. The following are snapshots of the interesting people I met and the scenes that caught my eye.

This post is proudly produced in partnership with Travel NT. 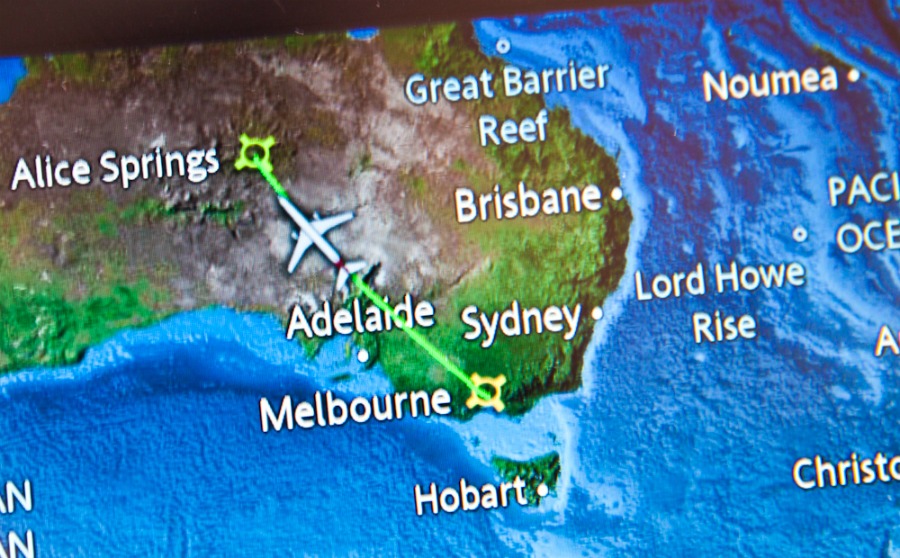 I don't think anyone who has ever traveled on an overseas flight hasn't sat and stared at the little in-flight map for hours. As much of a cliché as it is, I don’t think these shots will ever get old.

I actually had kangaroo several times on this trip and I have to say that it's quite tasty, and from what I have read, healthy too. 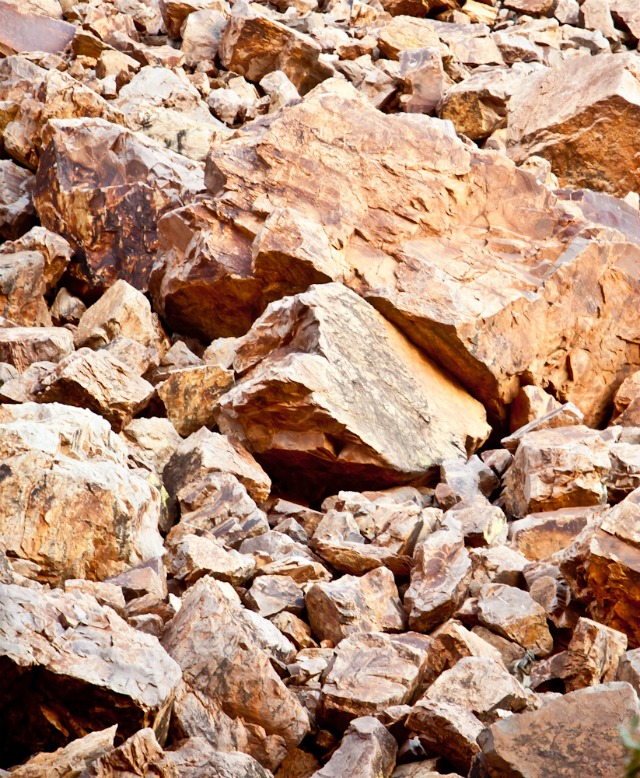 Can you spot the rock wallaby? (Hint: he's in the lower third of the photo.) 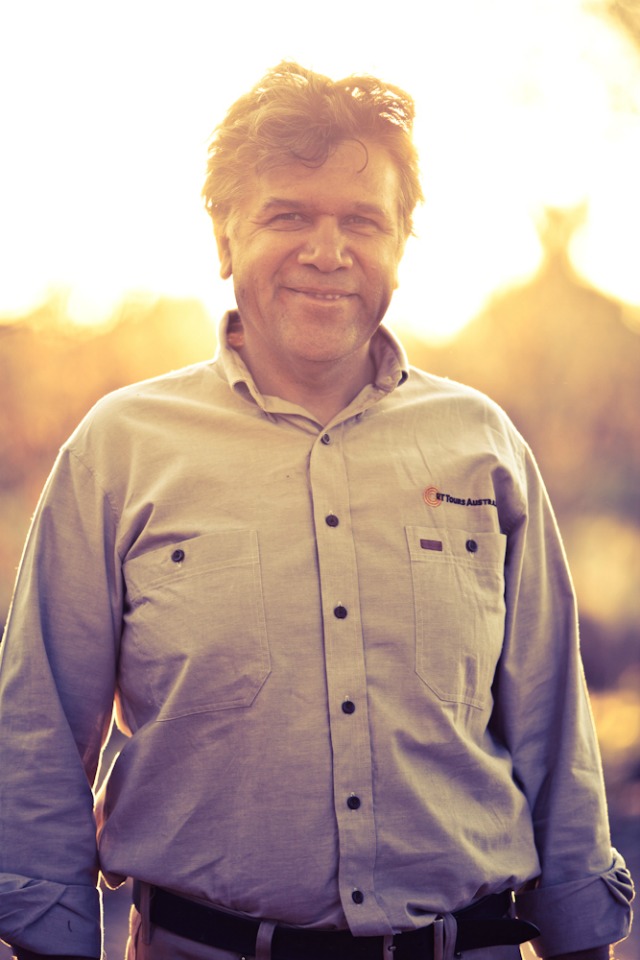 One evening I got the opportunity to head out under the stars for a bush meal with Bob Taylor. I was fortunate enough to meet a lot of great people along the way but Bob really touched me with his hospitality, local knowledge, damn good cooking, and curiosity about my culture. Bob is the man.

I came across some old-school Aussie pubs along the way. These places were classic, with decor that looked like it hadn't been touched in decades. I would have bought that Emu Bitter bi-plane off them if they would have let me.

One of the interesting things I came across in the Outback was the people working the different venues. Whether it was restaurants or ranches, I met people in their early 20s from all over the globe spending a year working in the NT. Japan, Denmark, Korea, Bulgaria... there were countless numbers of people just working their way through Australia. 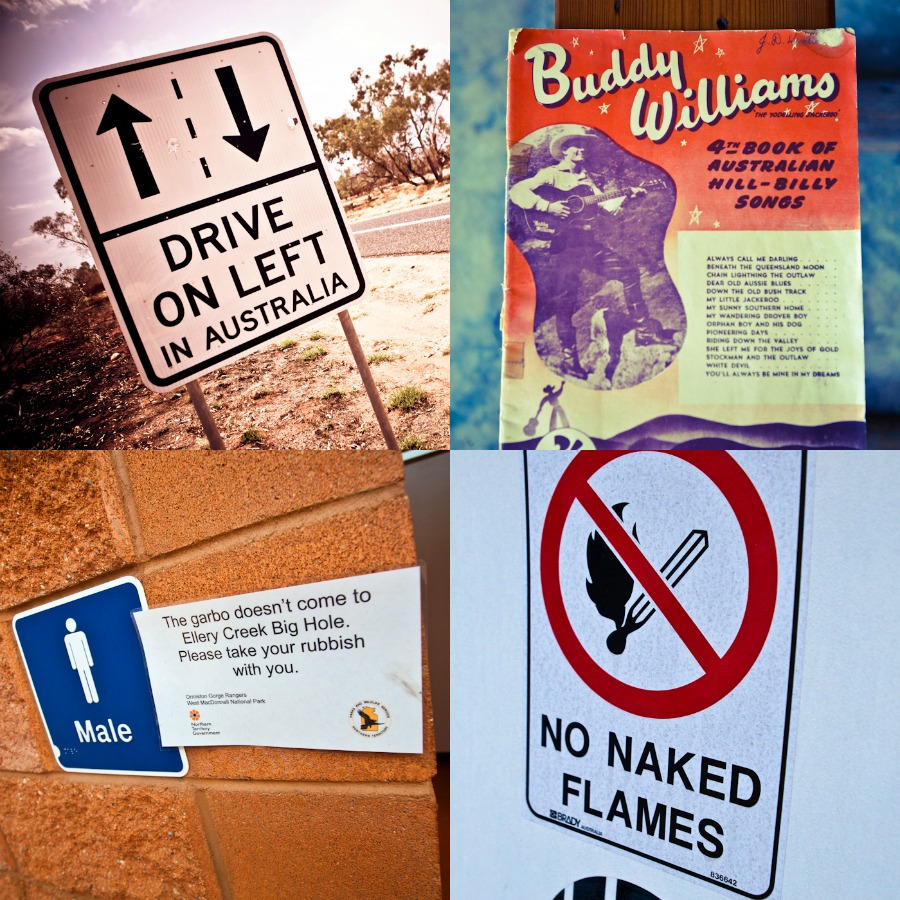 Garbo. Naked Flames. And Hill-Billy songs. All too good to pass up. The constant reminder that you're not home anymore. 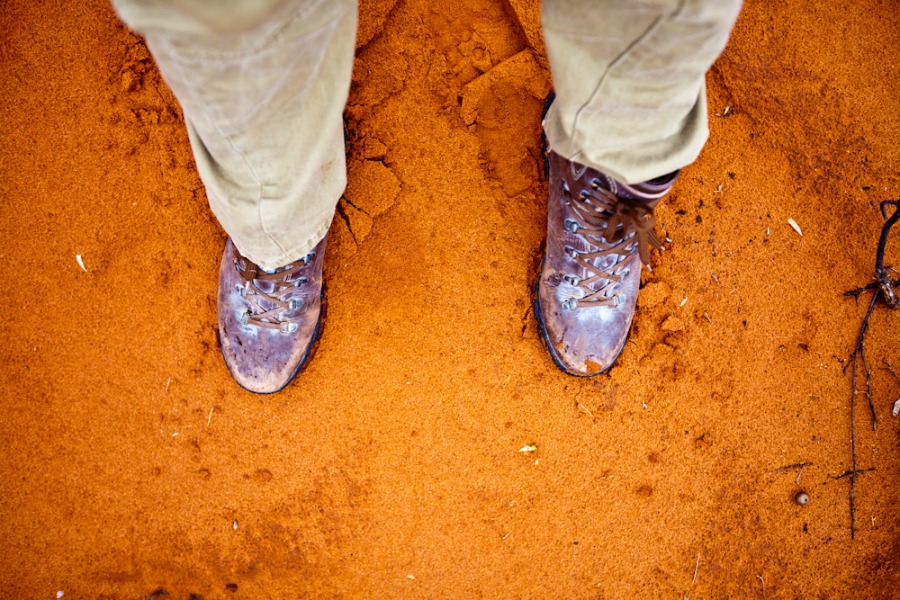 It's not called the "Red Center" for nothing, and the remarkable thing about the terrain is that the sand is so fine; it was almost like silica. Nothing like what I was expecting it to be. 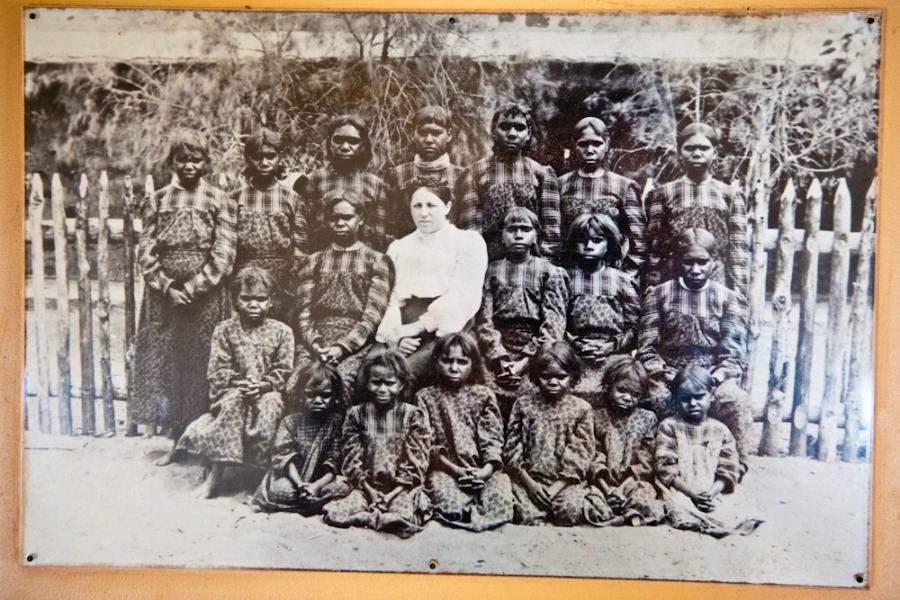 I came across this photograph while touring the grounds of Hermannsburg. It was taken during the early settlement years of the community. German missionaries established Hermannsburg in 1877 and introduced the indigenous population to Western customs and ways of life. 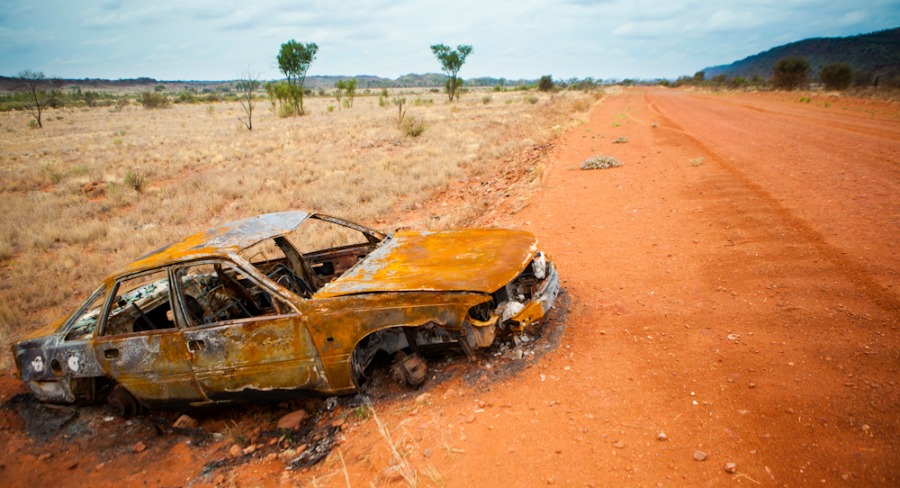 The Mereenie loop is a 200 km strech of unpaved road that goes from Kings Canyon to the West McDonnell Ranges, and is not where you want to break down. Depending on the time of year, if you run into some bad luck you may not see another car for days. A local had told me a few days earlier that no matter where you are driving in the Outback, you should always have a jug filled with several liters of water.

After a long day on the road, Kings Canyon Wilderness Lodge was the exact place I needed to kick my feet up. Popping open a beer and soaking in the scenery was not a bad way to end the day, and neither was the dinner under the stars which followed. 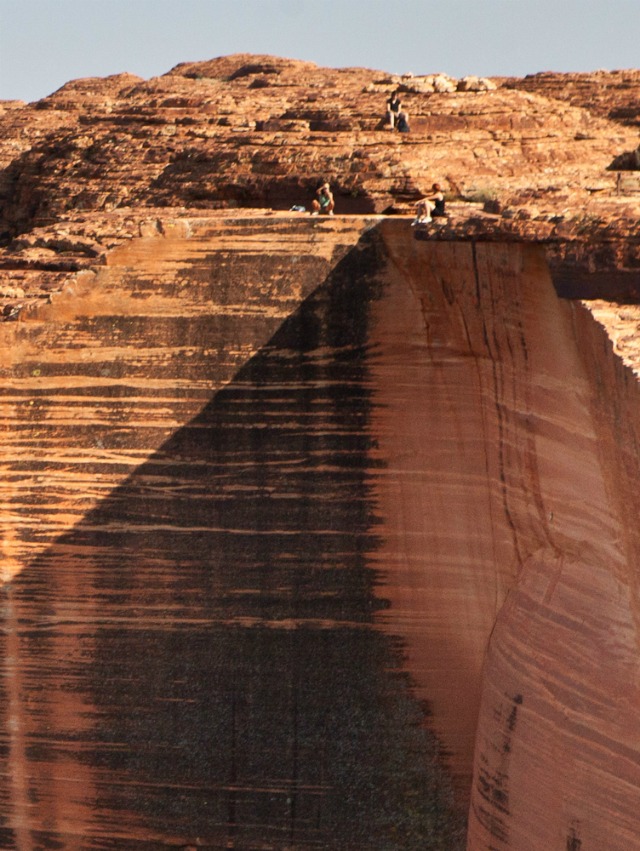 I'm all for getting some great shots of yourself and friends while on the road but I'm not going to lie, my stomach was a little uneasy watching these women hanging their feet over the ledge at Kings Canyon. Hope they got the shot! 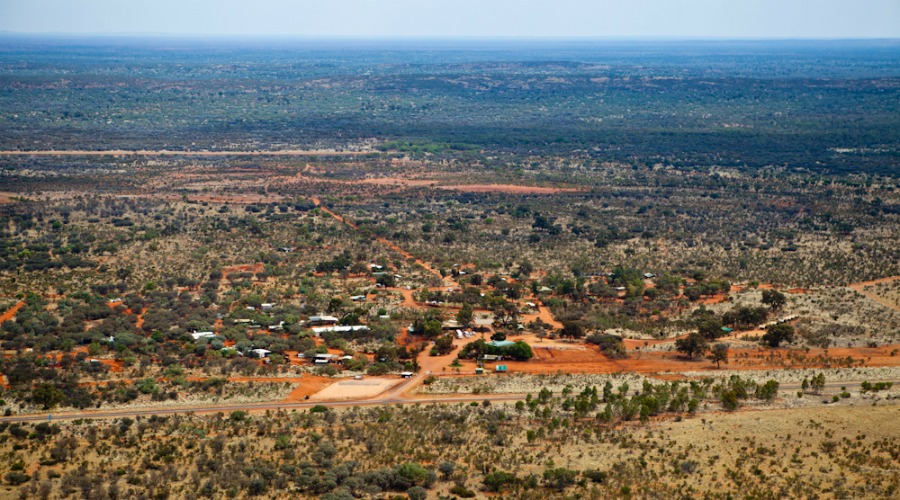 Ian Conway, the owner of Kings Creek Station, was telling me that when he first moved here in the early 80s, his closest neighbor was a two hour drive away. You can see in this shot that beyond his land there is not much going on. If you're looking for some solitude and don't want anyone bugging you, you might want to think about picking up some property in the Outback. 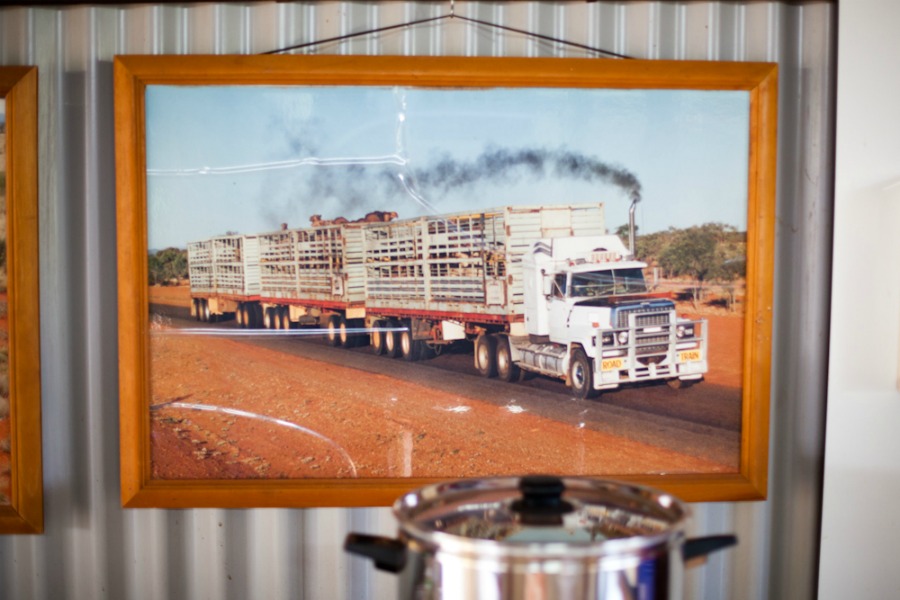 While driving through the Northern Territory, I couldn't get enough of the road trains that would come barreling past me. Massive trucks with three, sometimes four, trailers hauling cargo all around the Outback; everything from food to camels get shipped on board one of these beasts. 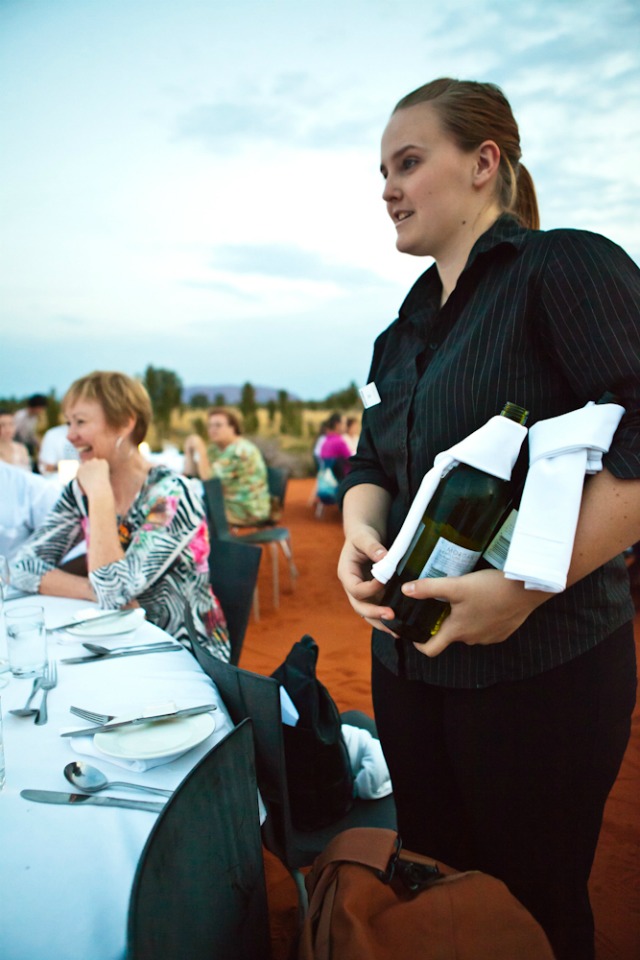 On one of my final evenings in the Outback, I enjoyed the Sounds of Silence, where I was served a delicious meal while sitting outside with Uluru as my backdrop. Moments like that are what make coming back home to reality a tad bit more difficult. 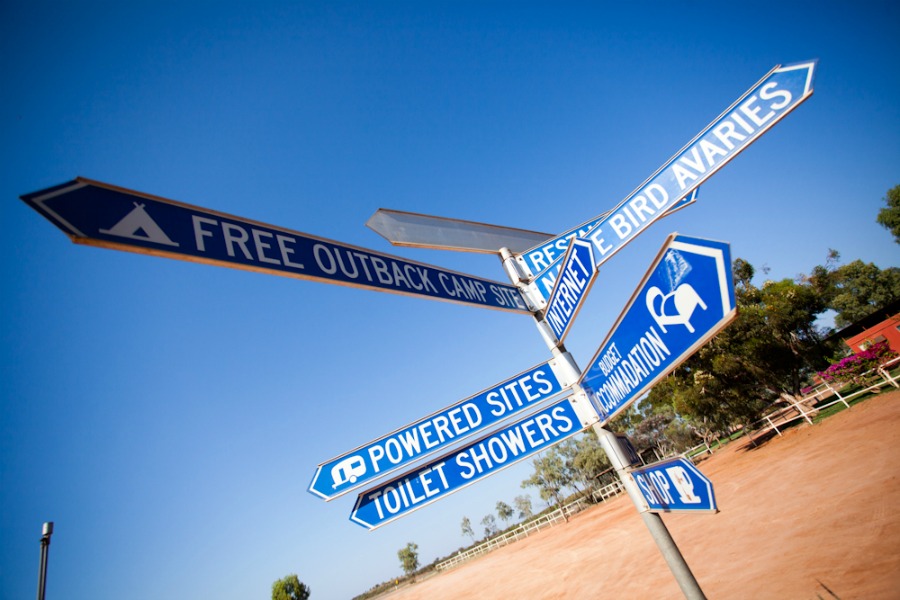 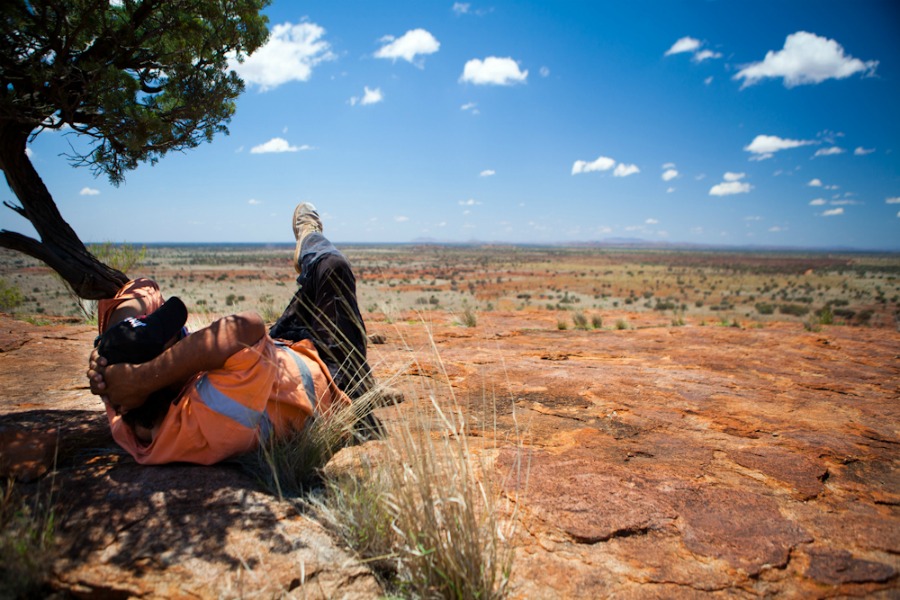 While staring out over the horizon, my local guide, Lee, rested against a tree atop Cave Hill and began to tell me stories about his ancestors, and how they would take walkabouts for months on end through these lands. That was a special moment during my time in the Outback; I can still close my eyes and remember that view from the top of Cave Hill.

Page was my kind of gal. She got stuck with me and answering my ridiculous questions for a full day but she was awesome. She was my tour guide from SEIT and took me along the Cave Hill tour. Not only was she nice, patient, and an extraordinary guide, but she could handle a mean BBQ too. 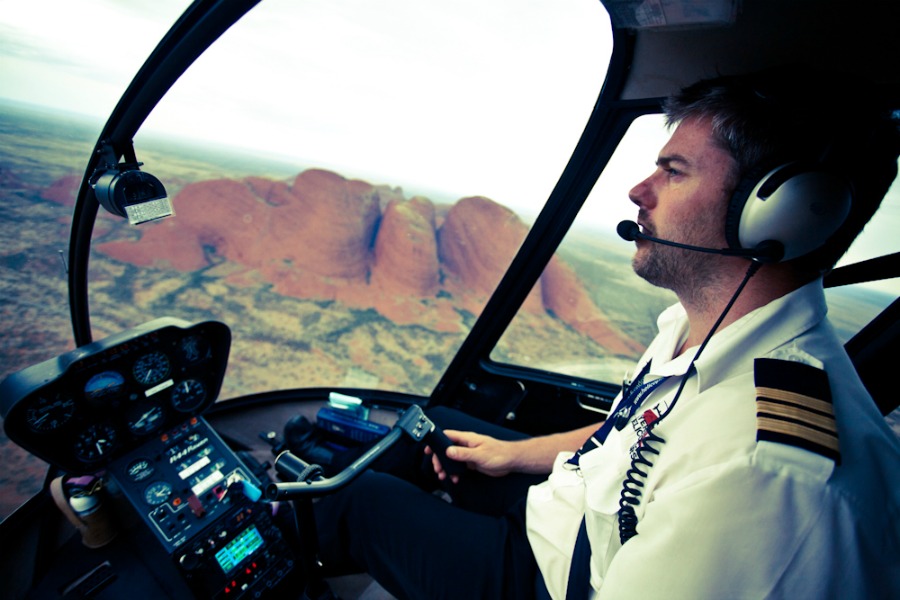 I became friends with a local helicopter pilot named Dave. He was a great guy, extremely easy-going. How could you not be if this was the view you looked at from your office window every day? 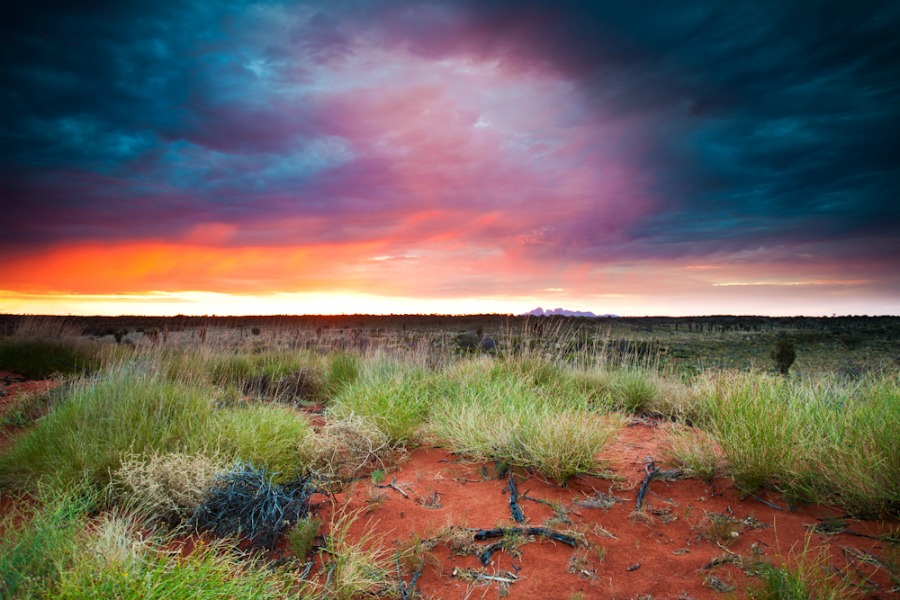 This was my last sunset in the Outback, a beautiful moment with Kata Tjuta in the distance.

Tagged
Australia Australia: Wild
What did you think of this story?
Meh
Good
Awesome
✖
travelstoke
Download the mobile app
stoked by