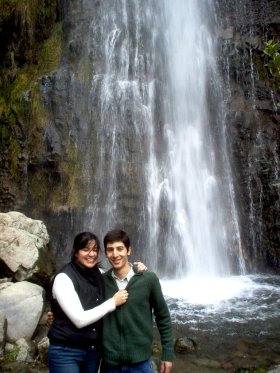 I’m floating in a muddy spring called Baños Morales while looking at the walls of Cajón del Maipo and talking to Jorge about Lil Wayne. Jorge is around 12. He wants to know who are the best “cantantes of hip hop.”

For some reason none of this seems improbable in South America.

“What’s this song saying?” He has a little mp3 player with built-in speaker.

He plays the first 5 seconds of that commercial hip hop track that goes “I see you winding and grinding up on the floor. . .”

“Te veo bailando,” I say. He starts laughing. Then gets serious and presses play again.

Cajón del Maipo is less than 2 hours from downtown Santiago. My friend Gustavo, Lau, Layla, and I rented a car and headed up here yesterday.

But as it was, renting a car for three days in Chile wasn’t that expensive (about $120 US), especially for a legitimate ‘sedan’, the minimal sized vehicle I’d advise for driving caminos de ripio in the Andes.

Basically, you just follow the G-25 the whole way along the river, although to explore the numerous side roads you should download and print out this map. 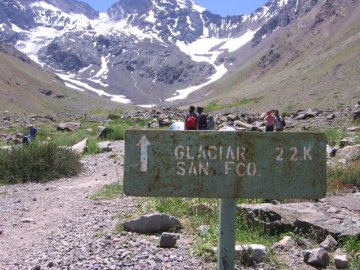 The whole time I was passing by the river I was wishing I had a kayak with me. The commercially rafted section of the Maipo is a S. American classic. You can set up trips via Chile Rafting.

There were some really gnarly looking creek runs flowing into the Maipo and steep sections in the headwaters for expert boaters. A lot of what I saw reminded me of Clear Creek in Colorado, only much bigger.

It was out of season when we went, but the Centro de Ski Lagunillas looked like it had amazing potential. Check the prices too, it’s super cheap to ski in Chile.

I jealously watched a van drop off a bunch of dudes with mountaineering gear in Baños Morales. From here you can access various climbing and mountaineering routes that go off in all directions as far as you can see.

It’s hard to believe this isn’t a national park, but simply a small chunk of Andean cordillera that you’re looking at right from downtown Santiago. 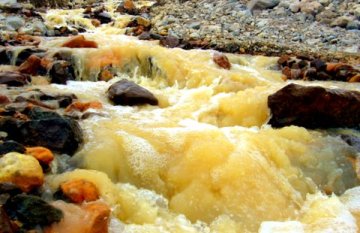 Later, after getting out of the springs, Jorge and I stand looking at the river. It’s a heinous-looking and at the same time very runnable stretch of whitewater.

“You think anyone will ever run that in a kayak?” I ask him.

Jorge looks at the flow. “No.”

Make sure not to miss Take Me to the River: 8 Simple Steps for Getting into Whitewater Paddling.

Tagged
Trip Planning Santiago, Chile
What did you think of this story?
Meh
Good
Awesome

Tweens vs. teargas: Protest over education in Chile

Chilean students: “We keep on protesting despite rain or snow.”

How to: Prepare for a protest

Throwing rocks at dogs in Chile

8 ways to humiliate yourself in Santiago