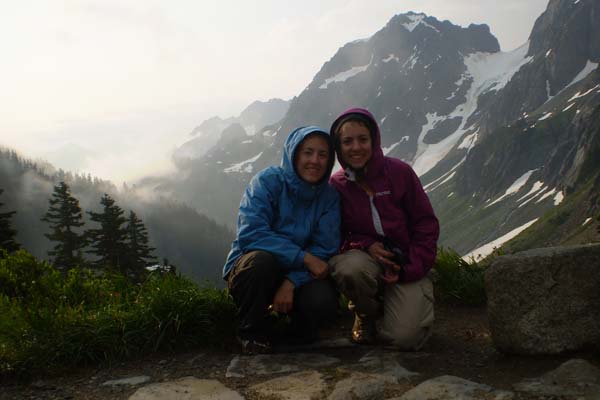 Megan Hill lays down the trek to the Sahale Glacier.

I HEAR THEM as soon as I get out of the car. Waterfalls. Across the valley are 7000ft saw-toothed mountains, flecked with melting glaciers. The roar of those long streams of meltwater carries for miles.

After an hour of dodging potholes on a partially unimproved Forest Service road, I’m damn happy to be standing up straight, about to get my pack on my back and get up into the mountains. 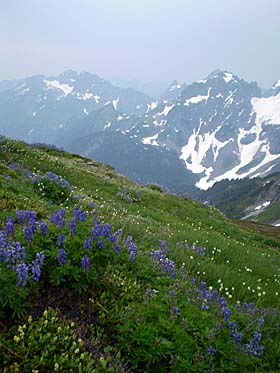 The Hike to Cascade Pass and Sahale Glacier

The 3.5-mile hike to the pass begins in the forest and emerges in alpine meadow after 2 miles. The views up here are big, extending into the valley and up to the tops of jagged peaks with names like Eldorado and Mt. Forbidden.

It’s a popular hike, so my buddy Sam and I have started early. The plan being to spend the night at the top of Sahale Arm — another 2 miles and a hell of a climb — above Cascade Pass.

The campsites at Sahale Glacier and others in the area are controlled by a first-come, first-served permit system, and sometimes people arrive at the Wilderness Information Center — just west of Marblemount on Highway 20 — to book even before the doors open at 7am.

Tip: To avoid leaving Seattle painfully early (it’s a 2-hour drive to the station from the city), camp the night at

We get to the ranger’s station at 7:00 the next morning and the line for permits curves around a model of the North Cascades National Park. I overhear the rangers telling people in front of me that the sites at Sahale Glacier are filling up fast.

This makes me nervous. I try to distract myself by finding the trail and the mountains we’ll see on our hike. Sam and I end up nabbing one of the last campsites. 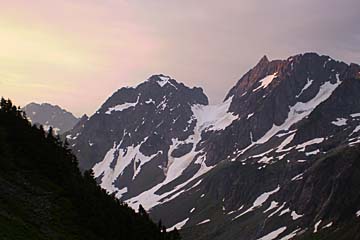 The Cascade Pass trail is usually crowded. Even though it’s a Tuesday, I’m anxious to get started as early as possible, so we quickly fill the gas tank and head towards the trailhead.

Getting there: The road past Marblemount goes over a bridge when Highway 20 turns left at the end of the town. There’s a sign for Cascade Pass. Stay on this road (Cascade River Road) for 23 miles until it ends at the parking lot and trailhead.

Before you go: Check both the trail reports and road conditions by calling the National Park Service (206-386-4495 ext.11) in Marblemount. The snow melts late up here and the unimproved sections of the road can sometimes be washed out, under construction, or blocked by fallen trees.

After an hour of hiking through the forest on some pretty mild switchbacks, the views start opening up across a deep valley. I can make out the waterfalls again in the distance, up high on steep peaks. The sun reflects off of the glaciers that seem to barely hang on to the sides of the mountains.

It’s a fairly quick and easy hike to Cascade Pass, just 3.7 miles in and without too much of an incline. We carefully make our way over the last of some snow patches before we’re at an overlook with views up and down the valley. It’s here we turn and head up a quad-grinding two miles to the Sahale Glacier camp. 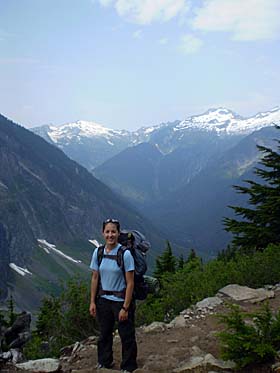 It’s a beast of a hike, but every time I turn around and look back down the curving bicep of Sahale Arm and out over the valley, I find a little more energy to keep going.

At the top we can see over the mountains we’ve been looking at all day. More jagged peaks extend beyond, seemingly going on forever. It’s no wonder locals and hikers call this the U.S. equivalent of the European Alps.

We pitch our tent high above treeline and behind boulders piled up as wind shields.

We wake up the next morning with thick fog tumbling down the peaks and filling the valley. The Sahale Arm/Cascade Pass trail isn’t a loop, so we head back down the way we came. The clouds above the mountains are lit pink with the sunrise.

Back at the pass, we’re early enough that no one else is around. I manage to get a flame lit on the camp stove for coffee despite some intense wind, and we have breakfast and instant coffee while the fog comes and goes.

From the Cascade Pass trailhead, you can also head to Stehekin, Doubtful Lake, and Pelton Basin, another popular overnight stop. Bathrooms are available here, and there’s a compost toilet at Cascade Pass (number two only, and you have to pack out your toilet paper).

Along Cascade River Road, you can find several other hikes (and permitted, front-country campsites). Check the Washington Trails Association website for ideas and trip reports.

After working up your appetite from the hike, Eat Your Way Through Seattle’s International District.

The Best Day Trips for Hiking and Beer in Washington State