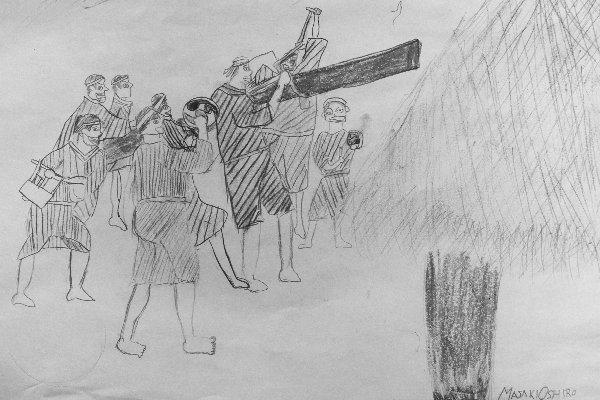 Matador’s Ryukyu Mike travels into the far northern reaches of the Ryukyu Archipelago for this story and returns with a whole new perspective on the world situation.

Imagine, if you can, a festival with no cotton candy, fireworks, rock ‘n’ roll bands, food tents, or people hawking overpriced trinkets. A festival where you can’t spend a dime; there’s nothing for sale. That’s the Shinugu Matsuri. 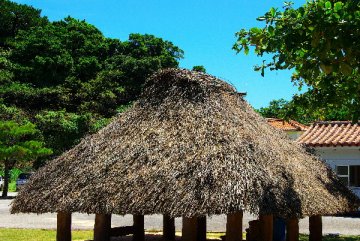 Where it takes place

Each August, all 250 residents of the village Ada Okinawa — as well as maybe 50 or 60 outsiders — come out for the Shinugu Matsuri.

An unassuming thatched-roof hut stands as the center of things. This is where the event both begins and ends.

The town is a small community with a fishing port and some farms. There are no hotels, shopping malls, convenience stores, churches, bars, or supermarkets. One small mom-and-pop store is where you’ll find a loaf of bread, some canned luncheon meat, and maybe a box of eggs. 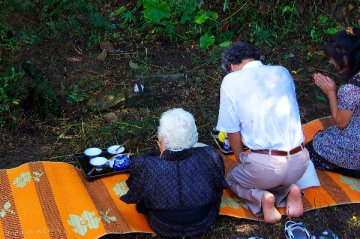 An ancient woman begins the ceremony by making offerings and praying, first in the hut and then at various small concrete shrines, before walking to the base of a mountain, where the blessing portion of the ceremony concludes.

Only 20 or 30 people with cameras bother to follow the elder through the entire ritual, and other than the family members assisting her, most of the rest are probably curious scholars or tourists.

Males only set off to climb the mountain in small groups of two or three at a time. There are three separate trails leading to three different areas, where the men decorate their bodies with leaves, vines, twigs, and brush from the jungle. 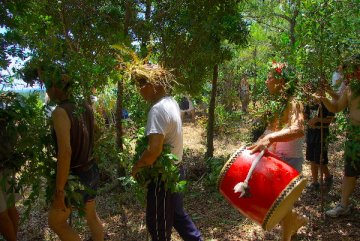 Some are as young as 3 or 4, the oldest likely in their seventies. Each group has an elder who directs the ceremonies, tells the group which way to face for prayers, and leads them in chants while beating a cadence on a large red drum.

Only two quick 20-second prayers are offered. The first goes out to the gods of the mountain. The men bow on their knees and face a higher point in the hills in silent prayer. Next, they shift to face the ocean below and pay their respects to the god of the sea.

After the prayers, a quick adjustment is made to their jungle body decorations, and each picks up a branch of a tree. Circling the area and chanting “Eh, ho, ho,” they stop on cue from the elder with the drum and shake the branches close to the ground, chasing evil spirits away.

Coming down the mountain, each band stops at a clearing about halfway to town and repeats the circular march and warding-off of evil spirits. At this point the drums and chants from all three trails can be heard by the villagers below. 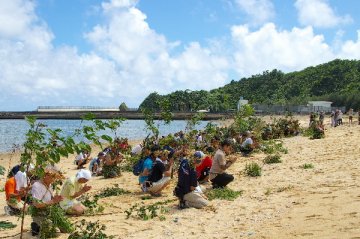 Groups of women converge on a bridge crossing the river that leads into town. They offer cold drinks and snap photos of the men, who haven’t been seen in over two hours.

Following this, the whole crowd converges in a field just outside of town. The women make their way to the center and the men from the three trails circle the area, marching to the drum beats and chanting “Eh, ho, ho.”

Then, on a cue from the elders with the drums, the men gently swat the women on the heads with their branches, ridding them of any evil spirits.

Next, everyone marches to the beach where a final prayer is made in the direction of the mountains.

The vines, plants, bushes, and branches from the jungle are stacked in a pile, and the men run into the water, where they cool off from their mountain hike. 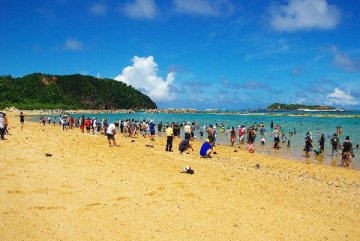 After a twenty-minute dip, they find their original trail leader and march to the drums for a quick rinse in the river before returning to the center of the village.

Activity practically ceases for the afternoon at the straw hut and in the town square until just before sundown. Tents along the edge of a field by the hut are stocked with beer and sake, coolers of ice, and some small boxes of food.

An evening of festivities

Just before the sun goes down, several traditional performances take place. One simulates the planting of rice, others fishing and folklore. All participants are dressed in traditional Okinawan clothing. Folk music blares from a stereo system accompanied by drums and sanshin (a 3-stringed instrument). 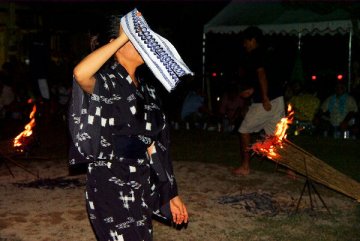 Those in the audience sit on the sidelines on straw mats, chat, sing, drink, and sometimes jump up and join in for a dance or two. The last few performances consist of some lively tunes where everyone is invited to partake — indeed, those who don’t are frowned upon for not participating.

Well before midnight, the party is over, the music stops, crowds wander home, and only a few hardcore sake drinkers remain.

The next morning there will be Okinawan Sumo and in the evening a repeat performance of traditional dances and folk music.

What’s it all about?

The typical Okinawa family doesn’t belong to any one religion. They worship their ancestors, and they don’t go to a church, synagogue, or mosque to do so.

Religion in the Ryukyu Islands is a combination of Buddhist, Confucian, Shinto, and animist beliefs. Offerings are made to ancestors on a daily basis and money is donated to no powerful religion or figure.

Maybe the world’s political and religious leaders should attend a Shinugu Matsuri and study the culture behind it.

These people have no organized religion; nor do they go to war.

If you’re thinking of heading to next year’s Shinugu Matsuri, don’t forget to check out 10 Great Outdoor Events in Okinawa and The Traveler’s Guide to Okinawan Dialect.

Pyramids, art, and mole sauce make Puebla much more than a side trip from Mexico City
50 African proverbs that will get you thinking
29 phrases to get you started learning Pidgin English
23 of the most beautiful words in the world
7 wild and weird Nevada attractions that have nothing to do with Las Vegas

New Year’s Day in the life of an expat in Okinawa, Japan