I’D TRACKED MANY Great Animals of the North over the last year, researching a book that would take me to every province and territory in the world’s second largest country. Polar bears in Churchill, Manitoba; beluga whales on Somerset Island, high in the Arctic Circle; moose in Newfoundland; the world’s only free-ranging herd of bison in the Northwest Territory’s Wood Buffalo National Park — a park bigger than Switzerland. As bountiful as bears, wolves, and whales are in Canada, the Kermode sits apart.

The “spirit bear,” as the Kermode is widely known, is protected by the First Nations in the Great Bear Rainforest, on the only two islands where it can be found. The Great Bear Rainforest, located on the coast of BC between Vancouver Island and Alaska, was established in the mid-1990s as a protected environmental region. It comprises 27,000 square miles of waterways and temperate rainforest, mostly in its natural state, abundant with wildlife.

It’s also an area that has come under threat with the proposal of the Enbridge Pipeline, which would pipe oil from Albertan tar sands to the BC coast, and turn this pristine wilderness into an oil supertanker highway. The issue has galvanized First Nations communities, travelers, liberals, and environmentalists. Here’s a small glimpse from my recent trip to the Great Bear Rainforest, and my search for the rare and elusive spirit bear.

[Editor’s note: Robin was a guest of the King Pacific Lodge.] 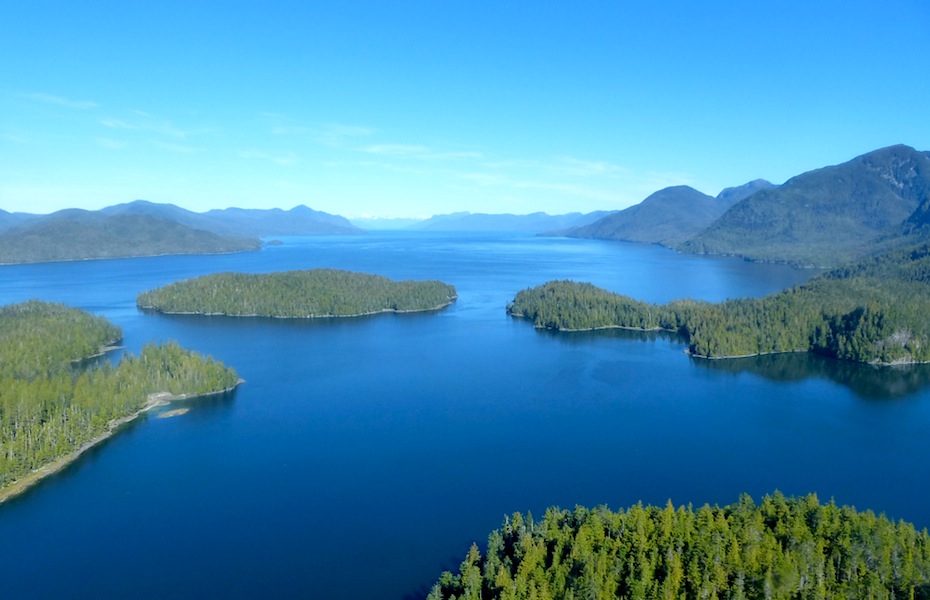 Thanks to the Great Bear

To reach our destination, we flew to the mainland town of Bella Bella and caught a 45-minute floatplane over some of the most spectacular views on the West Coast. Hundreds of islands create feeding channels that attract migratory whales each summer. Our destination was the King Pacific Lodge on Princess Royal Island. 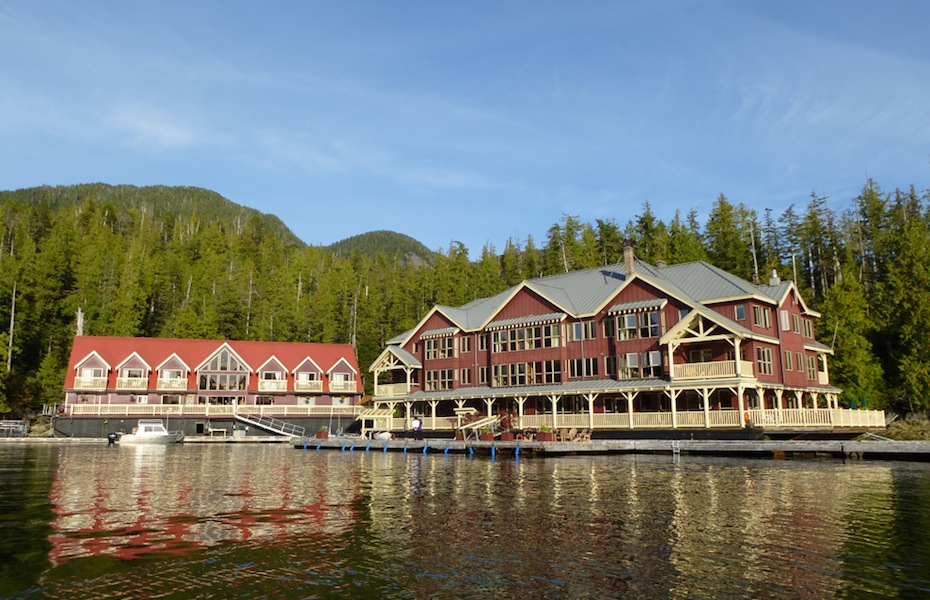 A floating luxury hotel, the King Pacific Lodge is barged in each summer from Prince Rupert, 80 miles away. Guests are treated to gourmet food; daily activities including fishing, heli-hiking, a full spa; and the main draw each September, bear watching. 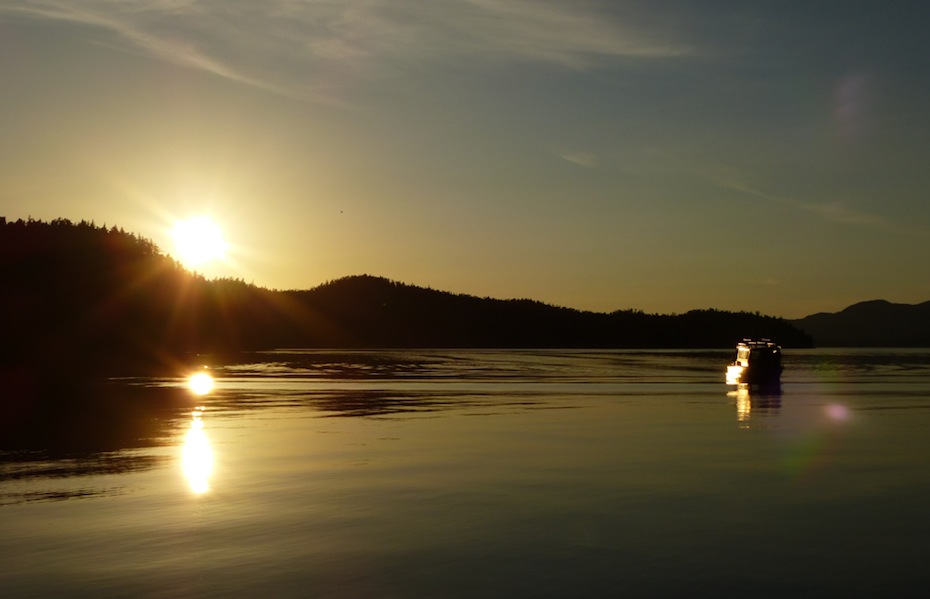 One of KPL’s boats returns from a successful afternoon of whale watching. The waters of the Great Bear Rainforest attract humpbacks, finbacks, and pods of resident, migratory, and offshore orcas. Their fate, along with that of the islands, is one of the primary concerns about turning the area into an oil tanker distribution center. 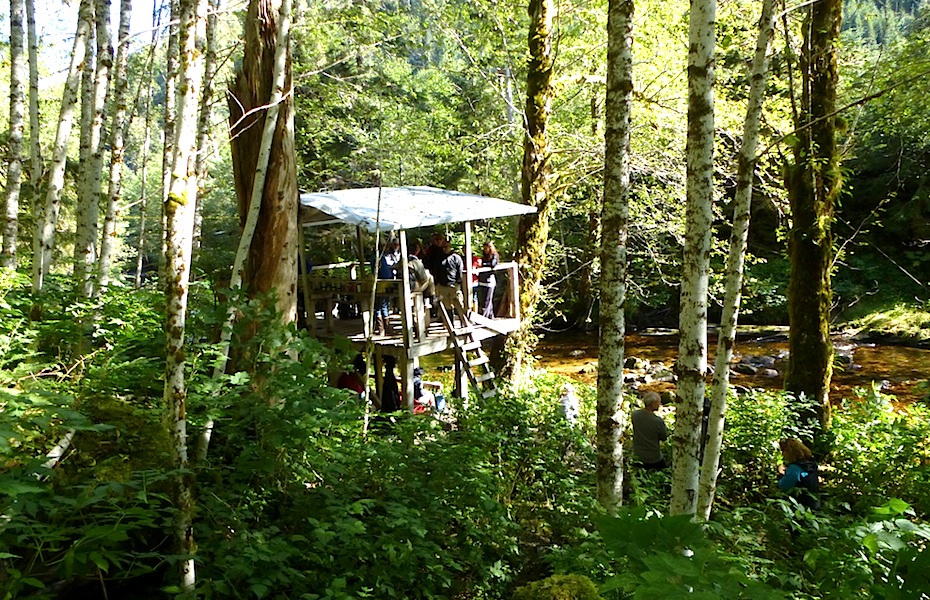 We took a boat over to Gribbell Island, one of the two islands inhabited by the Kermode, or spirit bear. Unobtrusive wooden platforms have been erected along a creek where the bears feed on spawning salmon. 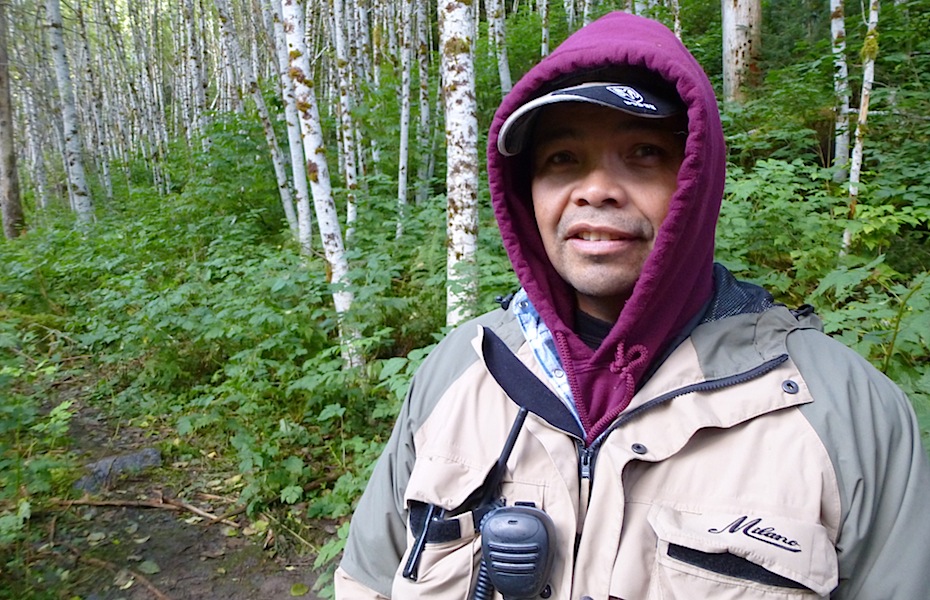 Nobody has done more to protect the bears of Great Bear Rainforest than local Gitga’at guide Marven Robinson. When National Geographic did a cover story on the spirit bear in 2011, Marven was the guy they called. He built the platforms, and personally educates visitors as they hope to catch a glimpse. “I’m here to protect the bears, not the people,” he said. 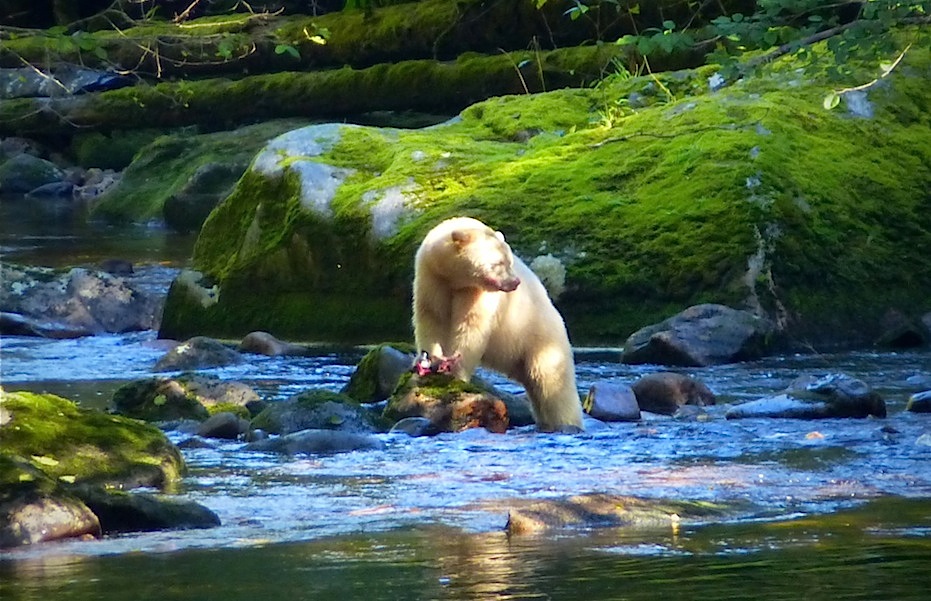 A 300lb male spirit bear appears down the creek. Kermode bears have a recessive gene that gives them a distinctive white coat. It's not a polar bear, and it's not an albino. A black bear mother might have a Kermode cub, and two Kermodes might have a black bear cub. There are fewer than 1,000 Kermode bears in existence, and they are unique to the Great Bear Rainforest. 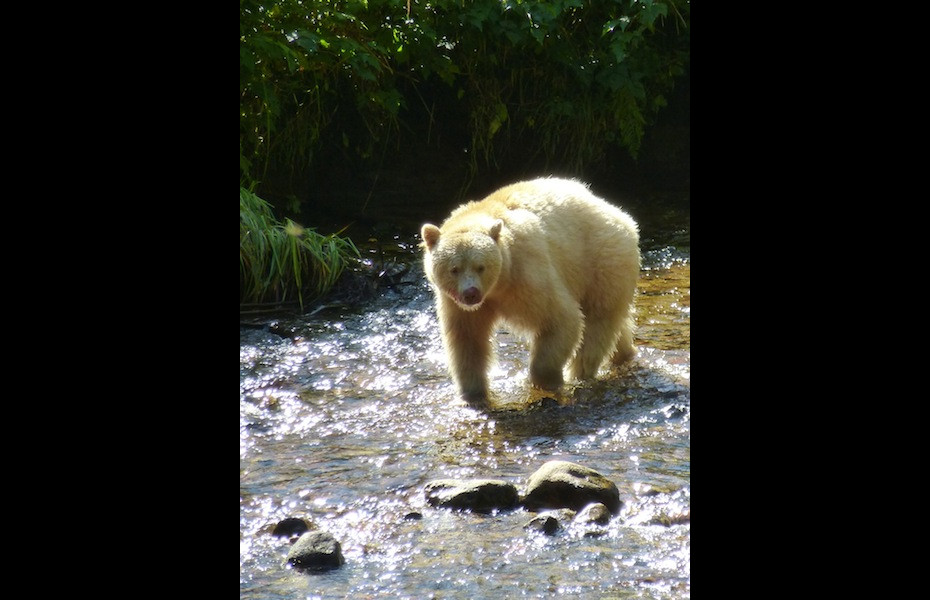 Not a polar bear

The Kermode approaches, swiping at pools boiling with salmon. A black bear was also feeding in the creek, and chased away the Kermode. According to Marven, the bears can smell fear, on each other, and on people. Spirit bears have always been protected by the First Nations, and have never been hunted for their meat or fur. Hunting black bears in the region, who carry the recessive gene, still threatens to wipe out the Kermode population. Indigenous groups in the area recently took the initiative to ban trophy hunting in the Great Bear Rainforest, a direct challenge to government policies. 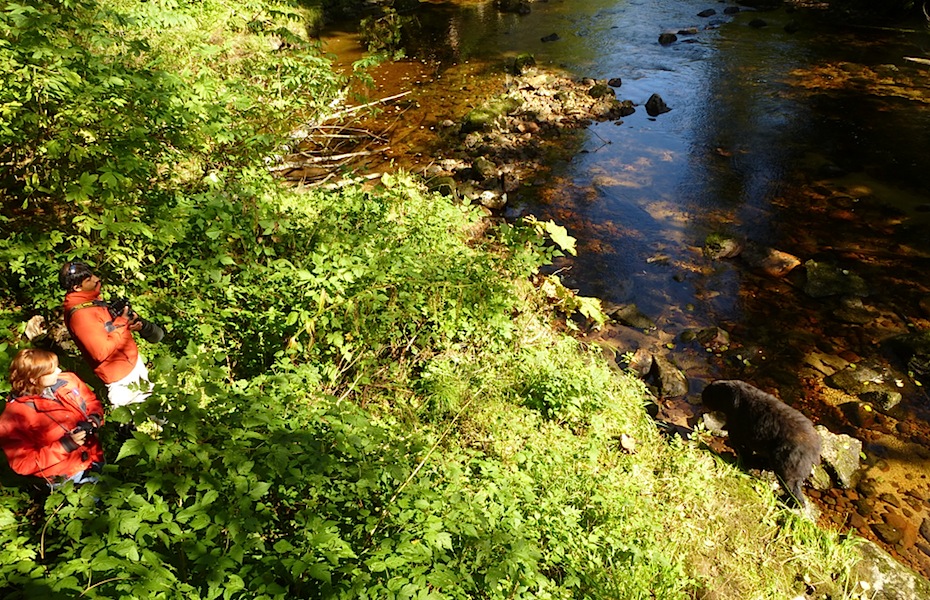 How close can you get to the bears? Very close indeed. "Don’t run away, just stand still!" advised Marven, when this black bear began to walk up the riverbank. It hung around for about 10 minutes, and then wandered off. 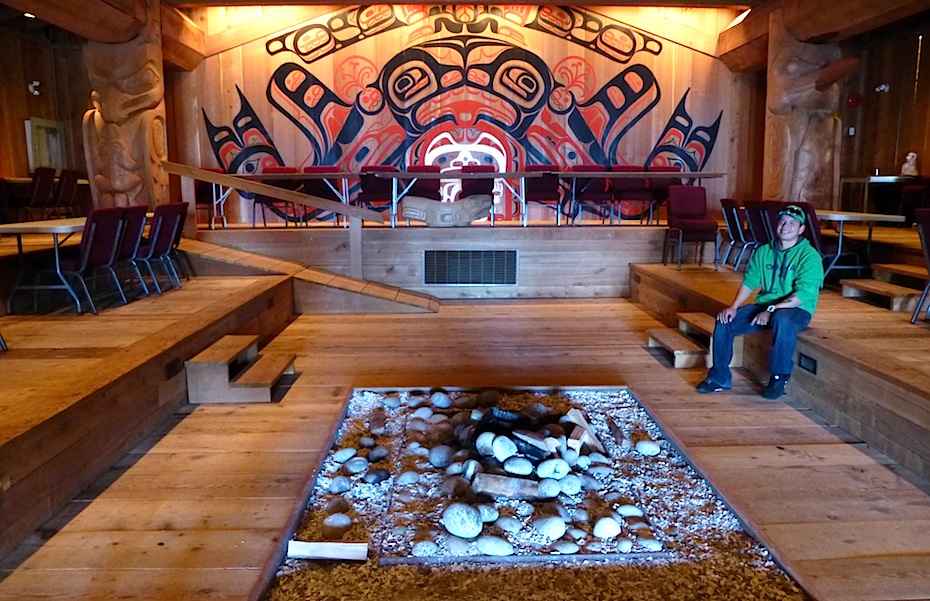 In the small Gitga’at community of Hartley Bay, our guide George showed us around the community centre, where families gather for feasts, pow wows, celebrations, and other special occasions. The community is dry (no alcohol allowed), linked by boardwalks, and comprised of six large families. There are about 200 band members, governed by a band council. 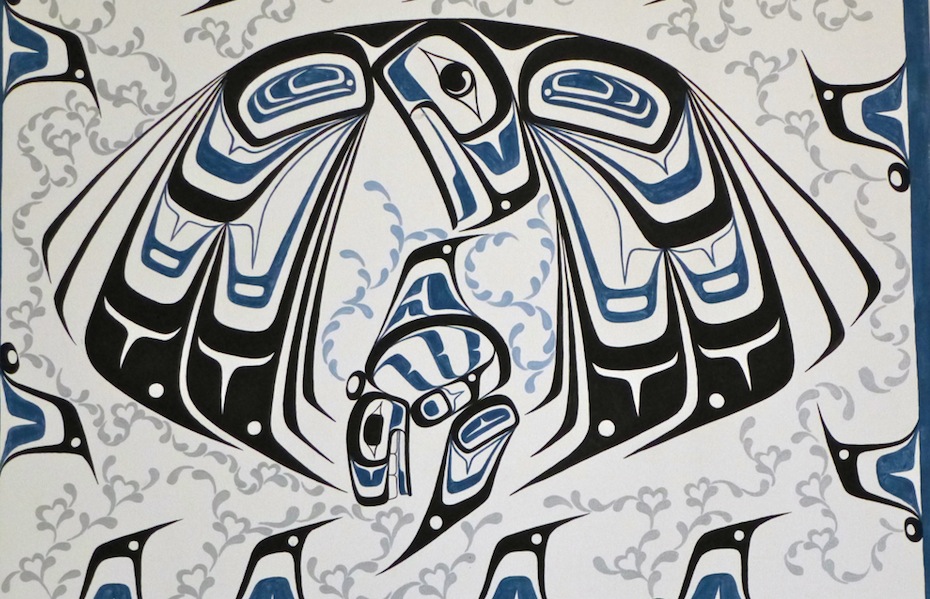 George introduced us to his Granny, who proudly boasts “65 plus” grandchildren. This painting, in her living room, depicts her crest (the killer whale), in the embrace of her late husband (the eagle), bordered by their 11 children, with their numerous grandchildren represented by hearts. “It needs to be updated,” she laughs. 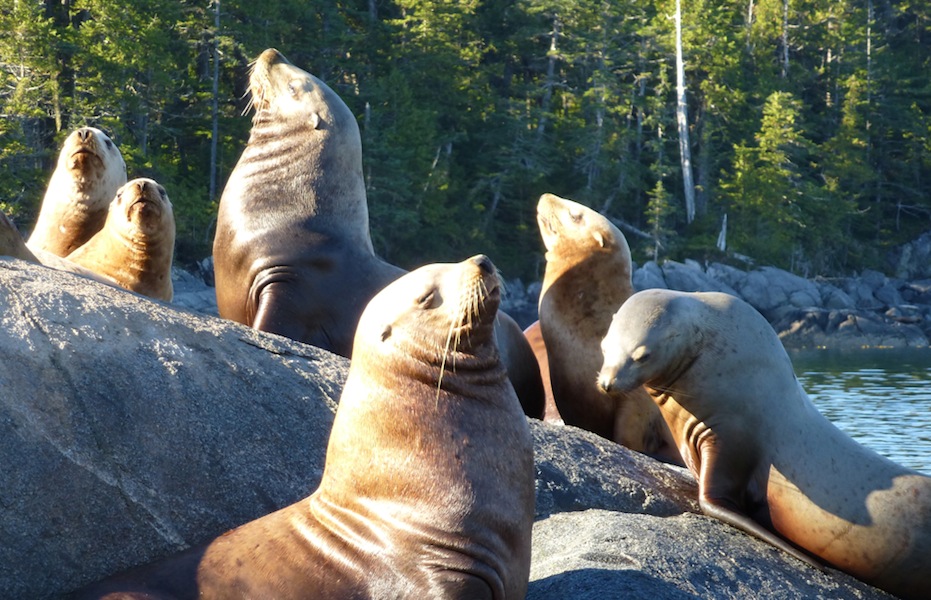 Orcas had been spotted in the area, and we were hoping for something special around Sea Lion Island, where hundreds of sea lions roared on a long narrow rock. These guys, on the other hand, were not impressed. 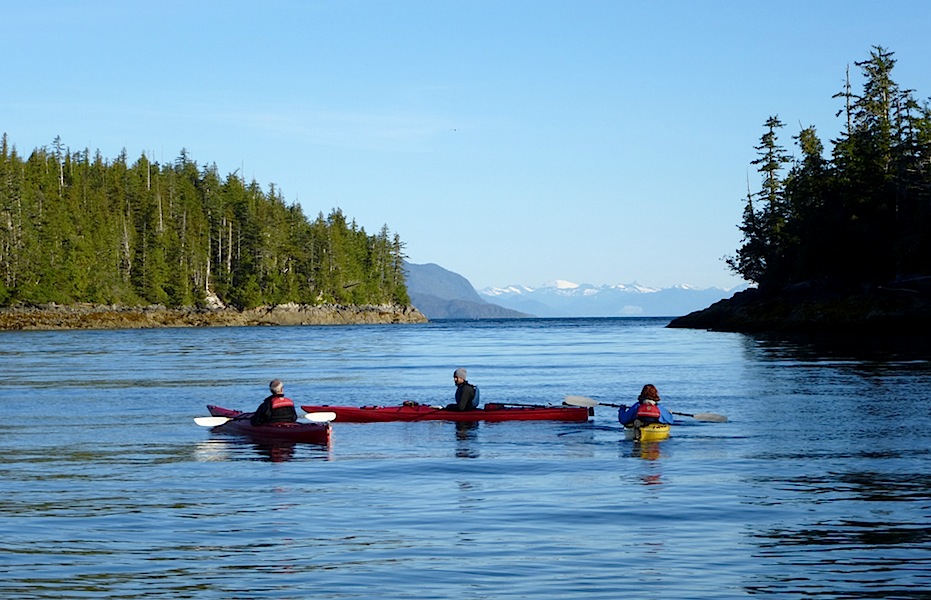 Guests take kayaks out into Barnard Harbour to explore the starfish and marine life in the intertidal zone. 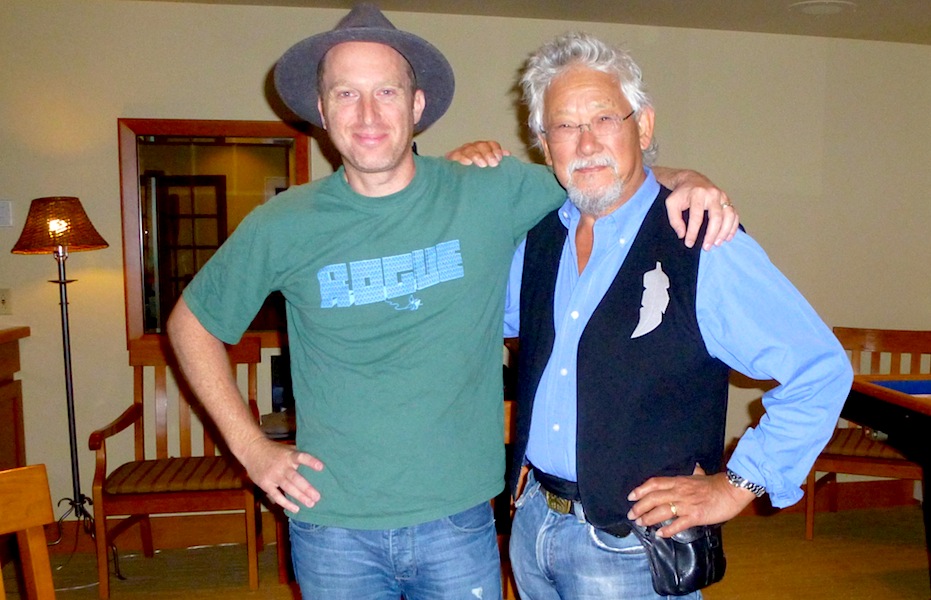 Me and Mr. Suzuki

The King Pacific Lodge prides itself on supporting the area and the communities within it, employing Gitga’at staff, and with sound environmental policies. Joining me for the weekend was David Suzuki, Canada’s most outspoken environmentalist. “This is a faint shadow of what this country was,” he tells me. “We’re not charging the right price for the ecological damage we’re causing.” Suzuki has been at the forefront of the protest against the Enbridge Pipeline. (Photo credit: Ana Esrock) 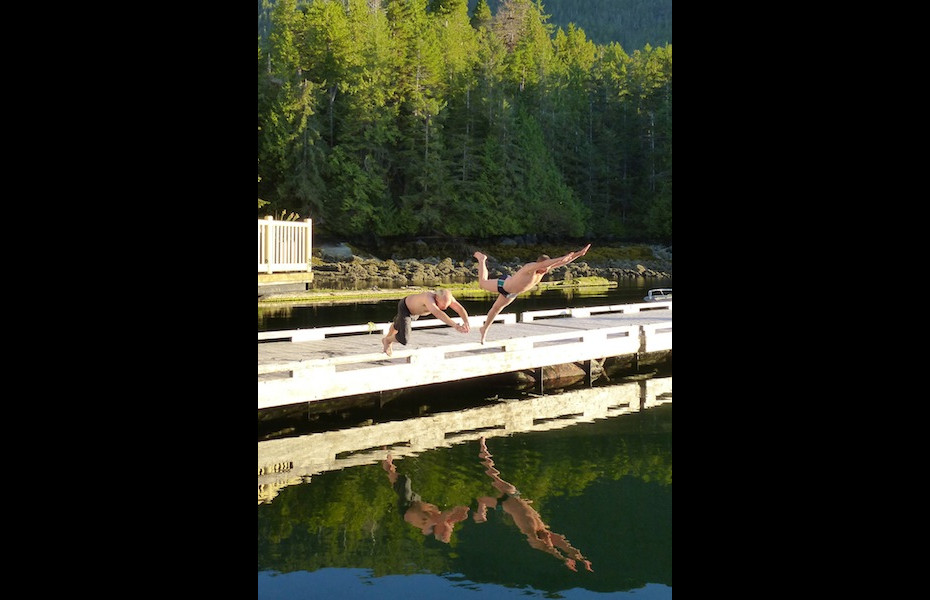 Taking a swim in the cool waters that surround the floating lodge. At night, bioluminescence lit up the dark waters under the spotlight of stars.

Tagged
Sustainability British Columbia, Canada
What did you think of this story?
Meh
Good
Awesome