IN A VERY SMALL VILLAGE in one of the quietest corners of the UK, there’s a bay that’s one of the best surf spots in the United Kingdom.

I’ll start this guide with a warning. Croyde Bay will dig deep into your subconscious, and you’ll be planning your return before you’ve even made it home.

Famous for its cream teas and sleepy villages, Croyde Bay is located in Devon, the neighboring county of Cornwall. Croyde offers decent Atlantic waves and an unpretentiously warm welcome for both surfers and holidaymakers.

The village is entered via a cliff top road with spectacular views of Croyde bay on one side and the expansive Saunton Sands on the other.

Sunk into the Devonshire countryside, this pretty spot has both beach and reef breaks with a good mix of locals and visitors. Croyde Bay is by no means a secret location; people have been coming here for years. It is, however, a very cool place to surf till dusk and then swap stories with fellow surfers in one of the village pubs.

It’s worth mentioning the British weather, which is unpredictable at best. Traveling to this location in the summer will not necessarily guarantee sunshine, and it may well rain. However, if you are going there to surf, getting wet should be the least of your worries…… 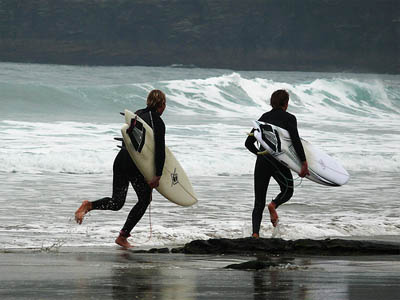 I first came to Croyde a couple of years ago with the intention of learning to surf. I returned home after a long weekend aching and sore but also energized from the time spent on the surfboard.

I simply had to go there to surf again and have made the seven-hour drive from my home several times since.

Owing to its popularity, Croyde has often hosted the British surfing championships. There are reefs to the north and south of the beach (Baggy End Reef and Downend Point), but beginners like myself cautiously stick to the safe zones marked out by the lifeguards on duty during the day.

I have been warned that low tide is not a good time for inexperienced surfers as the waves are particularly powerful.

The popularity of Croyde means that it can get busy during peak holiday periods when many of the surf schools crowd the water.

The popularity of Croyde means that it can get busy during peak holiday periods when many of the surf schools crowd the water.

It’s better to surf at the quieter periods in the morning and evening when you are more likely to be in the water with just locals (meaning less knocks from out-of-control boards).

Croyde is a very good place to learn to surf, as there are numerous schools that run half or full day sessions. Surf South West is a decent outfit with patient, experienced teachers and good facilities located close to the beach.

After you’ve squeezed out the last of the daylight on the waves, there are three pubs in the village that serve good, inexpensive meals and real ale for the English beer enthusiast.

There is a party atmosphere at night and in The Thatch Pub (a typically quaint village hostelry complete with thatched roof) you will be able to see the local musical talent on most weekends.

There are also some more expensive restaurants; in the Blue Groove we had to wait a ridiculously long time for our meal, disappointing considering the prices we were paying.

Staying in the UK is generally costly but there is a good range of accommodation in the village, starting with several campsites (most popular with budget-conscious surfers), guesthouses and hotels at the top end.

There are several convenience stores that sell everything you need for an English breakfast cooked al fresco on a camping stove. (Editor’s Note: Ugh. – TP)

A couple of surf shops hire wetsuits, surfboards and bodyboards. The water in the UK is always cold, even in summer – wear a good wetsuit.

This is a paradoxical location – one part rural English village, one part surfer’s paradise. The beach and waves are crowded during the summer and the water can be colder than a polar bear’s nipple.

However, there’s something special about Croyde Bay – the combination of waves and rural English welcome is simply unforgettable.

There are a lot of surfers in the Matador lineup.

Rhys is a native Australian who knows some good waves in Vietnam.

HawaiiBren can point you to the Top 10 South Shore Spots For Surfer Chicks, and over at the traveler’s notebook the inimitable Spencer Klein shares the Top 10 Surf Spots (For Mortals) In Hawaii.

Also check out Beebe’s’s definitive list of the guide to surfing in rural Spain.

Tagged
Surfing Trip Planning
What did you think of this story?
Meh
Good
Awesome

California said to stay close to home, and that turned out to be a great thing
The 11 hardest, most dangerous mountains to climb in the world
For the perfect day of hiking and Colombian coffee, head to Jardín
How to make the most of New River Gorge, America’s epic new national park
The newest US national park is in West Virginia