THE TERM “FARM-TO-TABLE” is a trigger phrase in society these days. Throughout my travels, I’ve found people from all over the country praising this hot concept — the idea that something could be plucked from the dirt, washed off, maybe spruced up with some butter, and placed right on a dinner plate. Farm-to-table is now an advertising construct, and consumers like us are acting like it’s something new and groundbreaking.

I’m from Waldo County, Maine, and for my family, it was always farm-to-table. My older sister and I grew up helping my parents in the gardens. The first thing I ever really cared about was a crop of tomatoes in our 100-foot-long hoop house. I don’t remember how my crop fared that summer, but I do remember the delicious canned tomato sauce my mom made, and has made every fall since for nearly two decades.

My parents have grown grapes, cherries, kiwis, and 75-pound pumpkins. When it came to gardening, they just got it. And my sister and I reaped the benefits. In fact, our entire existence can be traced to a book written by Helen and Scott Nearing, Man’s Search for the Good Life, a kind of back-to-the-land bible penned in 1954 here in Maine. My dad happened on a copy when he was a teenager; years later, after traveling around the country, he came to Maine because of that book. The same tattered copy still sits on my parents’ shelf. Now that I’m a co-owner of my first piece of raw land — 12 acres in Cherryfield — I have my own copy.

The movement that the Nearings pioneered during the Great Depression is something Maine doesn’t get nearly enough credit for. Our back-to-the-land impulses stay under the radar. While some towns and communities across the country are slowly adopting this food philosophy, Maine is made up, almost entirely, of people participating in the movement. Much of that can be attributed to the lifestyle the Nearings inspired.

The local food movement is just one beautiful idea we Mainers had, and within it you’ll find evidence of the strength and resilience of our hard-working communities. Here’s how it’s all tied together. 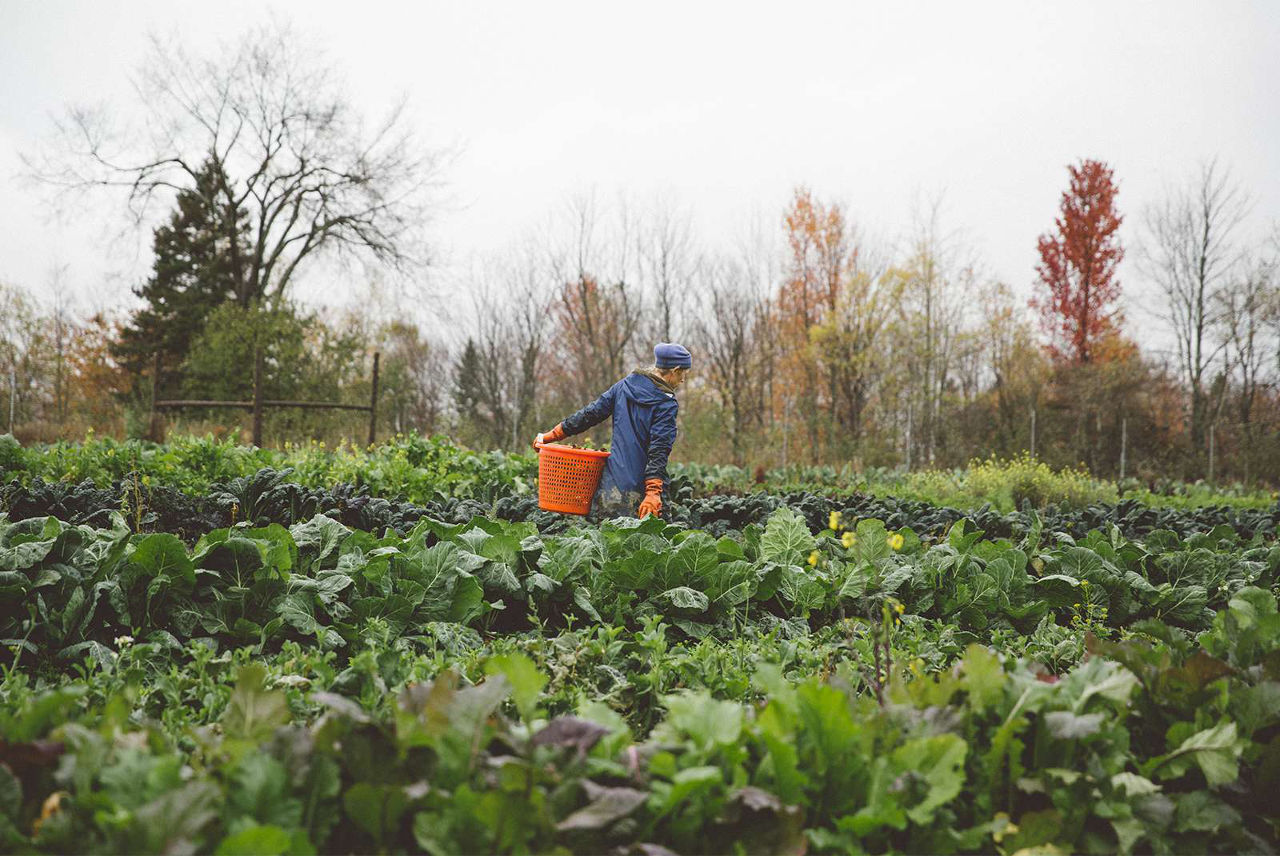 While most of my own millennial generation is migrating to city centers, there are many of us who reject concrete, smog, and high rents. We’ve grown up in the Digital Age, so we know the good life doesn’t need to be sought in an office or an urban center. We’re okay with taking a risk if it means we can live the way we want. According to this NPR report, last year, the average age of the American farmer was 58.3, and people under 35 are only taking to agriculture at a rate of 1.5%. But that’s a national average, and Maine is an anomaly — our population of millennial farmers increased by 40% between 2007 and 2012, and it’s only been climbing since.

Young farmers are coming here because we’ve cultivated a community that helps them succeed. The Maine Organic Farmers and Gardeners Association (MOFGA) runs apprenticeships and a farm training program. Our Department of Agriculture offers rural development grants and loans. And on any given day when listening to WERU, Maine’s community radio station, you’ll hear young farmers coming together to discuss new opportunities and ideas for our state’s agricultural industry. Many people are even choosing to buy farmland in groups to offset the cost.

Every Saturday at the local farmers market, I see people my age selling their own crops and products. My friend Morgan sells organic blueberries for Burke Hill Farm every weekend in Ellsworth. I got a CSA (Community Supported Agriculture) share last year through Carly at Tide Mill Farm — a family operation that’s been in production for nine generations. The year before that, I bought a vegetable share from a woman in Portland who’d inherited some land and decided to try farming it.

Seeing all these farmers within my age group assures me that we can carry forward the back-to-the-land movement. Whether we grew up with it in our homes or didn’t find it until our 20s, this is a way of life we value.

We’re bringing breadmaking back to its local roots.

When my mother makes something from scratch, we can’t eat it without listening to her list off exactly where every ingredient came from. She’s also a big baker, so we grew up eating all different kinds of experiments in her breadmaking — dill bread, braided bread, chocolate bread. Whenever she baked, my mom always wished she could use local grains and flours. New England produces oats, rye, wheat, and buckwheat, but to the average consumer, they were cost-prohibitive. And in most cases, locally grown grains have never been available in Maine grocery stores, or even co-ops — until now.

In the winter of 2013, Maine Grains opened in an old county jailhouse in Skowhegan with the aim of milling local grains and selling them at an affordable price. They use a traditional stone milling process and work with local grain farmers to get their products out to the public.

As any baker knows, altering your ingredients changes what comes out of the oven. In an effort to use these local grains, our bakeries have had to modify their recipes to correctly incorporate Maine grains. In many other parts of the country, big players may not be so willing to work with the local farming community to create mutually beneficial relationships. But in Maine, that kind of attitude prevails.

If you love carbs and you’ve been to Portland, you’ve probably tried something delicious from Standard Baking Co. on Commercial Street, or maybe you’ve waited in line for a fresh Scratch bagel across the bridge in SoPo. Both of these popular companies are making it a priority to use local grains and flours, and there are many more.

And since 2007, Maine has hosted the Kneading Conference in Somerset County — a county that fed at least 100,000 people with its locally grown and milled grain until the 1880s, before grain production migrated to the year-round growing potential of the Great Plains. The success of the Kneading Conference and its workshops is just one example of how people are coming together at the local level to rebuild a lost infrastructure.

Our restaurants have been embracing the local food movement for decades. 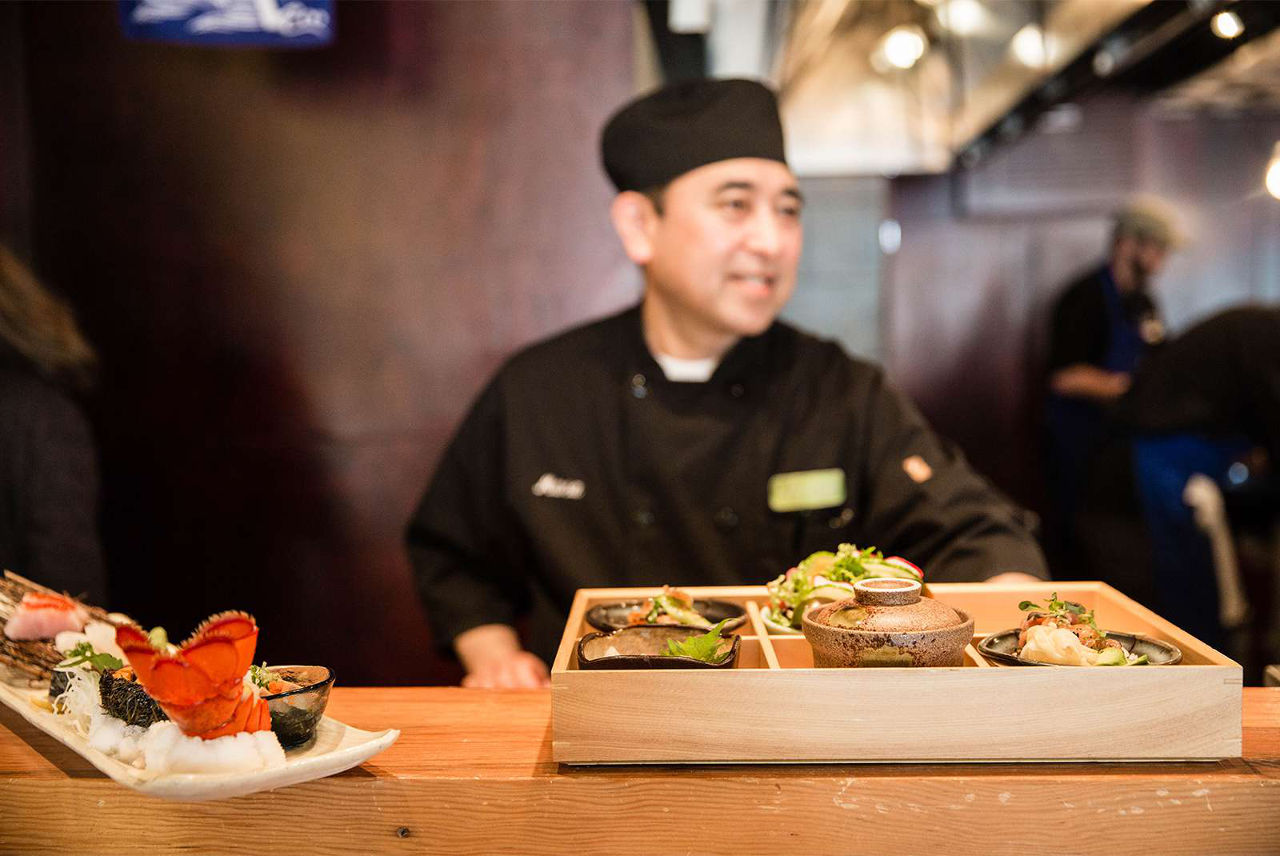 “Local food” is often defined as food that’s been grown less than 100 miles from where it’s being consumed. In Maine, that’s a pretty easy challenge to take on; we have 1.45 million acres of farmland to work with. Because there’s really no excuse not to, restaurants have been making local food a priority for quite some time. Patrons and restaurateurs know there are many economic and health benefits to eating locally sourced food — but we also know it just tastes better.

There are exceptions, but many of our best restaurants use local suppliers that distribute Maine-made foods and ingredients to anyone who wants them throughout the state. The results can be sampled at spots like:

From the mountains to the coast, big cities to small towns, the local food movement defines Maine’s culinary landscape.

Maine’s craft distilleries have always had a local focus. 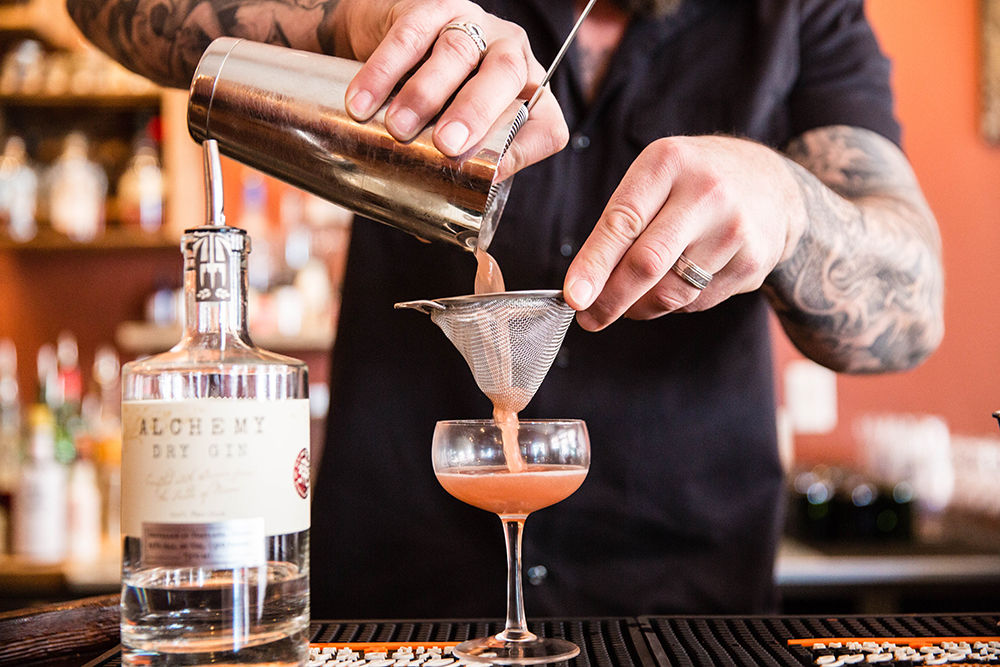 Even though Maine was pretty much the first state to get on the Prohibition bandwagon back in 1851, we have a pretty good handle on our spirits. And this is another area where an emphasis on the local comes to the fore. Seven craft distilleries have opened across our state since 2005; perhaps the best known outside our borders is Maine Distilleries, makers of Cold River Vodka. It’s triple-distilled in a copper pot using Maine potatoes and water from the actual Cold River. Maine Distilleries also handcrafts a Cold River Gin, which, in addition to Maine potatoes and river water, is distilled with a special blend of botanicals. It’s a uniquely herbal-tasting gin that’s not overwhelming on juniper or flavored like a cucumber.

There’s also Tree Spirits in Waterville, a winery and distillery that sources from local farms and is responsible for New England’s only absinthe. And Portland’s Maine Craft Distilling, created by Mainer Luke Davidson, produces quality whiskey, gin, moonshine, and rum. They use local agricultural products like barley, blueberries, and even carrots. In fact, their Black Cap Barley Spirit is 100% Maine-made, from the locally grown barley to the maple charcoal it’s filtered through.

MOFGA and The Good Life Center are keeping our state on track and following in the Nearings’ footsteps. 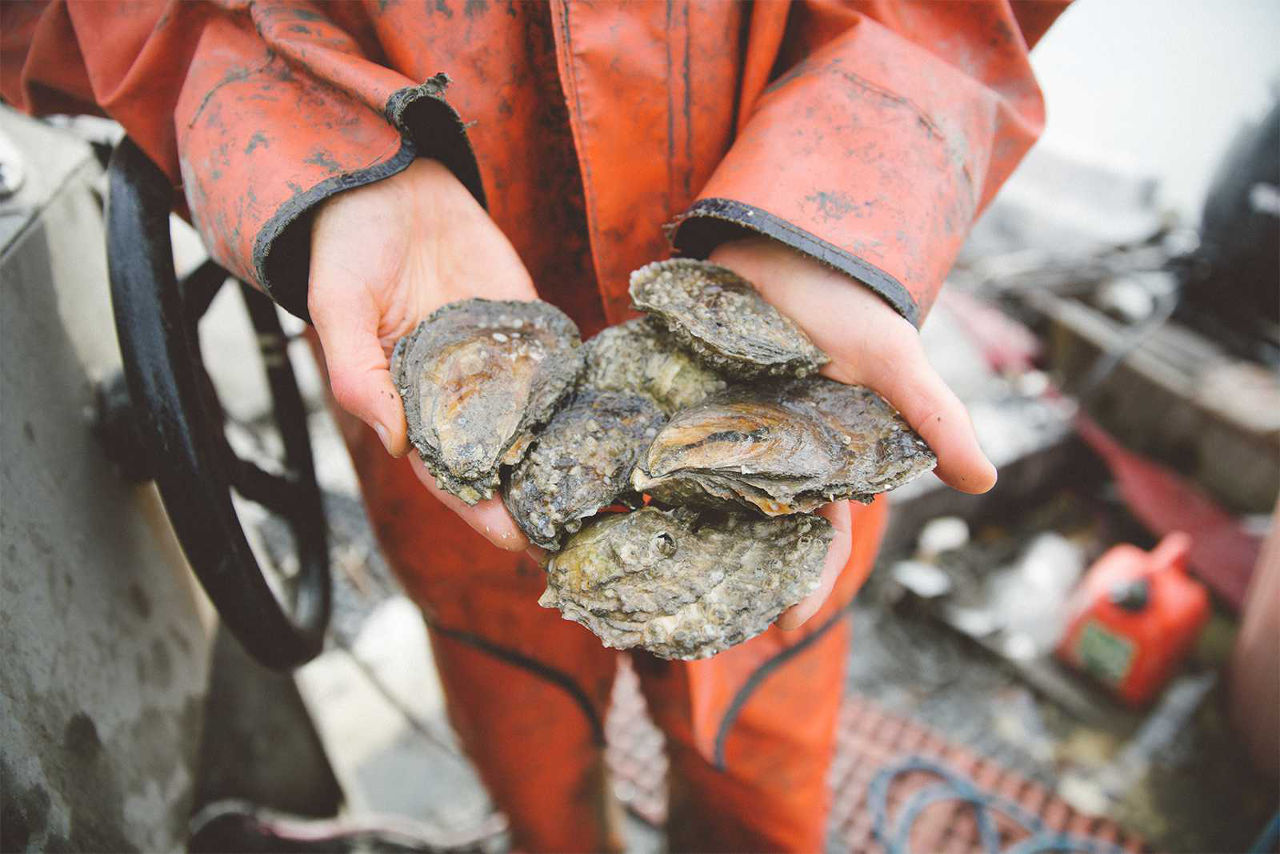 I grew up going to MOFGA’s Common Ground Fair every year. While my parents attended workshops on stone building and beekeeping, my sister and I were sliding down a hill on a piece of cardboard. Twenty-seven years later, the Common Ground Fair hasn’t changed too much. The values, lessons, and concepts are all the same, which is interesting considering how much our modern society has shifted away from simplicity — you can’t just hand a kid a piece of cardboard anymore; you’ve got to hand them an iPhone.

According to MOFGA’s records, 65,098 people attended the fair last year, and it’s become an ultra-popular thing for tourists to actually plan their vacations around. Although it was a little easier to get around when I was a kid, and the line for hand-cut french fries was significantly shorter back then, I’m pleased to see so many people taking an interest in keeping their own gardens, raising their own livestock, and building their homes with the environment and their own labor in mind — just like Helen and Scott Nearing did when they began homesteading in Harborside. (Although if you’ve read any of their books, you know the Nearings’ opinions on keeping animals.)

And the homestead Helen and Scott Nearing began in Maine lives on today as The Good Life Center on Forest Farm. The five-acre property opens every year to the public in early summer and offers workshops, presentations, youth programs, and an annual residency, which often goes to a young couple. You can visit and see for yourself the stone structures the Nearings built entirely by hand, from materials they came by locally. It’s inspiring how people flock to this place, doing everything they can to find their own version of the Good Life — just like the Nearings intended.

For more, make sure to check out the Maine’s Local Food Movement issue of The Maine Thing Quarterly.

This post is proudly produced in partnership with Visit Maine.
Tagged
Food + Drink Restaurants + Bars Insider Guides Maine, United States
What did you think of this story?
Meh
Good
Awesome