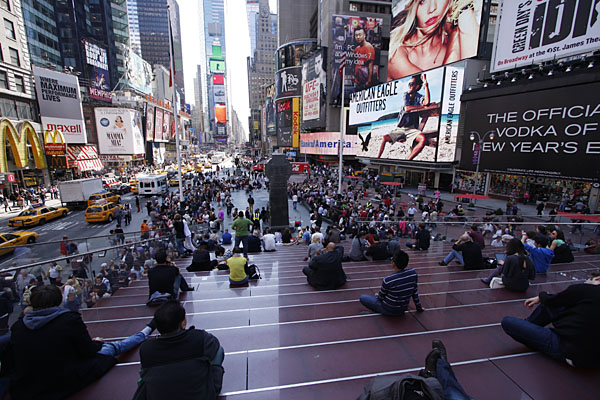 Home is where I hang my hat.

I FIRST READ about the attempted car bombing in New York’s Times Square late Sunday morning. It was one of those “wow, I was just there the other day” moments. And it was my first and closest brush with terrorism (or whatever it’s classified as). For three months I’m living in New York. As far as I’m concerned, it’s as close to home as anything else at the moment.

Maybe it’s testament to how resilient New Yorkers have become in the aftermath of 9/11, but I didn’t hear one peep about this until a good 16 hours after the event. And we were out Saturday night amongst “the people”. Or, it could just be testament at how little attention we pay to the news.

Regardless, since then I haven’t heard much about it other than when I made the bad decision to flip on the tube for some morning telly. Some New York politician was on, talking about how Obama needs to send more money this way to increase security. The message I came away from watching him was, we should be afraid. We should be VERY afraid.

Which is pretty much why I don’t like watching the news. Especially American news.

Seriously. What are the odds of getting caught in the middle of a terrorist attack? Less than two months ago, an airplane crashed in Georgia killing a guy who was just out for a bit of a jog. How’s that for odds?

The other night, my wife and I took a wrong turn down Flushing Ave and ended up in a dodgy industrial area, devoid mostly of people, except a few sketchy looking folks — one who said “watch your back” as we passed by, me carrying a $2500 camera slung across my shoulder. 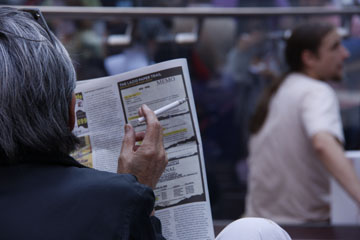 Death by smoking, or by terrorism?

I know I should be more wary of those situations than of potential terrorist attacks.

Driving, cycling, and walking in New York are potentially very dangerous activities, yet it’s done mindlessly on a daily basis.

How much more likely am I to be injured or killed cycling through an intersection where some impatient moron waiting to turn left decides to pass the person in front of them who’s also waiting to turn left (this actually happened to me here) than from gasoline, a few fireworks, and nonexplosive fertilizer stored in a car?

Getting “doored” has shown good promise here as inconsiderate drivers swing open their car doors into cycling lanes without looking. Walking across a crosswalk even with a walk signal is dangerous as drivers who are obviously in life-and-death emergencies speed around corners, trying to beat the pedestrians.

We’ll be here in New York for another couple of months. I’ll be more scared of being sideswiped by a passing bus than I will be of bombs.

What do you do on a daily basis that’s more likely to cause you harm than terrorism?