In Dol, a town named for the Croatian word for “valley,” we followed a dirt path to Marnel’s friend Jimmy’s house. Jimmy smiled shyly and grabbed the collar of his zippy black mutt while we climbed up to the rooftop patio.

Jimmy’s roommates were sprawled on a blanket smoking cigarettes. One of them, an Asian man named Taku, greeted me in English, and then began talking to Marnel in fast Croatian.

“How…how does Taku know Croatian?” I asked Marnel when the housemates disappeared to fetch glasses and — of course — booze.

“He lives here,” Marnel said. “Taku is here now three years. He actually is the one who own the house.” 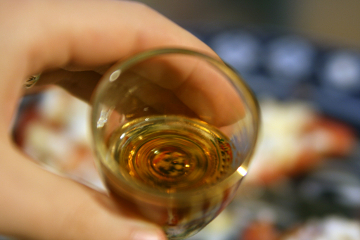 The boys reappeared with five glasses, a clear glass bottle filled with wine, and another, larger bottle with a fat cork.

“What’s that?” I asked. Everyone grinned.

“You haven’t had rakija yet?” Jimmy poured me a tall glass, about two shots.

I’d heard of this stuff — a Balkan specialty, often fermented from the skins and stems left over from wine making. It tastes about as good as it sounds.

“Urgh,” I managed after taking a swallow. Marnel laughed.

Taku wasn’t the only ex-pat living in Dol. Jimmy told me half the people in the village were American or British.

As I gingerly sipped the rakija, a neighbor from Seattle, Annie, joined us on the roof. She had dyed red hair, was somewhere past 60, and had lived in Croatia for 6 years, mostly as a part-time English teacher.

An hour passed, then two. The sun came out. The men rolled cigarettes. We all sipped rakija. Annie practiced her Croatian. Jimmy talked about buying land; he showed us, the next day, the plots on the Stari Grad Plain he planned to buy. Taku laughed about the time his parents came to visit from Japan. “They come to see, what is going on, what is he doing there?”

They laughed. “This,” they said, gesturing to the sunshine and bottles.

It was the booziest I’d ever felt on a hiking trip, but it was also the fastest I’d ever gotten to know a place, walking in an hour from hidden wine shops to the Greek-era fields where the wine was grown. And feeling everywhere that pervading sense of solitude: I still couldn’t see anyone out and about, walking the streets or driving into town or tending gardens.

“You know, I think I’ve seen only one other person since we left town,” I told Taku.

“I am surprised if you tell me you saw anyone,” Taku said. “Too early in the season.”

“Yes, I just fixed up the roof,” Annie was telling Marnel. “Would you like to come see?” Noticing me peering at them over my glass, she stood and gestured. “Come. Come see my house.” 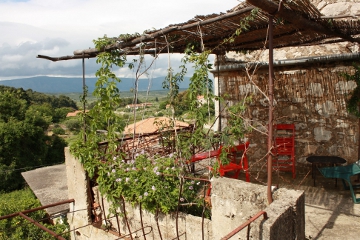 It looked like it had been built by the Lost Boys, if they had been armed with a sense of style and an arts and crafts store. The rooms and patios making up Annie’s house were joined by ladders and landings, instead of hallways and stairwells.

A Rube Goldberg system of pipes crisscrossed the roof, collecting rainwater and funneling it into a stone cistern where Annie used it to wash dishes. The living room and bedroom were fused into one space, with the bed and nightstand lofted above a ring of sofa chairs and stacks of books. In the kitchen, Annie impressed us with the multi-colored mats she had woven from plastic bags.

“Come see my new flowers,” she said, leading us up a wooden ladder to her rooftop. Pale violet blossoms burst from a long trough of plants. Leafy vines climbed an overhead trellis; I could see tiny grape buds.

“Look, up there, that is where we are hiking today,” Marnel said to me, pointing to the crown of the island a few miles away.

“That’s right, you guys probably have to get going,” Annie said. “You are lucky to have Marnel as a guide, Chelsea. He’s here a lot. He knows this island pretty well.” 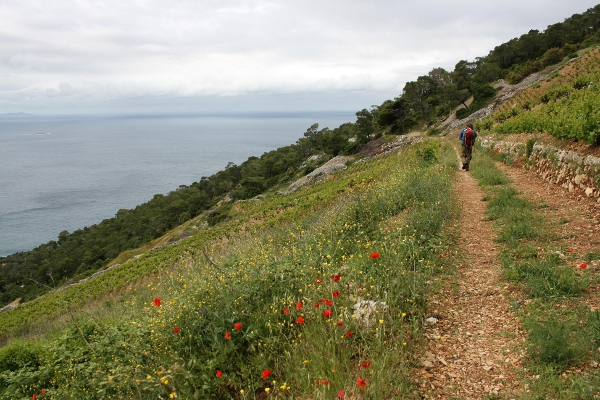 Find your own local guide. See which Matador members are currently in Croatia and hit them up with your questions.

Prev Page
What did you think of this article?
Meh
Good
Awesome
Bookmark
Posted In
Trip Planning