View all travel news
Top Destinations
Top CitiesView All Destinations
Trending Regions
Trending Cities
Load More
In 2010, the Hussin brothers began a 2-year bicycle journey across the US documenting stories of people “recycling the American Dream.” In this video they reflect upon the wisdom of the elders and the recklessness of youth.

IN AN AMERICAN ERA that’s largely settled into an ethos of comfort and security, it’s the freaks who most embody the spirit of individuality, innovation, and revolution that gave birth to the American ideal.

And we’re finding no shortage of freak cultures kicking around the United States. Many have roots in cities and cyberspace, but a yearning to build their own world seems to pervade the subcultural spectrum. To rediscover farming and foraging. To fish, hunt, and build homes without relying on an endlessly impersonal global society. Each movement manifests with its own sense of urgency and relevance, but going back to land is nothing new in this country.

There’s a tendency to trace it to 60′s counter-culture, but it was going on long before dread locked, chakra talking communes started dotting the American landscape. The settlers who trudged west and southward were perhaps the country’s first back-to-landers. Freaks of their time, they left the confines of the Northeast and Europe to homestead land and give birth to a new world. It was these unlikely radicals who slowly built a country of rambling roads, small towns, and expansive farmland where communities could thrive on their own terms, away from the heavy hands of government and industry.

And just as many urban and suburban dwellers today are rekindling their relationship with the Earth, country folk all over are lamenting a time when localism was nothing revolutionary. People raised chickens because they were hungry. They farmed organically because petrochemicals didn’t exist, and lost a good deal of their crop in the process. Cooperative living and radical self-reliance weren’t luxuries of the hippie class. They were necessary to survival. And the many days it took to get from town to town in a wagon or on foot was a grueling journey, fraught with danger. A far cry from the feathery romance of our bicycle trip.

But who were these people? We hopped on The Natchez Trace Parkway up in Tennessee to find out, heading south and finally escaping the relentless noise of billboards and strip malls. The steady tunnel of quiet trees seemed to breathe with us as we rolled through forest and modest farmland. Spring hit quickly, sending us into still-icy streams and slowly browning our skin. But as our own bodies began to wake up, the blessings of winter started fading. Our two main sources of food — roadkill and dumpsters — were quickly going out of season.

But it turns out some of this green stuff growing everywhere is food. A forest begins as a forest — a mysterious heap of growth with no beginning and no end. But as you go deeper inside, it morphs into a subtly interwoven organism and an elusive buffet. Yes, some of the dishes are poisonous. Most of them are indigestible or unpalatable. But on that rare occasion when your eye catches a patch of wild mustard greens or oyster mushrooms, the taste of the forest creeps all through your skin.

Blinded by the promise of comfort and availability, people failed to appreciate that their entire culture was at stake.

This forest was once foraged by large animals, and the Native Americans who followed them blazed the first footpaths of The Trace. As settlers flooded the region, the path was widened drastically, and wagons slowly trudged through the mud to trade and build. The interaction between the natives and the transplants swelled with conflict, until tensions finally culminated in the mass exodus of the tribes to land that is now Oklahoma. Many didn’t make it.

We were eager to absorb ourselves into the land’s history, but the endless nuances of our inheritance had been reduced to paved roads and painted signs, written by the victors. We read about disease and war. About the ‘education’ and displacement of natives, and the painstaking establishment of new settlements. Some signs even had the audacity to inform us that if we had arrived a couple centuries earlier, we would have been offered a hot meal and a warm bed.

Pre-industrial life in the countryside was hard, and as globalizing technologies advanced, small towns accepted them with open arms. Automobiles meant faster and easier travel. Factory farming meant cheaper, more diverse food. Television was a window to the outside world. But it was all embraced in short sight, and the ruins of rural America are haunted with regret. Blinded by the promise of comfort and availability, people failed to appreciate that their entire culture was at stake.

“Food can bring people together. If it’s good food, it really can. Might go to different churches and different schools, but once they here they all the same.” Henry paused for just a moment as the words sank in. “It’s hard to find home.”

Those five words speak volumes. It’s somewhat shocking that this place is even worth mentioning, that a restaurant in the South that serves southern food to southerners is somehow relevant to any kind of bigger picture. But it was the only one of its kind we found on the entire ride, despite the people’s deep longing for what they took for granted growing up. It’s mostly all gone now, the nuances of small towns that once pulsed independently, burned off by the ferocious flames of multinational industry. 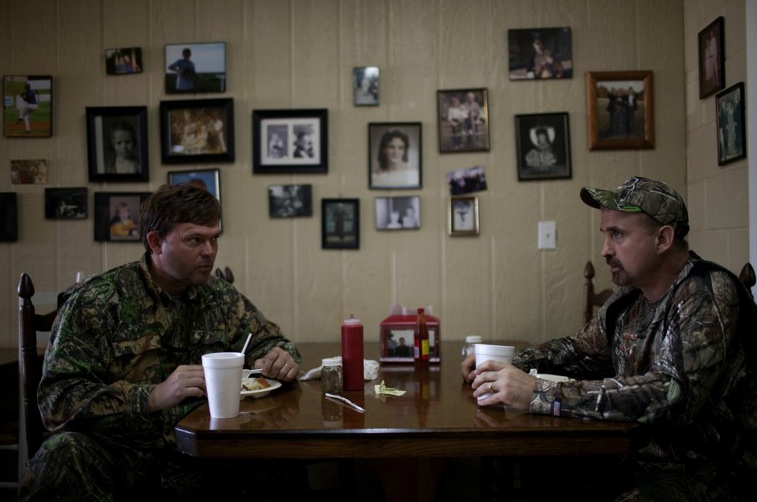 It’s a rather clever process. In the modern example, McDonald’s moves in, boasting jobs and hamburgers sold at lower cost and at two in the morning. But then the restaurant with a personal investment in the town goes under. Most of McDonald’s revenue gets sent elsewhere, the town becomes poorer and unhealthier, and in the end they’re living worse than they were to begin with. McDonald’s isn’t really any cheaper if its very presence impoverishes a community, but the illusion persists just long enough to get its foot in the door. By the time the town sees through the hustle, it’s already too late.

It seems to have happened everywhere. Small businesses couldn’t stay afloat and small-scale farming became economically unviable. Families spent their evenings at home watching sitcoms filmed in Hollywood rather than dancing to a jukebox downtown. As needs became fulfilled by organizations based far far away, local economies dried up. And with nowhere to take root, community and culture were short to follow. The options available to ambitious youth today are grim. Either get a job as a cog at The Dollar General and work your way up, or move away to chase bigger dreams.

These bikes have yanked us right from our comfort zone directly into worlds we never would have collided with otherwise. Barreling down the highway in a car, you can easily ignore the noise on the other side of the window, only exchanging pleasantries when paying for gasoline or asking for directions. But bicycles force you to feel every inch of every mile, and each little town you crawl through becomes a conversation waiting to happen. Most everybody seems thrilled to meet a couple of curious strangers rolling through town, and are eager to help out however they can. 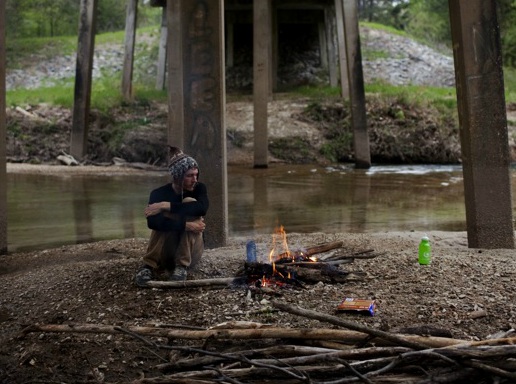 Like the little league coach who spotted us in the park on a cold night and unlocked the heated concession stand. And the stern cop who woke us in a cemetery. He just apologized for the disturbance and wished us well. And there was the morning on the Pearl River in the ‘no camping’ zone when we were asked to move our site closer to the diner. They wanted to make sure we were safe. People would buy us meals and tell us their life stories, inspired by our journey and intrigued by its mission.

And through it all, the one truth that hits us over and over again is that everybody’s more or less human. The flimsy walls we build up between conservative and liberal, old and young, between redneck, punk, hippie, yuppie, and hillbilly, burn down quickly over a hot meal.

It’s easy to snicker from the sidelines at the backwardness of the South. But these people have deep roots, and yearn for many of the same things as the more progressive groups we’ve documented. Only rural Southerners aren’t holding it all on a pedestal as an elusive utopian ideal — it runs deep in their blood. And if we can ever learn to get past the rhetoric, see under the surface, and join together in solidarity, we might just stand a chance against the much more powerful forces that weigh down on all of us.

Noah and Tim are creating a documentary called America Recycled. They are in the midst of a fundraising campaign in which all donations will be matched dollar for dollar, a prize for winning the USA Creative Vision Award. Fundraising ends April 7, 2013. To see this film completed, please donate at USA Projects.

* This post was published in its original form here.