Whenever I’m off the clock, the first thing I do is hit the road in my Jeep and drive throughout the jaw-dropping landscapes of the western United States. I’ve been lucky enough to spend a lot of time in some of our gorgeous national parks, and from classic roadside spots to fleeting moments with wildlife and dramatic weather, there is always magic to be found. Here are some of my favorite images taken in US National Parks out west — and the full scoop on how I captured them. 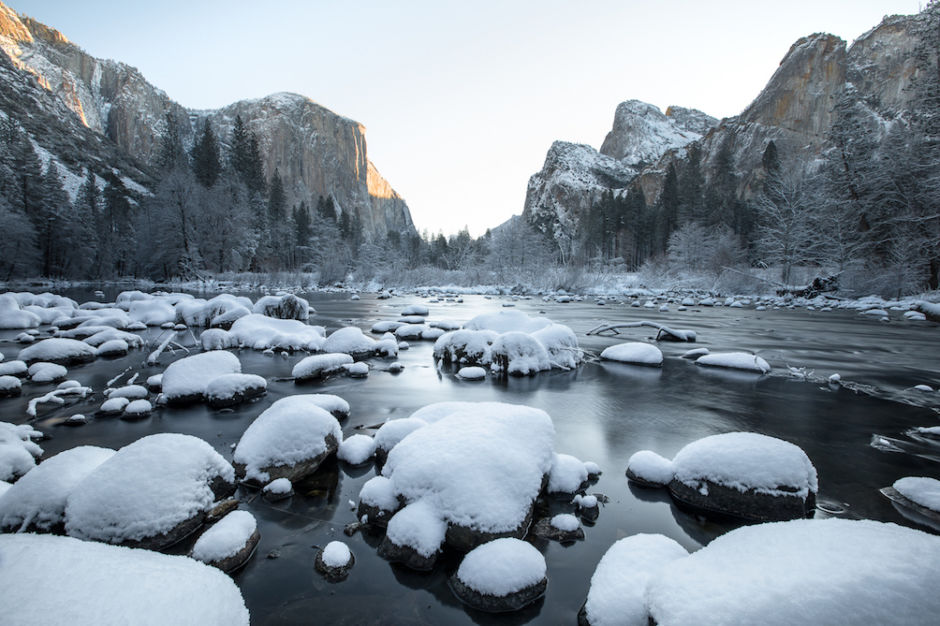 In late 2015, I spent a few days in Yosemite National Park in California after a light dusting of snow, and that got me obsessed with a winter Yosemite scene. I kept an eye on the weather this winter, and when I saw my chance in late February, I took it. I packed up and hit Highway 41 with gear, winter clothes, and no itinerary. Driving during the thick of storm was not ideal, but catching this at sunrise was 1000 percent worth it. 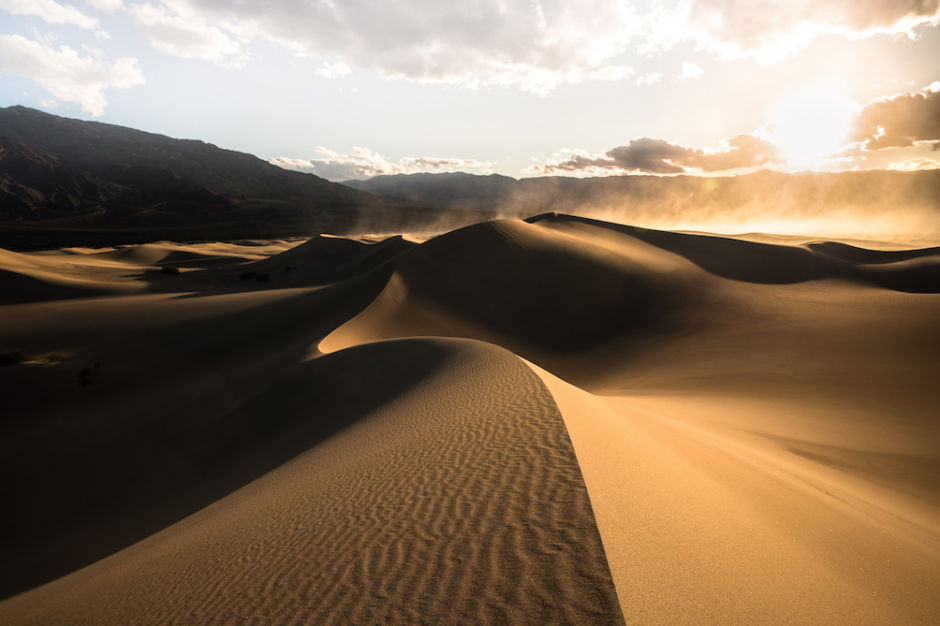 The Mesquite Flat sand dunes can be seen from the road in Death Valley National Park in California, but just thirty minutes of walking up and over the first dunes will bring you to swaths of untouched sand. The patterns are incredible, especially at sunrise and sunset, when sand seems to shimmer and the shadows catch. While this image looks relatively tame, shooting in 30mph winds was a major challenge; when I wasn’t struggling to get a good composition, I was trying to protect my equipment - and my eyes! I used sunglasses, a buff, and a bandana to shield my face from the sheets of sand blowing sideways across the dunes, and I used an extra buff to protect my camera, along with UV filters. I’m still finding sand in my camera bag. 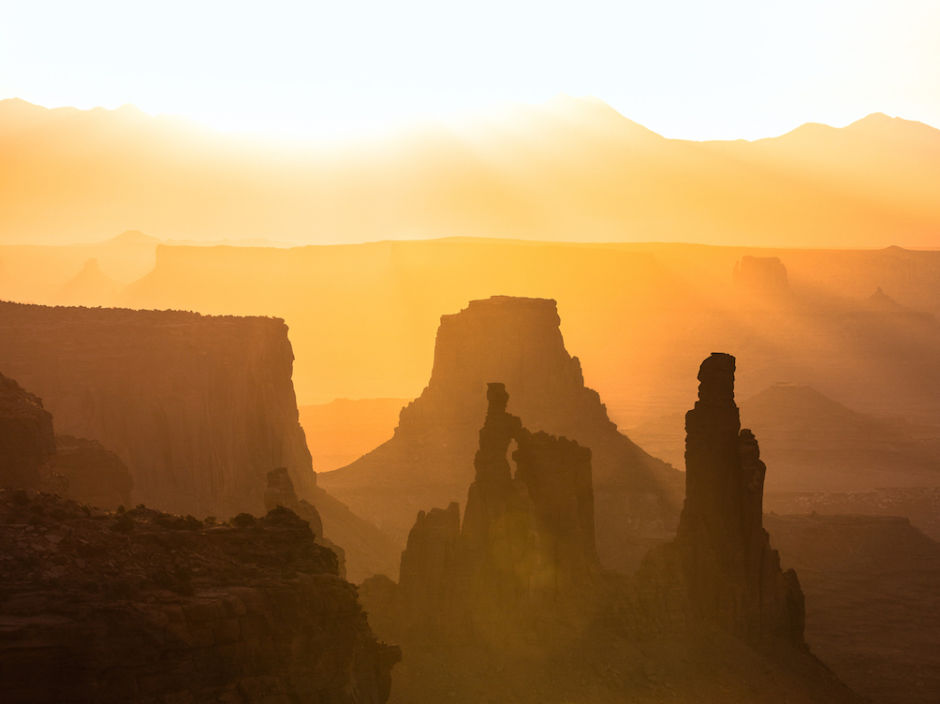 Tourists flock to Mesa Arch at Canyonlands National Park in Utah to snap a photo of sunrise peeking through the arch. When I went to photograph the iconic spot, the line of photographers made me want to try something different. I moved just 100 feet away from the crowd and focused on the layers in the valley below, which were glowing under the the early morning rays. 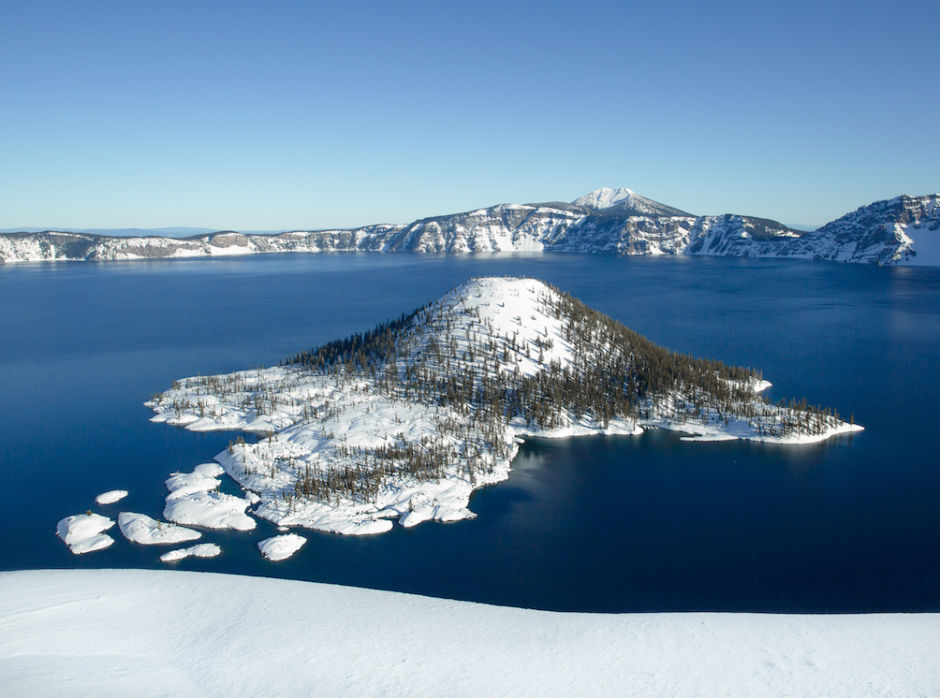 Snow on the Wizard’s Hat

In the summer, this view in Crater Lake National Park in Oregon is just steps from the pull-off, but in the winter, you have to put in a bit more effort to get here. I ended up snowshoeing seven miles (roundtrip) to find this vista point, and it wasn’t even from the top of the Watchman, which offers the best view of Wizard Island. 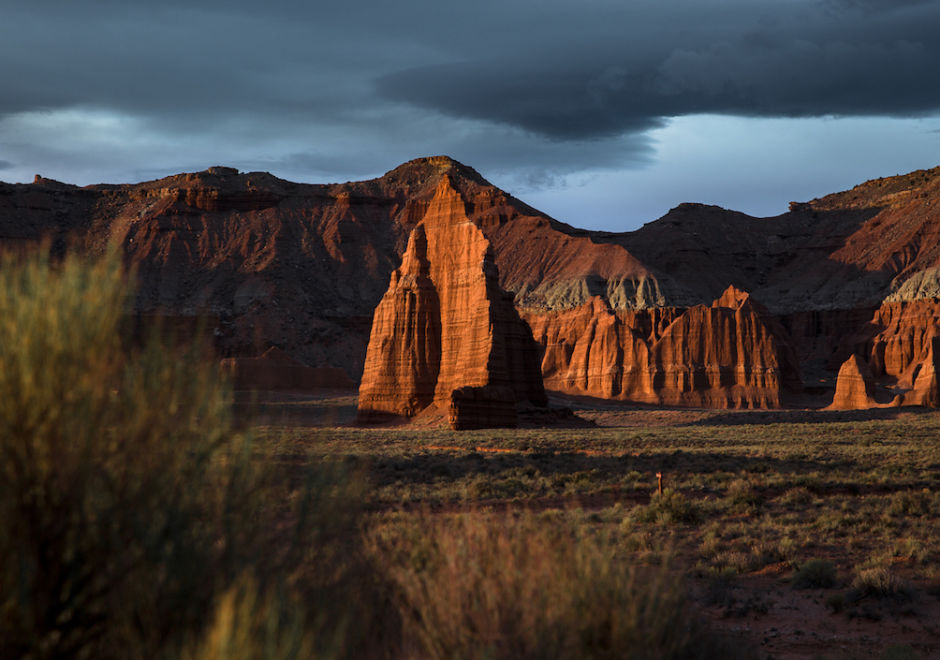 It’s one of those parks most people haven’t even heard of, and it wasn’t until last spring that I finally had the opportunity to swing through Capitol Reef National Park in Utah. I was blown away by the way the light hits the faces of the jagged rock formations. It’s a short drive to Cathedral Valley to see Temple of the Sun and Temple of the Moon, which are both worth the trek. Be sure to also swing by Gifford Homestead in the park for some homemade apple pie to wrap up a perfect visit. 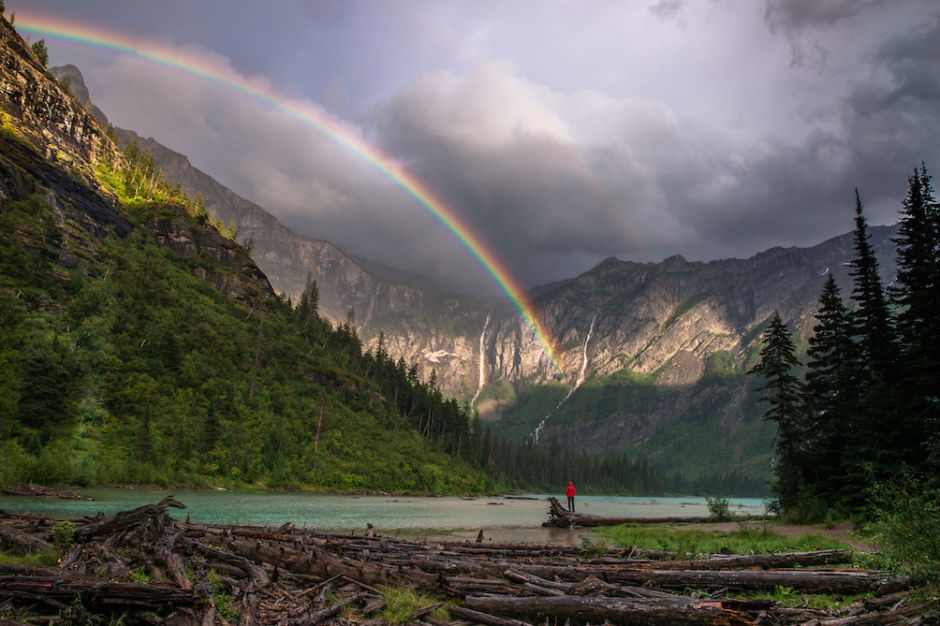 Who Doesn’t Love a Double Rainbow?

Glacier National Park in Montana boasts all kinds of amazing roadside spots, but as with so much in life, veering just a few miles down a trail can be well worth it. I hiked to Avalanche Lake this particular trip, and five minutes in it started dumping rain. Though we never saw the sunset we came for, we did get to the lake just in time to catch a vibrant double rainbow stretch across the sky. I nearly dropped my camera as I scrambled to get it out of my pack, and just a few minutes after I captured this photo, the color was gone. 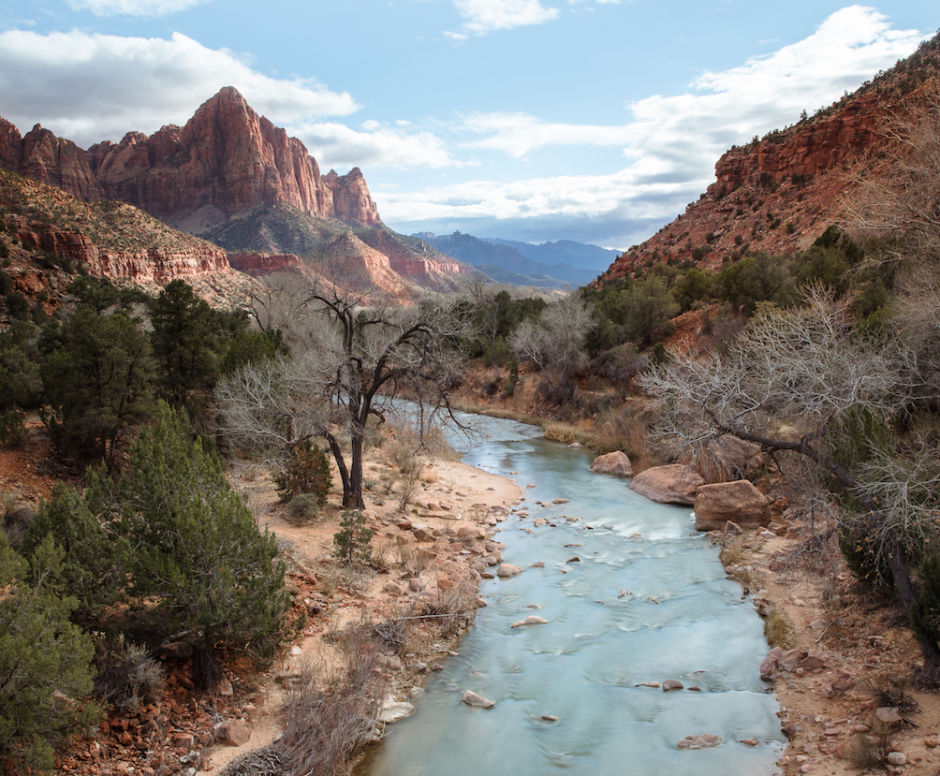 There’s a Reason Everyone Takes This Photo

Though I find the greatest thrill in capturing landscapes off the beaten path, I’m certainly not above shooting from popular vista points, either. I’ve hiked the Narrows from the top down pretty recently, but I hadn’t been to this particular section of Zion National Park in Utah since I was a kid. From the bridge, I watched a trio of deer cross the river below me, and yes, the rocks really are this red, and the water has a distinct aqua hue to it. Sadly, I was just passing through and I couldn’t stick around for sunset, but this is one of those places that wows no matter what season (or time of day) you visit. 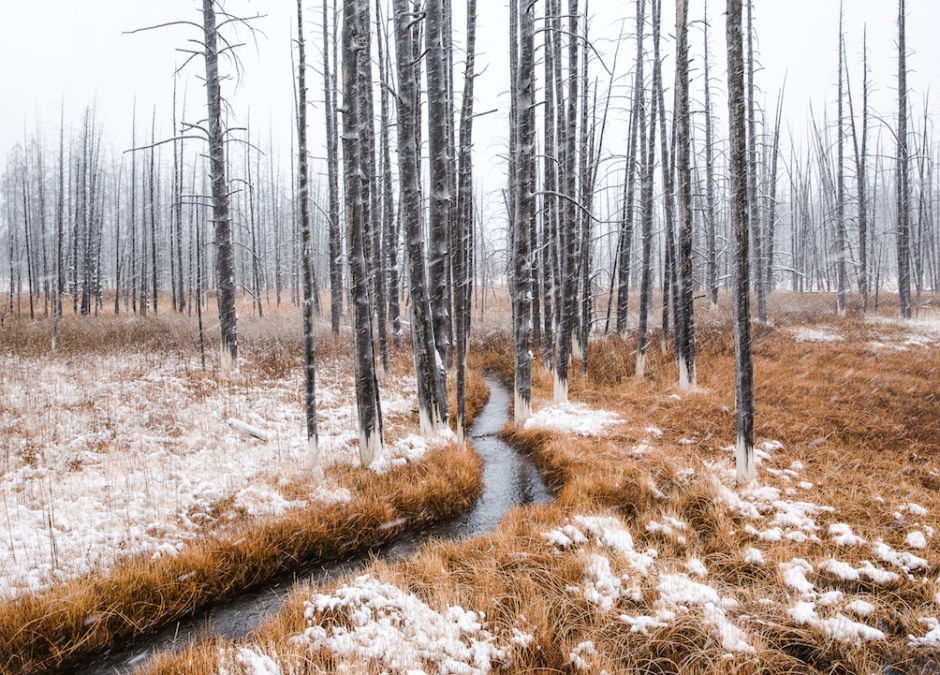 Beauty in a Barren Landscape

It’s easy to drive right by this patch of dead trees, as there is no parking area and it’s generally not something most people want to see in Yellowstone National Park in Wyoming. However, this is hands-down my favorite spot in the park, and I captured this shot during the first winter storm of the season. Though there was quite a bit of snow on the road and other areas in the park, the temperature of the creek, which is fed by a geothermal spring, remained warm enough to melt most of the snow that touched it. 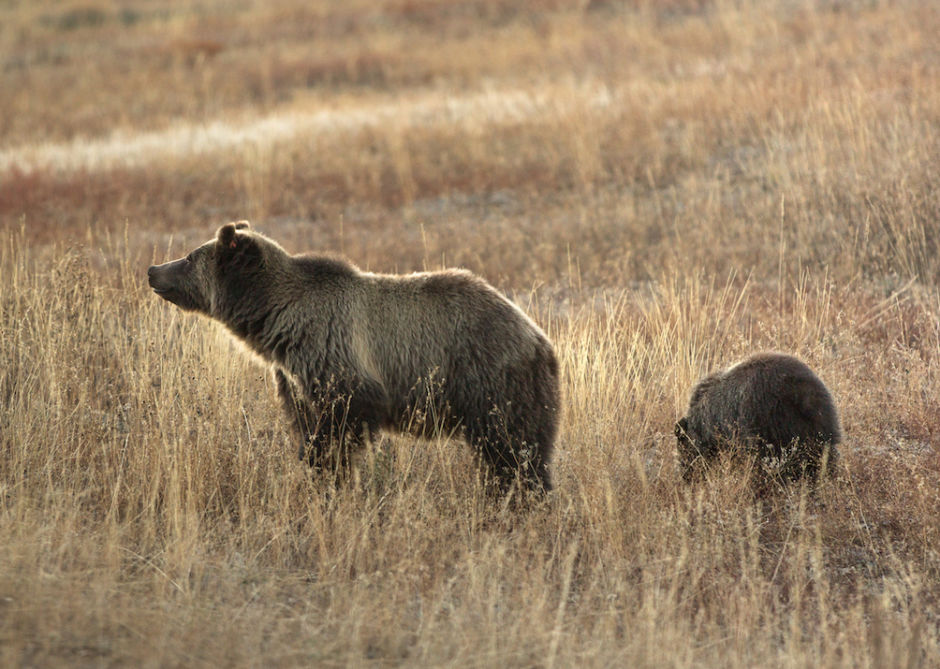 When I think of Wyoming, I imagine snow-capped peaks, glassy lakes, and the occasional moose. But getting to watch a mother grizzly (Bear #793, aka “Blondie”) and her two young cubs frolic through a field of golden grass in Grand Teton National Park was something I never expected to see. One of the cubs stuck by mom’s side for most of the afternoon, but the other was a bit more rambunctious, and took off a number of times. I shot this photo on a long lens from my car, and while there were a number of photographers keeping a safe distance from the bears, there were nearly two dozen people who were not following park rules and getting dangerously close. Just a reminder to please respect wildlife, and per NPS rules, maintain a distance of at least 100 yards (300 feet) from bears and wolves. 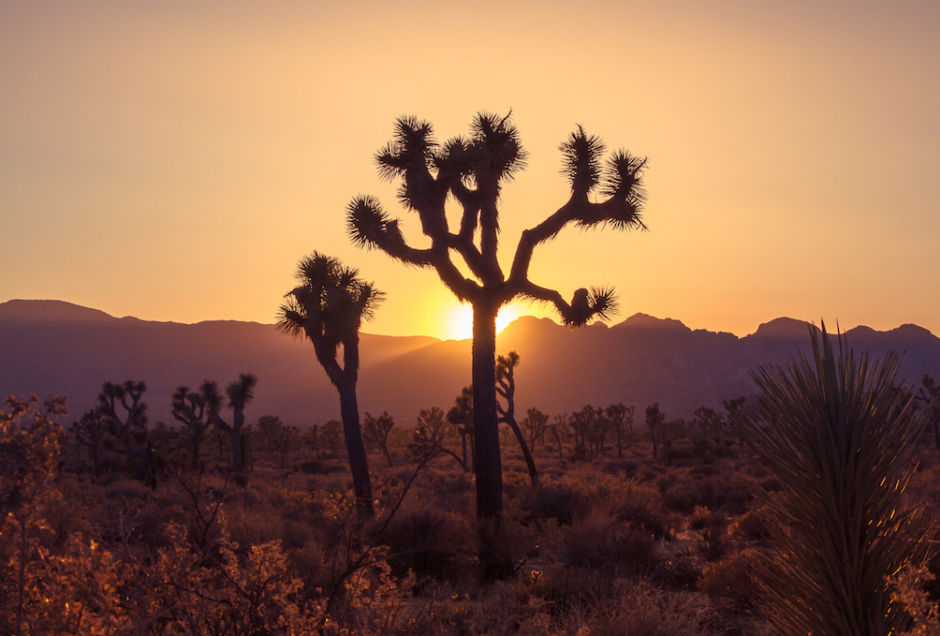 Joshua Tree National Park is just two hours away from Los Angeles, and it’s one of my favorite places to pitch a tent. In addition to the dry, desert air and temporary escape from the city, when the sun drops, all you see on the horizon is purple hills, a golden sky, and row after row of spiky Joshua tree silhouettes. This was the first sunset I ever saw in the park, and I honestly haven’t tried shooting sunset here since then, because I don’t know that I could ever top this moment.