Towards the tail end of an epic 3,300-mile rail journey across Europe, during which I’d haphazardly crisscrossed the continent in a generally southeasterly direction from Paris, I realized that Dubrovnik, where I was currently sitting beneath a blooming bougainvillea overlooking the rooftops of the fortified town, was just a short bus ride away from the famous city of Kotor, in Montenegro.

I’d heard nothing of the destination, but a quick Google showed a number of those “Best of” and “Undiscovered Gem” awards from travel guides across the spectrum. Usually, this is a reason to avoid a city, but it was the offseason, and I learned there was a train ride between Montenegro and Serbia that those in the know claimed was the best on the continent. So early the next morning, I scooped up my backpack, exited through the city gates of Dubrovnik, and boarded a rickety bus that was to trace a thin sliver of land south between towering peaks and the shimmering Adriatic.

What I found in Montenegro fascinated, confused, frustrated — and, at least once, terrified — me enough to cement it as one of my favorite countries on the continent. 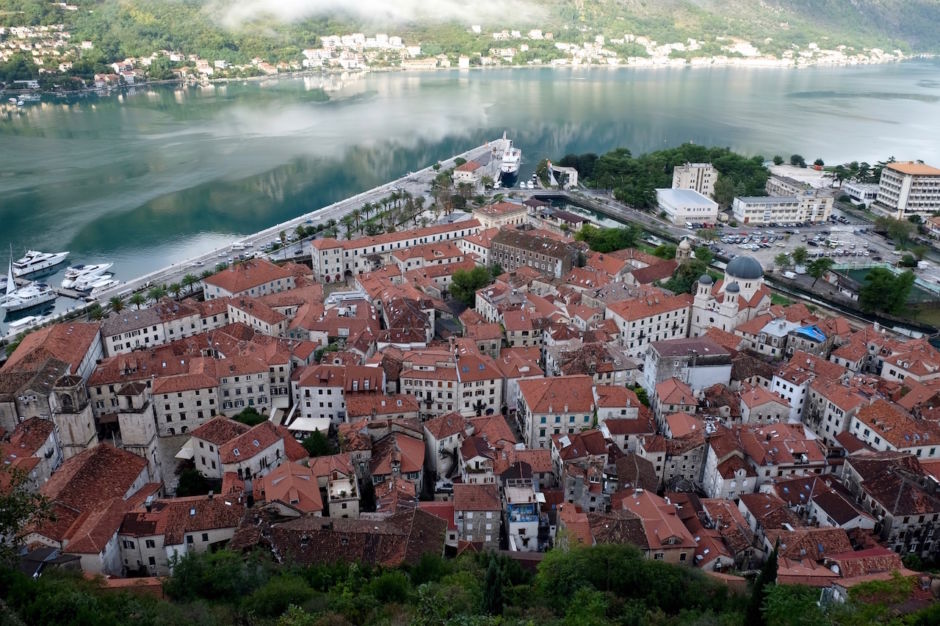 On the first afternoon in Kotor, a torrential storm dumped so much water on the small town and its surrounding mountains that a knee-deep river flowed past my Old Town apartment. The weather forecast predicted much of the same for the next day, with just a short window of sunshine in the morning. And so I rose early the next morning, determined to conquer the town’s most popular attraction - the vast walls and ancient fortress stretching into the mountains above the city that date back to Illyrian times. 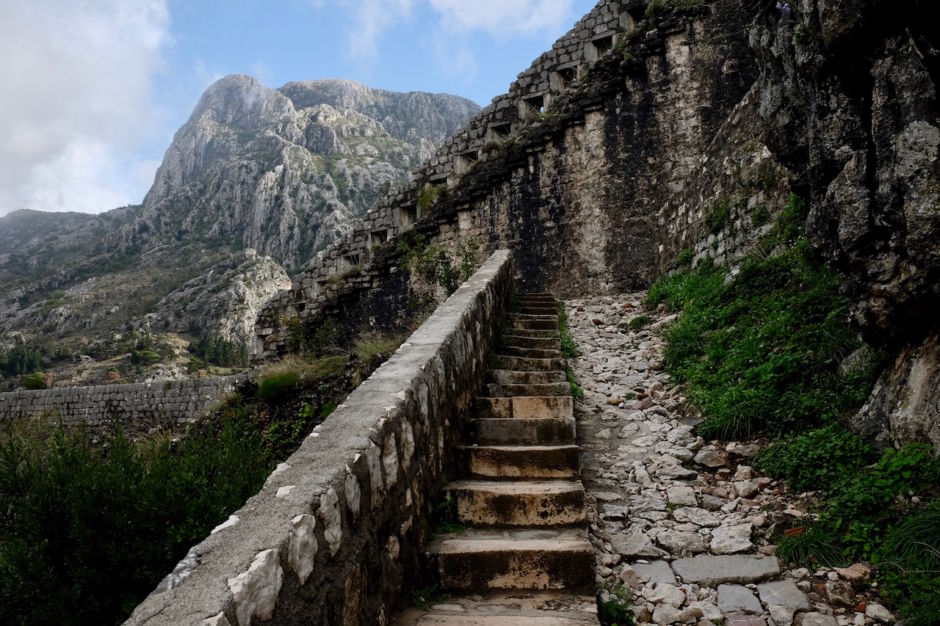 These days, the fortifications serve little practical purpose, but the crumbling bricks and sheer switchback pathways feel authentic and unspoiled. At times, they appear to blend in with the cliffs on which they’re built. But they also elevate you to a remarkable vantage point above the town, where you’re treated to panoramic views of the uniform rooftops, scuttling tourists, arriving cruise ships, and the fjord-like bay that they sail. 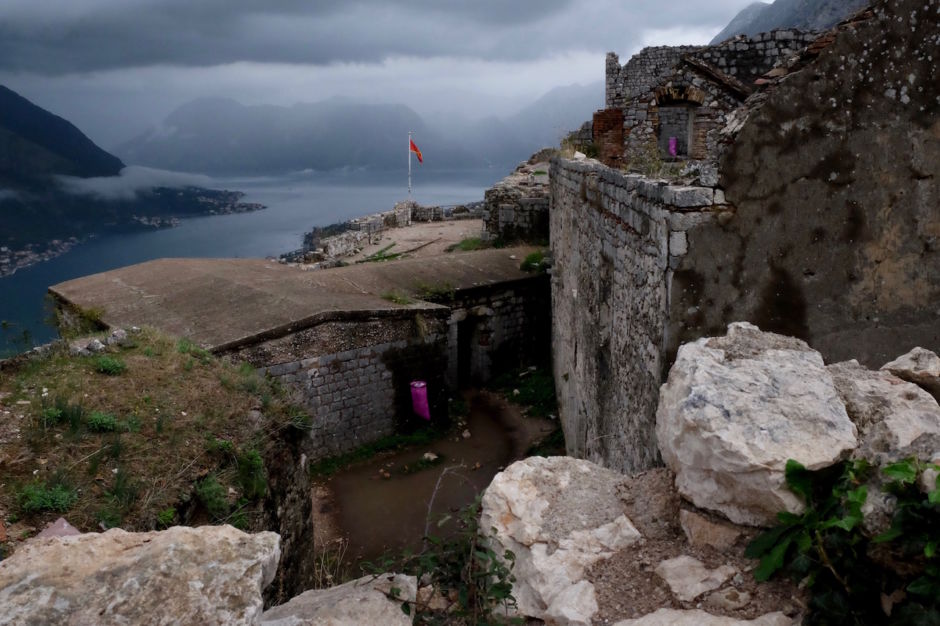 Top of the fortifications

Towards the top of the fortifications, a rumble of thunder sounded out from the mountains above. Almost simultaneously, the skies darkened and heavy raindrops began to thud into the earth at my feet. A once-listless Montenegrin flag fluttered slowly to life in the growing breeze. I looked down towards the town, now miniaturized by my altitude, and realized my only option was to hunker down in the dilapidated fortress and hope for the storm to pass. After 30 minutes of increasingly ferocious rain, I realized this was unlikely, and so I waded down the near vertical staircase in ankle deep water, ducking lightning bolts and cursing the fact that I didn’t take the receptionist’s advice: “Don’t ever trust a weather report in Kotor.” 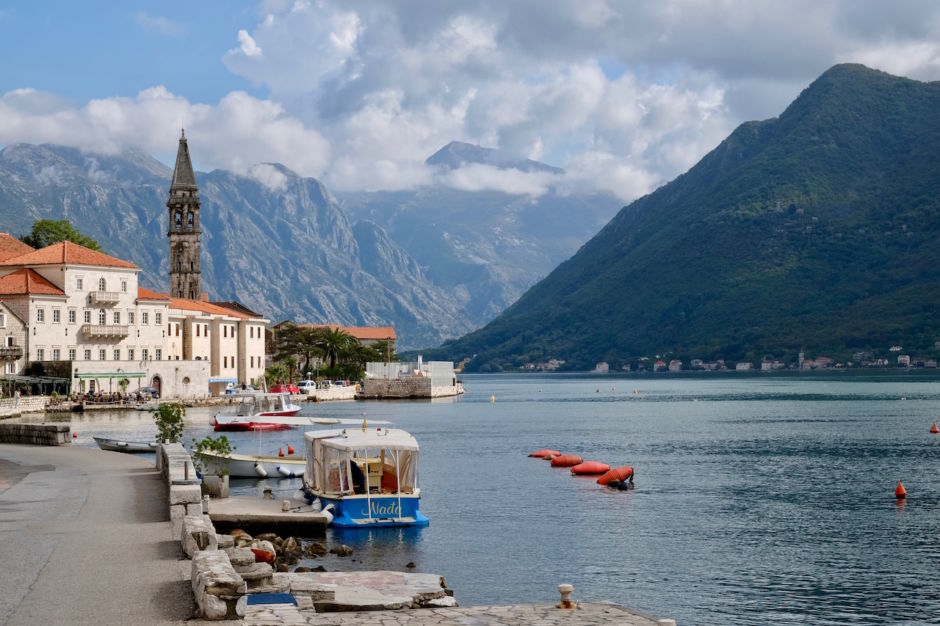 I spent much of the next morning drying my clothes with a small hairdryer I found in the apartment cupboard. But then the skies cleared once again, and I boarded a bus to the nearby town of Perast. This beautiful, tiny old town that looks like a missing piece of a Venetian puzzle sits on an idyllic stretch of the bay and offers easy access to two intriguing islands just a short boat ride away. 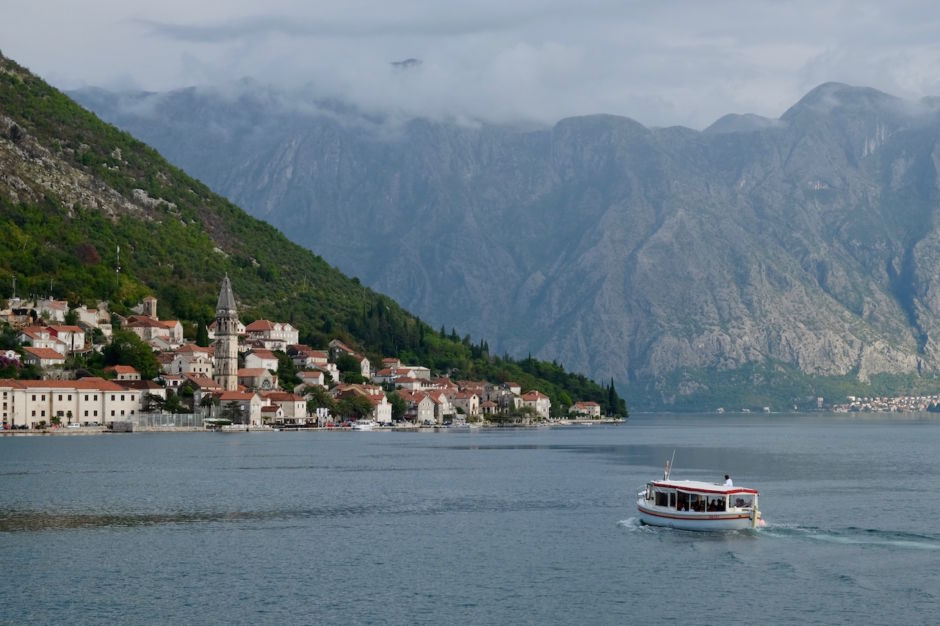 Boats to the island

Boats potter across the bay to Our Lady of the Rocks, an artificial islet steeped in mystery and legend, and home to a small Venetian-style church. From the road, it looks like it broke off from the mainland and floated into the center of the bay, and legend has it that the island is built upon ships sunk with stones to form a solid foundation. But it’s the boat ride to and from the island, costing just a handful of coins and taking only a few minutes, that offers the most dramatic views of the surrounds. 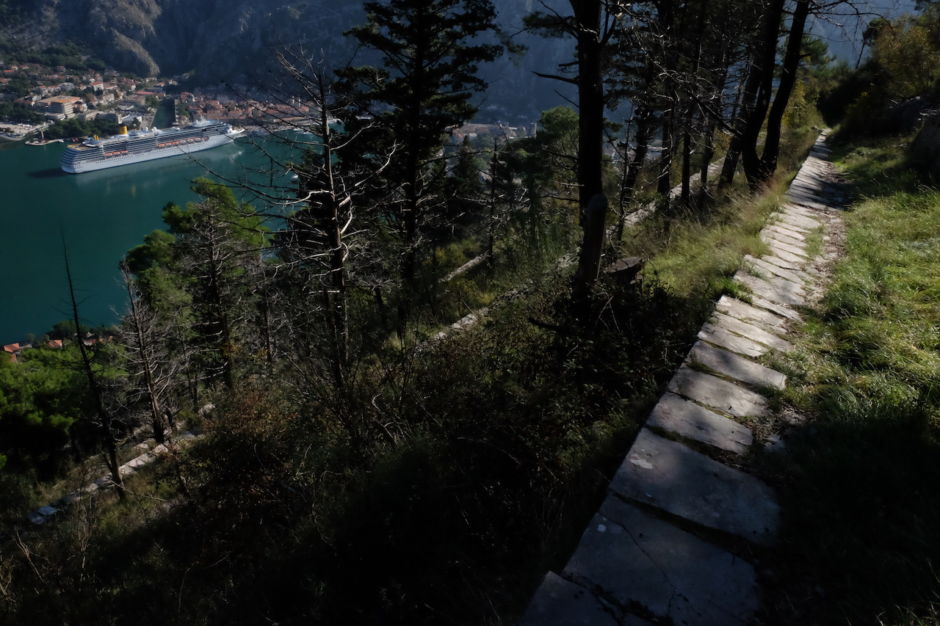 On my last evening in Kotor, I stumbled across a nugget of information that would result in one of my most memorable experiences of the last two months of travel. Apparently, one of the best preserved and abandoned Austro-Hungarian-era military bases on the continent sat on the hills above the town. The hotel receptionist’s eyes lit up when I asked him about the base. “You’re not supposed to enter,” he said. “I nearly died in there when I fell through a hole in the ground. But I’ll tell you the best way in. First,” he continued, pulling out a map, “you’ll need to hike this path on the other side of the town...” At sunrise the next morning, I set off and walked the steep switchback pathway through dappled sunlight with ever-changing views of the town and mountains on the opposite side until eventually, I reached the quiet and abandoned site. 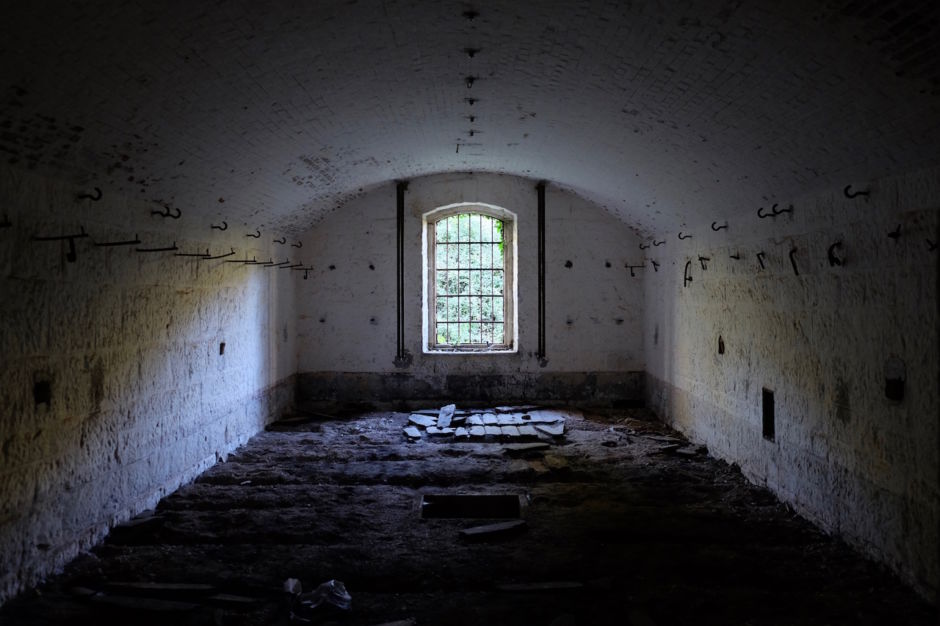 When I reached the silent summit I soon found what I was looking for - the hulking concrete mass of the military base, and the small window to enter it. I lifted myself up and onto the small stone windowsill and pressed my face into the darkness. Deep inside the base, I heard an ominous and repetitive drop of water echoing off the cavernous interior. I wanted nothing more than to turn back, but instead reached into my pocket, activated the torch on my phone, and dropped down into the interior of the military base. 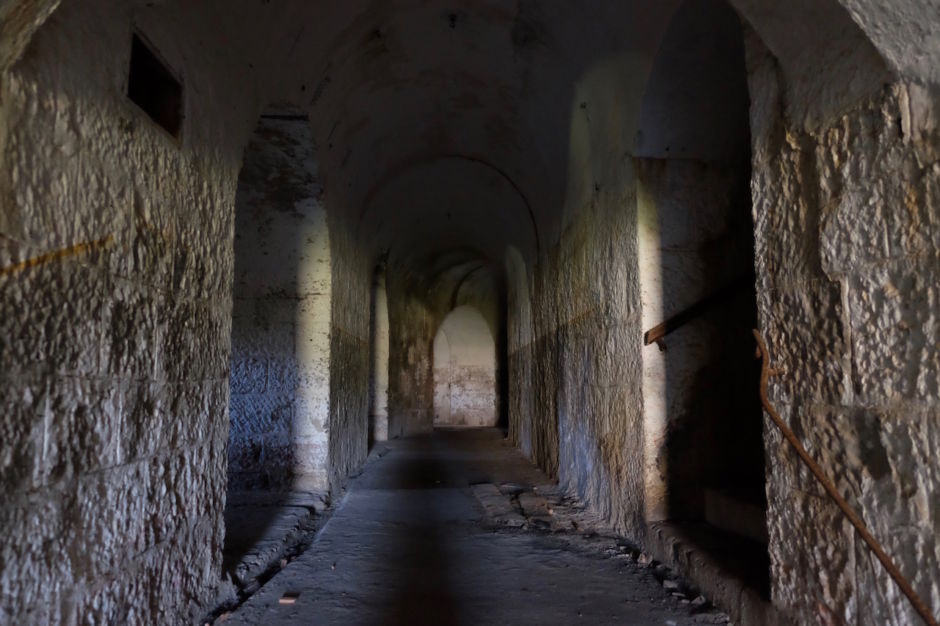 Almost immediately, I realized my phone torch was of little use, but I pushed on gingerly across the crunching gravel and through the labyrinthine network of tunnels, passageways, and up concrete staircases. As I walked in total silence through the base, the sound of the dripping grew louder, and I ducked large bats flapping towards down the dingy corridors and stepped around potentially deadly holes in the ground. I walked up flights of stairs into total darkness and found rusted casemates, motor turrets, and row upon row of eerily abandoned rooms lined with rusted hooks until eventually, more than an hour later, I realized that if I didn’t retrace my steps carefully, I may just get lost in this terrifying world. 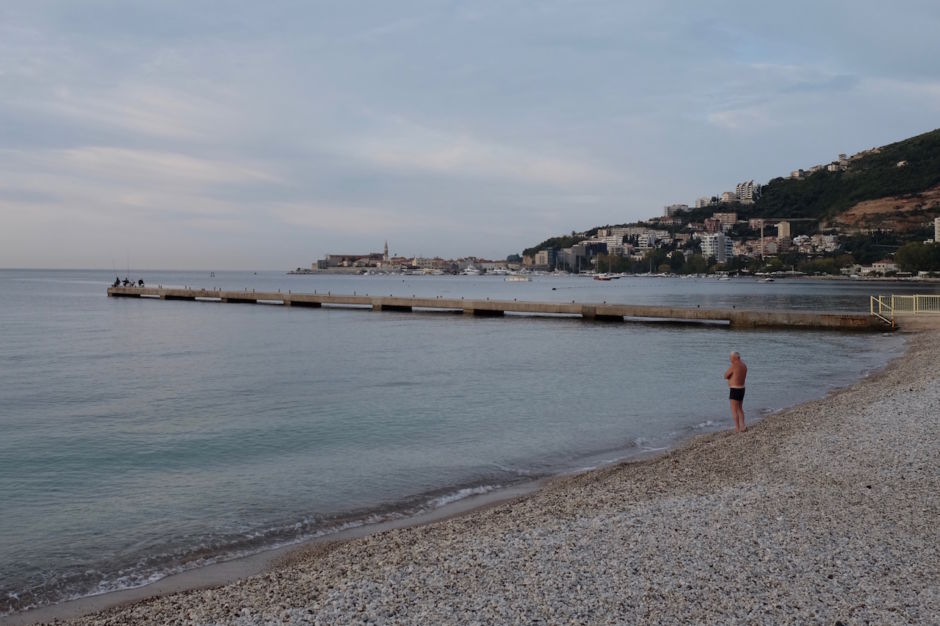 It would be easy to paint this town as a beautiful beach resort set on the shimmering Adriatic. But the reality, at least in the offseason, was anything but glamorous. Stray dogs and cats picked through litter on the stony beach as they walked between dilapidated beach bars. Rusted and crumbling jetties stretched out into the ocean. In the distance, a closed bungee-jump crane and platform stuck up into the hazy early morning sky, and a neglected mobile booth with ripped curtains and a hand-painted sign reading “Massage” hanging off-center made it feel as if I’d woken up to a nuclear disaster. Reviews and a row of luxury yachts close to the old town suggested that it may get a clean sweep for the arrival of rich foreign tourists in summer. But in mid-October, I was more than happy to bid this bizarre beach village goodbye after two long nights. 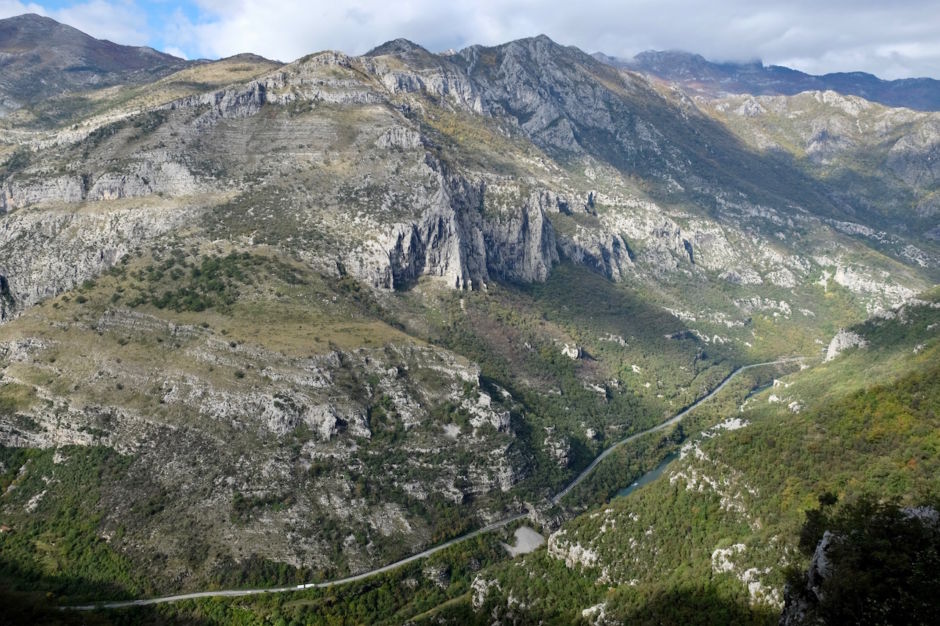 A week after arriving in Montenegro, I boarded my train in the small coastal town of Bar and headed for the Serbian capital of Belgrade. I’d read that this was the most dramatic train ride in Europe, and after gaining elevation on the slopes of the Montenegrin mountains just a few minutes into the journey, I realized that the claims were likely to be true. Large trucks on the road many hundreds of meters below provided some sense of scale to this engineering feat that once ran Tito’s famous Blue Train, but it was when we burst through a tunnel into one of the most incredible autumnal displays imaginable that I realized this was indeed the best train ride on the continent. 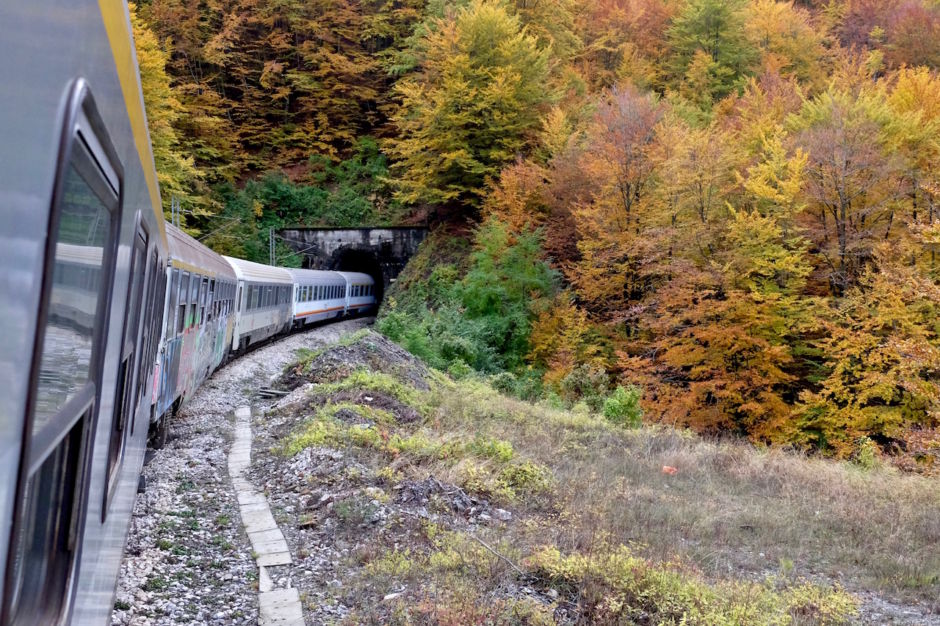 As the train journey progressed through the autumnal wonderland I didn’t want it to end. Several hours later, and at least two hours behind schedule, the scenery outside darkened and the no-frills carriages lost their appeal. But sitting in the unlit carriage with a handful of commuters allowed me the opportunity to reflect on a short but fascinating journey into this beautiful country.

GalleriesI Just Traveled 3,300 Miles Through Europe. These Were My Favorite Moments.
Tagged
Galleries Montenegro
What did you think of this story?
Meh
Good
Awesome

The Montenegro Express Is the Ultimate Fall Train Route Through Europe

Here’s Why Montenegro Is an Outdoors Paradise

I Just Traveled 3,300 Miles Through Europe. These Were My Favorite Moments.