Laboring over the swells of the Pacific Ocean, our boat follows the coastline of Costa Rica’s Osa Peninsula that rises out of the ocean wrapped in a thick carpet of lush tropical rainforest and framed by the sandy strips of wild beaches. Most of the peninsula is protected by Corcovado National Park, and the sheer expanse of its wilderness is staggering.

Corcovado, which has been described by the National Geographic as “the most biologically intense place on earth in terms of biodiversity”, protects over 400 square kilometers of old-growth wet forests that host an unparalleled abundance of wildlife.

Led by a local guide, we arrive at a deserted beach that serves as the entry point to Sirena Ranger Station — one of the only four areas in the park open to visitors.

In the next three days, we see some of Costa Rica’s most incredible wildlife, including a number of threatened species that the park is designed to protect. 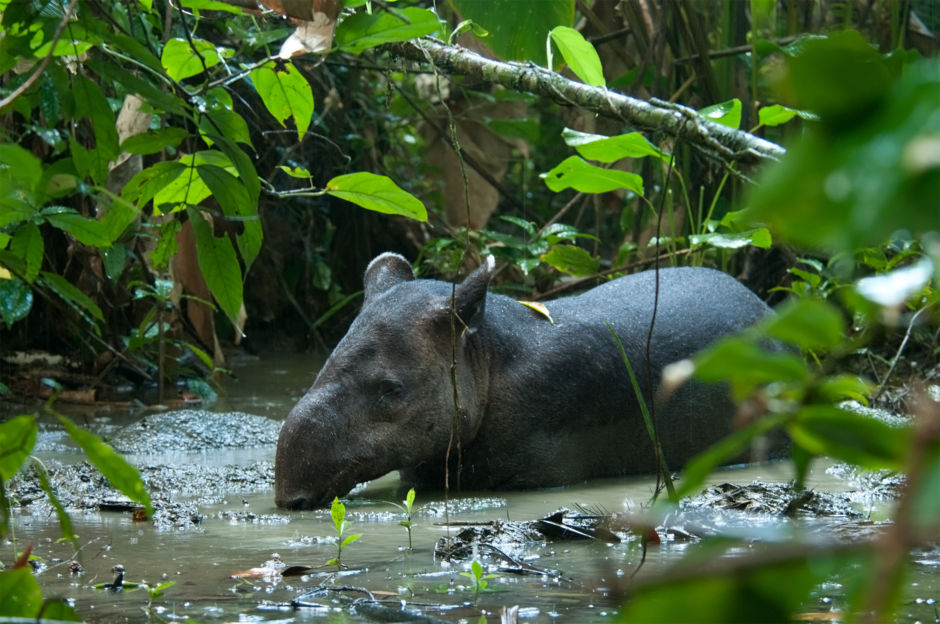 Within 20 minutes of landing on the beach, we are looking at the first endangered species of the trip. Two Baird’s tapirs are taking a nap in a shady puddle just off the trail that runs from the beach to Sirena Station. They allow us to approach the edge of their little swamp and sit with them for a few minutes under the light sprinkle of rain. 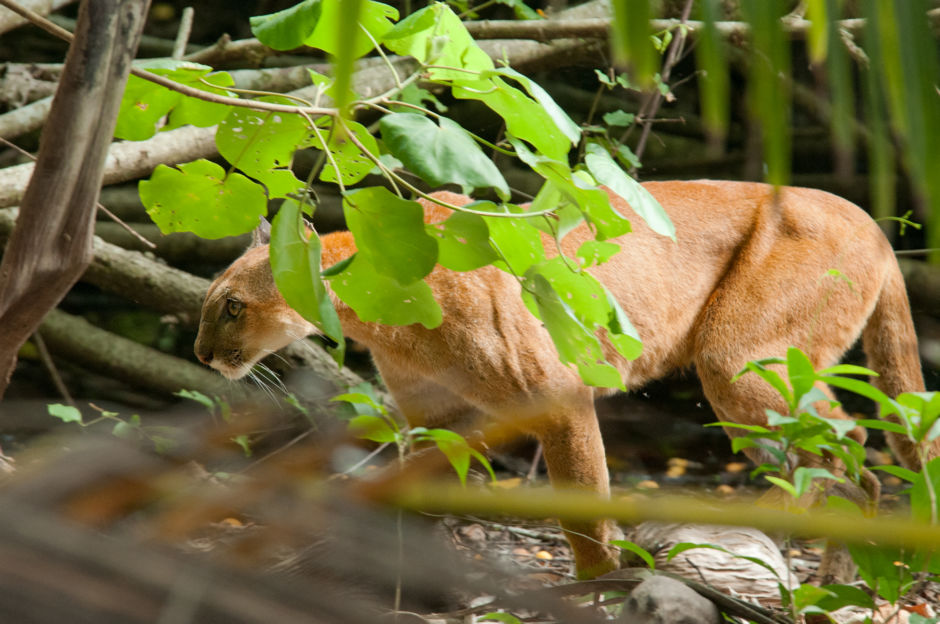 The following morning our guide leads us on a hike to Puma Valley - a tropical valley wedged between a series of wild beaches and a densely-forested ridge that runs through the centre of the peninsula. As soon as we walk into the valley, our guide grabs my arm and pulls me down into a crouch, pointing into the jungle. I look in the direction he is pointing and meet the intent stare of a Puma.
She appears undisturbed by our presence and after a minute’s hesitation continues on her way. For a moment, she walks across an open patch and we notice two almost-grown cubs following closely on her heels. 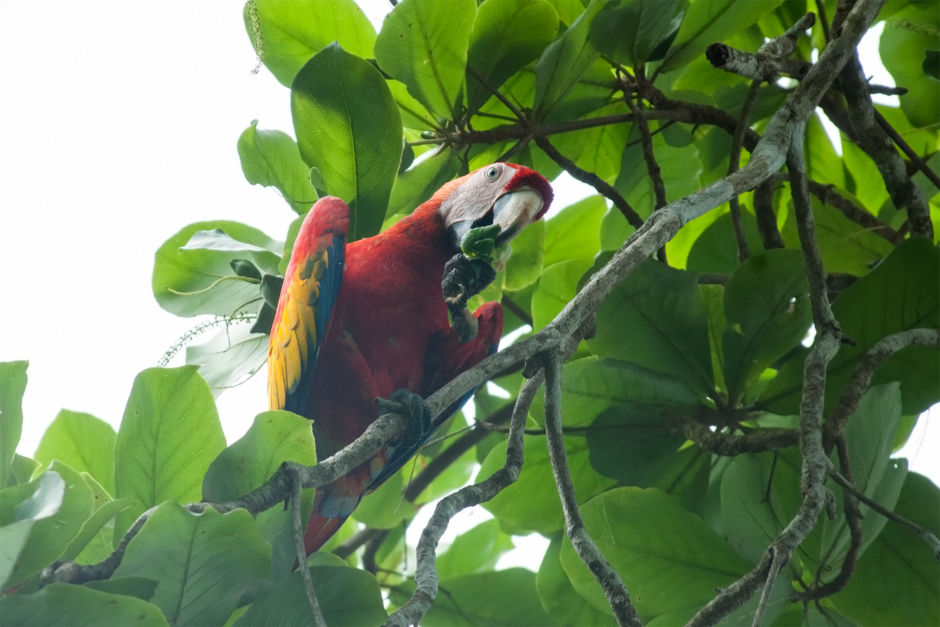 When the pumas disappear out of sight, we become aware of the raucous squawks in the canopy above us. Startled, we look up and discover a pair of vividly coloured Scarlet macaws feeding on the seeds and bombarding us with discarded inedible parts. 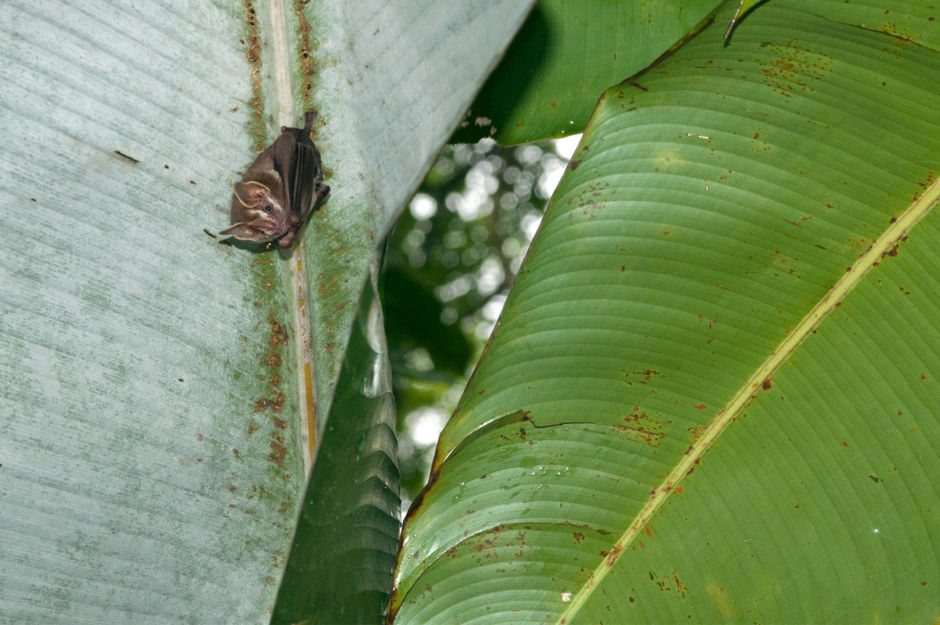 As we walk past a banana tree, our guide ducks under one of its huge leaves and finds a Tent-making bat snoozing in its shade. This curious bat builds its own home by biting the central vein of a large banana leaf until it folds in half, forming a V-shaped shelter that protects the bat from the sun and the rain. 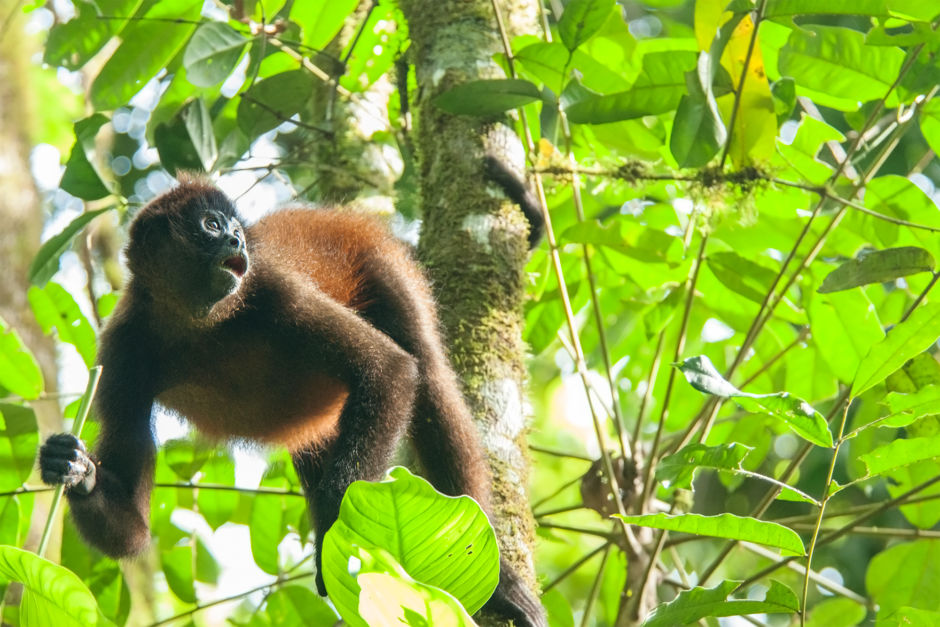 In the late afternoon, we find a group of the endangered Black-handed spider monkeys feeding on fruit at the edge of the forest at the station. Famously dexterous, spider monkeys have extremely long limbs and a prehensile tail that functions as a fifth limb. They hang effortlessly from the branches using their hands to rip open the ripe fruit and gorge themselves on the soft and sugary inner parts. 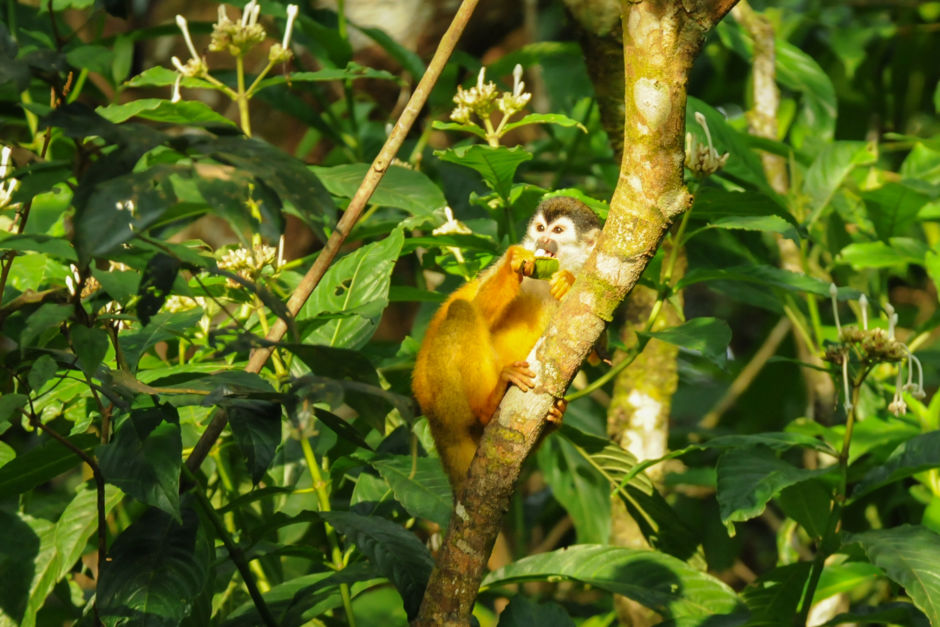 A group of cheeky Central American Squirrel monkeys joins the feeding party. They squeal and chirp as they move through the branches reaching for fruit and squabbling with each other, bathed in the warm light of the late afternoon sun. Their animated cuteness is one of the reasons the species is in decline – they are very popular in the exotic pet trade. 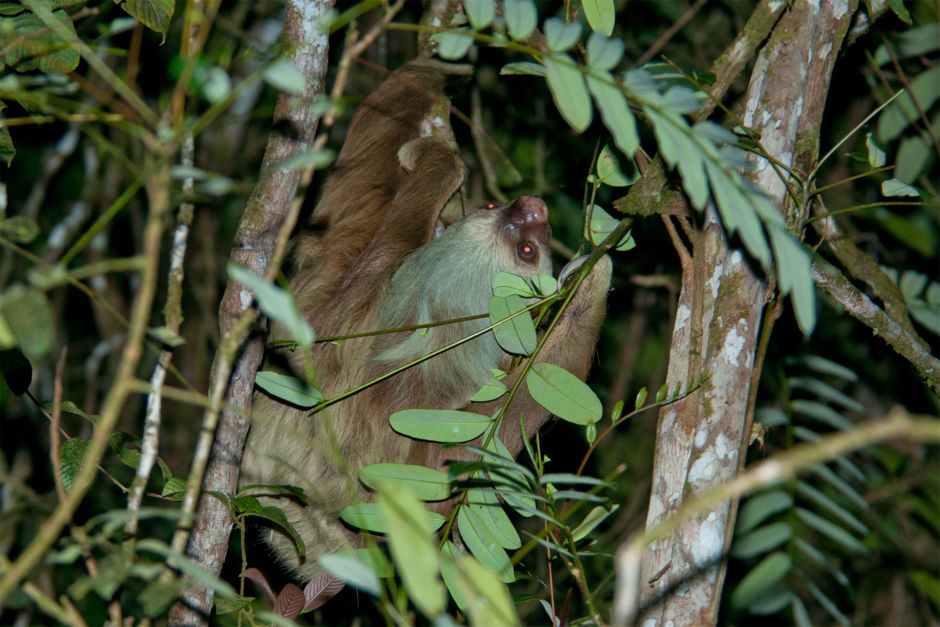 In the evening, a Hoffmann’s two-toed sloth visits the forest’s edge, moving through the canopy in a deliberately unhurried fashion. These shaggy animals are so slow that algae are able to grow on their fur. As a return favour, the algae give the sloth’s fur a greenish tint that helps the animal blend with its environment and avoid predators. 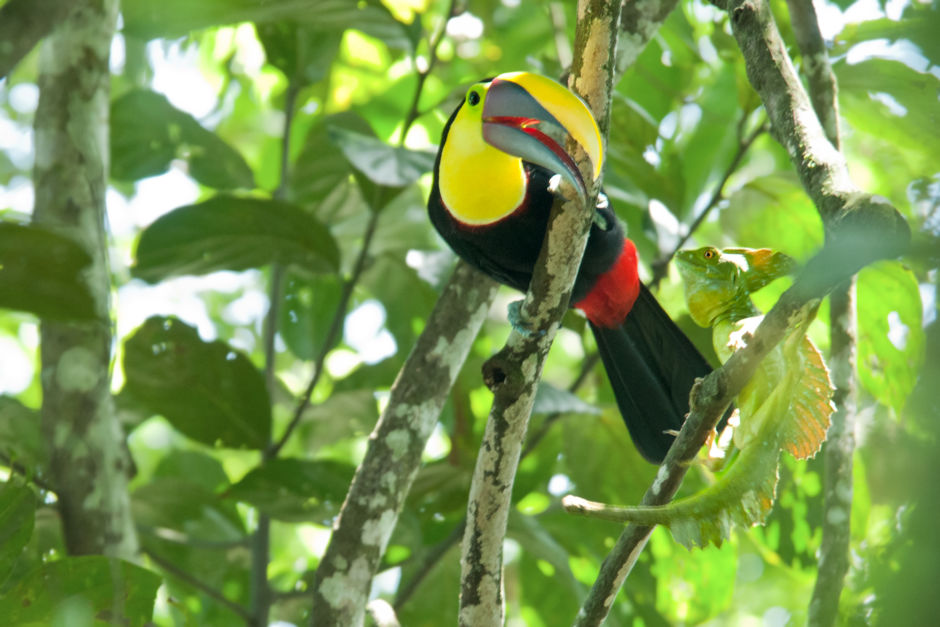 Early mornings at Sirena are dominated by birds. We watch a Yellow-throated toucan land on a nearby tree and become a little agitated in the process. On closer inspection, we notice a perfectly camouflaged green iguana that did not anticipate the toucan’s arrival and is now making a hasty retreat, away from its formidable beak. 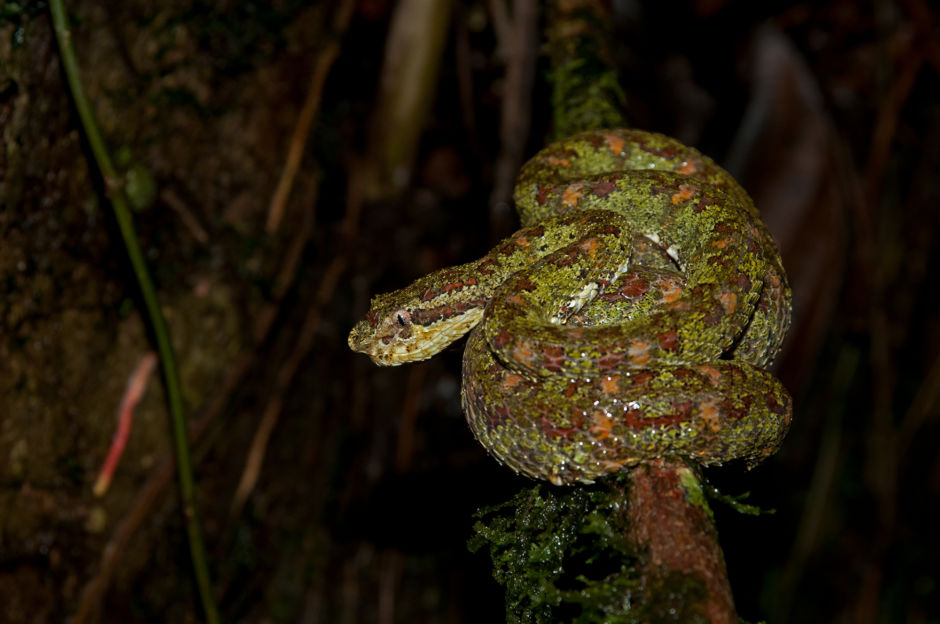 We spend the day hiking and almost walk past the dainty eyelash viper curled up on a branch on the side of the trail, perfectly camouflaged against the moss-covered bark. According to our guide, "she" can be found on this spot any day, frozen motionless for hours, waiting for an unwary prey to approach within her striking distance. 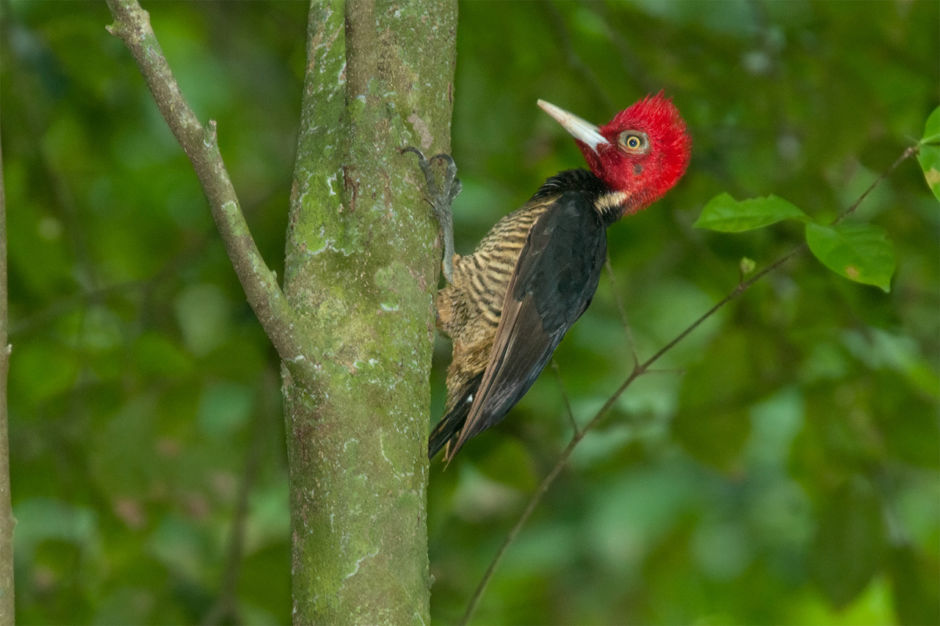 Further up the trail, we spot a pale-billed woodpecker – one of Central America’s largest and most striking woodpeckers. It lands low on the tree trunk and hops its way up, snatching insects along the way. 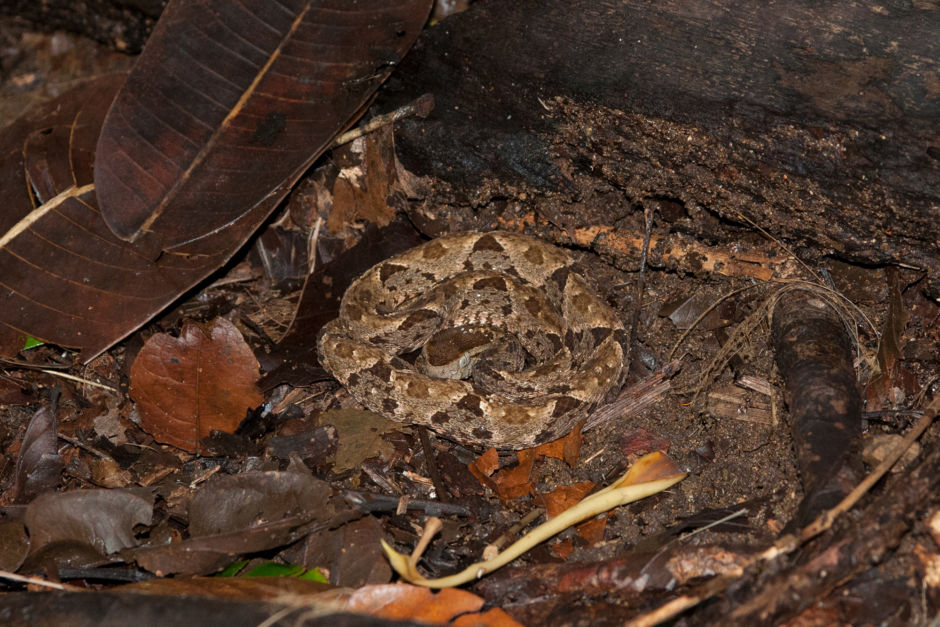 On our last morning in Corcovado we find Central America’s most dangerous snake - the Fer-de-lance. This aggressive viper is responsible for most snakebite-related deaths among humans in the region. Curled up on the forest floor, a mere few meters away from the trail, it is perfectly camouflaged among the leaf litter. 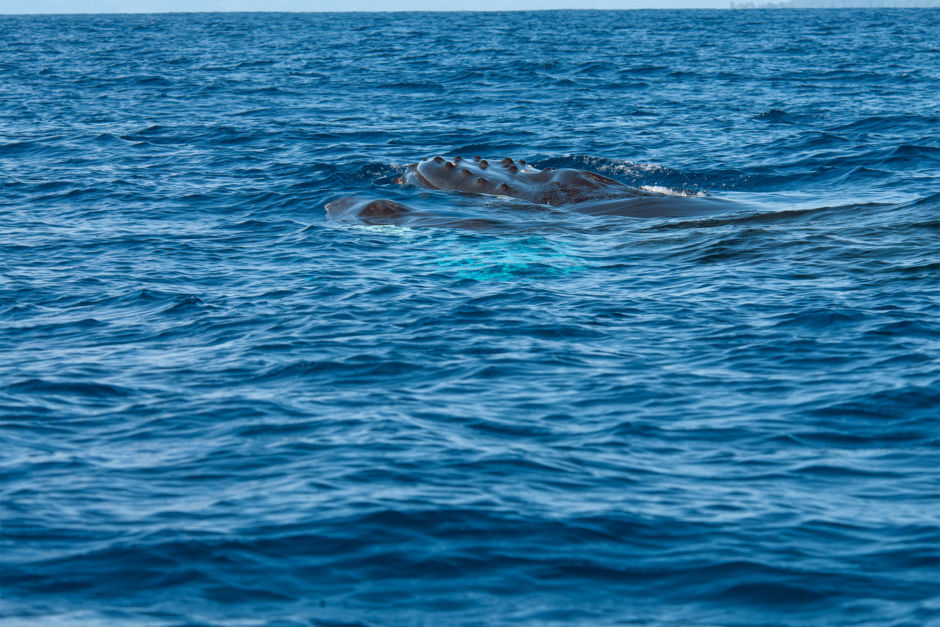 The ocean surrounding the Osa Peninsula is the best place in Costa Rica to see Humpback whales. We take a whale-watching tour with Divine Dolphin from Drake Bay and spend an afternoon watching the Humpbacks that have travelled here from their feeding grounds in Antarctica to rest, mate, and give birth.

For wilderness areas like Corcovado to exist, government action is required and Costa Rica’s government is serious about protecting its natural heritage. Over 25% of the country’s territory is preserved under some level of protection. Costa Rica’s private sector also contributes to conservation efforts by creating private reserves dedicated to ecotourism and research.

There is also something that each of us can do to help protect the world’s remaining wilderness areas. Walking through the pristine jungle of the Puma Valley we were confronted with the ugly side of our society’s obsession with plastic: a rubber sandal hanging on a low branch of a tree, a deflated basketball wedged firmly between its gnarled roots, a multitude of plastic bottles half buried under the leaf litter.

All this trash is brought to Corcovado by the ocean. It arrives with the high tide and gets trapped by the vegetation as the tide retreats. It is a sobering realization that some of the rubbish littering the otherwise-pristine wilderness of the valley could have come from our own backyards.

Each time you feel tempted to choose convenience over commitment, remind yourself that every bit of plastic you thoughtlessly discard may end up lining the stomach of a whale or a seabird or littering a puma’s den half the world away.

Culture11 Facts About Costa Rica That Will Surprise You
Tagged
Costa Rica
What did you think of this story?
Meh
Good
Awesome