I stand at a viewpoint in Terrace, British Columbia, and understand immediately why the Tsimshian, one of the largest First Nations people in the area, have inhabited the valley for thousands of years. It’s big nature out here. I watch bald eagles soar above me, old growth forests unfold below me, and the towering Skeena peaks looming behind moss-covered cliffs before me. It’s the Skeenas I have come here for. I want to take in BC to the fullest and I, for one, am doing that by heli-skiing.

I make my way to find my guide, Yvan. There’s a group of us signed up for seven days of heli-skiing in the Skeenas, which sees an incredible amount of snow each winter and near-perfect conditions. We’re buzzing, eager to pile into a helicopter and James Bond our way into the mountains. Yvan walks into the room and doles out big Canadian hugs to each one of us. He motions with his head to the helicopter: “Get ready for the best day of your lives.” 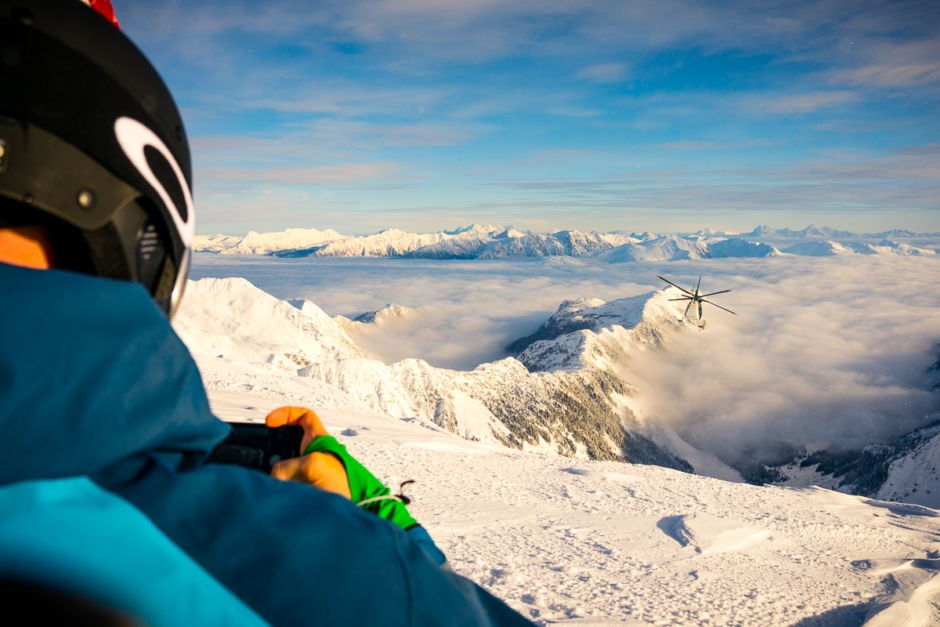 The Skeena Mountains are a subsection of the interior mountains of Northern British Columbia. The Skeenas abruptly rise from sea level to 2,500 meters. This mountain range was pretty much built for heliskiing: the tenure includes 7,000 kilometers of skiable terrain and the peaks receive 30 meters of snow on average each year. 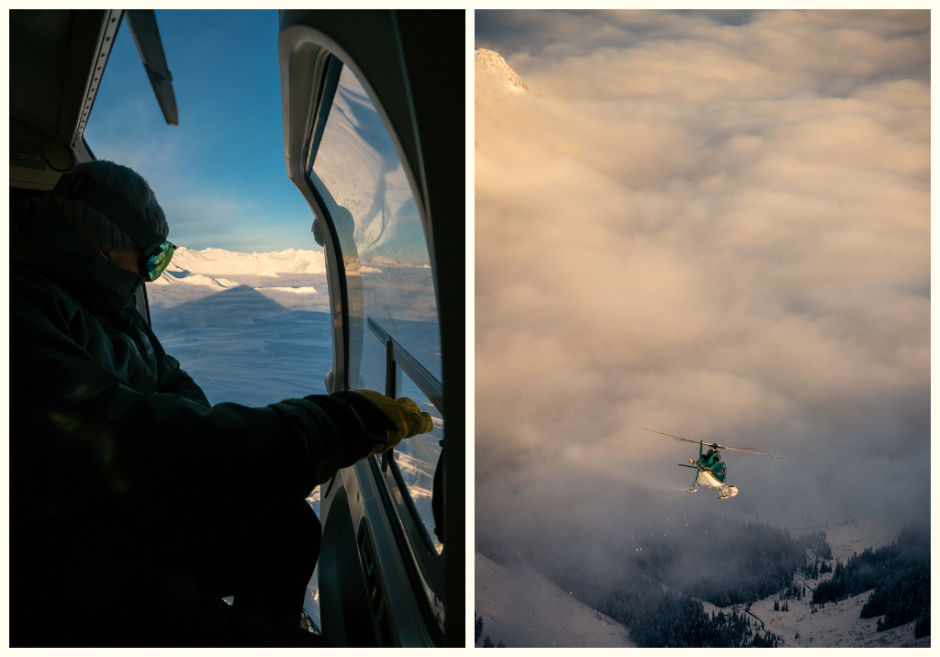 The Agusta Koala helicopter is a sleek Italian model that looks like it belongs more in a bank heist getaway than delivering skiers to alpine summits. The Koala holds six passengers and does sixty to eighty landings per day. The helicopter seems made for the high alpine environment - our pilot Gordie says the heli “climbs like a homesick angel.” I feel it’s going to be a good (and long) run when the shadow of the mountain I am heading to extends almost all the way to the opposite horizon. 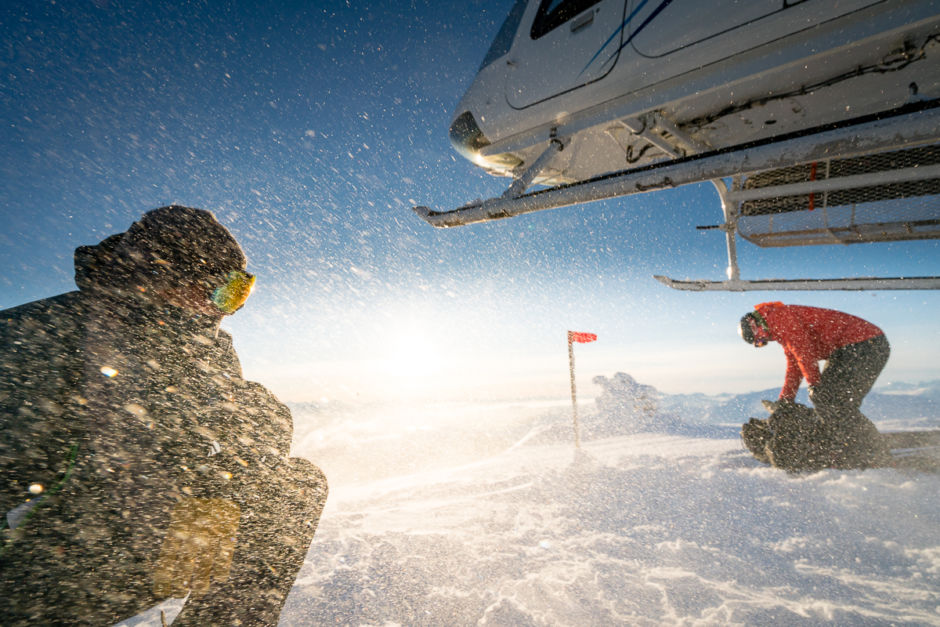 Getting out of the helicopter on top of an alpine ridge is hardly serene: the echo of the blades reverberate in my chest and the “rotorwash” propels wind and snow into my face. In that loud chaos, everyone grabs their gear and the heli takes off in an intense blast of snow and wind, leaving the group looking down at 1500 meters inversion in the valley bottom. 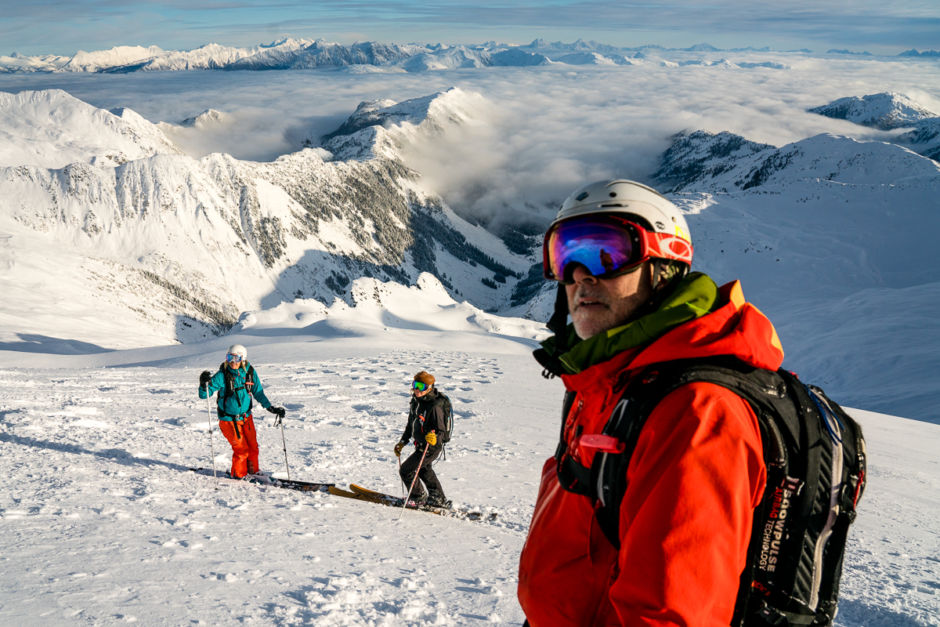 After the rush of arriving by helicopter and the chaos stepping out into the rotorwash, I was amazed to find myself in sheer and perfect silence after the Koala lifted away. It felt like big silence, filling the enormous space between the sky and the mountains. We took a few minutes to take in the view and get into our skies, but then it was go time. 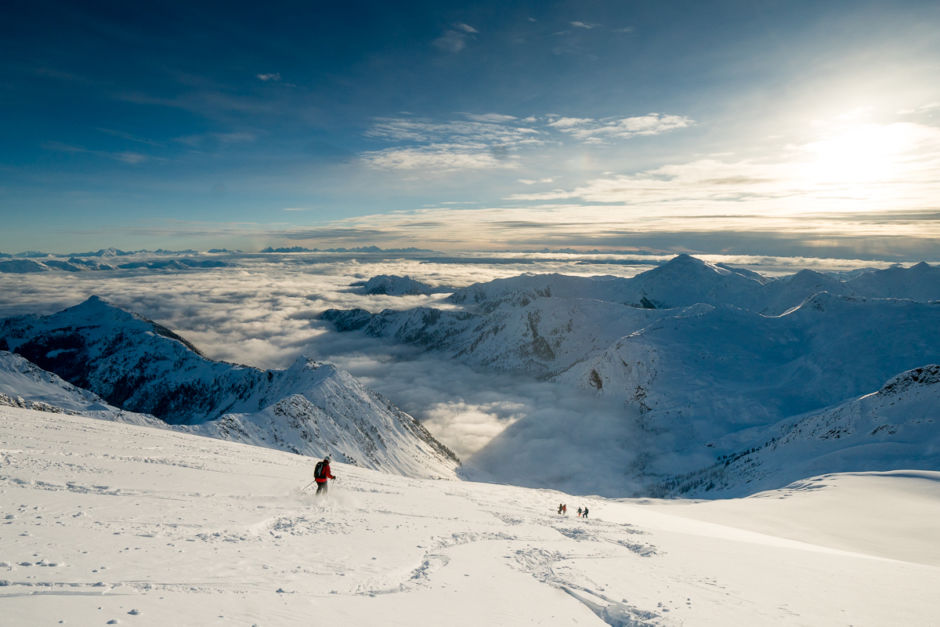 Heli-skiing packages try and guarantee a certain amount of “vertical” in a package. You do a run and get lifted back to the top, or to a new area, to go again and again, each run being as many as 2000 vertical meters in descent. The company I used said they average 44,000 vertical meters in a week-long package. That’s a lot of runs. With access to 5,500 square kilometers of mountains, the destinations and types of runs are almost endless. 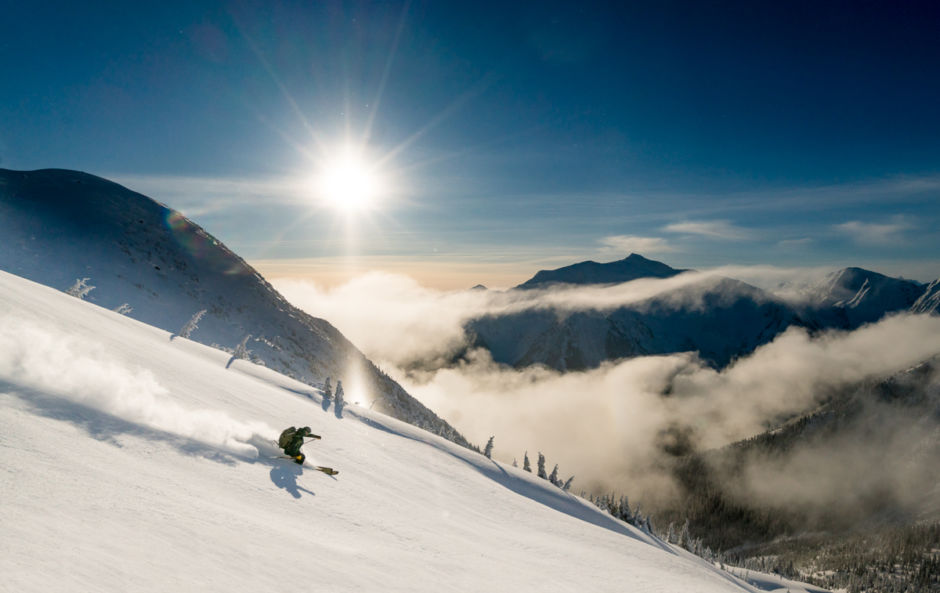 One draw for heli-skiing in general - aside from the obvious bragging rights, epic views, and the badass helicopter - is the powder, which is untouched unlike at ski resorts. And the Skeenas are famous for it. I see why: the snow in the Skeena mountains is unlike anything I’ve experienced. The storms come in warm and drop large amounts of snow, and as the storms clear the temperature cools; this pulls the moisture out of the snow, leaving low density, dry powder to swoop and swoosh through. 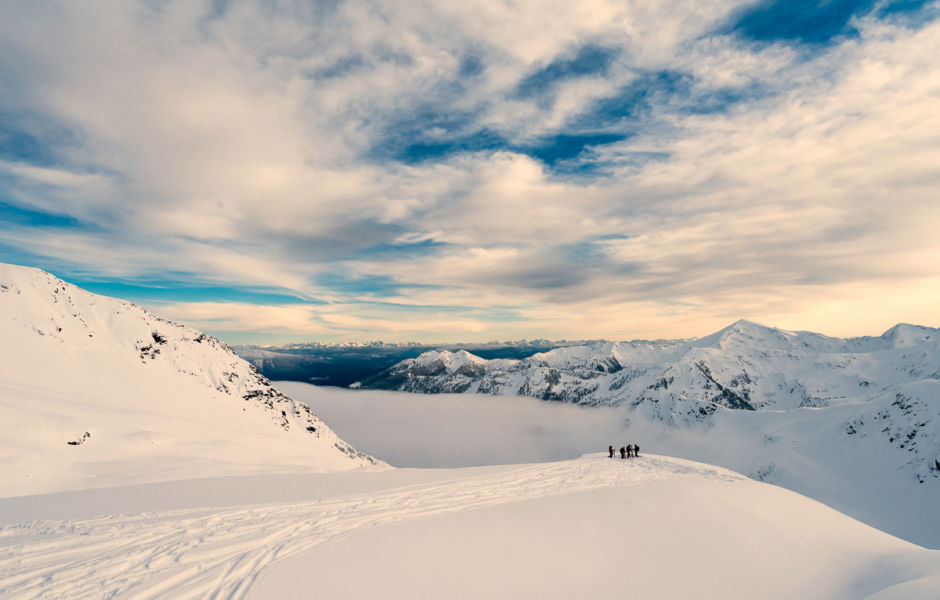 After a 1500-meter run I only have to wait a few minutes for my next heli ride back to the top to do it again. This range is famous for heli-skiing precisely because of its options: high alpine peaks, old growth forests, powder-full bowls, and glaciers are all within reach - and lots of them. So, where to next? 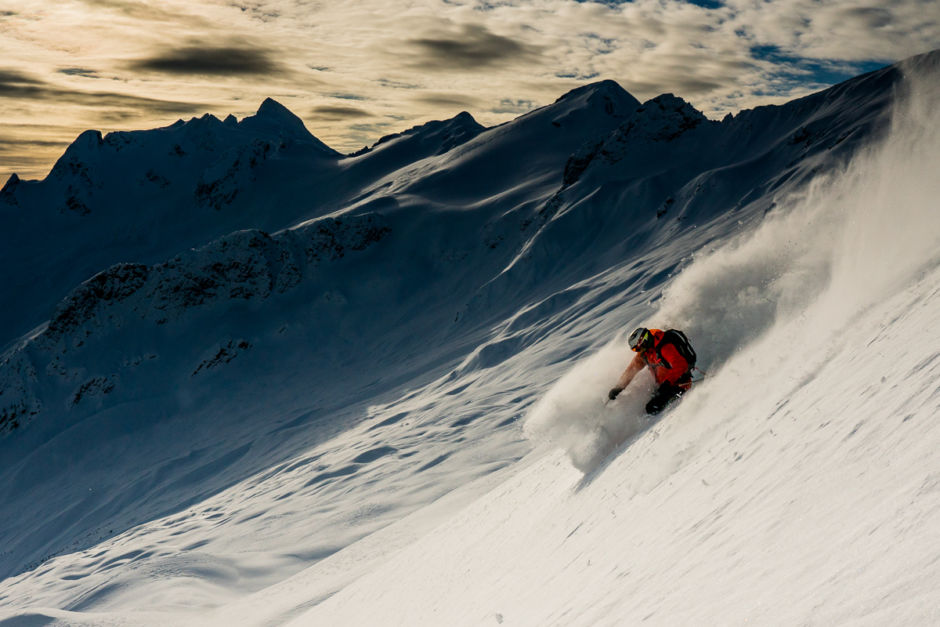 The aforementioned powder provides a pretty amazing descent down the mountain. Because it’s so dry, it’s almost springy. I could almost bounce into a turn with a lot of weight and feel like I was being bounced back; essentially I could “trampoline” my way along. Combine that sensation with the views of the Skeenas and the ranges beyond, lack of tourists, and the only sound being the swish of the snow under me, and it is easy to see why people get hooked on this. 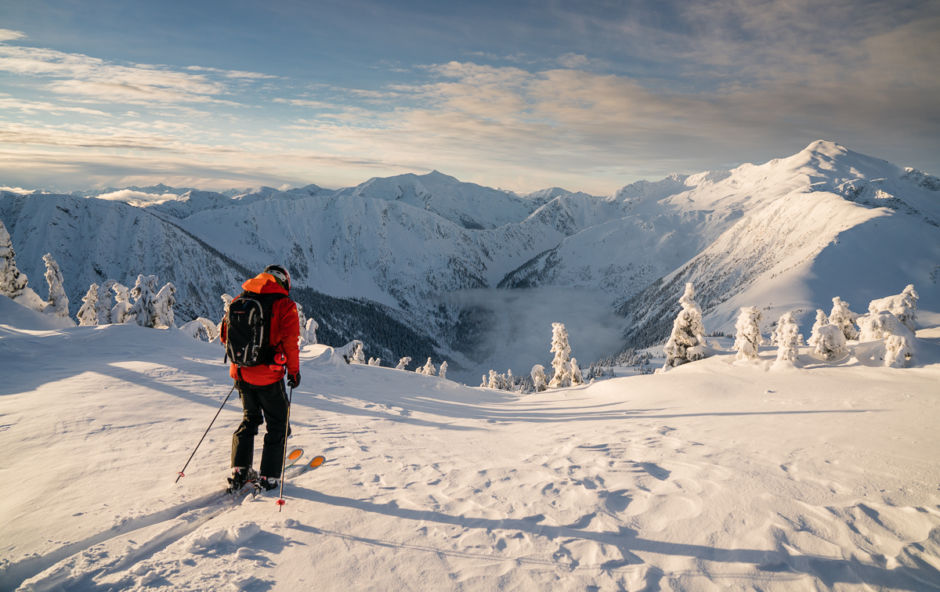 Yvan, pictured here, and his team led the way. I appreciated them deeply as getting lost in high alpine mountains is actually not on my bucket list. Run after run they guided us down and back again, so familiar with the mountains despite the massive amount of space out there. On our final run of the week, Yvan shouted back at me: “Told you it would be the best week of your life!” He wasn’t wrong.

Note: This author’s trip was independently sponsored by NEH Heli-Skiing.

Ski & SnowSkiing Down a Glacier Is Just as Badass as It Sounds
Tagged
Extreme Sports Galleries British Columbia, Canada
What did you think of this story?
Meh
Good
Awesome