I booked a cheap flight from Lisbon to Rome on a whim. I was at the tail end of a three-month rail journey through France, Spain, and Portugal, but a quick €20 flip across the Mediterranean to Italy was too good to refuse.

A few days later I was walking the streets of the movie set that is the Italian capital, in awe of the living history around every corner. But Rome, it turns out, is just a short train ride away from Naples. And Naples, it turns out, is the gateway to Pompeii, and temptingly close to perhaps Italy’s most revered destination — the Amalfi Coast. 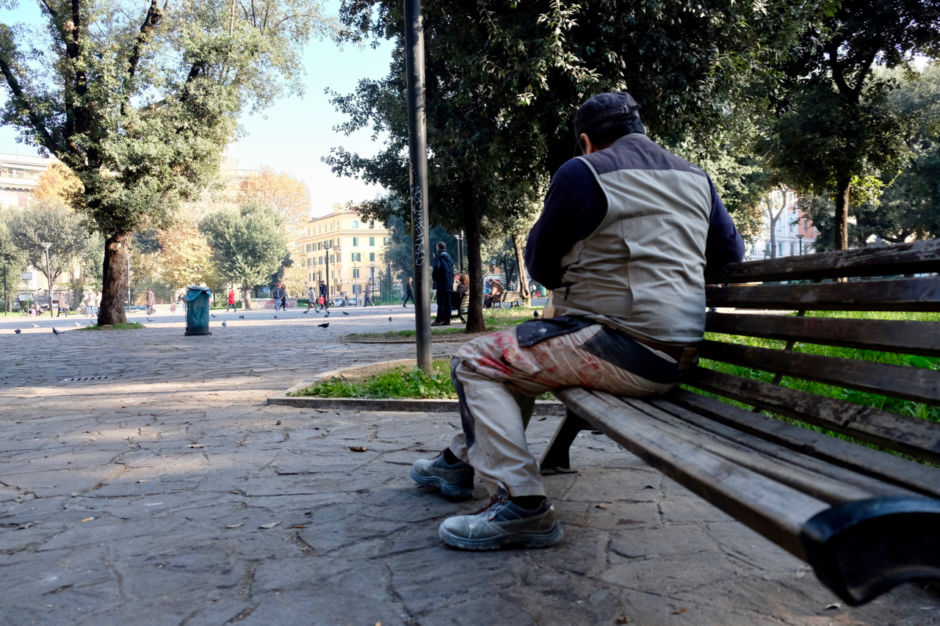 A strike in Rome had crippled almost all public transport. The metro station entrance was barred and shuttered. A graffitied display above it read: Servizio Fermo. Causa: Sciopero. An armed soldier explained that Sciopero meant to strike and that it was likely to last a few hours. With nowhere to go, I sat on a broken park bench somewhere on the outskirts of the tourist center, where I was treated to insights into daily city life I’d have otherwise hastily overlooked. 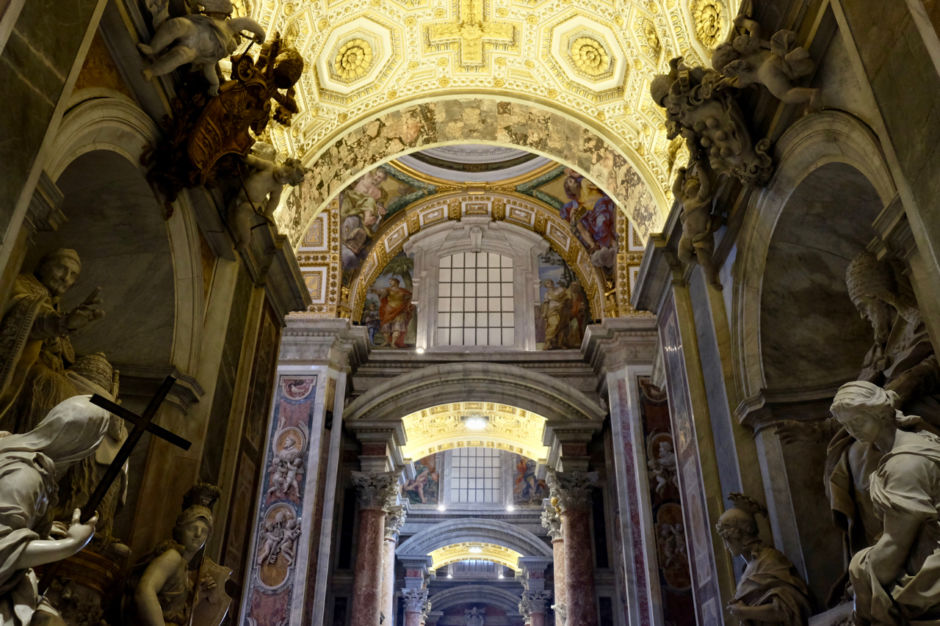 I find an overpowering ostentatiousness to the inside of the Vatican’s St. Peter's Basilica. Each intricate detail forms just a single piece of the gargantuan religious puzzle that spreads out all around you. And yet it’s so emotive that it stops even the non-religious in their tracks for a moment of reflection. 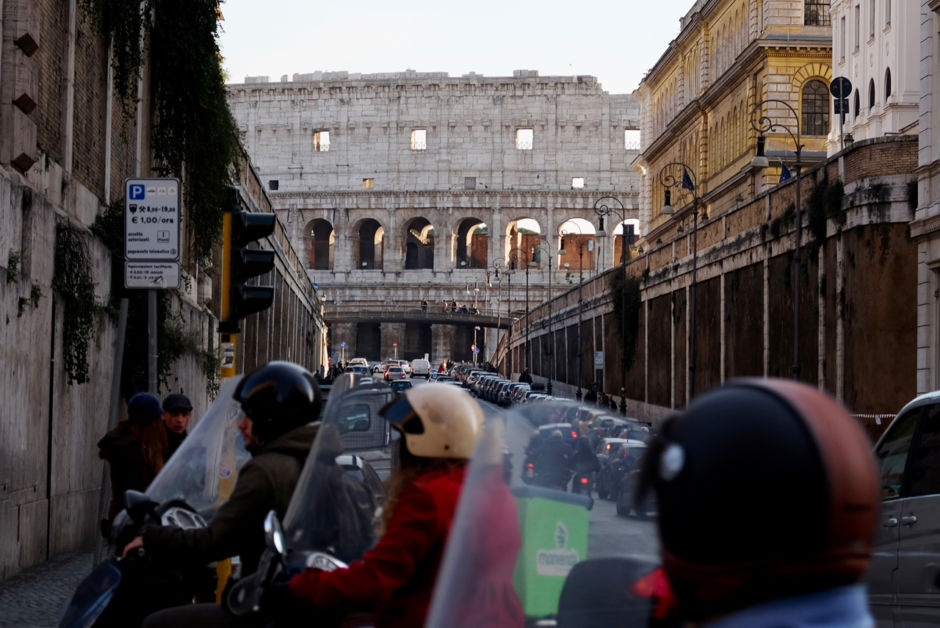 The streets of Rome can be busy and overwhelming. It’s easy to lose yourself or get swept up in the blaring horns and growling engines. On one of these occasions, I rounded a corner, became lost and unsure which way to go, and looked up to notice the city’s most iconic site – the Colosseum – in front of me. The buzzing traffic swirled around me as I reached for my camera, and I couldn’t help but feel as if I’d accidentally walked onto a live movie set. 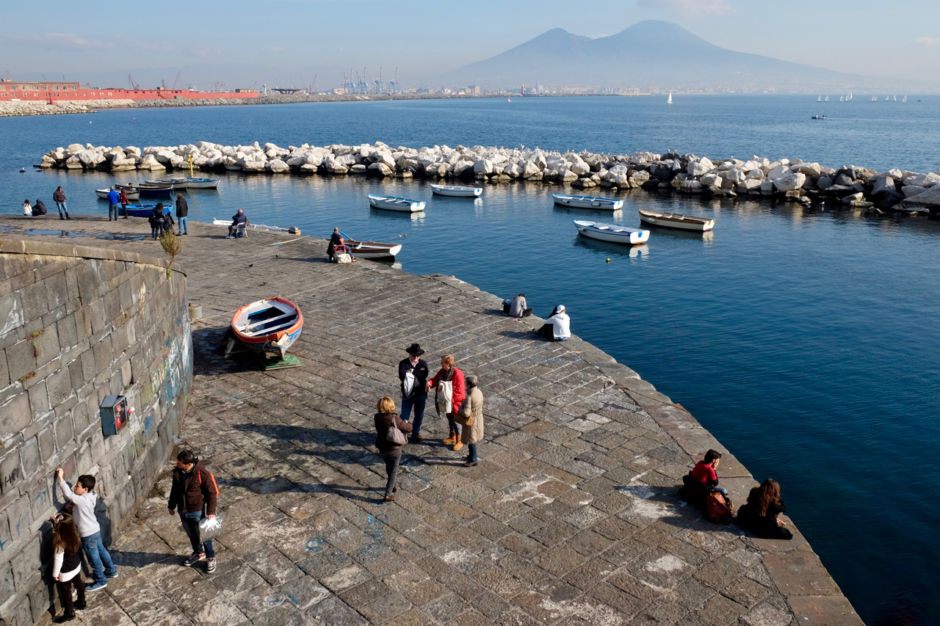 Two days later I was in the chaotic city of Naples. “You’re in for a culture shock,” my Roman Airbnb host had told me. He was right. The streets overflowed with pedestrian traffic dipping in and out of clothing stores, pizza joints, coffee shops and churches. There was nothing to do but jump in and join them. I followed the steady stream of shoulder-to-shoulder people all the way to the water, where the sight of the Bay of Naples and Mount Vesuvius offered a brief moment of respite. 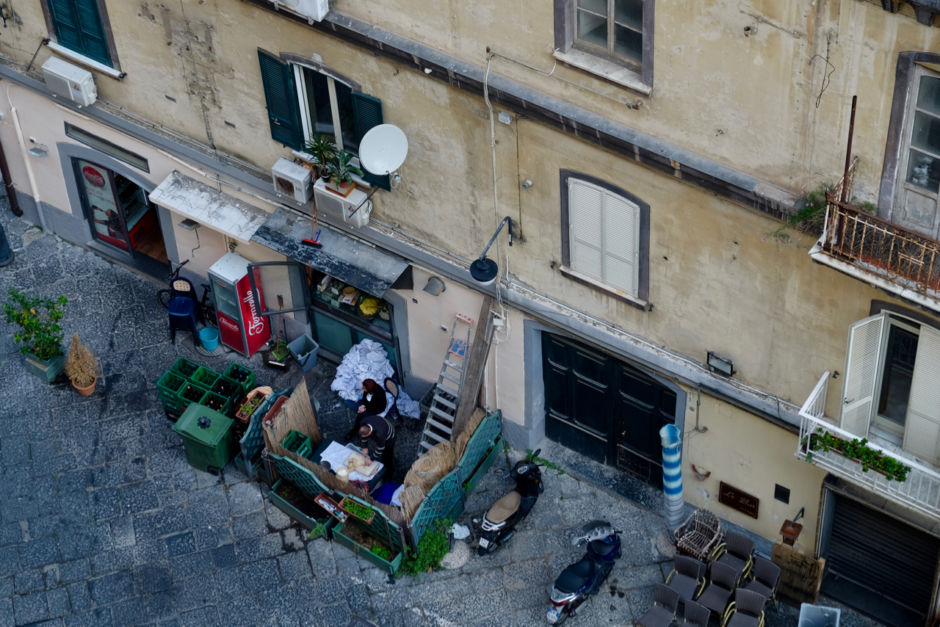 The temptation when on the walls of Castel dell'Ovo is to look out over the ocean and reflect on Vesuvius, the volcano that all but crippled an entire population in 79AD. But it was when I looked down the steep sides of the castle that was given a glimpse into the Neapolitan life I’d have otherwise missed. 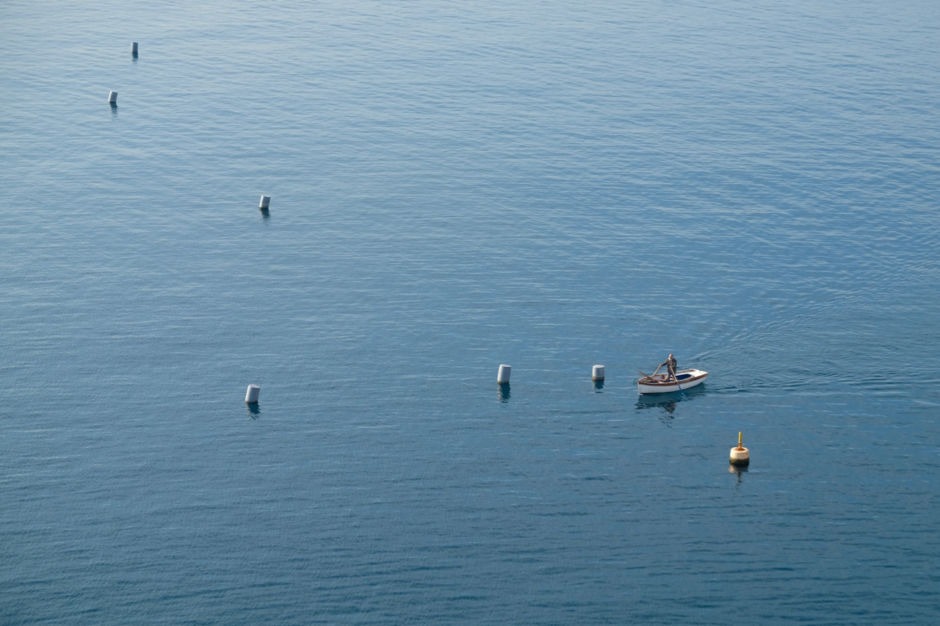 In contrast to the bustling streets, the Bay of Naples was surprisingly tranquil. I watched this man row his boat across the calm waters with perfect ease. 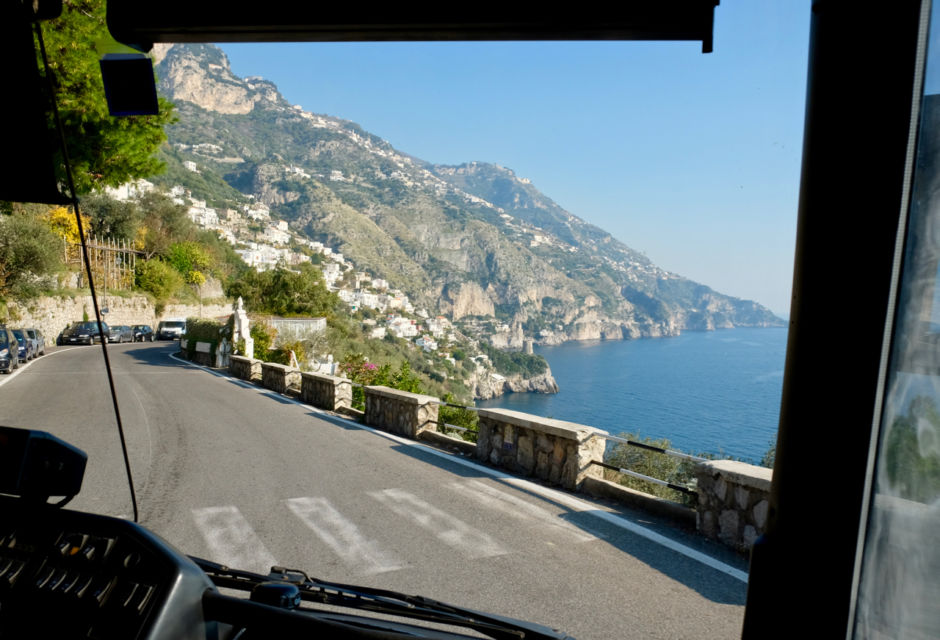 I thought picking a seat in the very front of the bus from Sorrento to Amalfi was wise. As we rounded the first corner and missed an oncoming Fiat by mere inches, I realized it might not have been the best decision. The driver slammed on the brakes so hard to avoid an otherwise catastrophic accident that he sent my possessions flying off the seat next to me. He turned to look at me scrounging on the bus floor for my camera and water bottle and offered a shrug before jamming back down on the accelerator. 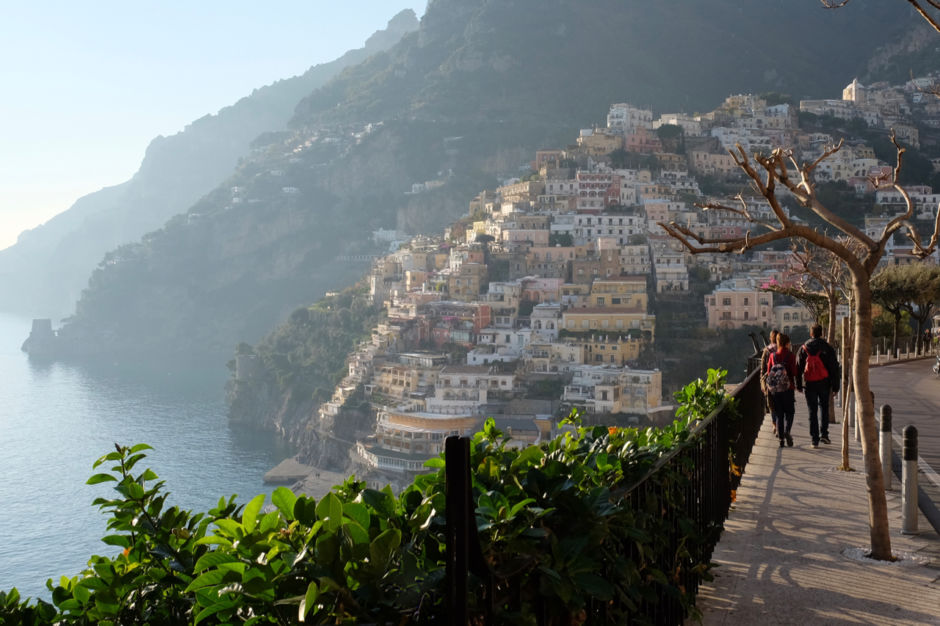 This Positano bus stop must be one of the most beautiful in Italy. My appreciation for getting out alive after the harrowing trip only added to the beauty of this picturesque cliff-side town. 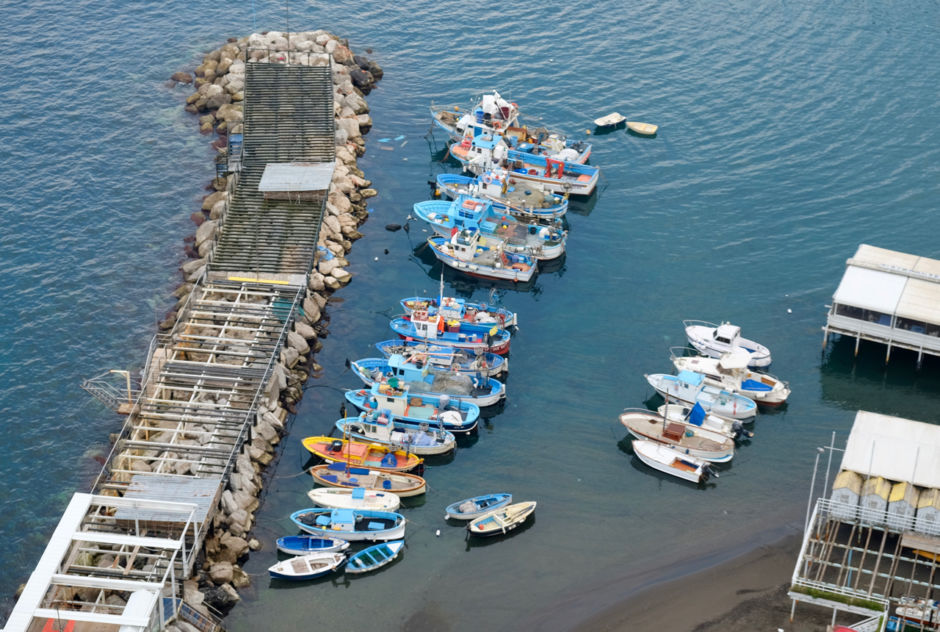 As the gateway to glamorous destinations like Capri, Positano, and Amalfi, Sorrento can verge on being painfully touristy at times. But just a short walk out of town you’ll find pleasing relics of the early days, such as this humble harbor still used by a small crew of local fishermen. 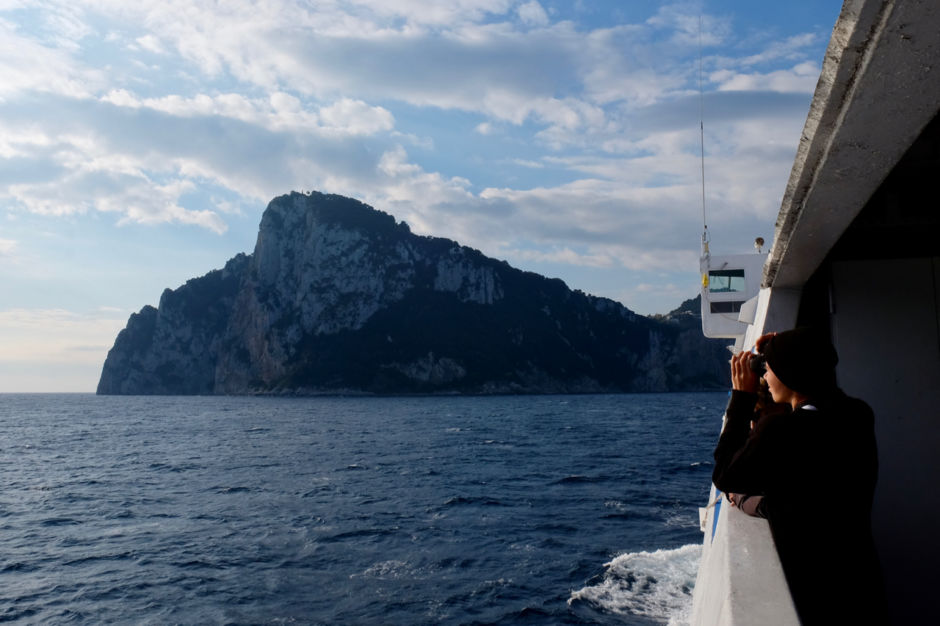 A ferry ride to Capri isn’t cheap, but it’s a worthwhile investment. The quick trip across the sea offers the perfect build up to one of the country’s most beautiful islands. 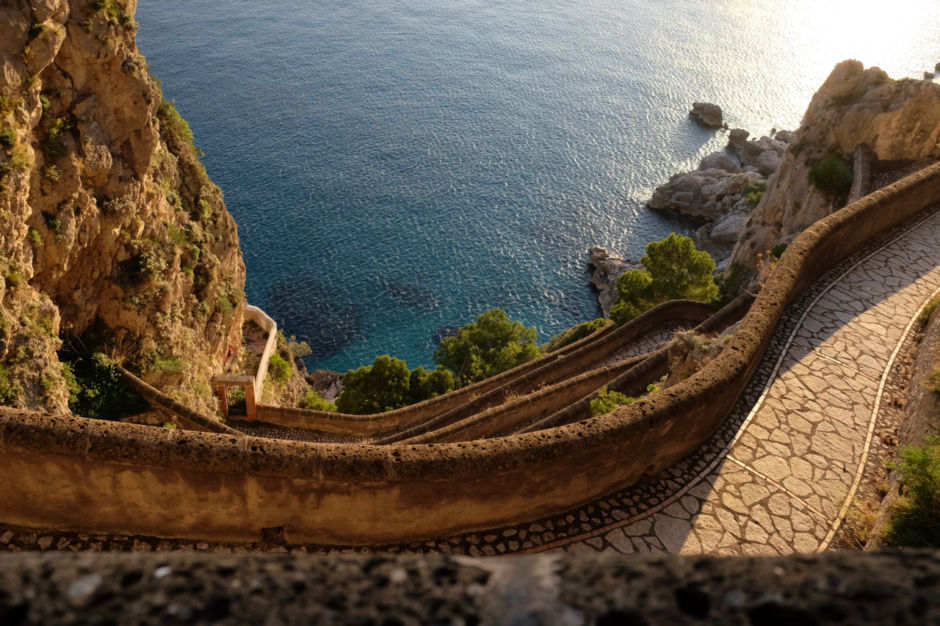 I looked down on Via Krupp from the viewpoint in the immaculate Gardens of Augustus. I felt an urge to walk the winding network of switchback paths to the sparkling ocean some 100 meters below. But it was not to be. Locked and boarded gates indicated that it hadn’t been open to the public for some time because of an ever-present danger of rock falls.

I glanced around the empty gardens; it was a risk I was willing to take. I scaled the spiked gate as quickly as I could and made my way down the abandoned hairpin pathway towards the lapping waters. At the bottom, I watched a dramatic sunset without another person in sight. I couldn’t have wished for a better way to end a whirlwind trip along this idyllic stretch of the Italian coastline.

Tagged
Italy
What did you think of this story?
Meh
Good
Awesome