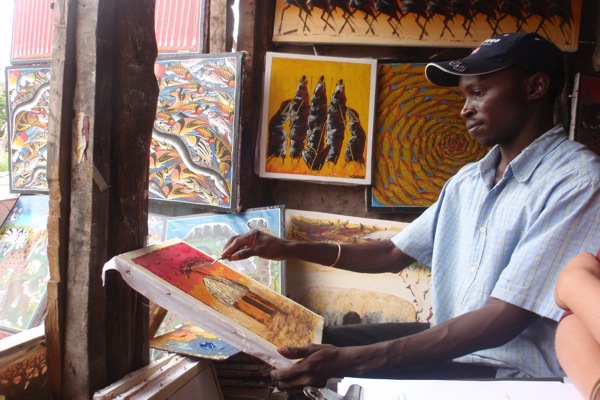 Edward S. Tingatinga, a Tanzanian casual laborer in the 1960s, was the first person to paint in the style that now bears his name. I, Cara J. Giaimo, an American student in the 2010s, am now among the most recent.

In order to really connect Mr. Tingatinga and I, that one similarity has to counterbalance a lot of differences. Edward S. made his art with bicycle paint and masonite ceiling tiles leftover from the odd jobs he originally made a living off of. I’m using new materials: brightly colored, brand-name Master Paints, brought in from Dar es Salaam and brushed onto cloth that has been rubbed with wheat flour, waterproofed with white oil paint, and nailed to a homemade wooden frame.

I go to a liberal arts college; Edward didn’t go to any sort of arts school at all. And Edward was good enough that people solicited his work, good enough that dozens, if not hundreds, of Tanzanians now make a living imitating it and selling the results to tourists. I’m just supposed to be striping a zebra and I’m royally screwing up.

“No no no. Hold the brush like this . . . and put your little finger against the cloth, here.” My teacher, Max, is patient. We are seated very close together on a small bench in the entranceway to Suleman’s Art Shop in Mto wa Mbu, Tanzania, bent over a painting the size of a potholder. Currently it’s three silhouettes on a bus-yellow background, but soon it will be a zebra, a giraffe, and a hippopotamus. 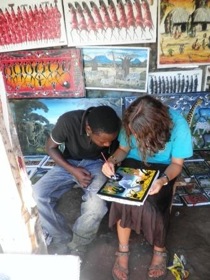 There are six more paintings almost exactly like it on the ground, displaying various states of completion, and from then I can infer what Max did before I got here – stretched and waterproofed the campus, coated the background and let it dry, sketched out the main actors, filled in landscape details (a foamy river and trees, all children’s-book soft) – and what he’ll do after I leave, assuming I don’t botch it beyond repair.

After the animals are patterned they will be afforded eyes, big Betty Boop ones encircled in red. Then they can look around at all the each others there are, herds and herds of Tingatinga animals, hung up and propped up and laid out, covering the ex- and interior of every shop, up and down and on both sides of the long section of street. Max reaches over and calmly scrapes my latest stripe off with a fingernail.

Tingatinga is a type of what’s known as airport art – art made exclusively to be sold to tourists. And tourism is the largest and fastest-growing industry in Tanzania. People come from all over to see the wildlife, and when they leave, they want to take home nice, authentic, packable souvenirs.

That’s why the switch from ceiling tile to waterproofed cloth – the latter doesn’t break or smudge, and can be rolled down to the size of a pair or two of socks (plus you can bring it into Australia, which doesn’t allow in any foreign wood products).

It’s also why so much of it looks the same – it’s much easier and faster to paint the same things over and over. Max can make four or five notebook-sized Tingatinga in a day. Subjects are determined in the first place by what tourists want and expect to see in Tanzanian art, which may explain the colors, the jumbled and overlapping patterns (which match the fabrics that are used for everything here) and the preponderance of large savannah mammals. You look at it long enough and you start to hear thumb pianos. 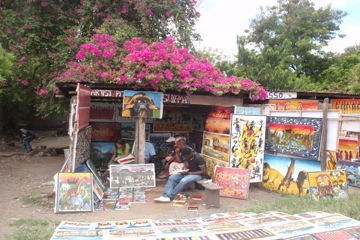 All of this is explained to my companions and I by Big Sam, who we meet in Suleman’s shop. In spectacles and a Cape Cod baseball cap, Big Sam looks (and probably is) nearly twice the age of any of the other painters we meet in Mto wa Mbu, but he came here for the same reasons as everyone else – to learn an interesting trade and make money doing it.

He was a schoolteacher in Dar es Salaam until the pay dried up. Now, along with Max and Young Sam (who originally led us to the shop, calling it a “Tingatinga factory”), he’s being taught by Suleman, the shop’s owner and namesake. When Edward S. Tingatinga realized that his solo production team couldn’t keep up with customer demands, he taught some of his young relatives his tricks. Those boys taught other boys, and on and on, until someone taught Suleman.

Someone else taught Charles, who rushes into the shop about midway through my painting lesson, sweating through a black muscle shirt and a knit cap. We’ve run out of yellow paint and he’s generously lending us some.

He’s come all the way from the first shop on our side of the road, which he owns with his brother Thomson – Charles learned to paint Tingatinga and Maasai knife paintings in Dar es Salaam and is teaching his brother. Right now, in an attempt to diversify their styles, they’re both working on paintings of only hippos. I’m interested in this technique, and this goal – if it’s all just for money, why bother developing a personal style? Why not just go with what’s been working, and selling?

Later that day, taking a break from my zebra, I voice my question out loud to O-Man, the owner of the shop next to Suleman’s and (of course) a Tingatinga painter. He is surprised. “Personal style is key,” he assures me. “Why else would anyone buy your Tingatinga and no one else’s?”

I had been assuming that it was a matter of practical skill rather than artistic ability; that, having learned the basic components, the Tingatinga painter was more of a rearranger, a human scrapbook-and-photocopy machine. My attention is directed to a table of about 12 different paintings, some by Suleman and others by Maiko, a nationally famous Tingatinga artist who sells to many of the smaller shops.

“You’ll see,” he says, “Maiko paints fewer animals, but he paints them bigger. Suleman does many small animals.” He’s right. And there are other, subtler differences, too – color choice, placement, thickness of brush strokes, even the expressions on the animals’ faces, how they appear to be relating to each other. I can suddenly see why Maiko is renowned, and what Suleman has passed down to his apprentice. 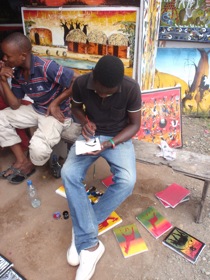 Even their versions of common paintings, arrangements I’ve seen dozens of times (the canvas-wide whirlpool of fish, the impossibly long and thin birds set out in vertical parallel) have their own spin. Soon I can pick the work of either artist out of a lineup.

I go back outside and look up and down the impossibly colorful street. I’d been very close to losing interest in Tingatinga – purposefully plagiarized paintings that are originally based on stereotypes? Artists that want to sell out? I’m an English major from the American East Coast, I hang around people who would rather get thrown out of school or off a cliff than be deliberately derivative.

But to be able to be original within limits, to simultaneously express yourself, feed your family, and represent and support your country seems admirable. So I go back in to Max and keep attempting to paint, and maybe earn, my stripes.

Tagged
Culture Tanzania
What did you think of this story?
Meh
Good
Awesome