This is what we were told by countless travelers, websites, guide books, friends and family, and we took it to heart. When planning our drive from NYC to Argentina, we planned to spend as little time as possible in Honduras.

Along the way something changed and we decided we’d spend just a few days in the country.

Ok fine, but if you go to Honduras, do not go to San Pedro Sula, the “Murder Capital of the World.” This was the even more definitive advice we received from those same travelers, websites, guide books, friends and family. 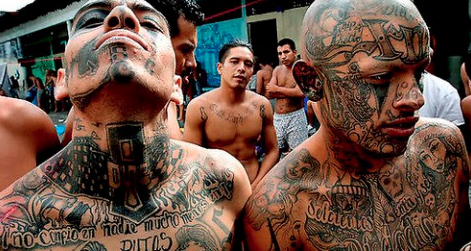 Caption: What we imagined everyone in San Pedro Sula looked like based on random news articles. Global Goulets

Everyone skipped Honduras. So we thought we would too.

That is until we took a second to think about it. In the beginning of our trip, when we were planning our route, we were certain that we would be kidnapped or murdered by gangsters in Mexico, Guatemala, or El Salvador. But we survived all three of these countries, spending close to three months driving through them, exploring the natural beauty and meeting the wonderful people that make up these countries.

We loved our time in these countries, despite the travel warnings.

But for some reason Honduras was different.

“We can’t go there! Mexico, Guatemala, and El Salvador have bad reps, but they don’t even come close to Honduras. San Pedro Sula is in Honduras. The murder capital of the world! THE MURDER CAPITAL OF THE WORLD. We will surely die,” we thought.

But curiosity got the best of us. We had to know. And there was no way to know besides finding out for ourselves.

We messaged Bobby Durrett from D&D Brewery, an American expat who has been living in Honduras for the past 6 years. He told us that despite what we may have heard, there’s a real Honduras hiding behind the screams of the mainstream media just waiting to be explored.

He promised to show us this “real Honduras,” which required at least one trip to San Pedro Sula, what he calls “the murder capital of the world that isn’t.”

Our hearts raced. The one country on this trip we thought we’d skip was Honduras. The one city we were positive we wouldn’t visit was San Pedro Sula.

And suddenly we had an invitation for a personal tour around the city.

After spending our first night in Honduras camping inside the restaurant of a kind family who we met on the side of the road, and then spending a few days doing some hiking, chilling at the beach, exploring waterfalls, and swimming in natural spring water, it was time to take off for San Pedro Sula.

In the morning we hopped into our car, turned on the engine, and began the short drive from Lago Yojoa to San Pedro Sula. We were on our way to the “Murder Capital of the World.”

“Yes, we are driving into the murder capital of the world, but I think you’ll find that the reality of what you see is much different than what you’ve read. Don’t get me wrong, there is crime here. There are places you can’t go day or night. But if you’re cautious and use a little common sense, just like in any big city, you can have a really great time here. About 800,000 people do every day.”

After making a breakfast stop for baleadas, a traditional Honduran dish of flour tortillas folded over and stuffed with beans, cheese, mantequilla (cream) and eggs, we began our tour of the city. 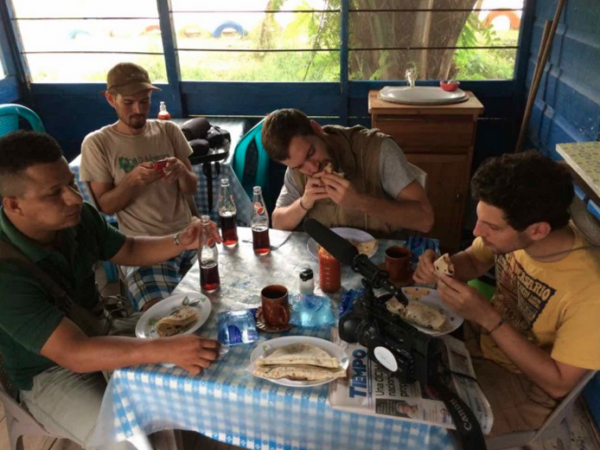 First stop, Diunsa, a department store. This might seem like a random place to visit, and yet, it was eye-opening. The scene we witnessed was very familiar to us Americans — hordes of people bargain hunting for all kinds of random products. Consumerism. It’s like we were home again!

Why was it eye opening? Well, it was the first indication that we weren’t going to die right away. There were people here doing normal things.

People doing very normal things smack dab in the middle of the murder capital of the world.

Who would have thought? Seriously, this was a revelation.

Next, we headed to La Madrugada, one of the most beautiful hostels we’ve ever seen, right in the middle of the city. The hostel, a former house-turned-school-turned-car shop-turned-hostel by two architects and a banker, emanated a calming aura that was quite unexpected given their location in the center of the murder capital. It was the perfect place for a few beers. We walked around the town center, filming the standard scene of families strolling around, enjoying the weather, eating ice cream, and taking selfies. We captured all of this with our not-so-concealable professional XF105 video camera. Later that night we went out bar hopping until 3 in the morning. 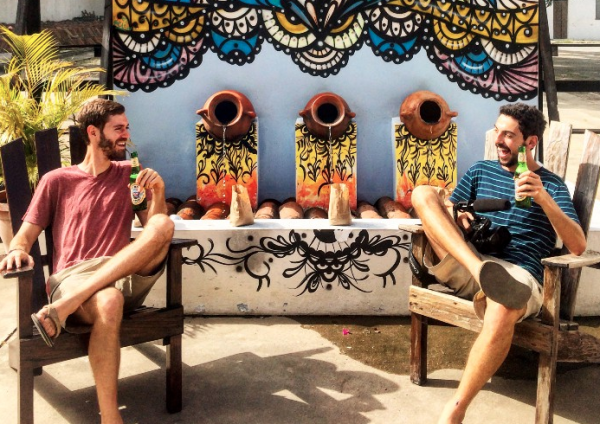 Caption: Hey, we’re not dead yet! Let’s celebrate with a beer! Global Goulets

Oh yeah. And we happened to be there during some massive political protests. As a procession of thousands marched by our hostel, we jumped in line, blending in with Hondurans of all ages, from all levels of society. They were peacefully united in a common cause to root out corruption from the government.

If you search for US State Department travel warnings, one of the most basic things they tell you is to avoid all types of political protests, no matter what the cause. And yet, there we were, in the middle of a political protest in the murder capital of the world, and we felt completely fine. But that’s a story for another time, for someone else to tell. 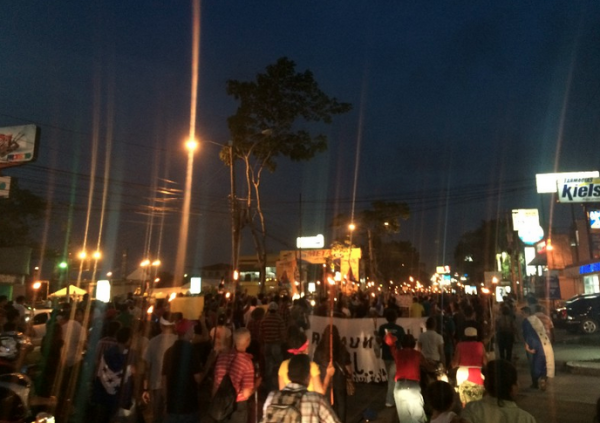 We did all of this with a near complete lack of fear. Somehow San Pedro Sula felt just like any other big city in the world.

The next morning, after downing a bunch of coffees to relieve our hangovers, we began the drive back to D&D, filled with a sense of pride. Not a pride that we had “survived” the murder capital of the world, but a pride that we had faced our fears, and not let the external hype determine the destinations of our travels. We wanted to find out the truth for ourselves, and we did.

Although we only spent about 36 hours in San Pedro Sula, we left with some big takeaways:

People live their lives, every day, in San Pedro Sula without fear. With a little commonsense and caution, you can visit and live in this city without a problem (or pretty much any other city in the world).

When you know nothing about a place besides what you read in major news headlines, you know nothing about a place. The truth is always much more complex, much more interesting, and often much more wonderful than what you’ll read or see in the news. The image we had of San Pedro Sula in our minds was basically darkness, gunshots and flashing lights. It’s so hard to imagine people walking around in the middle of the day, smiling, having coffees, and eating ice cream on the street until you actually see it for yourself.

You can go out in San Pedro Sula at night and not get murdered. We’re not sure we’d go many places beyond the specific ones that we went to, but it is possible. Every weekend people here are drinking, taking shots, and dancing, just like you.

We all live in our own little bubbles created by the information we consume from friends, families, TV and the internet. We think we know a thing without actually experiencing it, but we don’t. If we want to get out of that bubble, we need to make the conscious decision to get out of it, and then take some uncomfortable actions to actually move ourselves out of it. Those actions could be as simple as changing up what we read, or as drastic as traveling to a new country. But in the end the growth and experience we gain is invaluable. 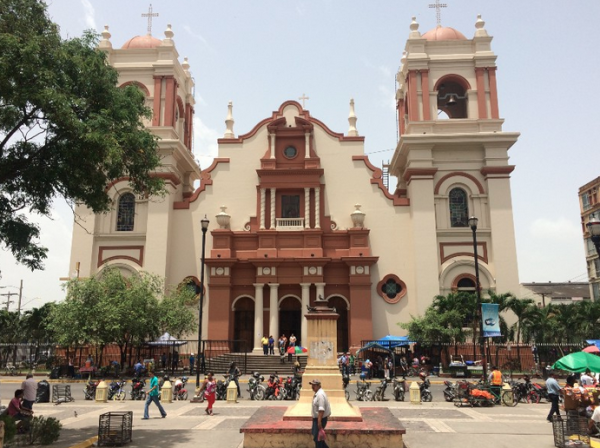 Follow our ridiculous but enlightening adventures through Central America @ www.globalgoulets.com

About us: We are the Global Goulets, 3 guys who quit our stable NYC jobs to drive the world and film it for TV. In summer 2014 we completed the Mongol Rally, a 10,000+ mile drive from London to Mongolia in a crappy purple car. We are currently adventuring again, this time driving an equally crappy car directly from NYC to the southernmost tip of Argentina. Read more about what it’s like to travel through Central America www.globalgoulets.com or on Facebook.com/globalgoulets

This article was originally published on Global Goulets, and has been re-posted here with permission.

Tagged
Honduras
What did you think of this story?
Meh
Good
Awesome

I Went To Honduras, and Here's Why I Have To Go Back ASAP

17 Spanish Expressions To Know Before You Go To Honduras

Everyone Told Me It Was Dangerous To Take My Kids To Honduras. Here’s Why We Can’t Wait To Go Back

18 Things You Have To Do in Honduras Before You Die

20 Signs You Were Born and Raised in Tegucigalpa

11 Things You'll Miss as a First-Time Traveler To Honduras

14 Over-Water Bungalows To Dream About at Work

Río Plátano: Invaded From All Sides