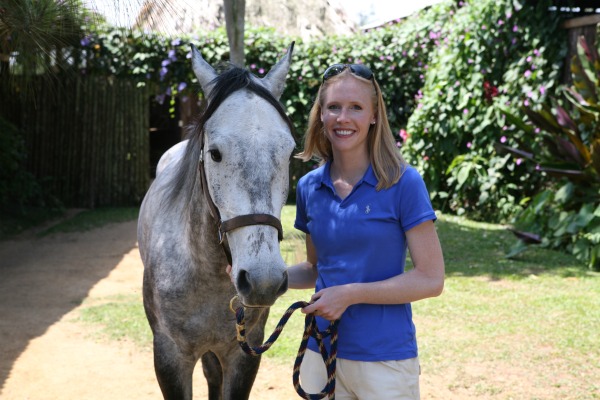 I MET DARLEY Newman at Equine Affaire, a regional event for horseback riders and equine professionals, in November 2010. My goal in attending was to rack up professional development hours to count toward my riding instructor certification renewal, and while browsing the seminar schedule, skimming over topics about barn manager liability, hoof abnormalities, and establishing better communicating with donkeys, one workshop caught my attention: “The Importance of the Equine in International Cultures” with Darley Newman.

Hearing about Darley’s experiences riding among the Bedouin in Jordan, along volcanic cliffs in Iceland and as part of a raucous party ride in Costa Rica, I knew she was someone I could spend hours talking to if given the chance. Since meeting at Equine Affaire, we’ve been in touch through email, and I was able to ask Darley a round of questions about riding, producing Equitrekking and her interactions with the horse cultures of the world.

When and where did horses first become a part of your life?

I was introduced to horses at camp in the mountains of North Carolina. I was seven-years-old. The ride itself wasn’t that impressive. I just walked around a ring, but I remember being awestruck that this horse– he was massive and strong, and, unbelievably, let me ride him. Better still, he listened to me! I learned that horses are powerful and remarkably sensitive. It would take a few more years before I fully understood a most basic equestrian truth, namely that while riding, you become a partner with your horse. It’s really a spectacular feeling and bond.

How did you come up with the concept for Equitrekking, and how did it evolve? 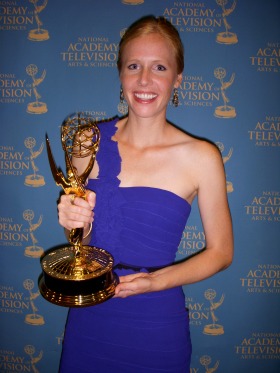 In 2009 and 2010, Equitrekking received three
Daytime Emmy nominations and won for
Outstanding Photography.

I was working in television in New York City and wanted to combine my passion for horses and travel and do those things I love on a daily basis, and Equitrekking evolved naturally from there. I wanted to get out and see the world, and bring it back home with me. Through riding, I could reach these beautiful natural settings, spend time with horses and meet local people.

It wasn’t easy to launch a TV show. I didn’t have a lot of money or big production credits. All I had was a good idea, a passion for the subject and the ability to learn new things. My goal initially was just to get one of the shows on a PBS station. I started the show locally on PBS in New Mexico, where we garnered strong ratings, and grew it from there. It’s taken a lot of hard work and a few years.

Now, Equitrekking is broadcast to over 94% of the US on PBS stations and on networks in over 65 countries. I’ve written a companion book, developed two websites devoted to equestrian travel and vacations, and won a Daytime Emmy. We’ve introduced viewers to destinations and people that wouldn’t normally be profiled in the media and to a new way to discover the world that’s eco-friendly and more accessible than one might think.

Can you share an example of how horseback riding with locals has helped you learn more about local culture in a way that a typical tourist wouldn’t have been able to?

A passion for all things equine is, in my experience, perhaps the easiest way to bridge cultural divides. I’m continually amazed at the ubiquity of a strong and often ancient bond between horses and humans in even the least agrarian, most urban and furthest flung cultures. It’s this love for horses that yields an automatic connection with locals, even transcending language barriers. The most amazing adventures come about when a local, sensing the shared passion, takes you beyond their favorite lookouts, and helps you develop a personal connection to the land and culture. These are truly the things one won’t find in a guidebook.

Jordan was one destination where I was a little nervous to ride. Arabian horses, which are thought to have been originally bred by the Bedouin in the Middle East, are a “hot-blooded,” spirited breed. I was afraid that I wouldn’t be able to handle my horse, riding with the born-on-horseback Bedouin in the vast open desert.

Cantering alongside Atallah, my Bedouin guide, our horses challenged each other to be the lead, racing across the open dessert at speeds I’ve never experienced on horseback. I later learned that Atallah is a world champion endurance rider, and I was sitting atop one of his prized horses. Atallah grew up in the Wadi Rum and competes in these 100-mile races through the desert and in other parts of the world. 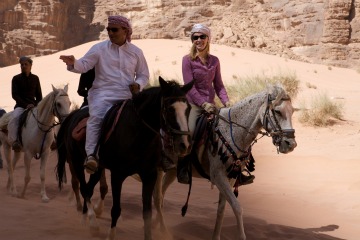 Riding with Atallah, I was able to understand what it takes to survive in this climate. We rose early to ride in the cool of the morning, keeping an eye for shelter to break for several hours during the midday heat. The shade of a canyon, or even outcropping of rocks would do. The Bedouin are masters at finding shade. Whenever we had the chance, we would make for a canyon to ride among the shadows for our benefit and for our horses.

Atallah continually pointed out plants in the desert that he could use for natural remedies, a snack for his horses or even soap. Through Atallah’s eyes, the desert became a rich haven of resilient wildlife, as thrilling and inspiring as the jungles of Central America.

His camp consists of black tents made of goat hair, which his mother wove by hand over a period of eight years. This is the central place to gather and socialize while sipping tea. They’re also easy to pack up and move.

Atallah told me stories of his tribe’s history as we sipped tea, tended to our mounts and explored his favorite canyons. Equal parts aural and visual communication, I left the Wadi Rum with a personal connection to the land and to Atallah’s world, one which I was fortunate to have experienced, even if for only seven days. It’s these sorts of experiences that stay with me – permanently.

I’ve been introduced to a natural form of Viagra in Uruguay and plants reputed by Belizean bush doctors to treat everything from diabetes to cancer and sunburns to snakebites.

Many locals I meet spend a lot of time camping or riding outdoors, and therefore know their environment intimately. I’ve been introduced to a natural form of Viagra in Uruguay and plants reputed by Belizean bush doctors to treat everything from diabetes to cancer and sunburns to snakebites.

When you are far from civilization, you must have an alternative way to get what you need to survive. Without exception, nature delivers – provided one knows where to look. This knowledge is often passed through the generations, and is one of my favorite things about seeing the world on horseback – really getting into nature, stepping away from the city, and experiencing what is really essential to life. The people with whom I travel make all of this possible.

As a woman rider, have you ever felt out of place or restricted among horse cultures that are male dominated?

No, and I feel that’s because it’s different when you are in the saddle. One of the unique things about equestrianism is that it can transcend gender bias. For instance, in equestrian sports men and women compete against each other on equal footing. I’m not an expert rider, and I’m not afraid to try new things.

Being competent in the saddle and being open to new ways of riding has helped me fit in with cultures less inclined toward gender equality. It’s also a conversation starter. Seldom is horse tack the same. Showing a natural curiosity and appreciation for others unique take on equestrianism continues to help me forge new bonds as a traveler.

People who are horse lovers, wherever they live, are generally pretty accepting if you are truthful about your riding abilities and open to learning their ways of horsemanship. When in doubt, ride the local saddle, even if you’ll be sore for a week.

Next Page
Tagged
Culture Interviews
What did you think of this story?
Meh
Good
Awesome

Defining the Role of Afropeans in Modern Travel Writing