As a horseback riding instructor myself, some of the scenes in Equitrekking made me nervous. While watching the Costa Rica episode, I thought, “Nobody is wearing helmets, and half those riders are drunk!”

Have you ever been apprehensive about doing things or riding in a different way than you are used to? 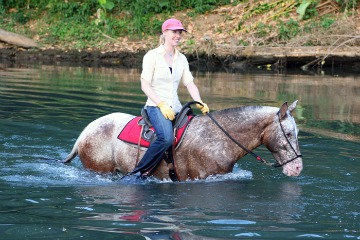 It’s a challenge to hop on a horse and just ride off and film in a new area, especially when our entire crew is on horseback in remote locations with expensive film equipment on horses we’ve never ridden. I’ve been apprehensive on many adventures. On most of our film shoots, I don’t have a lot of time to get acquainted with the horse I’ll be riding. I saddle up in alien-feeling tack with people who may or may not understand English, let alone the complications of filming a television show on horseback with a crew, which is also experiencing the same.

Because I’m trying something for the first time in a new land and I seldom know what I’m doing, I’ve learned to ask a lot of questions, never overstate my ability and keep my fingers crossed that all goes well. And it usually does. As a host who travels, part of what I try to communicate to viewers is that it’s okay not to know everything. It’s the by-the-seat-of-one’s-pants discovery that makes for adventure and leaves a great impact on a traveler.

In Iceland, riding with large herds of horses is a tradition. Because there are great distances to cover, people ride one horse and pony or hold onto another, so that when their mount grows tired, they can switch horses and keep up a good pace.

I’d only ridden my first Icleandic horse the day before, and I was put at the front of this horse drive, with fifty galloping horses behind me. I felt like I was being hunted.

Outside Reykjavik, neighboring farmers round up their horses for a weekly horse drive to Gullfoss, spectacular waterfalls that cascade into a canyon in Southwest Iceland. Though horse drives are less necessity and more cultural remembrance these days, it is still a very good way for Icelanders to train their horses.

I’d only ridden my first Icleandic horse the day before, and I was put at the front of this horse drive, with fifty galloping horses behind me. I felt like I was being hunted. It was a fast, jolting ride for me as we crossed crusty volcanic rock. Just as I was feeling worn out from the terror of my horse possibly tripping over the uneven ground below me or being stampeded, we reached a pit stop.

It was here my Icleandic friends further explained to me how to get my horse into the tolt, a supremely smooth gait Icelandics have developed while crossing jagged terrain over centuries in genetic isolation. At home in the US, most of my friends would have never ridden that fast over that uneven terrain, but it was no problem in Iceland and after doing it, I understood why. It’s second nature to those surefooted horses. Refreshed and newly informed, we tolted alongside a thirty story cliff that dropped off to a roaring glacier-fed river on the journey home. 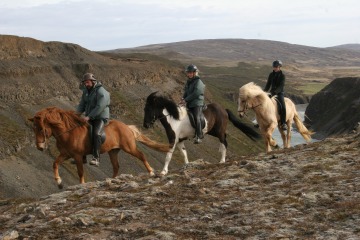 Local farmers Asa Dalkarls and her husband ride with Darley
alongside a cliff in Iceland.

I’ve herded bison with a cowboy in Utah, who warned me that bison, unlike horses can turn ninety degrees at full speed, and that I’d better keep alert. A cowboy in Colorado taught me the basics of riding championship cutting horses, which, to the uninitiated, is rather like being in a persistent car wreck.

These amazing horses jump sideways to cut out individual cows from the herd. They are athletes who react to subtle stimuli with impossible grace and speed – far faster than a human’s reaction, thus the whiplash-inducing movement. It’s quite a challenge to join these expert horseman, but also exceptionally rewarding to literally ride in someone else’s world and experience their daily life. It’s difficult not to respect cultural facets such as these when you experience them firsthand.

I’ve become a much, much more relaxed rider, and in some ways and a better judge of horses from these experiences. Horses are all wonderful, but some are more relaxed themselves, and I tend to prefer riding the quieter ones if I’m going to be out for several hours. Because we’re filming, many people want to match me to the most beautiful horse in the barn, but that’s not always the one you want to ride. I definitely choose brains over beauty when it comes to horses.

If you had to choose one horse culture in the world to live among for a one-year period, where would you go and why?

Now ask me again after I’ve gone there this summer, but I’d go to Mongolia, one of the last places left in the world where people are still living an equestrian-based nomadic lifestyle. For many Mongolians, life is dictated by the elements, much as it has been since the Bronze Age. Horse-riding nomads continue to herd cattle, goats and sheep and travel the vast grasslands, mountains and river valleys with the changing seasons, moving their homes and caring for their herds. Horses are prized possessions and equestrian sports that date back to antiquity continue to showcase the Mongol’s outstanding horsemanship.

I’ve been reading about Mongolia and researching it for years, hoping to one day get there. In my reading, I’ve learned about how much Mongolia is changing, so I’d like to experience the horse culture I’ve read about before it changes too much. 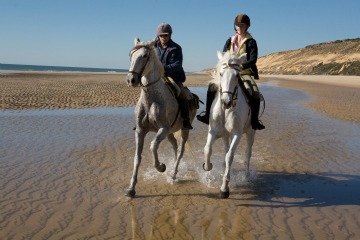 Alright, now for travel advice. What would be your top recommendations?

Day Trip – Haleakala Crater, Maui. Riding into the crater of a volcano tops my list of the coolest, most unusual places in the world to explore on horseback. At Haleakala National Park, you can descend over two thousand feet from the summit to the crater floor on horseback.

Traveling down, you look out into the volcano’s abyss with red, brown, purple, and green peaks and cinder cones. You hear the crunch of cinders beneath your horse’s hooves as you conquer switchbacks down the Sliding Sands Trail, passing by the prickly Haleakala Silversword, a rare otherworldly looking plant found only there. You have to be in good shape for this ride. It’s strenuous because of the dramatic change in altitude and the intense sun, but an experience not to be missed.

Overnight Trip – Canadian Rockies. Riding horses on a pack trip, where you camp out, can quickly take you far into the wilderness. In Banff National Park in the Canadian Rockies, you ride through dense woods where the earth is covered in thick moss to openings that reveal tall mountain peaks that resemble Ansel Adams’ photographs.

We rode to Mystic Lake, whose secluded glacial fed, emerald colored water is surrounded by snow-capped peaks. The scenery was stunning, but even better was being entirely away from technology and the modern world. There’s no vehicle access on these trails, so you have to ride or hike. You find yourself in your own little world of natural beauty, nighttime fires and nature. 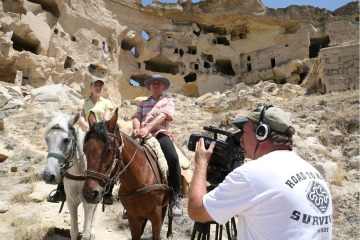 Advanced Trek – Cappadocia, Turkey. It’s a cool experience to be able to literally travel on horseback. You can ride village to village in Cappadocia, really covering some terrain. Horses take you through bizarre fairy chimneys and to these small, old villages where not a lot of tourists trek.

You ride back in time, traveling along part of the Old Silk Road. Ahmet, a local who guided us, knows everyone in the area, so we’d stop at a village home to drink ayran, a popular salty yogurt drink, or hot tea. We meet local poets and musicians and artists, people we would have never interacted with if we hadn’t been with a local. I’ve actually gone to Cappadocia to ride twice now.

What are your travel and horseback riding plans for 2011?

If anyone has suggestions, let me know. That’s how we find the places that we film, through people who have been there and done it themselves. That’s so important to us. We’ve filmed 33 episodes now in diverse locations, but there’s so much to see. There’s not enough time in life! I’m just trotting along as fast as I can.

Equitrekking‘s new season is broadcasting on PBS stations across the US now. Starting March 30th, the show will broadcast Wednesdays and Sundays at 9:30 am, 3:30 pm, 9:30 pm and 3:30 am ET on Create TV, a Public Television lifestyle channel that reaches over 82% of the US.

Have you ever ridden on horseback in a different culture?

Prev Page
Tagged
Culture Interviews
What did you think of this story?
Meh
Good
Awesome