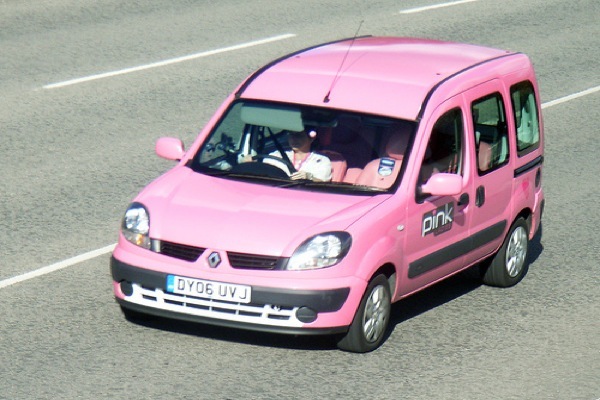 Do pink taxis solve a machismo problem or simply add to it?
The central Mexican city of Puebla has recently introduced a new fleet of thirty-five taxis for women only.

THE TAXIS ARE driven by women and are open only to female passengers; they’re also painted a Pepto Bismol pink and contain GPS systems and special makeup mirrors in the backseats because you know, women like to spend most of their time en route meticulously applying lipstick.

The taxis have received an enthusiastic and positive ground level response from women, but Mexican women’s rights organizations find the idea appalling. Vianeth Rojas, a member of the Network For Sexual and Reproductive Rights in Puebla, told the Associated Press “[The taxis] are absolutely not helping eradicate violence against women.”

The new cars are meant to protect women from harassment (or worse) from male taxi drivers, and come in response to frequent complaints from Mexican women of being accosted by male drivers. Yet one has to wonder, is creating a fleet of candy-pink cars with makeup mirrors really a step forward for women’s rights, or is it simply reinforcing the same macho attitudes that lead to these harassment problems in the first place?

Female-only taxis exist in many parts of the world, including Moscow, Lebanon, Colombia, and Dubai, in response to security issues and cultural attitudes about how women can travel and who can accompany them. In cultures in which contact between women and men is strictly regulated, such as that of Dubai, women-only taxis may be unpalatable to foreigners but at least seem fit the cultural context.

But in a country like Mexico, in which there are no taboos against women traveling with men who aren’t their husbands or brothers, the taxis seem to me a band-aid solution to a social problem, not an expression of an inherent cultural belief. The taxis announce, in pink, that women are girly, delicate creatures who need to be protected from the leering tendencies of men, who need a chance to pretty themselves up for their men in the safe company of other women.

The cars also imply that the men who accost women simply can’t help themselves, and should be separated from women instead of asked to change their behavior.

What do you think? Would you ride in a pink taxi? Do you think this is an effective solution to the problem of harassment? Most readers here thought it was a great idea. What do you think, Matadorians?

Kick off the debate below.