Study abroad offers insight not only into a foreign culture, but into our own. This is especially true for US students studying in Mexico. The two countries are connected not only by geography, but history – most of the southwestern US belonged to Mexico until 1846 – and immigration, which has given new vitality to Mexican culture within the US.

As you consider the many different study abroad locations, programs, and living arrangements in Mexico, keep this question in mind: How far are you willing to step outside your comfort zone in order to immerse yourself in another culture?

The key to a rewarding study abroad experience is finding the level of immersion that is right for you.

Some locations in Mexico offer a greater degree of culture shock than others. In northern Mexico and many urban areas the pervasiveness of US consumer culture makes for an easier adjustment to life abroad.

This ease of adjustment, however, makes it more difficult to experience what is unique about Mexico. The same applies to coastal resort areas, like Cancun and Acapulco, where you often see as many foreigners as Mexicans.

Southern Mexico, on the other hand, is less economically developed, but rich in culture. Centuries-old indigenous traditions endure in the food, music, dance, and dress.

But to put the crime rate in perspective, consider that many Mexicans have a similarly grim picture of violence in the US from watching news footage of school shootings like the one at Virginia Tech.

Do not be frightened away by reports of political unrest. The only Zapatistas you’re likely to encounter in Chiapas are the Comandante Marcos dolls for sale in the markets. While deep socioeconomic disparities make political unrest inevitable, it poses little danger to you as a traveler.

Like southern Mexico, Mexico City is a study in contrasts. It bombards your senses with dizzying extremes of high culture and abject poverty.

Unfortunately, Mexico City is as famous for its violent crime as its pyramids, murals and museums. For many students, the risks are far outweighed by chance to live at the center of art and culture, not only of Mexico, but all of Latin America.

But to put the crime rate in perspective, consider that many Mexicans have a similarly grim picture of violence in the US from watching news footage of school shootings like the one at Virginia Tech.

If Mexico City is too intimidating, consider Guadalajara, home of the Mariachi, or the equally lovely and more manageable sized colonial cities of Guanajuato, Cuernavaca, Morelia and Mérida. 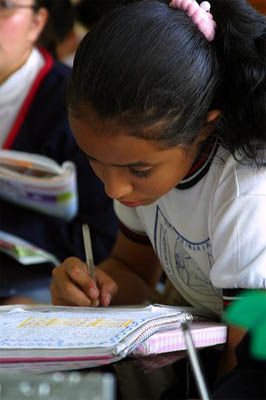 Almost all study abroad programs bill themselves as “immersion” programs; what this actually means can vary considerably. The level of immersion is determined by two factors: the type of school you will attend and your living situation.

Private language academies, such as Instituto Jovel in San Cristóbal de las Casas, Chiapas and the Ollin Tlahtoalli Spanish Center in Oaxaca provide a supportive environment, especially for beginning students. The classes are small and often held outdoors in scenic gardens or terraces.

Most schools supplement their language programs with workshops in traditional art, dance and cooking. Many also offer you the opportunity to volunteer with community organizations like Oaxaca Street Children.

The drawback is that you will be taking all your classes with other foreigners, which limits your opportunities to interact with Mexicans. As a way to compensate, most schools offer intercambios, or exchange programs, that match you with a Mexican conversation partner.

For students with higher proficiency in Spanish, I recommend programs like those offered by the Butler University Institute for Study Abroad which allow you to take regular university classes alongside Mexican students. Being plunged into an unfamiliar education system is bewildering at first, but your Mexican classmates will be only too happy to help you navigate the cultural differences.

This is also a good option for students of disciplines other than Spanish, as universities have more diverse course offerings. The National Autonomous University of Mexico in Mexico City is the largest and most prestigious university in Latin America.

Also excellent are the Monterrey Institute of Technology and University of the Americas in Puebla. 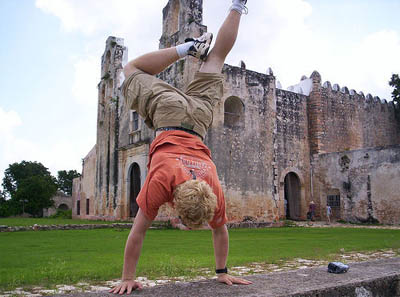 The most common living arrangement for student abroad participants is a homestay. Some programs place you in dorms or other group housing. A few offer private apartments.

Programs build high expectations for homestays; students expect to be effusively welcomed into the bosom of their new Mexican family. Sometimes this happens. More often than not, host families treat participants with hospitable reserve. For most of these families, this is a business first.

You’d also be surprised how many participants find themselves speaking more English than Spanish at their homestay. This is because families usually host more than one foreign student at a time.

Even if you specifically request your “own” host family, your program may not be able to accommodate you; it just doesn’t make financial sense for the families they work with.

Dorm situations and other group housing offer a more independent lifestyle. You have greater freedom to come and go whenever (and with whomever!) you choose. However, you inevitably end up spending more time socializing with your foreign roommates (in English!) than with Mexicans.

Overall, if you focus on finding the right level and kind of immersion for you as an individual, these seemingly overwhelming questions about locations, programs, and housing will fall into place.

Connect with other travelers in Mexico as well as local experts, check out local orgs , read blogs about Mexico, and more, all at the matador community.

What did you think of this article?
Meh
Good
Awesome
Bookmark
Posted In
Travel
Destinations
Mexico

Tijuana, the City of Migrants, is Mexico’s most underrated food city