During the holy month of Kartika, the devout descend on the town of Pushkar in Rajasthan, said to be the spot where Lord Brahma dropped a lotus flower to form the lake around which the town is built. Tens of thousands of believers come to bathe in Pushkar Lake, more and more each day as the full moon, the holiest day, approaches.

Simultaneously, tourists descend on the town for the Pushkar Camel Fair, a concurrent event that’s one of the largest livestock fairs in the world. If you get there early you can watch camels arrive in streams over the horizon, tens of thousands of them. Tent cities pop up around the fairgrounds for the herders and their families. There’s an arena for events, which run all week long, and several Ferris wheels are erected. The dusty streets leading into Pushkar are lined with stalls selling everything from precious cashmere to camel decorations.

The sacred movement of over 50,000 bathers is pushed right up against the seemingly outlandish spectacle of 50,000 camels, and for two weeks Pushkar expands to nearly 200,000 people. Here’s what one of my days at last year’s fair looked like. 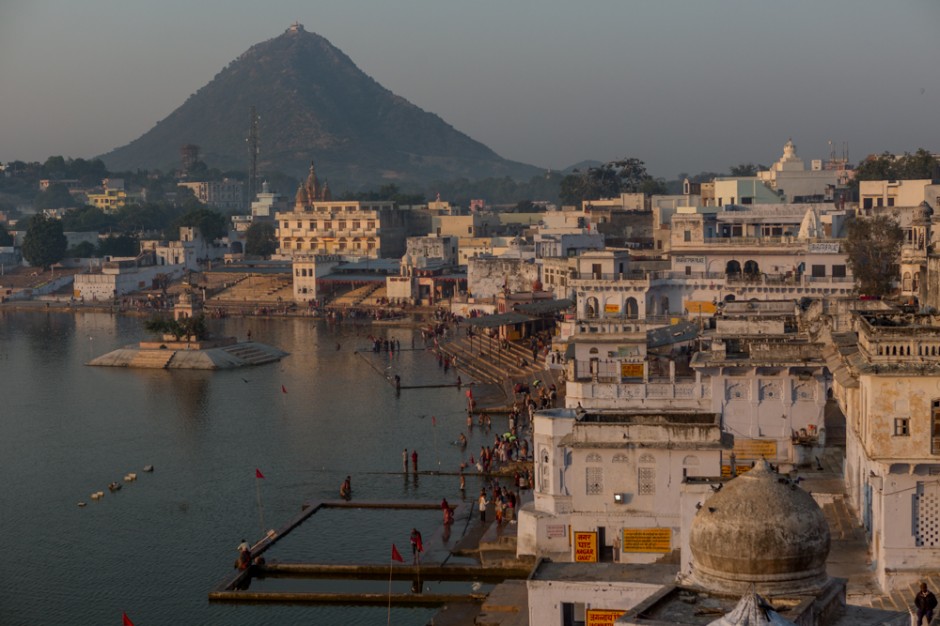 Devout Hindus take to the lake at dawn, while the city soaks in the warm, orange light of the rising sun. There are 52 bathing ghats in Pushkar, and while it's not permitted to photograph the bathers, it's impossible to get a shot of the town without at least a few in there. 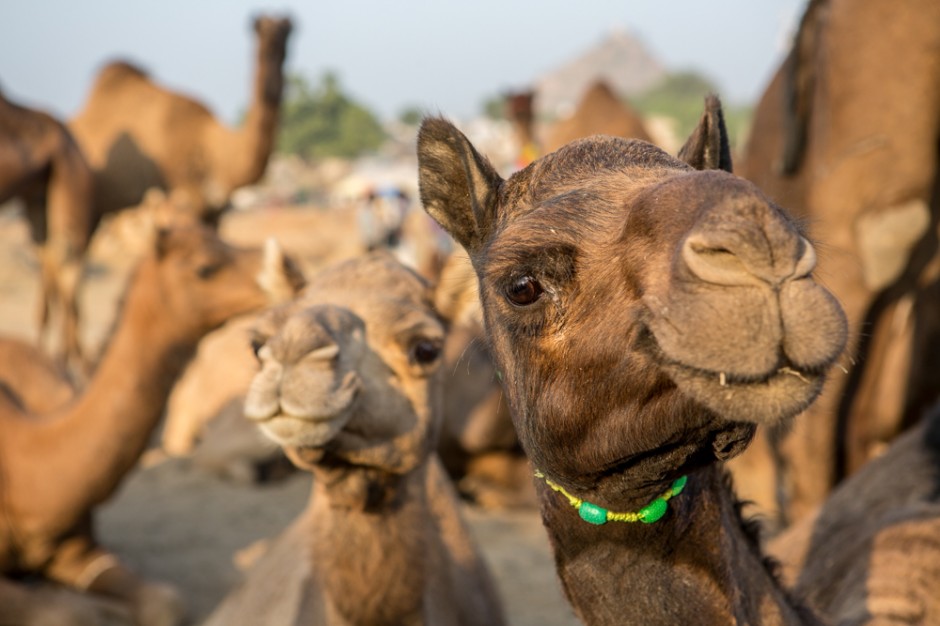 At 6:30am, visiting photographers are out in full force to capture the morning light. I see Nat Geo media tags, big-shots with assistants, and more coveted "beige" lenses and mammoth zooms than a Canon convention. Many of the herders are trying to dodge cameras while going about their morning business. I decide to focus only on the camels until I can crack a smile from a herder. 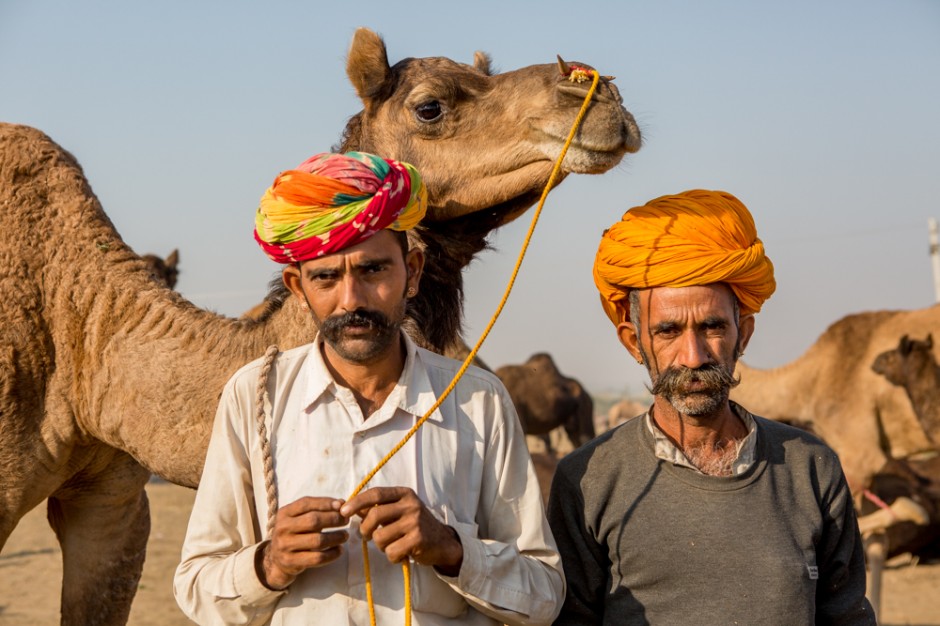 It works. Not only do I manage to make these two giggle—by laughing at myself when I step in one of the many mounds of camel dung—but when they're done shaking their heads at me, they immediately ask me to take their photo with a prize camel. 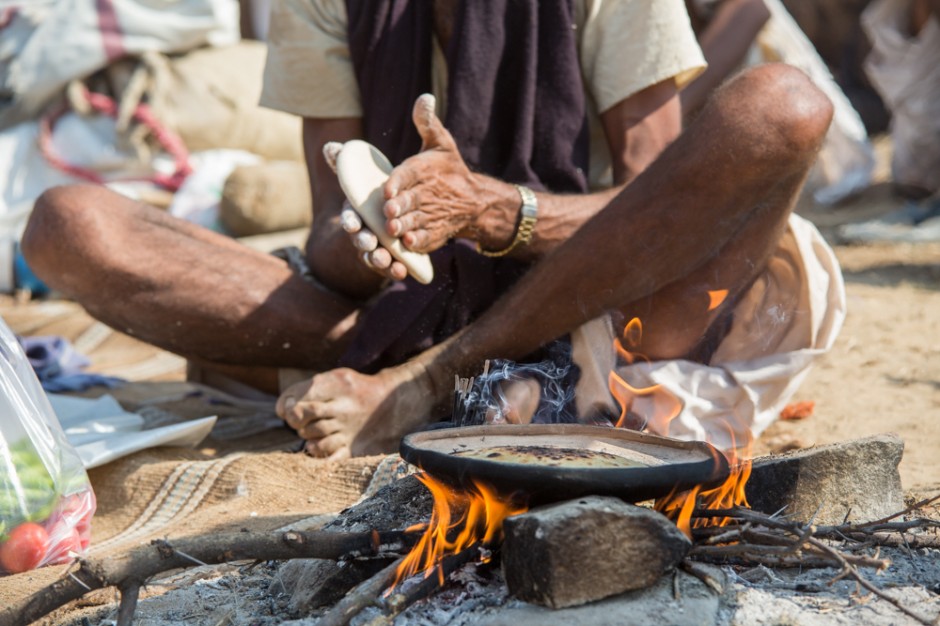 And just like that I'm welcomed for morning chai and breakfast. For the most part I put my camera to rest and enjoy watching the fairgrounds wake up—sitting by a warm fire, eating freshly made fire-roasted chapati, sipping on chai, and being scolded for my tattoos. 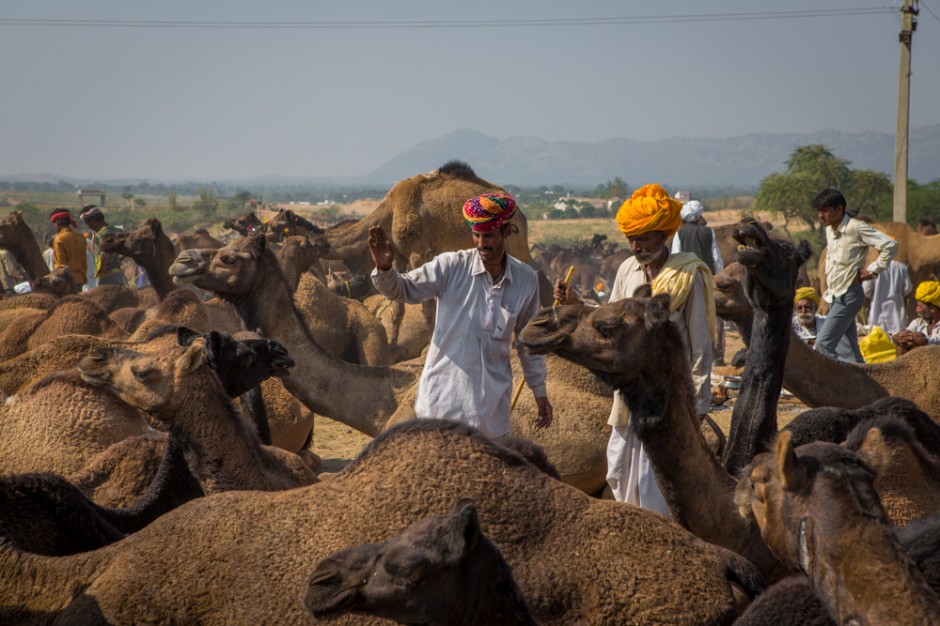 The buying and selling of camels is the central purpose of the fair, and it’s not lost in the mix. Herders—all men—wander through the throngs of camels, checking everything from hooves, to gait, to teeth. What they barter about, I could not tell you, but it was mesmerizing to watch. 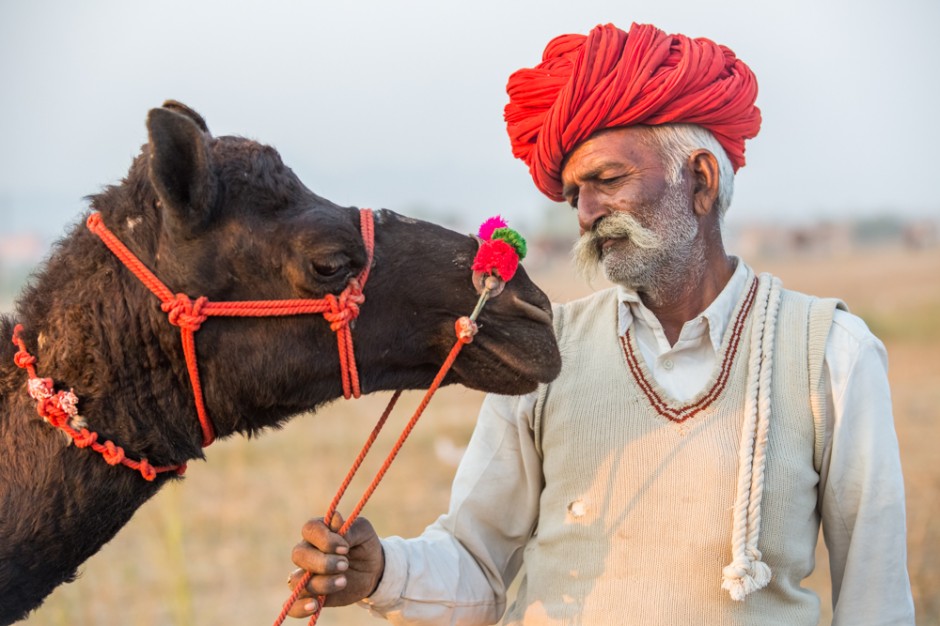 This fellow is deciding how he feels about this particular camel. The animal has a foot injury, but it's just a baby, full of potential, and is being offered at a good price. Pushkar window shopping. 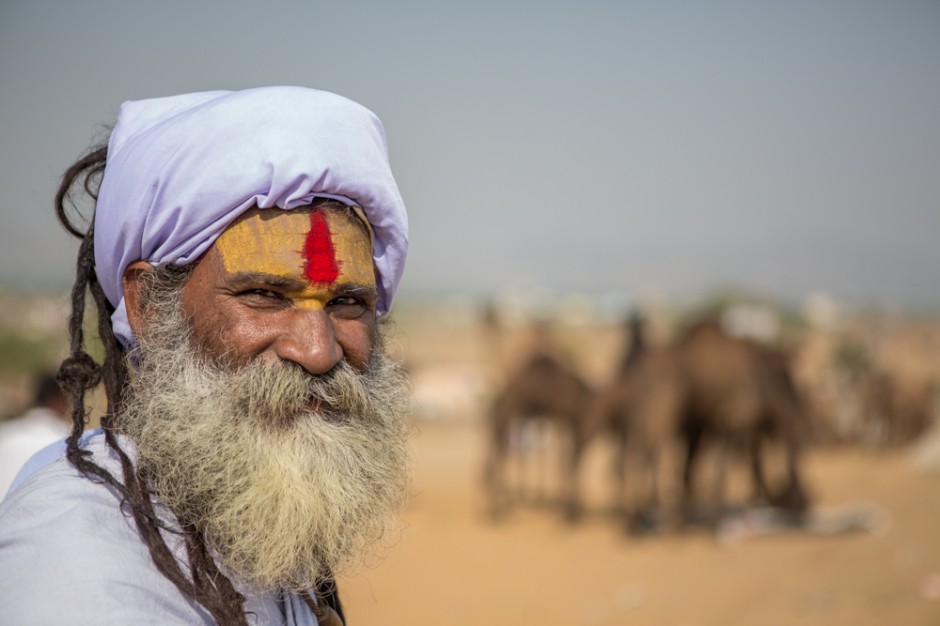 Holy men wander both the lake and the fairgrounds, carrying small tins to accept donations. They're referred to as sadhus or, more fondly, babas. Sadhu life is a hard one: They cut family ties and devote themselves to their faith, traveling in pilgrimage from city to city to the end of their days. 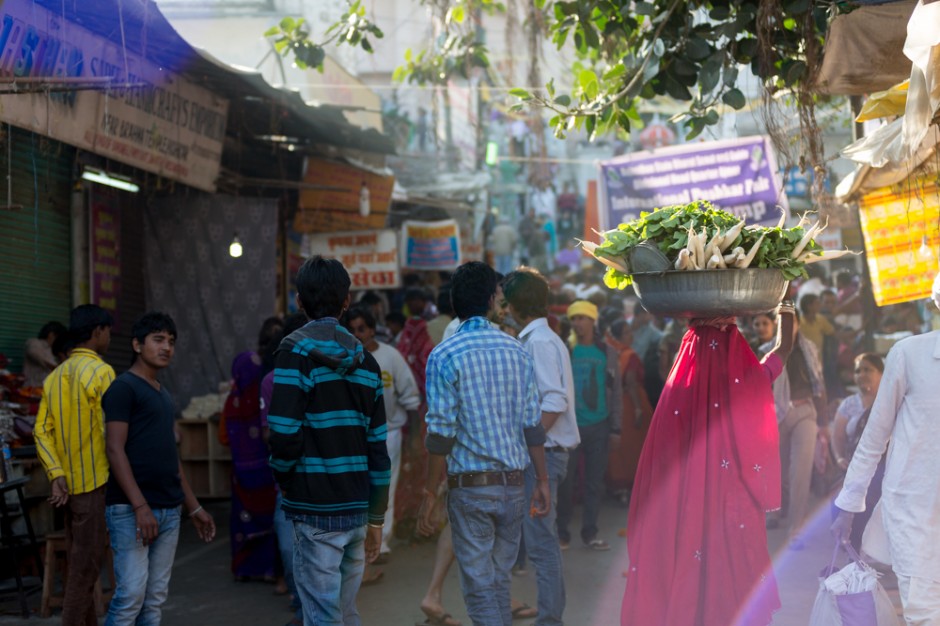 I take a long break during oppressive afternoon heat to drink fresh lassi (yogurt) and rest. While the fairgrounds are wide open, the ancient streets of Pushkar are narrow and winding. With so many people, it’s literally shoulder-to-shoulder, and intersections sometimes come to a standstill. 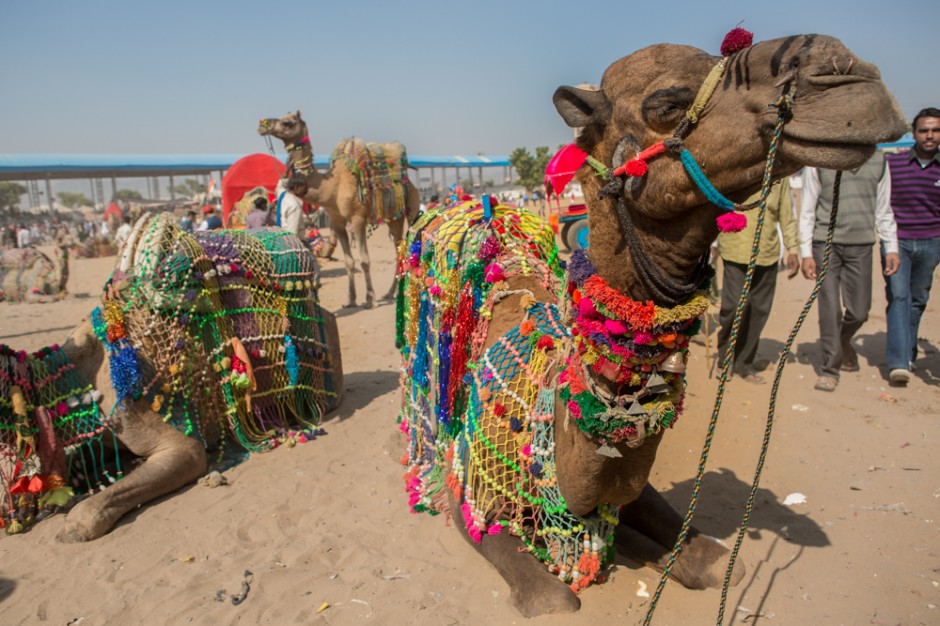 After hanging out on my hotel's open veranda, which looks over the lake, I decide the heat of the day has mostly passed and head back to the fairgrounds for sunset. En route, I stop at the Pushkar Arena, where one finds the camel decorating contests, mustache contests, and other events. 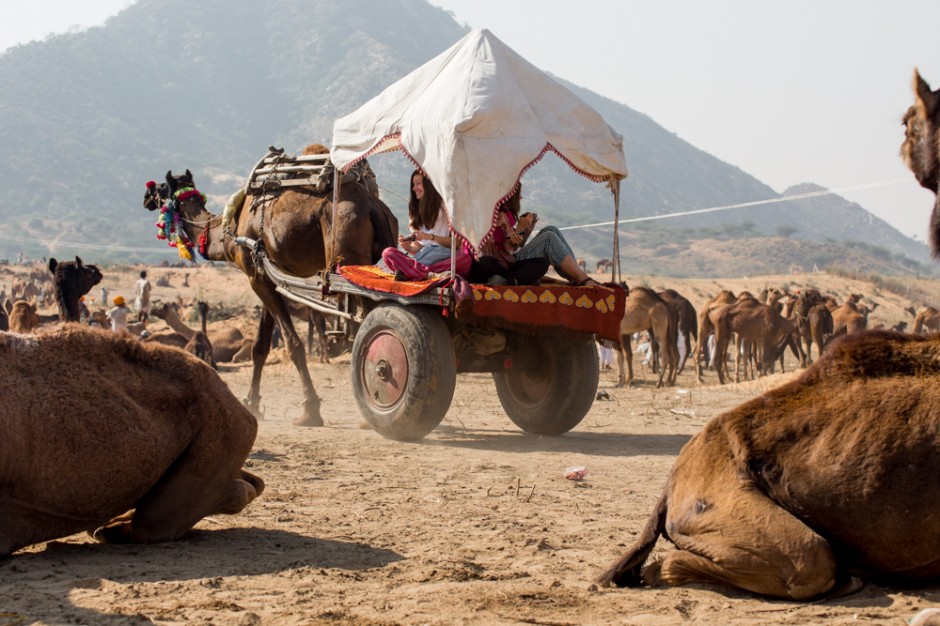 Caravans pull tourists through the fairgrounds. I'm envious of this shady, restful mode of transport, but I feel the grounds are best experienced on foot. If I'd not been on foot, I never would have had breakfast with camel herders at dawn or shared their traditional pipes at dusk. 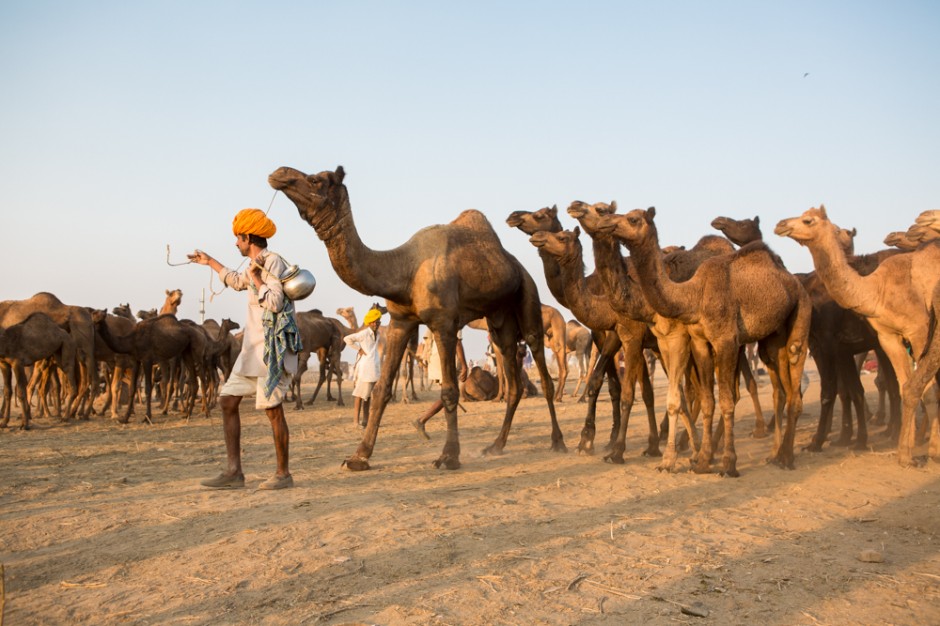 The sun lowers on the horizon, and the herders begin to pack up their camels and spread out for the night. Some leave all together if their business has been accomplished. All across the fairgrounds, smoke spirals into the hazy orange sky as herders and their families begin tending to dinner. 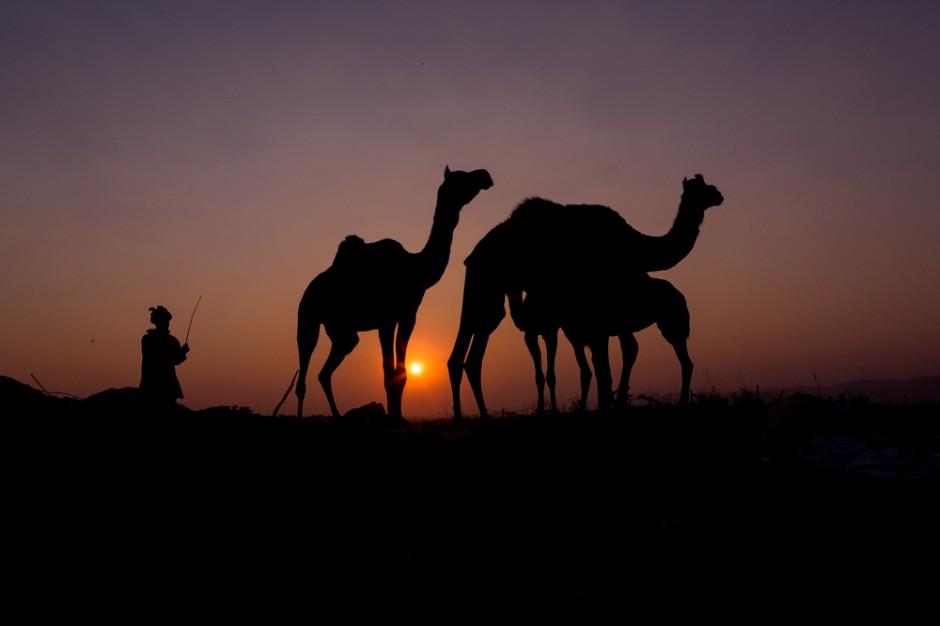 Dusk arrives and the sun droops further. The sky stays pink for a long time. Everything feels still. 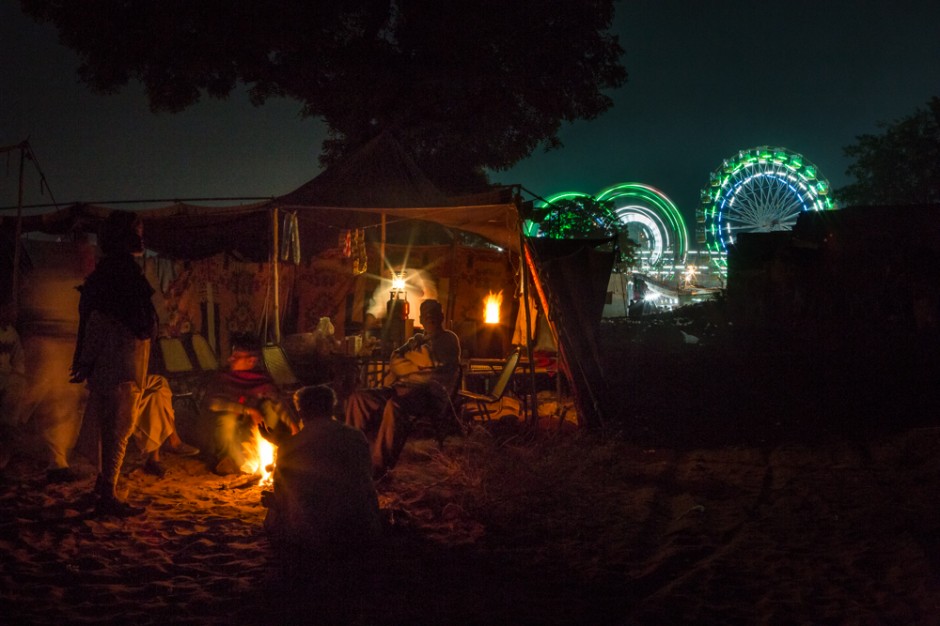 Families gather around their fires in the tent city, a low murmur of Hindi, Punjabi, and other dialects. Fires hiss and crackle, while vagabond sparks whirl through the night air, which has grown cold. Behind this family, the Ferris wheels turn late into the night. 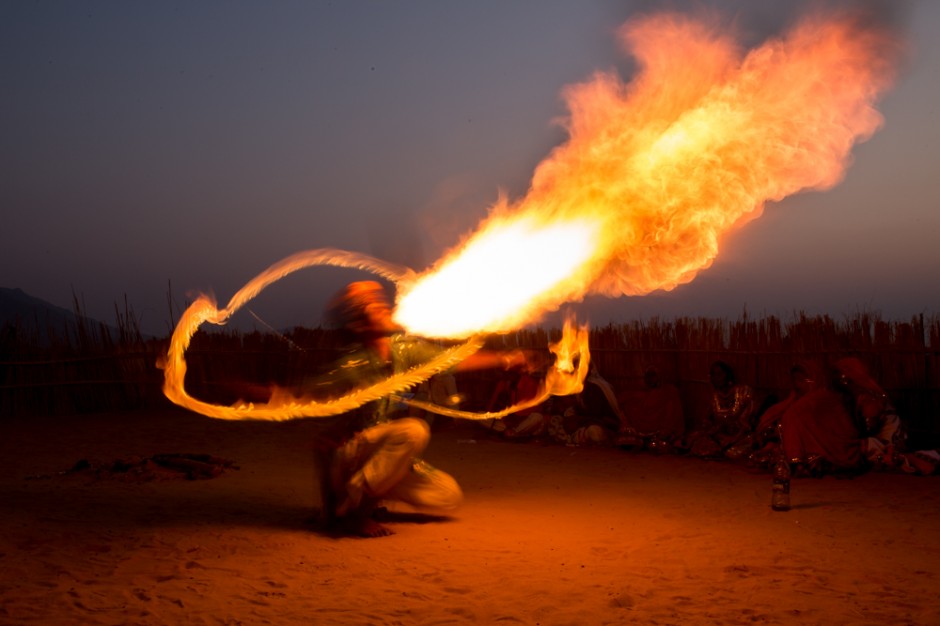 Pushkar does anything but sleep. Restaurants are full of tourists; the narrow streets teem with Indian families buying deep-fried sweets and samosas; others take to the fairgrounds for the Ferris wheels or to purchase new bangles, brightly colored saris, or ornate, hand-woven rugs. Holy men and devout Hindus burst into song, dancing and drumming up and down the alleyways. Here, a fire twirler from a gypsy troop performs for tourists outside the city. 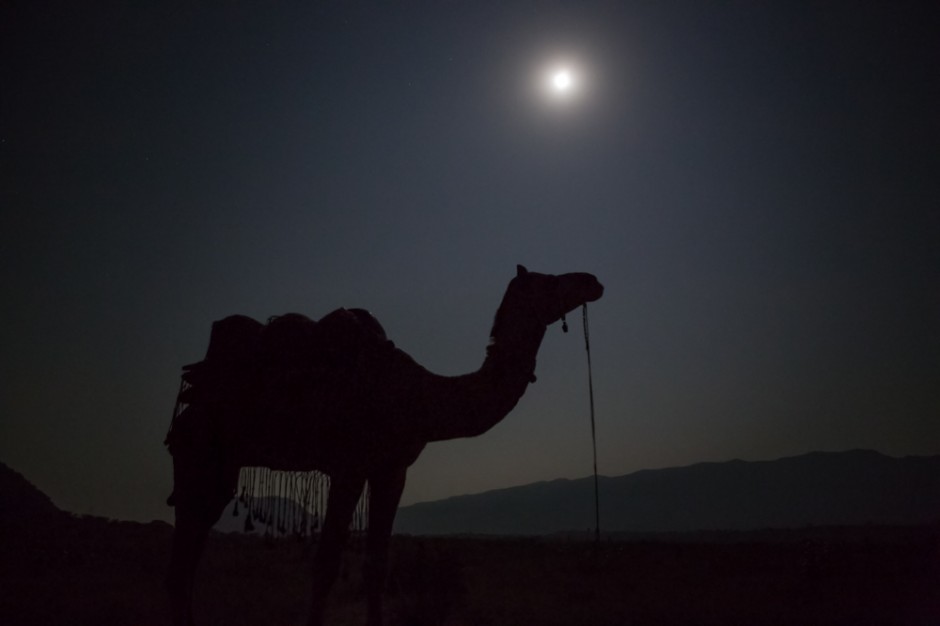 Tagged
Festivals Galleries SanDisk: Telling Life’s Stories from Memory
What did you think of this story?
Meh
Good
Awesome
✖
travelstoke
Download the mobile app
stoked by