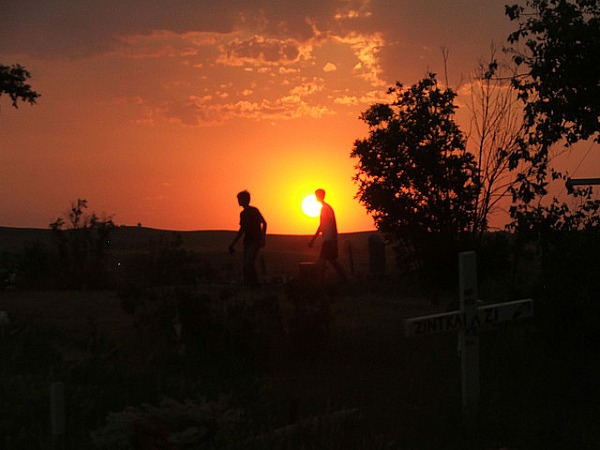 Far from a household name, Avrol Looking Horse leads the Lakota Tribe in trying to shift mankind’s energy toward peace.

HE MET WITH Desmond Tutu and with the Dali Lama. He spoke on world peace and religious freedom at Harvard, Yale and Dartmouth. He traveled to Iraq to pray for global healing. He carried his concerns to the United Nations. He received the key to the city of New Orleans. He was a guest at the “Wiping of Tears” ceremony at the World Trade Center bombing site in New York.

We are the watchers. We are the witnesses. We see what has gone before. We see what happens now, at this dangerous moment in human history. We see what’s going to happen, what will surely happen unless we come together…to restore peace and harmony and balance to the Earth, our Mother.

His life focus has been a commitment to work toward peace, religious freedom, and the survival and revival of his culture. His name is one you probably have never heard: Arvol Looking Horse. 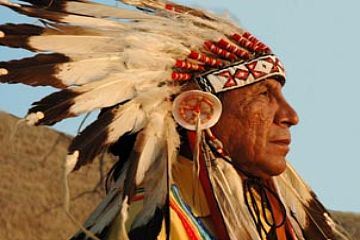 To get to the Cheyenne River Reservation, you can take a plane to Pierre, the capitol of South Dakota, and rent a car for the two-hour drive northwest.

The people on the reservation welcome tourists, particularly because they need the money that tourists bring; the population of 8,000 has an unemployment rate of 86%.

Arvol Looking Horse was born here in 1954. When he was only twelve years old, be became the nineteenth generation Keeper of the Sacred White Buffalo Calf Pipe, one of the most important Lakota spiritual positions. He was the youngest in his tribe to hold this duty, and he continues as the chief and spiritual leader of the Sioux tribe.

We are the only species that is destroying the Source of Life, meaning Mother Earth, in the name of power, mineral resources, and ownership of land, using chemicals and methods of warfare that are doing irreversible damage, as Mother Earth is becoming tired and cannot sustain any more impacts of war. I ask you to join me on this endeavor…to pray and meditate and commune with one another, thus promoting an energy shift to heal our Mother Earth and achieve a universal consciousness toward attaining Peace.

I see Native American spirituality more as an orientation in life rather than a religious practice, in which an individual’s inner life purposely develops to connect with the larger reality. Arvol Looking Horse does not see himself as a religious person, but as a spiritual being; a spirituality that breathes life into his social structure and his culture.

He has always lived on the reservation, working towards peace and the desire to save our planet from destruction by humankind. 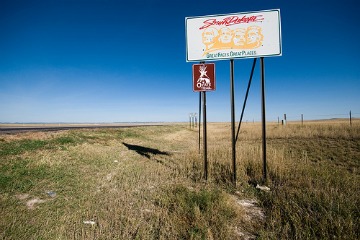 As I drove north from Pierre towards the reservation, the land was flat and the sky huge, meeting in a bumpy line on the distant horizon. Pulling over to the side of the road and turning the car off, I could hear the prairie wind gently bend the grass that surrounded me.

After a few moments, listening very carefully, I discerned a faint, distant thunder that slowly grew louder and louder, as the earth beneath my feet began to tremble. Suddenly a vast herd of bison appeared, a cloud of dust following in its wake.

North of Eagle Butte, the tribal headquarters of the Cheyenne River Sioux, there is water – rivers and gullies and hilly, grass covered rock. The reservation is abundant with running water, bordered by the Missouri River on its eastern edge, the Cheyenne River on its southern border, and the Moreau River runs through the center of the reservation.

And yet this nation is one of the most impoverished in the United States and does not have an efficient water system to support its residents.

The people living on the reservation must rely on groundwater that is of extreme poor quality. This water supply exceeds federal standards for maximum levels of impurities, as well as containing unacceptable amounts of iron, sulphate, and dissolved solids. The enamel of children’s teeth is damaged by the high concentration of fluoride in the water.

Looking into the eyes of these children, I saw both a proud history, and much pain and suffering. But when their faces broke into gleeful smiles, ready for fun, they looked like children anywhere. The adults however, are different; hopelessness is etched on each countenance. 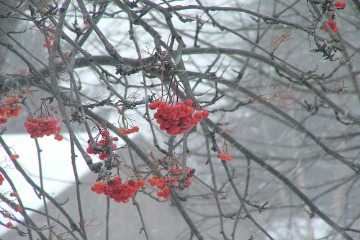 It isn’t the Black Hills or the Badlands that I picture when I think of South Dakota. My daydreams always return to the plains, the rolling land, the grasses, and the bison.

I’ve never visited South Dakota in the winter for good reason. The blizzard of January of 2010 is a perfect example of the extremes Mother Nature can lambaste us with. The Cheyenne River Reservation suffered a blizzard in December 2009 that soaked up their entire budget for plowing and snow removal.

In January a windstorm struck, breaking off power lines like they were straws blowing in the wind. Then the “big” blizzard struck, and cut off water supplies. Imagine 42 degrees below zero with no running water and no electricity. Wearing your woolies to bed just won’t do it.

When spring again arrives and the prairies are green with new grass and resplendent with wild flowers blooming in pinks and yellows and blues, it is hard to believe the harshness of winter could strike again. Yet, though the land is breathtaking in summer, life on the reservation is harsh all year round.

The Sioux have always believed that everything gathered should be shared equally, and that survival requires a cooperative effort on the part of all. They believe that mankind is unable to find peace because in peace there is no need for power. Unfortunately, the human race has not yet learned to live without power.

They believe that mankind is unable to find peace because in peace there is no need for power.

Chief Looking Horse, probably the most famous Native American spiritual figure today, continues to speak not only for his suffering people, but also for humankind, and most importantly, for the survival of Mother Earth. Though I’ve never had the opportunity to meet Looking Horse, he amazes me.

In the very middle of the United States, there is a nation of peaceful people with a spiritual leader whose concerns are not only about his home, but, generously, about everyone everywhere, worldwide. And at the same time, his nation is one of the poorest in the western world, with an astounding rate of alcoholism and depression, and the highest teen suicide rate in the nation.

Do you think mankind will ever learn to live without power? Share your thoughts below.