I recently went to Japan to experience and document kyudo, the ancient art of Japanese archery. It literally means “The Way of the Bow” and is considered by many to be the purest of all the martial arts. Originally a samurai discipline and heavily influence by Shintoism and Zen, kyudo integrates technical skill with the development of a completely focused and disciplined mind.

I met Kazuhisa Miyasaka Sensei in Yamanouchi town, where he manages his own ryokan — a traditional Japanese inn — and teaches the art of the bow. During the course of three hours, he explained the history behind kyudo and its tools: “Thousands of repetitions, and out of one’s true self perfection emerges.” It takes a minimum of 30 years to master the grip of the bow. Despite this, he allowed me to shoot a target from about a meter away. “The outdoor target is for samurai only,” he told me with a smile.

Back in Australia, I couldn’t stop thinking about my kyudo experience and started a personal quest to study this dynamic expression of the Japanese spirit. There are no kyudo schools down-under, nor are there many archers who have ventured in this direction, but I found Samantha Chan on Facebook and invited her to be the subject of a photo essay. With the collaboration of the Sydney University Archery Club, we organised the photo shoot on the grounds of St Paul’s Oval, Sydney University. Samantha lived in Japan and practiced the way of the bow for about a year with the Kagoshima University Kyudo Club. 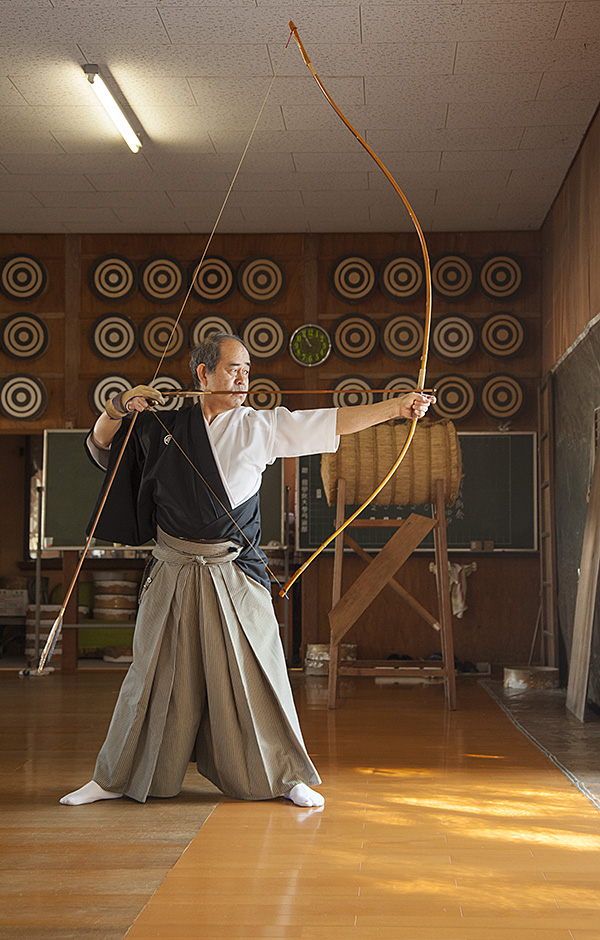 Kazuhisa Sensei possesses great dignity and grace. These qualities, coupled with his skill and knowledge of kyudo, make him the perfect model of a master. His dojo, or the "place of the way," is full of pictures, certificates, diplomas, and targets hanging on its walls, clearly displaying his position and the high regard in which his accomplishments are held. 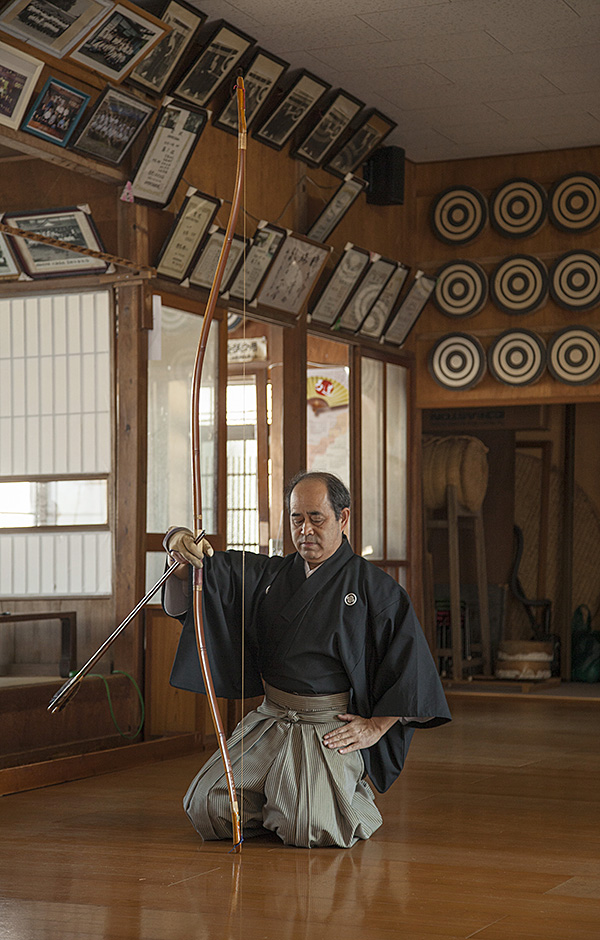 The hassetsu are the eight fundamental stages that make up the practice of kyudo and include ashibumi (footing), yugamae (the readying of the bow), and hikiwake (the drawing of the bow). The emphasis on proper form is stronger in kyudo than it is in Western archery. 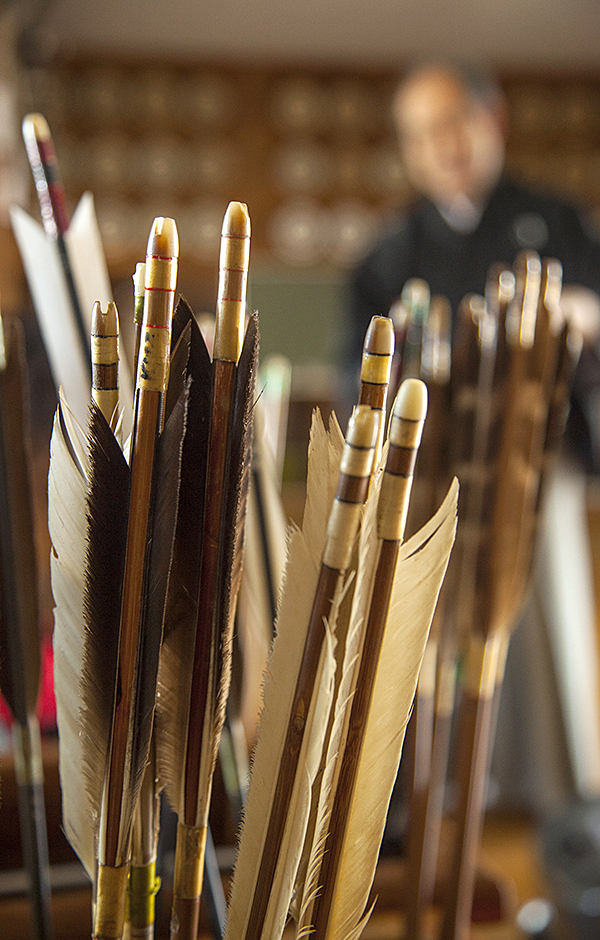 Arrow feathers come from all kinds of birds, but the most prized are the ishiuchi, or the tail feathers of the hawk and eagle. In a traditional kyudo shooting session, two arrows of differing curvature are shot one after another. Feathers for the haya, or first arrows, have a natural curve to the left, while those used in the otaya (second arrows) curve to the right. 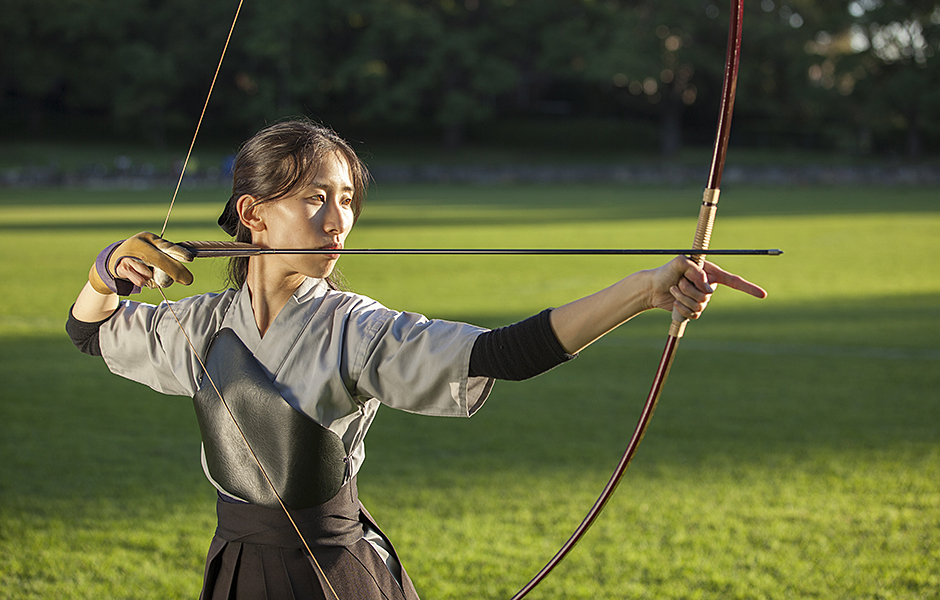 Samantha comes from a different kyudo school, clearly indicated by her uniform, but the shooting protocol remains the same. Components of the standard practice uniform include a kimono-like top (kyudogi), a divided skirt (hakama), split-toed socks (tabi), and a cloth belt (obi). Women also wear a leather chest protector (muneate). In this picture, she demonstrates the kai, a posture that precedes the release, where the arrow is drawn so that the bottom feather binding is positioned a couple centimeters behind the corner of the mouth. 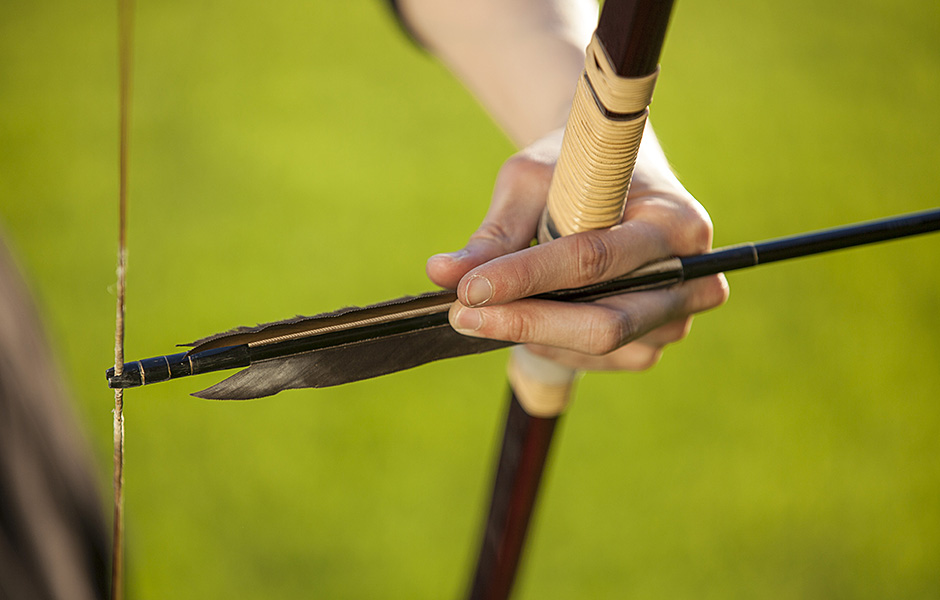 Achieving a clean release of the arrow is one of the more challenging elements of kyudo. The arrow is nocked and held in place with the left hand. The string has no marked nocking point; the bow has no arrow rest on it. The shooting depends entirely on the archer’s posture and intuition. 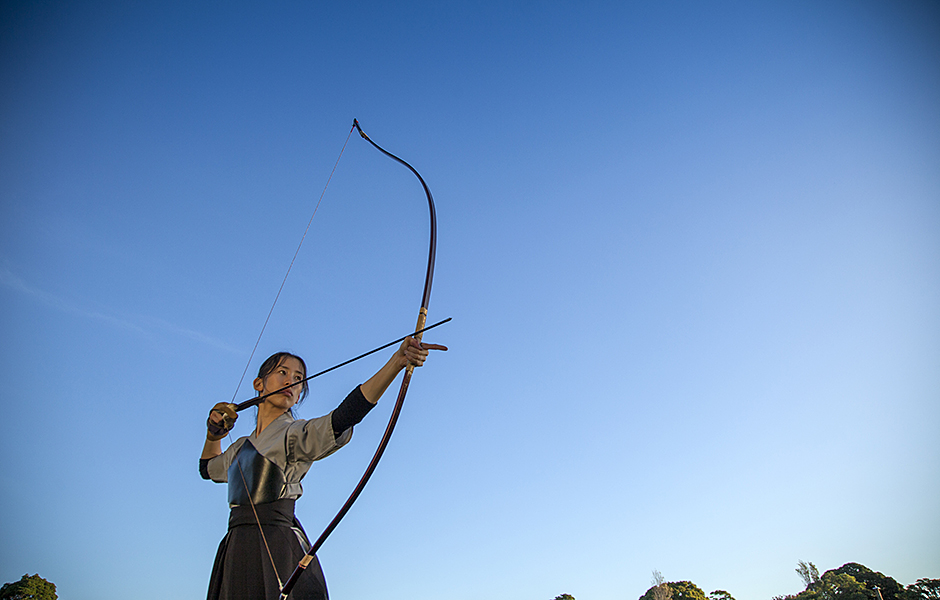 When you see a demonstration of kyudo for the first time, you understand immediately that it's not a 'sport.' Neither is it a martial art you would practice in order to obtain degrees or belt ranks. According to the Japanese Master Kanjuro Shibata: "It's a matter of precision and discipline – the relationship you have with the bow, the arrow, your body, and your mind...it's a kind of standing meditation." 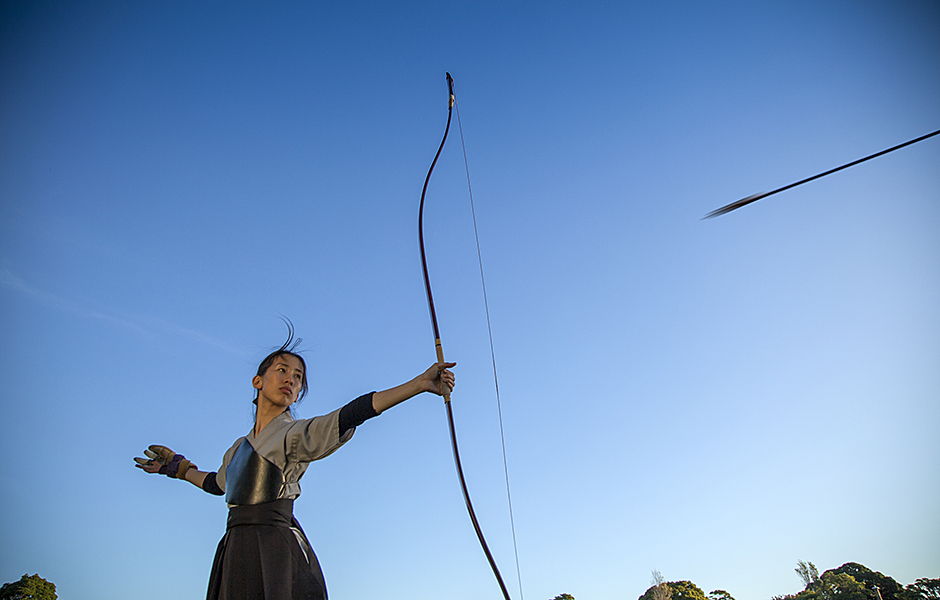 The release is termed hanare, and the action will cause the bow to rotate, the string swinging to touch the outer left arm. This action is called the yugaeri. After almost two hours trying to capture the 'right moment,' the image finally revealed itself on my camera screen, with the arrow crossing a blue sky towards the target. 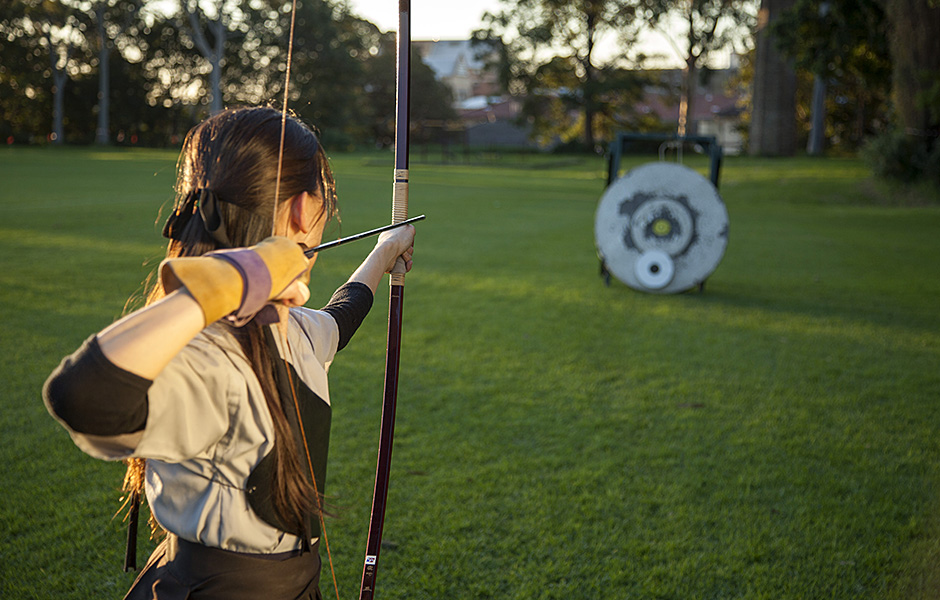 Kyudo is about much more than hitting the target. It's a life metaphor and a reflection of our inner selves. As with any other highly technical skill, you can't master it without mastering yourself.

Tagged
Outdoor Japan
What did you think of this story?
Meh
Good
Awesome