View all travel news
Top Destinations
Top CitiesView All Destinations
Trending Regions
Trending Cities
Load More
In Nahanni National Park Reserve, Cody stayed at a lodge built by the descendents of the tribe who’ve called the location home for centuries and climbed their sacred mountain, learning a few timeless lessons along the way. This post is part of Matador’s partnership with Canada, where journalists show how to explore Canada like a local.

The signs on the land are a reminder of the teachings of the legends. If we remember and live them, if we take the signs set on the land for us as our symbols, we will survive as a nation.
– “Denendeh, A Dene Celebration”

ALL THE OLD STORIES AND LEGENDS begin when the earth was young and mankind was bound to the land. In the far north of the world, where compasses spin and lights dance in the sky, the old legends are still told by the Dené people, continuing the ancestral teachings of living in harmony with the land, for it’s known in the north that only those who live in this way can survive in one of the most demanding environments on earth.

Dené is the Athabaskan word that loosely means “people” and literally breaks down into the two words De meaning “flow” and Ne meaning “Mother Earth.” The Dené people today are a group of several tribes who call the north home. While each regional group has its own language and customs, all share a common ancestry, and the region they inhabit in the Northwest Territories of Canada has always been known as Denendeh, which means “the creator’s spirit flows through this land.”

Spending time in Denendeh, the power and energy of the land is difficult to ignore, as each river, lake, and mountain has its own spirit, and each has a legend to remind the Dené who they are and why they are there. The people who call this rugged and inhospitable land home are taught to respect and honor the land and their ancestors above all else. Ricky Tsetso, a good-natured Dené guide with a quick laugh and easy smile, explained it to me simply when he said, “There is no separation between us and the land. We are the land. The lakes and rivers are our blood, the mountains our bones, and the animals we share the land with are our cousins.”

I heard many of the old stories and legends sitting with Ricky late at night around a fire while the endless northern twilight lingered into the early morning hours…. The mountain we had climbed earlier that day was the home of many ancestors, and when the light hits its flank just right the faces and skulls of those ancestors can bee seen in the rocks. The eagle that had stoically watched us land our small boat at the foot of the mountain was there to make sure our intentions were pure and we meant no harm. The wild blueberries we had feasted on during our climb were a gift from the ancestors to all the creatures that inhabit the land.

Over a cold Molson while night twilight turned back into sunlight, Ricky explained that the Dené believed the creator first created the land and then the animals, and later on, when people were created, they were the weakest of all the creatures and would have to depend on everyone and everything for survival. He explained how this dependence has taught the Dené respect and humility towards the land. 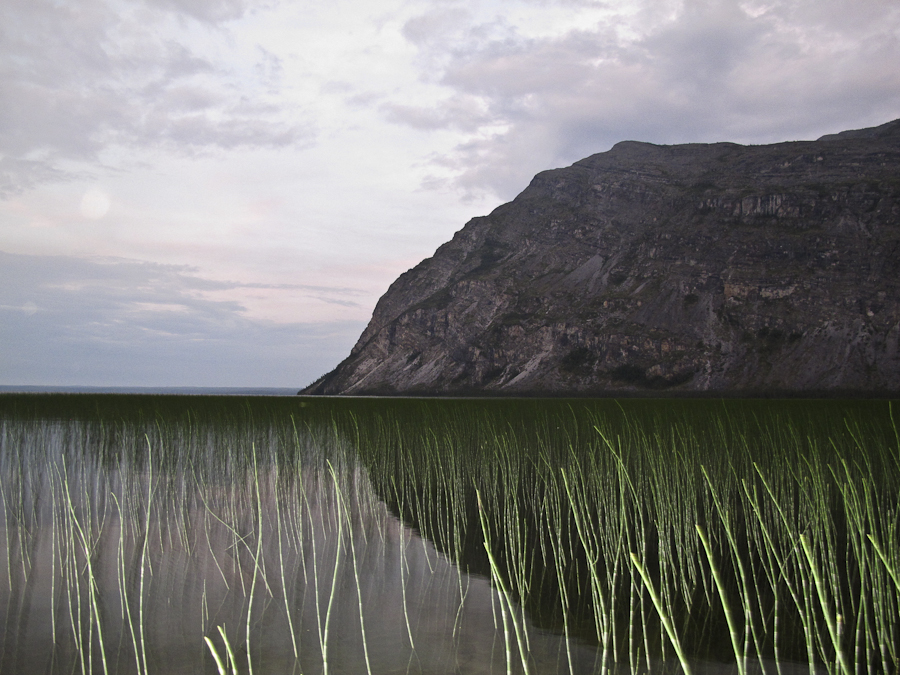 Clii Mountain from the far shore of Clii Lake. This was shot just before midnight as the muted sunset spread out to the horizon and the long twilight hours began. 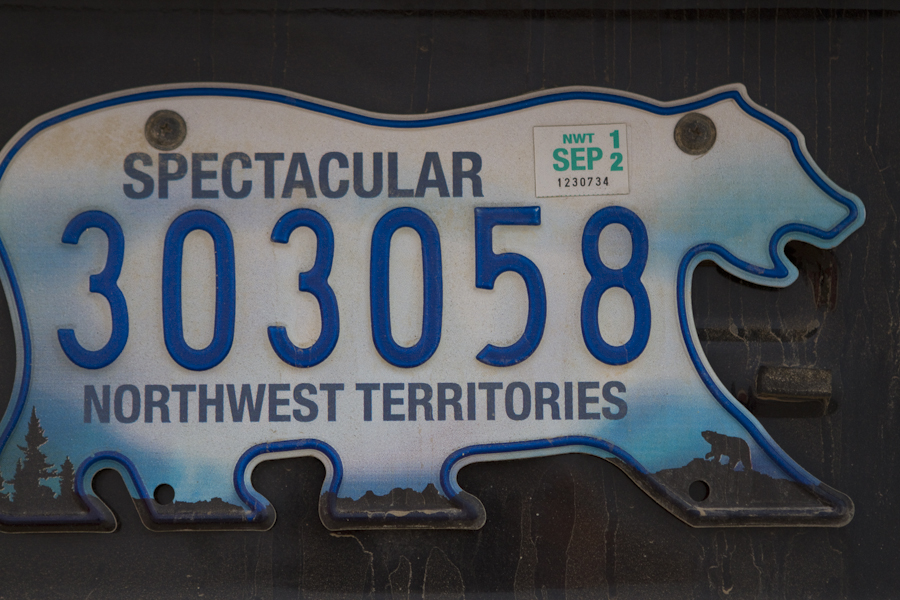 Northwest Territories license plate...probably one of the coolest I've ever seen. "Spectacular" is an often-used term to describe the landscape and environment up here. 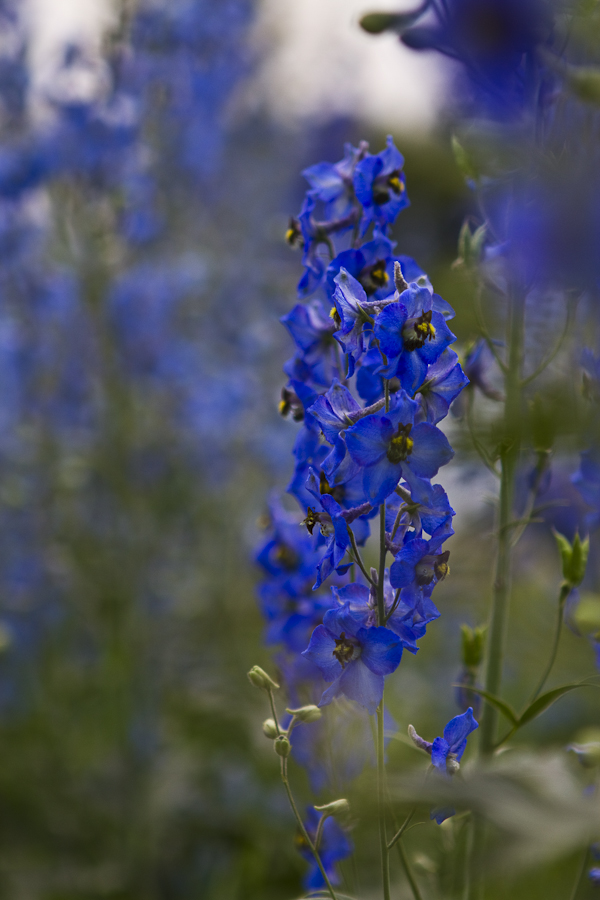 Late summer wildflowers are everywhere in July and August. I never heard the legend behind these flowers, but I'm sure there is one... 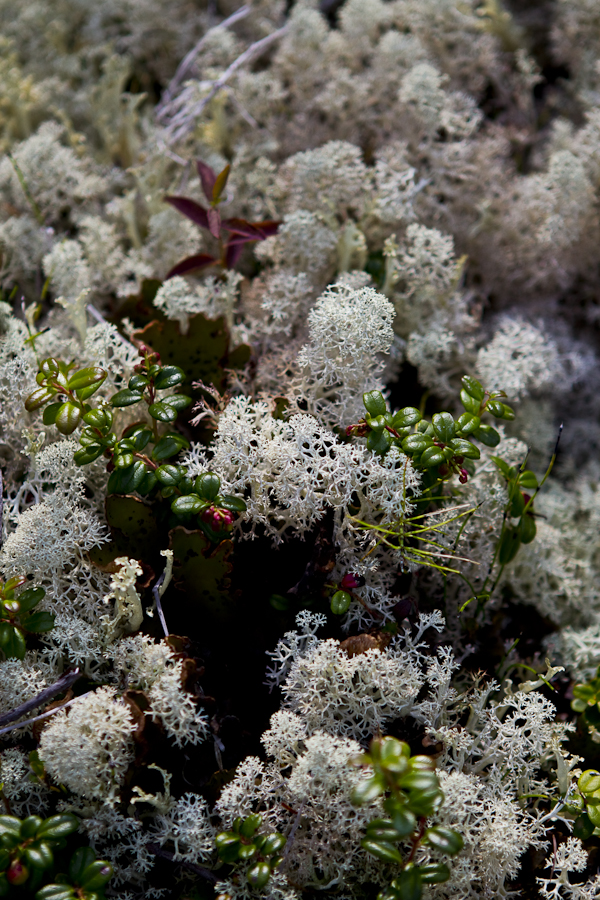 Lichen on the forest floor near Virginia (Nailicho) Falls. Lichen such as this is one of the hardiest plants on earth. Slow growing and able to survive the harshest of temperatures, it is a staple for the caribou herds during the long winters. 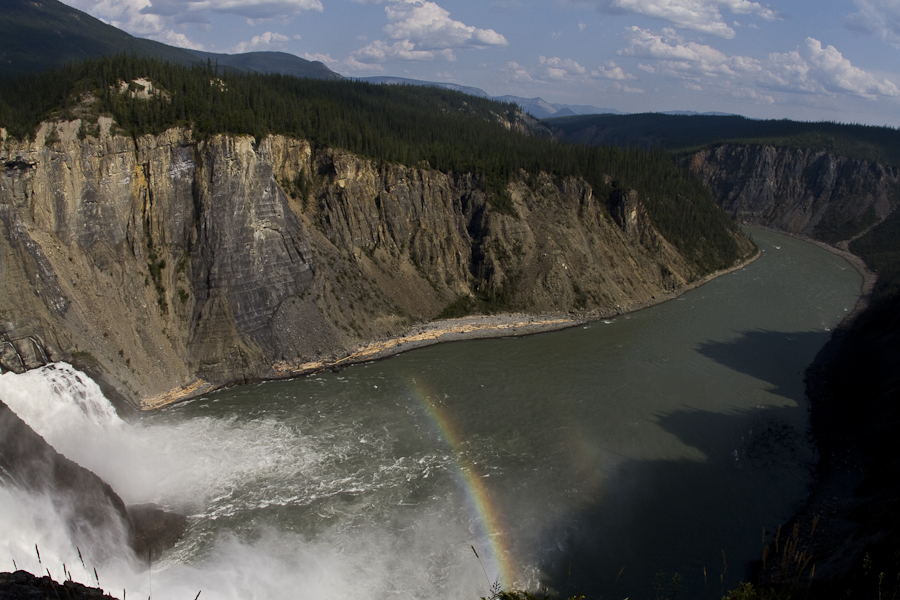 Looking down the Nahanni River from the cliff edge at Nailicho, which means "big water" in Athabaskan. 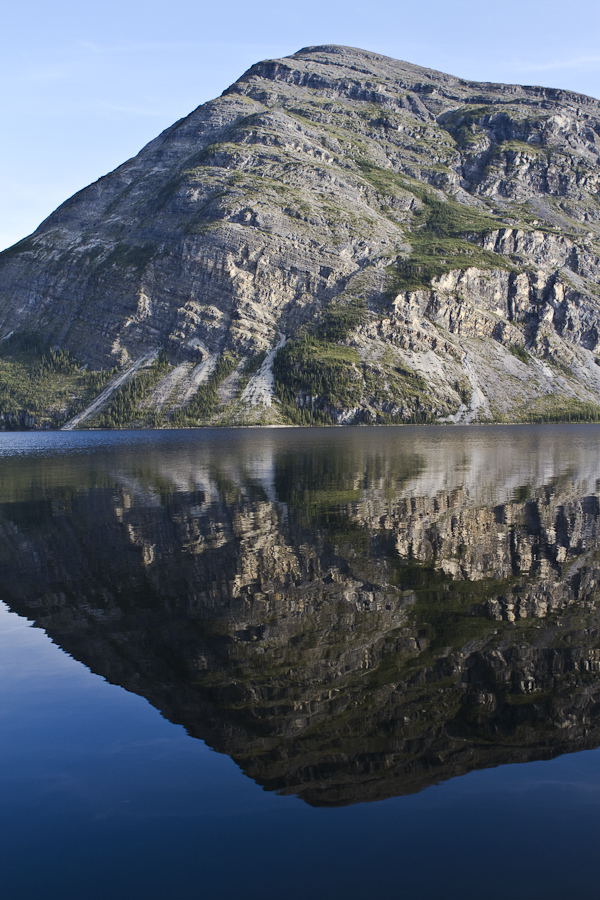 Clii Mountain, from the longtime village site on Clii Lake. The site is now occupied by a beautiful lodge built by the descendents of the tribe that has called the lake home for countless generations. If you look closely at the base of the big cliff just above the water, a large skull of the ancestors can be seen. 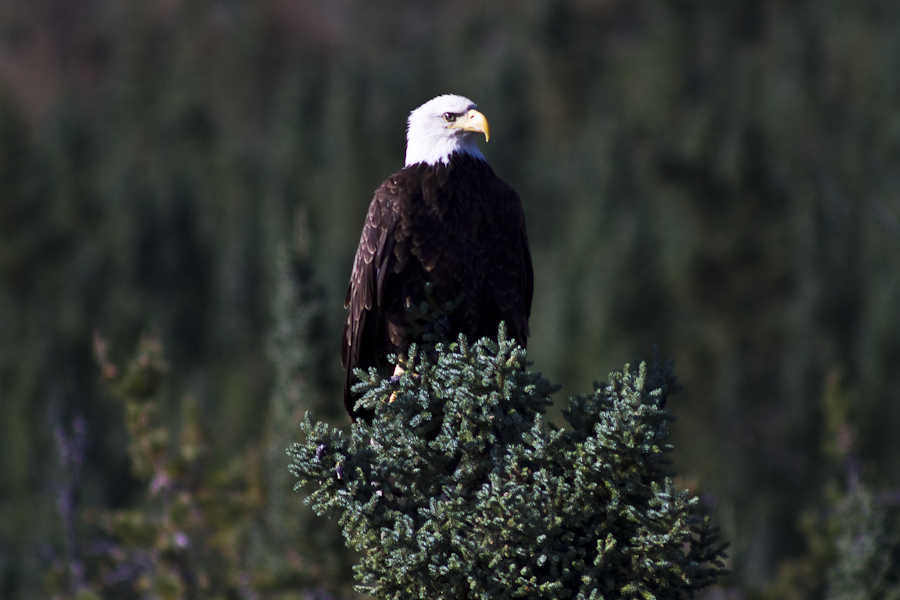 A large bald eagle, known to the Dené as det’anichok, watched from his perch as we landed our small boat at the base of Clii Mountain to begin our climb. I’ve never felt so closely watched, and the eagle soared overhead during our entire climb. 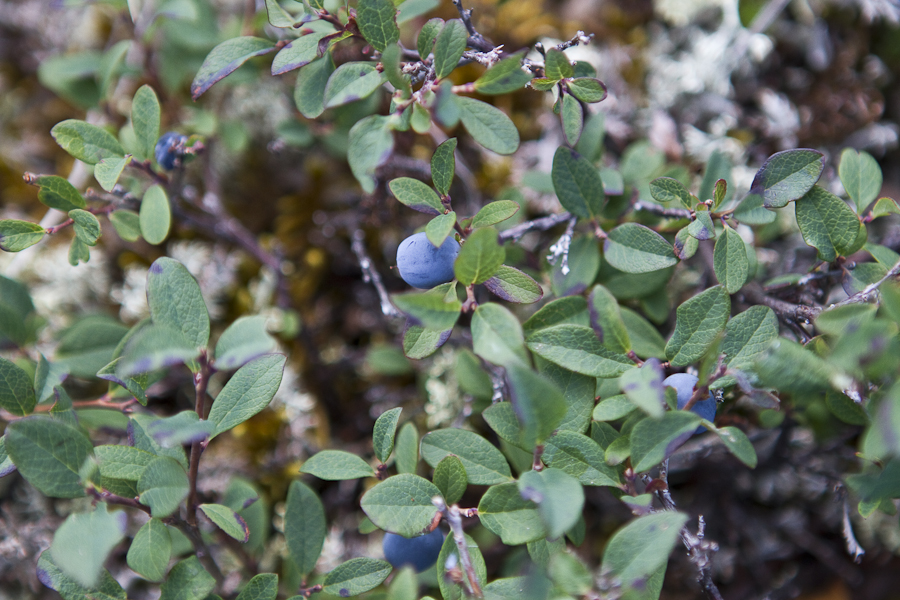 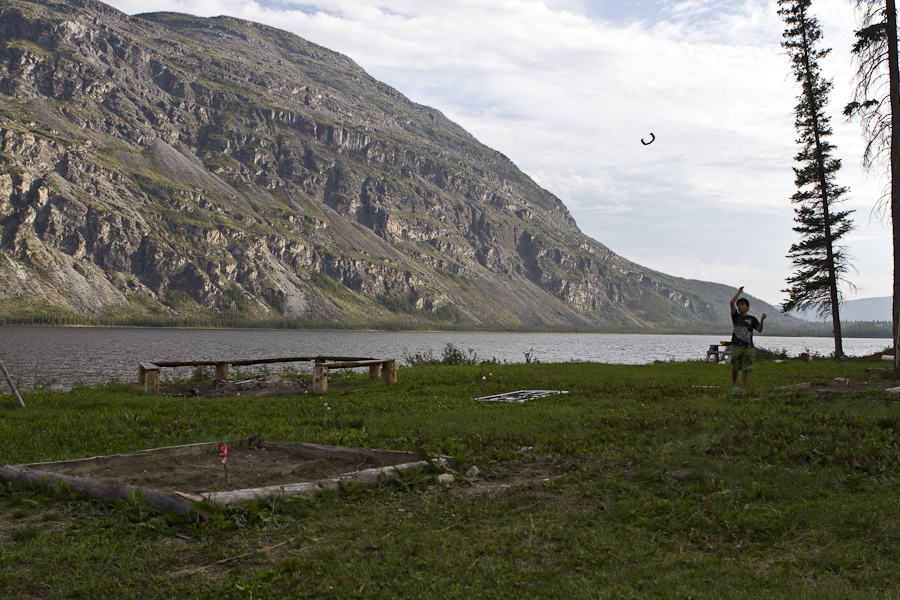 Bryce throws horseshoes at 10 o'clock as the sun is just beginning to set on Clii Mountain. 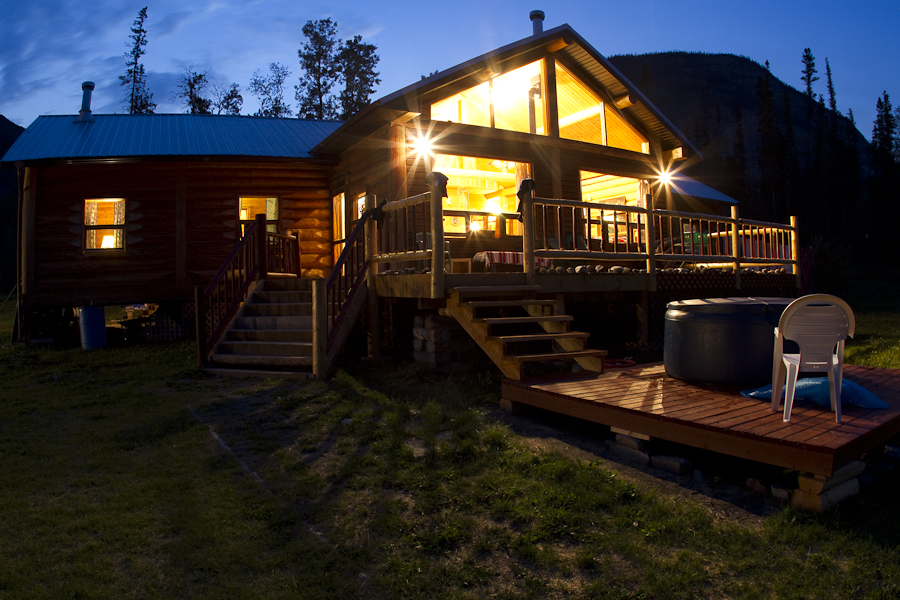 The Northern Nahanni Naturalist Lodge was built by hand from locally harvested logs by the Clii family, whose ancestors have called this exact location home for generation upon generation. It was a real treat to be able to spend time in such a beautiful and powerful place. The reverence of the land that Ricky so adamantly teaches to Bryce will stick with me for a long time. 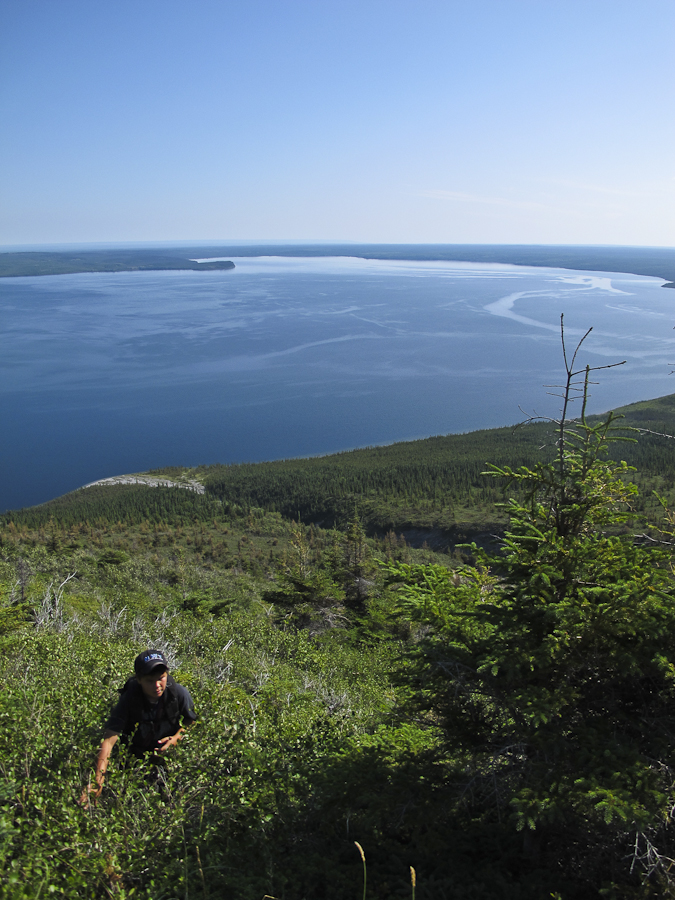 Bryce Phillips, an 11-year-old Dené, wades through the thick brush on Clii Mountain, sacred home of many ancestors. On this day, Bryce became the youngest to ever climb the mountain. 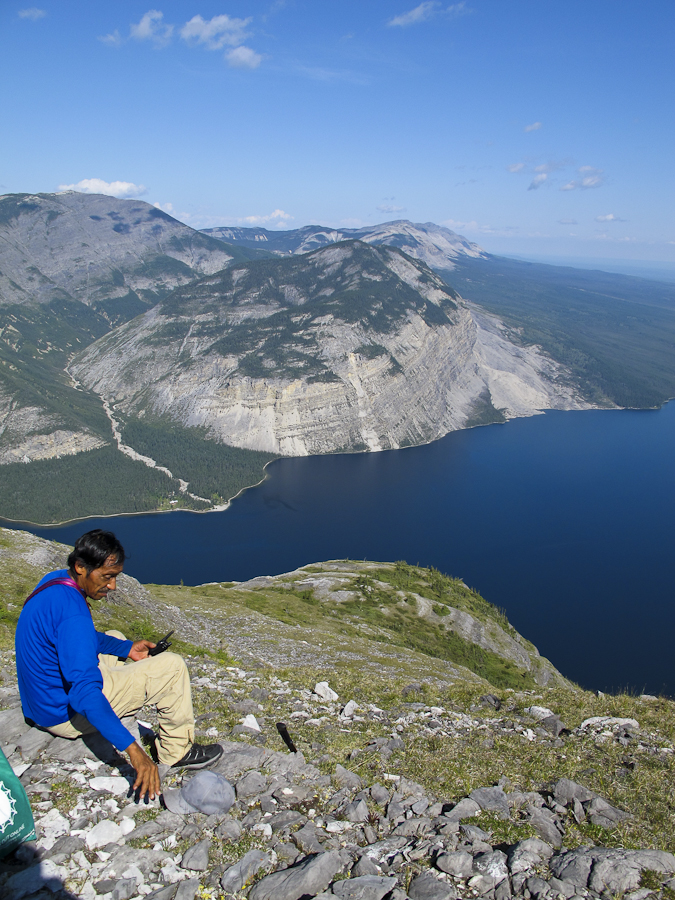 Ricky Tsetso is a Dené guide and lifelong resident of the area. His knowledge of the local territory is only surpassed by his ability to tell stories about the land and its people. 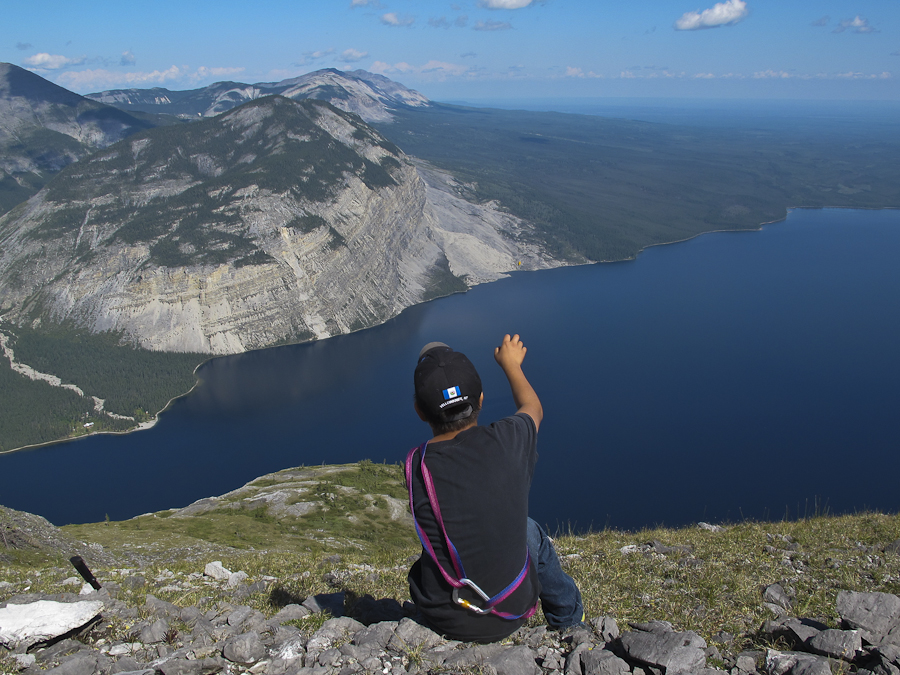 Bryce takes in the view of Denendeh from the top of Clii Mountain. He has spent countless hours in the shadow of the mountain, gazing at his ancestors' faces in the rocks, and it was amazing to see his reverence for the place.