I TELL HER THAT A GIANT BIRD LANDED ON MY CHEST. I think. Maybe I was dreaming. I think I passed out. It’s all kinda vague.

“Yes,” she says. Excited now. “It was an eagle. Normally the eagle flies high and sees everything. It means you need to look at the big picture. To see everything. You’re focusing too hard on the details.”

Her job is to speak with angels. My angels, to be specific. My job is too write a story about her and the other various healers living in Bali. This particular shaman was from LA. She called her treatment an “angel reading,” and several of my woman friends have called her amazing. I wasn’t so sure. I lay there on her couch for a solid hour and wasn’t really so sure I’d even had the eagle dream. Or anything else. I just wanted to give her something to work with. I felt bad about the whole deal.

“No,” she replied. “Sometimes they don’t show up. It’s always a bit different.”

This information cost me $75. Over the course of visiting several Western healers — including a psychic, a chiropractor, and an astrologist — I blew several hundred dollars and learned very little. My back was cracked and my stars aligned, but overall I felt pretty much the same. Which, to be honest, was fine. I felt fine.

By contrast, the local Balinese healers, called Balian, operated purely on a donation basis. After a session, you walk into their household temple and leave what you feel is appropriate in the form of an offering. The Balinese visit such healers just as Westerns might see their family practitioner, assuming your doctor can also locate missing objects and speak with dead relatives. 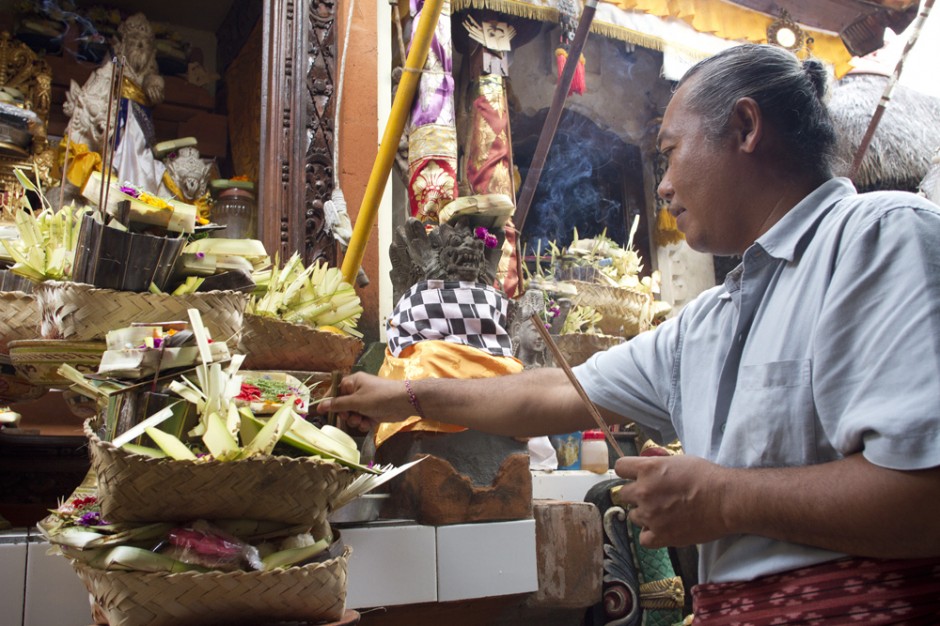 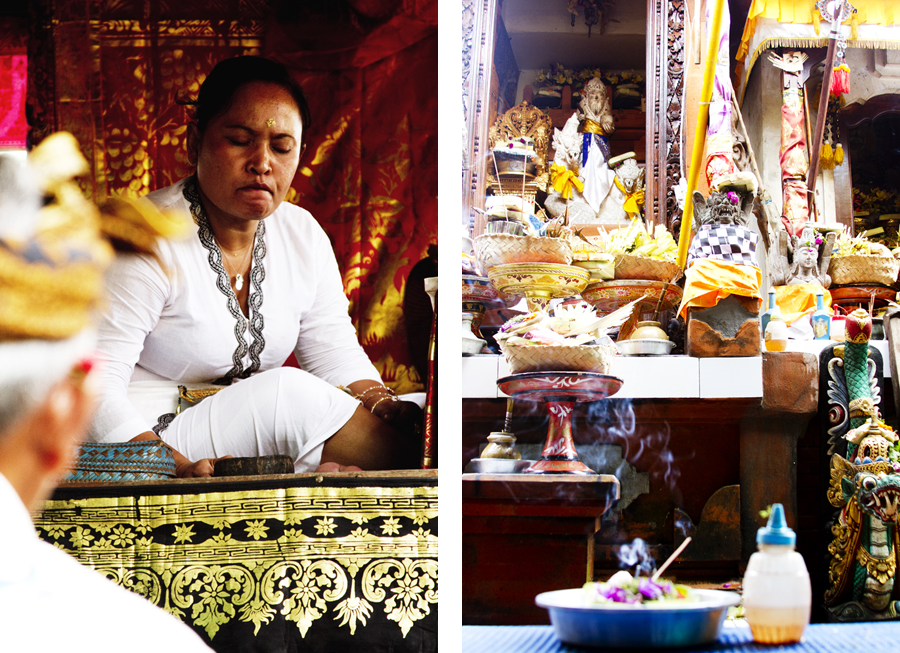 I had some interesting experiences for this gig — and most of them proved extremely painful. Once, after a woman channeling the spirit of a thousand-year-old Indonesian queen informed me that I had a demon inside me (acquired while surfing taboo waters), I was sent to her husband for removal. He was waiting nearby. As if he knew I was coming.

He started at my neck, then worked the negative “demon” energy down my arms towards my hands. I could feel it moving. Building in my arms and wrists. By the time his intense, wringing “massage” reached my hands I had lightning bolts shooting out of my fingertips. I screamed. The Balian giggled. He saw this every day.

A Westerner sitting nearby told me she’d seen people pass out and throw up during these treatments. One man spoke in tongues and another tried to punch the kindly Balian. I could relate to all these reactions. The pain was making me crazy…and also I wasn’t even sure if it was real or imagined. 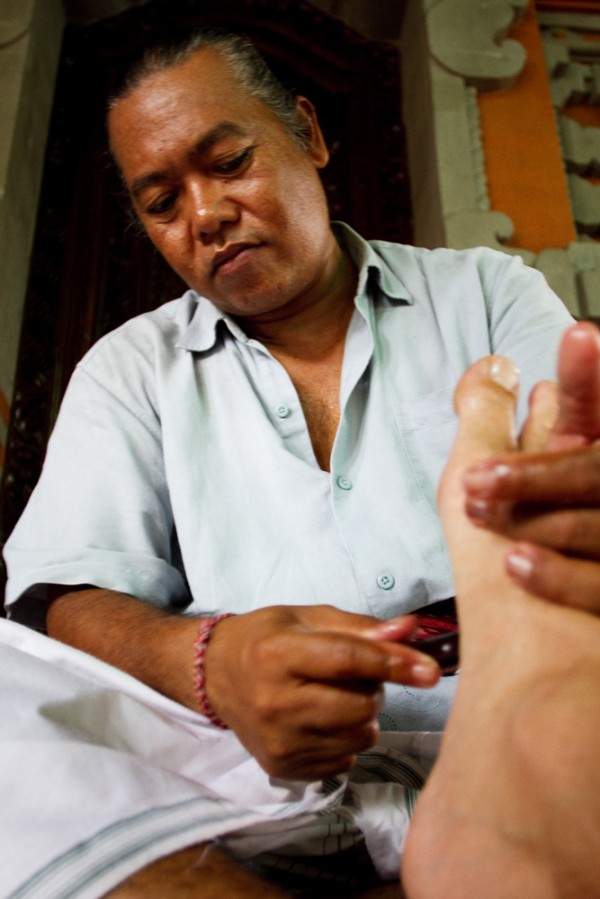 He was doing my legs now, working towards my toes, and there were tears and agonized laughter pouring from various parts of my body. When he reached my ankles, the Balian produced a small, oiled stick. He pressed it into my toe and I wailed. Lightning shot across the room and killed a small bird. Goddfuckindamnthatshithurt!!! He pulled the stick away and the pain was gone. He pushed it back and more holyshit lightning shot out. Stick off, pain gone. Stick on, lightning blast. He did this several times to demonstrate his effectiveness. Smiling, like, “see what I can do.”

I loved him and I hated him. He had a gentle smile, but there was no pity in his work. No mercy. He was removing a demon from my body. One I didn’t even know I had in the first place.

In all these Balian and expat healer visits, the main problem was that I had no problem. I felt fine. I just wanted to learn more about magical healers on this magical island. The psychic, the astrologist, a hot stone chakra alignment reflexologist, and the guy who could see inside my body…they were all intriguing characters in my little story. So I sat outside their temples beside people in wheelchairs, people swaddled in blankets in the thousand-degree sun, people nursing their open sores and limping towards their salvation, and when my own turn arrived, when the mystical healers of Bali asked, “And what is your problem today? What can I help you with?”

I had nothing to say.

The thousand-year-old witch found a demon in me. The man who could see inside me said I should eat less sugar and then he increased my sperm count (free of charge). And maybe, just maybe, a giant eagle landed on my chest. I’m not sure, really. It’s all a bit vague. 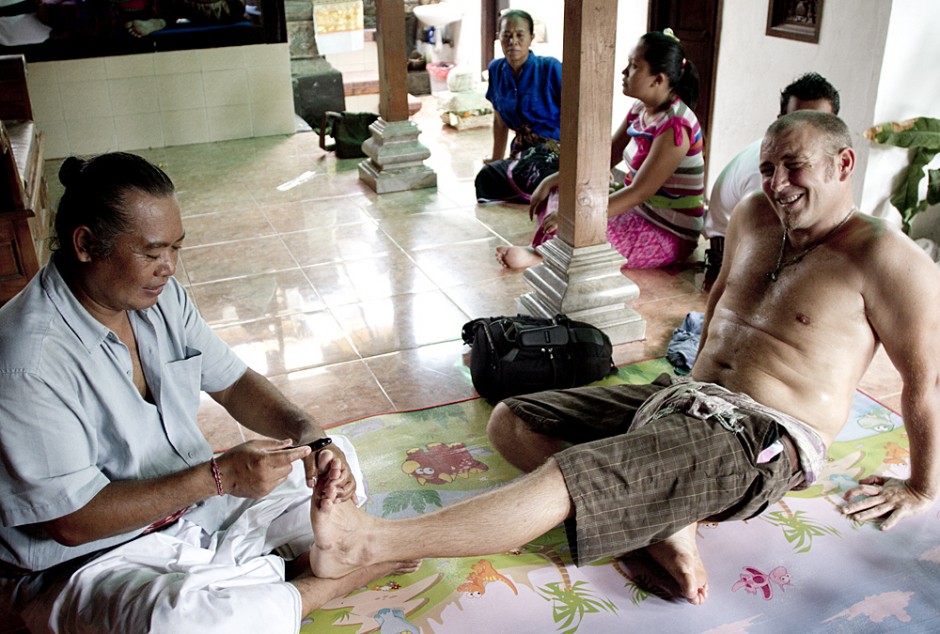 Tagged
Lifestyle Indonesia Ambassadors
What did you think of this story?
Meh
Good
Awesome
✖
travelstoke
Download the mobile app
stoked by