THE HOSPITAL WAS smaller than I expected. It was clean and equipped with two ultrasound machines and a decent delivery room. There was a lab, a pharmacy, and a small grocery store in the well-guarded compound. People milled about the compound, mostly family members, guards, and workers. The women, in hijab or black chadors, stared at me as I explored. They didn’t allow me to take their picture. Behind the hospital in the laundry, women competed to have their images snapped.

I was spending two weeks in Somaliland as a volunteer doula. Along with Edna, the woman who founded the hospital I was to work in, were: Brigitte, a French physician; Karena, a nurse from New York; BreAnn, a nurse from Massachusetts; Dirk, a German OB-GYN; and Freida, an Austrian nurse-midwife.

Somaliland is dry and dusty in the long absence of rain, and mostly flat with a pleasant climate at over 4,000 ft. above sea level.

The history and politics of Somaliland are complex. One of several colonized regions of Somalia that sought independence in the 1960s, Somaliland declared itself free from British rule several decades ago and has been fighting for recognition as an independent nation since. To date, no country recognizes it as distinct from Somalia.

Somaliland is dry and dusty in the long absence of rain, and mostly flat with a pleasant climate at over 4,000 ft. above sea level. It is one of the poorest countries in the world. Canvas or wooden business stalls, goats in the deeply pocked roads, and inadequate houses — often shacks made of corrugated metal and rags — provide a visual for deep poverty. Life expectancy is under 50, women are usually married between ages 15 and 25 (and have between 5 and 12 pregnancies), and FGM is universally practiced.

On my first night at the hospital I had my first doula experience. Mom was about 18; it was her first child. She was laboring so well I thought she must be in the early stages, but she was on the delivery table and the midwife was doing things that suggested the baby was coming. Mom moaned and clung to my hand; I stroked her arm and whispered, “you are strong, you can do this.”

A student nurse translated for me. The mother nodded in acknowledgment. I supported her head while she pushed; she grasped my arm. Suddenly her son was born, his wet little head emerging, his body sliding quickly out. “Good job! Look at your little baby!” I told Mom. “Thank you!” she said in English while squeezing my hand.

The next morning was my second birth. This was Mom’s third child and she chose to stand through most of her labor. Hibo was the midwife and the most calming, competent soul I’d ever met. I encouraged Mom, massaging her hips and back, stroking her arm, and talking to her in whispers. I sensed that she was comforted by my voice and my touch. She leaned on my shoulders, laying her head against me as if she were a child. I reassured her.

She climbed onto the delivery table. Hibo gently examined her, told her when to push and when to stop. She was holding onto me when Grandmother appeared. Was I usurping her position? She told Hibo, “It is beautiful the way she is helping my daughter.” A bigger reward I could not imagine. Finally, a big, healthy boy was born. Mom thanked me profusely. I said, “I honor what you have done.” She kissed my hand. I kissed hers in return.

The C-section was just beginning when I entered the OR in my scrubs and mask. Mom was getting an epidural. When she became numb, Karena swabbed her belly with antiseptic. She was draped. Dirk took a scalpel and made the first cut. Working quickly, he opened the uterus and pulled out a baby girl whose head appeared normal despite hydrocephalus. She had a hair lip and cleft palate; she was whisked off to be resuscitated. It all happened in 30 minutes. By morning the baby was dead.

I shadowed Dirk on rounds in Maternity, then in the Outpatient Department where he was doing pre-natal checkups. He liked to instruct me as I watched the ultrasound screen. I was invited to palpate mothers’ tummies, listening for the fetal heartbeat through a primitive wooden instrument.

I visited Hodu, a pretty six-month-old girl who had a recurrent infection on her head and face that caused loss of pigmentation and scabbing. No one knew why she had this condition. 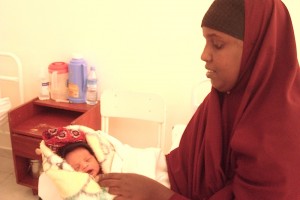 I helped a mom who delivered by Caesarian during the night because of severe hypertension. Her baby boy, dubbed Tiger, weighed slightly over two pounds at 28 weeks. His Mom pumped and fed him through a syringe. I helped her put flesh to flesh, positioning the baby between her breasts, a technique known as Kangaroo Care which has saved premature babies in developing countries. Mom squeezed a few drops of milk into Tiger’s tiny mouth.

Tiger’s mom was lucky; she had permission for a C-section, but I had begun to see a dark side of this country and culture, where voiceless, dis-empowered women must have their husbands’ OK for a surgery or, really, anything. I watched as husbands came and went, ignoring their laboring wives. Imperious and authoritarian, swaggering in and out.

Dirk had seen them deny a wife her life, even as she cried to be rescued. “Inshallah!” they said. It is God’s will. He had seen babies die unnecessarily. “Inshallah.” A woman in Somaliland often has less value than a camel. Her function is to marry, bear many children, and obey her husband. Her body is not her own. She has no genitals; they have been amputated by the time she is 10.

Watching women give birth, there was a testament to their strength and courage in the face of such a life. “She’s doing all the work and I’m doing all the sweating!” I told Hibo as she delivered a woman’s ninth child. She made no sound; her baby popped out. It was whisked away to be cleaned up and Mom seemed little interested; she lay patiently waiting for the placenta to be delivered. Then she got off the delivery table as if nothing out of the ordinary had happened.

I taught first-year nursing students about emotional support during labor and delivery. One day I checked to see what was happening in Maternity and promised a young new mom that I would return after my class to help her. She squeezed my hand. When I came back the nurse said, “The woman, she is asking for you. She says she want that lady!” The mom I promised to help had delivered her baby. I went to her, apologized, and exclaimed over her new daughter. “Next time, Inshallah!” “Mashalla!” her mother said, smiling.

At the start of class I made small talk with the students before we got down to business. I wrote “Doula” on the board, telling them it is Greek for “woman helper.” I explained what we do and why, and talked about the importance of emotional support for all patients. I told them that in America we don’t always live close to our families so we need others to help us when we are in pain or afraid.

“Allah gave you a voice! Women’s voices are beautiful! You must not be afraid to use your voice!”

I demonstrated what doulas said and did to make mothers less afraid and more comfortable during labor. They seemed rapt when I spoke but when I asked questions or solicited their queries they fell silent. “Allah gave you a voice! Women’s voices are beautiful! You must not be afraid to use your voice!” I said, but it fell on deaf ears; they had been socialized into silence.

I asked again, “What have you learned today?” Silence. Twitters. I broke the class into groups so they could practice supporting laboring mothers. They found role play hilarious so I tried a single demonstration but this, too, seemed literally too funny for words. I asked once more, “What did you learn today?” One student said, “I learned that ‘doula’ means woman helper!”

I was so excited I pretended to ululate; the others laughed and did the real thing. A few more students said something audible and I waved my hands in a Hallelujah gesture. I concluded with a pep talk about the difference good nurses make and the need to honor as well as support the hard and amazing work women do having babies.

On my last day I visited Hodu and Tiger and kissed Hibo goodbye. We had dinner at the hospital with Edna, who liked to be ceremonial when volunteers and staff left. Dinner was a special treat: takeout pizza and a cake. Edna made a speech about what we had each contributed and thanked us for being part of her Hargeisa family. Brigitte and I were presented with t-shirts sporting a picture of the hospital.

Edna accompanied us to the airport. We promised to keep in touch.

Tagged
Travel Jobs Somalia
What did you think of this story?
Meh
Good
Awesome

Living in Mogadishu used to be “hell.” Here’s what it’s like now.

What it’s like to visit Somaliland as a tourist

Risking everything for music and peace in Somalia

Mapping the food crisis and famine in East Africa