The next morning I meet a friendly and smiling hotel security guard, named Emmanuel. He seems instantly glad to see me, as though I am an old friend. He asks me what I’m doing in Kigali. He asks me where I’m from. 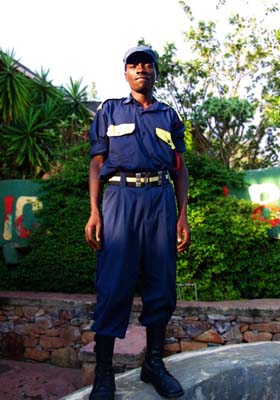 Canada, I tell him.

“Yes, there’s no war, Vancouver is very beautiful, right on the ocean with tall mountains nearby.”

I tell him about my photo project and ask if he’d like to participate.  He smiles. “Yes, it’s okay.”  Emmanuel, 26, tells me that he and his sisters, like an entire generation of Rwandans, are orphans. His sisters are older than him so, he says, they suffer much more from the trauma of their parents having been killed in front of them. At times it is debilitating for them, he tells me. Particularly during memorial week.

I find Emmanuel to be surprisingly warm, still smiling as he recounts his story to me.  “How do you deal with it now?” I inquire. His happiness seems to me incongruent with the tragedy.

“To get peaceful in my heart I had to forgive those people who did those things to my family,” he says.  He tells me he is a part-time student, that he has Hutu classmates, some of whom say they are sorry for what happened. Others say nothing at all. He even has a Hutu friend who participated in the genocide.

In the weeks and months following the end of the killing spree in 1994, Rwanda’s new leader, Paul Kagame, continually urged his countrymen to rebuild, move forward and, most importantly, to forgive. 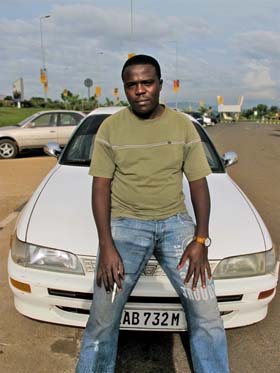 To aid in the process and promote healing, a traditional community justice system known as Gacaca was re-established in 2001, in which imprisoned killers seeking forgiveness could ask for it officially, and survivors of the genocide could grant it.

“Do you have parents in Vancouver?” Emmanuel asks as I snap a few last shots of him. The question perplexes me for an instant as it isn’t one commonly asked in North America. I lower my camera. “Yes. Not too far from Vancouver, in a mountain valley called the Kootenays.” His eyes get teary. He puts his hands over his heart and smiles widely. “That makes me feel good,” he says.

Given the context in which people were talking about forgiveness in Rwanda, I had to question its meaning. Certainly Emmanuel’s and Fefe’s sense of peace seemed genuine to me. But how does one forgive a person, a mob, an entire tribe for murdering one’s friends and family? Rwandans are devoutly religious, but can faith alone do it?

“They simply must,” one Hutu man tells me. His name is Gregoire. He declines to be photographed but shares his story over a coffee at one of Kigali’s many packed cyber cafes. “Yes, we are religious, but more importantly we see what holding hatred and seeking revenge does. My grandparents especially and sometimes my parents would talk bad about Tutsis. You hold on to this for years and it comes up in very bad ways eventually. The Tutsis know this. So, many have made a choice. Hold on to revenge, or let it go.” 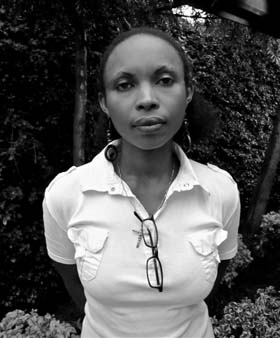 In the following days I talk to as many people as I can. Some are open to sharing stories about the genocide and having their pictures taken. Some are not.

At a church memorial site in Ntarama, 30km south of Kigali, I am introduced to a woman who is one of the five survivors among the 10,000 people who were murdered there. Around us is evidence of what happened: ragged, blood-stained clothes hang from rafters; flip-flops, eyeglasses, and bracelets are piled on a nearby rack; machetes, clubs, and screwdrivers are strewn over the floor; and shelves of skulls and arm and leg bones line the back wall.

The stench of decomposing flesh, even after 17 years, hangs in the air. It comes as no surprise to me when the woman refuses to have her picture taken and story told on my website. Fair enough.

Other people I dare not even approach with a photo request. On Genocide Memorial Day I venture into central Kigali in search of an open restaurant. The taxi driver can’t understand why I want to be dropped off in the middle of town, and I immediately see why. Overnight, the city has transformed from a bustling conurbation into a ghost town. 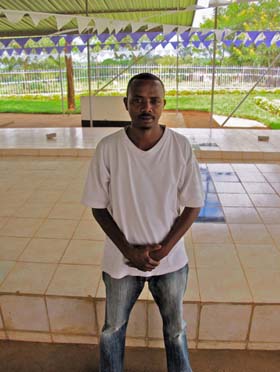 As I walk its empty streets I imagine myself there during the genocide. Nothing stirs. The silence is oppressive. I question whether I should even be there.  My search for food, which is proving difficult, brings me to a lengthy stretch of Boulevard de la Revolution, where I spot a man walking towards me a few hundred yards away. Someone I can ask for directions, I think. But as he approaches I notice something off about him.

His gait is one part limp, one part aggressive strut, and his face is puffy with pock-marked skin and bloodshot eyes. He stares straight ahead as he passes me, fixated on something in the distance. I will think about this man a few days later when I’m told a story by my friend Blaise, an American-Rwandan working in Kigali, about a Hutu man he knows.

On a certain Monday every May, I am told, the Hutu man withdraws from family and friends to return to the roadblock he manned during the genocide. There he stands at the side of the road, waiting all day for his long-gone commander to coax him to “do the work”, code for killing Tutsis.

I look back at the man who has just passed me and I wonder if he is trapped in anguish, observing a private anniversary, struggling for forgiveness.

Prev Page Next Page
Tagged
Travel Rwanda
What did you think of this story?
Meh
Good
Awesome

Airbnb’s most wish-listed properties in all 50 states

Heaven Rwanda: A restaurant with a (social) mission

It’s time to visit Kigali, Rwanda, one of Africa’s most influential cities

Unpacking the human narrative of Rwanda