The Power Of Intent

Smiling at a stranger on the street because you’re about to steal his wallet is unwholesome. Likewise is donating a million dollars to charity so your corporation scores public relations points.

The action is good but the intent is tainted.

Intent is crucial when dealing with karma, which is why animals are not bound by the same karmic rules. A rampaging bear does not have “intent” to kill anyone – it’s simply acting on instinct.

Humans appear to be the only capable beings (at least on this planet) that are able to alter their actions based on self-reflection and contemplation.

This doesn’t mean that humans are better or worse than animals, yet it’s generally irrefutable that we possess mental capacities beyond any other species.

For example, sleeping, walking, and breathing have no moral consequences in themselves. Similarly, “unintentional” action is neutral karma.

I’m reminded of a story that my wife told me a few years ago about a visit to Mexico. She explained how she had left the hotel to wander the humid streets with her family, wearing a modest pair of shorts; apparently in Mexican culture, only whores wear shorts.

When this was brought to her attention by her Mexican step-sister, she immediately apologised and felt terrible ever since. Clearly, she had no intention of traversing the cultural custom and drawing rude solicitations from a few local men.

Being unconscious of the custom’s existence, her actions could be considered karmically neutral, as she lacked the intention to offend. 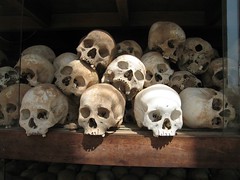 Before you start accusing all the people throughout history who have caused endless suffering with their good intentions, consider that they failed to recognise the suffering their actions would cause.

Or if they were conscious of the horrendous suffering, they turned a blind eye, because they deluded themselves into believing it was for the greater good.

These are examples of people failing to recognise their negative karmic actions and ignoring the possibility of foreseeable consequences.

It’s like a boy getting his girlfriend pregnant because he didn’t wear a condom, who then protests, “But I didn’t intend to get her pregnant!” Tough luck. That’s consequence for you.

If that didn’t go right over your head, I have one last point to make regarding karma: karma should not be confused with fate. I tried explaining this to my friend while waiting for the bus, and it proved more difficult than I thought.

Fate is the belief that a person’s life is predetermined by some external power, and that we have no control over our destiny. 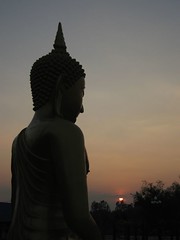 Karma, on the other hand, can be changed. Because we are conscious beings, we can be aware of our karma and thus strive to change the course of events.

In other words, as we go through our lives sending and receiving waves of causality, we can choose how to interpret and act on these waves.

“All that we are is a result of what we have thought, it is founded on our thoughts and made up of our thoughts,” said the Buddha when questioned about ethics.

He believed we are entirely dependent on what we think. Not in the sense that what we happen to think makes our relative realities true, but that our actions are governed by how we perceive ourselves and the world around us.

The aim is not to make ourselves suffer, or inflict suffering on others, but to “see” reality as it really is, without our personal biases clouding our vision.

When we’re able to see reality, we realise how our actions affect others and are more likely to proceed with wisdom and compassion.

Now go out there and do some good.

Ian MacKenzie is editor of Brave New Traveler, and co-founder of the blogging community TravelBlogger. Aside from writing, he spends his time exploring the fundamental nature of existence and wishing he did more backpacking.
Prev Page
What did you think of this story?
Meh
Good
Awesome