In the year 2051, the Chinese have a space elevator. Lamb chops, Irish coffee, and sexual pleasure are all consumed via hologram. And, thanks to the research and innovations of neuroscientists like Dr. Phil Kennedy, canned brains housed in life support machines are being shot into outer space in hopes of reconstituting a human population on new planets.

This is the future as Kennedy sees it, anyway. This brain-in-a-jar space travel is described in Kennedy’s self-published “predictive fiction” ebook, “2051.” But Kennedy isn’t simply fascinated with sci-fi; he’s a respected neuroscience researcher who has worked in medicine for more than two decades. In the 80s and 90s, Kennedy received attention from the science community for developing technology that allowed patients unable to speak or move direct a computer cursor with their minds. He implanted electrodes in their brains to help them guide the pointer over letters and words by thought so they could communicate. It’s his work on technology like this that drives Kennedy to believe the brain is the most fundamental part of humanity. This explains why the idea of stripping down to our core essence — the brain — and leaving the clumsy life support system of our bodies behind is a tantalizing prospect for the neuroscientist.

It also explains why, in 2014, Kennedy had the top of his skull sawed off, and tiny electrodes implanted inside his brain in order to understand it better. But first, he had to travel to South America.
In the United States, the FDA withdrew its initial approval of the use of electrodes in human brains unless Kennedy could provide more safety data, so Kennedy traveled to Belize. There, he paid the country’s only neurosurgeon to implant the neurotrophic electrodes five or six millimeters deep inside his motor cortex so that he could record and decode the neural signals attached to speech (i.e., the blips that our brains fire out when shaping words). His aim was to develop a speech prosthesis (and perhaps, one day, have a hand in technology that allows humanity to leave our bodies behind). He awoke from surgery with a temporary inability to speak after a spike in blood pressure had caused his brain to dangerously swell during surgery, nearly threatening his life.

“Some have won the Nobel Prize from the results of self-experimentation, others have literally died from it” – Paul Root Wolpe

Why did he do it? After 30 years of laborious tinkering with the brains of 42 rats, eight monkeys, and eventually five human patients, he ran out of funding and lost approval from the FDA, who decided the surgery was too risky. It was the only way to continue on his path toward human electrode implantation. Kennedy’s $30,000 South American surgery and high-risk self-experimentation has garnered a mixture of awe, skepticism, and condemnation from colleagues in the field.

Kennedy, a clean-cut 69-year-old father, grandfather, and chess aficionado, cannot lift his left eyebrow, and has a slight dent on the side of his face near his left temple where his cheekbone was compressed. Otherwise, few signs of the procedure remain — aside from the tiny glass and gold electrodes that will always be buried in Kennedy’s brain, of course. Kennedy spends most evenings inside his Neural Signals headquarters and laboratory in a suburban Atlanta office park, sifting through all of the data he has collected. He’s been doing this every day since January of 2015. “And I’m still not done,” he says. “It’s going to take a long time to get done.”

After his surgery, Kennedy spent hours speaking phonemes (or small units of speech that can be used to make one word different from another word) and short words, then thinking the same phonemes and short words, and recording the neural data throughout. Now, each day after he’s finished seeing patients at his neurological clinic next door, he walks over to his adjacent office and, alongside a programmer, trudges through hours of raw data to make sense of it all.

It’s work of the loneliest sort: Tucked away in a suburban office park surrounded by oral surgeons and chiropractors, one man dutifully analyzing the data of one subject, who also happens to be himself.

The office is wallpapered in charts and graphs, an X-ray of his skull, case studies, and newspaper articles about his former patients. Raw data, it seems, is strewn on every surface. Looming above the conference table is a large whiteboard scrawled with purple handwriting, which the soft-spoken Kennedy calls doctor’s chicken scratches. The board outlines research goals that Kennedy wanted to accomplish in the time the electrodes were implanted: starting with phonemes, moving up to short words and phrases, then experimenting with variables like sleep and medication. Only three of the seven items have check marks beside them — Kennedy had to have his transmitter removed only a few months after his initial surgery when his incision refused to fully heal.

It’s work of the loneliest sort: Tucked away in a suburban office park surrounded by oral surgeons and chiropractors, one man dutifully analyzing the data of one subject, who also happens to be himself.

Lonely, too, is the scientist who operates on the margins. Last fall, Kennedy presented some of his findings at a neurological conference. When I ask him what the reception was, he says, “Most people were very enthusiastic, some people were very skeptical, and a few were in between.” I press him on the skeptics. How does he respond to those who take issue with his methodology? “I said, ‘Well, I’ve got data, that’s what’s important — never mind too much how I got it.’ I can do what I want in my own brain. I have my own set of ethics.” 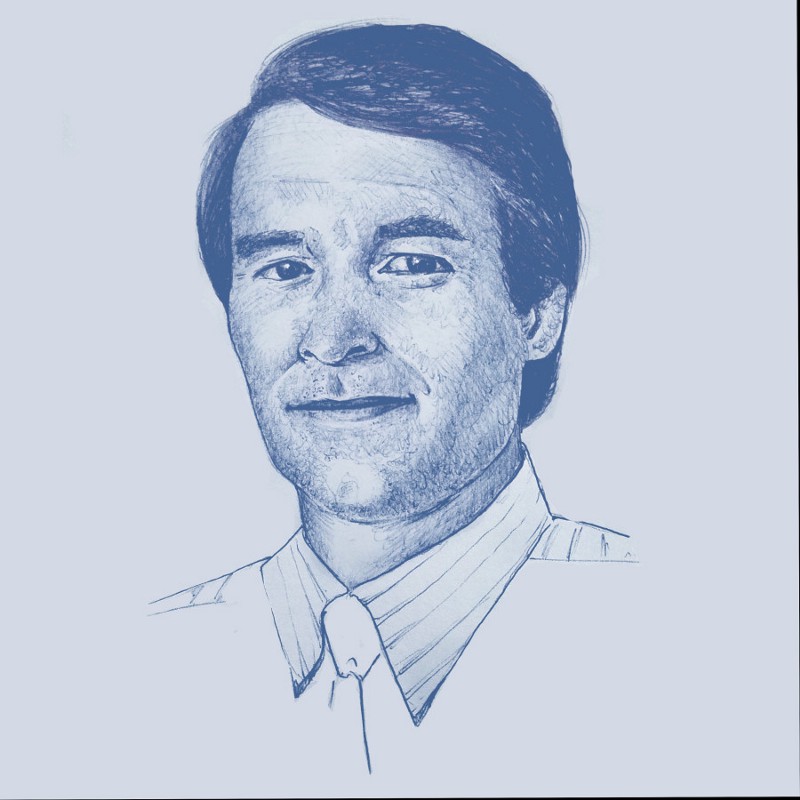 Some ethicists take issue with this rogue approach. Judy Illes, a professor of neurology and a Canada Research Chair in Neuroethics at the University of British Columbia, described this kind of self-experimentation as “irresponsible.” Laura Specker Sullivan, Postdoctoral Neuroethics Fellow at University of Washington’s Center for Sensorimotor Neural Engineering, agrees that Kennedy’s methodology could be questionable, even rash. But, she notes, it’s important to consider Kennedy’s contributions to the science of brain-computer interfacing. “Many people in the field of brain-computer interfaces actually see him as a father of the field, so I think that’s important — this isn’t just someone coming out of left field, it’s someone who has had a significant role,” Sullivan says. “What strikes me about his case is that his decision shows impatience.”

I ask Kennedy to tell me the most significant barrier standing between him and his dream of developing this technology to its fullest potential. Patients? Government support? Peer support? “Money,” he says. “Just money.”

And for Kennedy, who is confident that this technology will be effective, finding the right subject would prove difficult. “It’s very hard to get informed consent from the types of patients who might use these devices, and it’s really not ethical in terms of risk to do this type of research with healthy subjects,” Sullivan says. “So I can almost see how he might feel forced, if he wants to get this technology to advance as quickly as he would like — there aren’t a lot of options open to him.” But, she adds, there is a reason for structured clinical trials outside of protecting human subjects: to ensure that the resulting data is actually reliable. As for whether that will be the case with Kennedy’s data, no one can be sure.

Paul Root Wolpe, the director of Emory University’s Center for Ethics, acknowledges that there is a long history of self-experimentation in medicine and science. “Some have won the Nobel Prize from the results of self-experimentation, others have literally died from it,” he says. Wolpe describes the ethical quandary inherent in this kind of research as “an interesting tension.” On the one hand, he says, some believe that researchers should not do anything to a human subject that they would not be willing to undergo themselves, therefore making the case for including themselves in the experiment. “On the other hand, some feel that it actually may compromise the objectivity or control of the investigator over the research,” Wolpe says.

Unsurprisingly, Kennedy is unfazed by these kinds of assessments. “Why on earth should [self-experimentation] lead to unreliable data?” he asks. “Where is the evidence supporting that contention? On the contrary, it will allow studies to proceed that would otherwise not proceed, and the referee system of publication will not allow publication of poorly executed data.”

Notably, becoming immune to criticism from others is a key tenet of his company, Neural Signals. On the company’s website, the Culture and Values reads: “What others say and do is a projection of their own reality, their own dream” and “When you are immune to the opinions and actions of others you won’t be the victim of needless suffering.”

It will take more than peer disapproval and the FDA to stop Kennedy. With no research subjects, no funding, no government green light, and no one there (besides his programmer) to help him, the road ahead seems full of obstacles. I ask Kennedy to tell me the most significant barrier standing between him and his dream of developing this technology to its fullest potential. Patients? Government support? Peer support? “Money,” he says. “Just money.”

With proper funding he says he can rejigger the brain electrodes to be smaller, which would allow him to implant into more brains, do more studies and experiments, and get more data. Even after countless hours, $60,000 of his own money, three risky surgeries, and a close brush with brain damage, the possibility of stopping does not occur to him. In fact, the myriad setbacks almost seem to galvanize him. “I’m not giving up,” he says. “If you give up, then you’ve failed. Don’t give up, and you never fail.”

Dr. Kennedy will present more interim data and results at the 2016 American Society for Stereotactic and Functional Neurosurgery biennial meeting in June, where he was invited to present to a group of neurosurgeons who would ultimately be using this theoretical technology. Later in the year, Dr. Kennedy will submit an abstract to the Society for Neuroscience meeting. He is also considering launching a Kickstarter to crowdfund that much-needed investment that could get him across the finish line (“I’m not sure if it’s legal, but I’ll check that out first,” he says). Until then, he will carry forth, one man barreling down his own self-styled path to innovation — and perhaps a future of jarred brains floating through the stratosphere.

Daniel Marin Medina is a Colombian-born, Bronx-based illustrator. He uses queer theory as inspiration for drawing bodies and portraits. Follow him on Instagram.

This article originally appeared on PrimeMind and is republished here with permission.