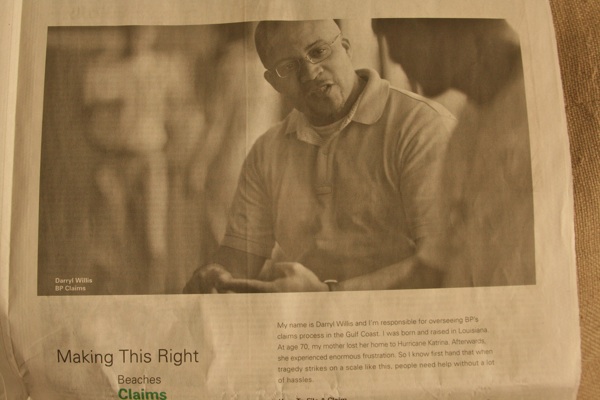 For the most part, I’ve avoided taking potshots at BP.

It’s just too damn easy and it’s not particularly productive.

Besides, plenty of other writers have been busy doing exactly that– it’s not hard to find material; even The New York Times had a front-page story about BP’s CEO, who has had to apologize to families of the 11 workers killed on the oil rig for his thoughtless statement, “There’s no one who wants this over more than I do. You know, I’d like my life back.”

But when I opened Wednesday’s Wall Street Journal to find a full page ad featuring Darryl Willis, the BP employee responsible for overseeing claims related to the oil spill, I was completely flabbergasted.

The BP spin machine–which has attempted to soothe us into a mental coma with the simplistic (but seemingly empty) refrain “We will get this done. We will make this right,”–really worked a good one with Willis.

In the ad, Willis explains that he was “born and raised in Louisiana” and that he “volunteered for this assignment because this [the Gulf Coast] is my home.”

“Willis may well make the connection between Katrina and the BP oil spill, but BP has no right to do so.”

I don’t doubt Willis’ good intentions–when a disaster strikes, especially in one’s hometown, most sentient, sensible, and sensitive people want to do something to help.

What I have a problem with is BP’s exploitation of Willis’ story to strike a particular chord in readers. “At age 70,” Willis says in the first paragraph of the five paragraph advertisement, “my mother lost her home to Hurricane Katrina. Afterwards, she experienced enormous frustration. So I know first hand that when tragedy strikes on a scale like this, people need help without a lot of hassles.”

Here’s the issue: Hurricane Katrina was a natural disaster. One whose effects were most certainly exacerbated by human negligence, but a natural disaster nonetheless. The BP oil spill was not a natural disaster. It was a disaster caused by the deliberate decisions of a company’s executives to ignore warning signs, to fail to correct safety breaches, and to continue chasing profit as long as possible.

Willis may well make the connection between Katrina and the BP oil spill, but BP has no right to do so.

Read How to Evaluate Claims about Big Oil to learn how you can assess oil companies’ messages more effectively.