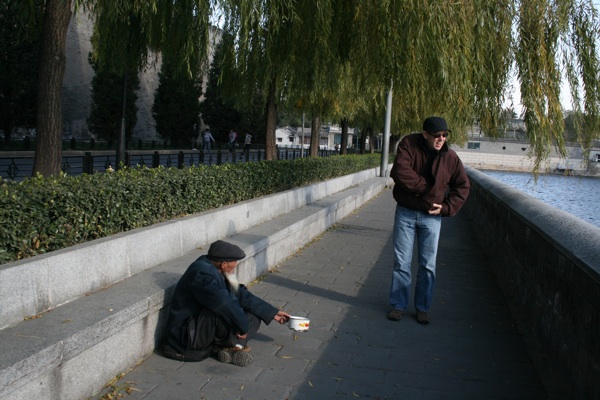 Writer Tom Hodgkinson thinks the privileged should practice being poor.

Over on the Guardian’s environmental blog, a debate is raging.

On one side–and he’s pretty much a one-man team–is writer Tom Hodgkinson, who argues that “far more sensible than a ‘make poverty history’ campaign would be a ‘make wealth history’ campaign. “It is, after all,” he says, “the wealthy people who do all the damage.”

In his rather convoluted defense of this somewhat interesting, albeit totally unlikely to ever be realized idea, Hodgkinson grumbles that we’re all too divorced from the land, ourselves, and each other. We’re too tech dependent– “addicted” is the word he uses (though, curiously, he’s sharing his thoughts on a blog… I’ll leave you to ponder that one)– too consumerist.

We’re destroying the planet, he suggests, though we could save it, maybe, “[i]f we lived poor for just one day of the week….” In addition to “instantly reduc[ing] pollution by a seventh,” we–the world’s wealthy– “would rediscover the simple pleasures, such as cards, chess, backgammon, draughts, talking, dancing and playing music.”

I’m all for reducing consumption, unplugging more frequently, and spending quality time with the people I love. But I’m not sure I buy Hodgkinson’s argument that a “make wealth history” campaign would solve the world’s problems or make the world any more just for the poor, especially when he doesn’t really describe what such a campaign might entail besides harking back to the supposed “good ole’ days” before Blackberrys and iPhones.

‘Accidentally Wes Anderson, The Book’ is a nostalgic mix of colors and symmetry
30 awesome Japanese idioms we should start using in English
9 boardless, cardless games to play anywhere
From sacred deer to mochi, Nara deserves a spot on your cultural tour of Japan
Rajasthan’s epic camel festival is two days of fur-cutting, dancing, and races