Most of all, I love Afghanistan’s mountains. Some of the most beautiful mountains in the country surround the town of Bamiyan, and after years of working in the country helping to equip and train the Afghan National Women’s Cycling Team, I was finally able to arrange a trip.

Bamiyan has consistently been one of the safest regions in Afghanistan, although it’s currently surrounded by provinces under Taliban control, which makes getting there harder than it was a few years ago. Roadside bombs, checkpoints, and eruptions of violence along the main roads into Bamiyan have become commonplace. The most convenient way in and out for internationals is by helicopter, but luckily the airstrip was recently enlarged so that small commercial flights can land. 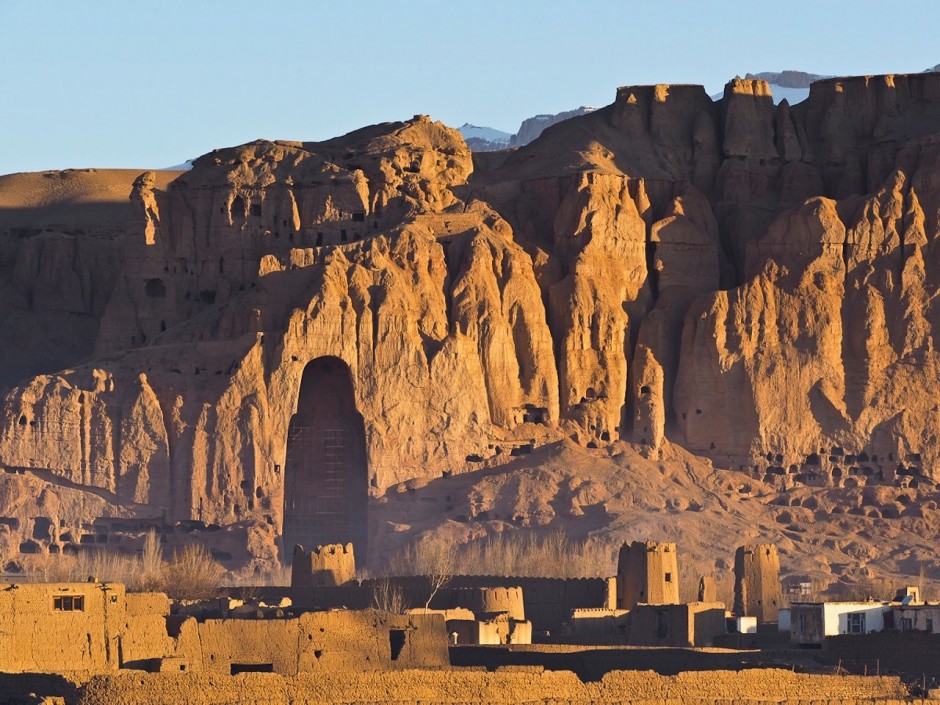 I finally arrived in Bamiyan, on a dodgy flight with East Horizon Airlines. I had heard horror stories from friends of the plane coming in swinging side to side, nearly clipping the hillside of the City of Screams on its landing, of flights taking off hours before their scheduled time without warning, and without all the passengers. The airline simply has a general feeling of unpredictability. Still, it's the only flight going, and they give you a juice box and an Iranian sponge cake for the 30-minute flight out of Kabul, so how bad can it be, right? Other than my seatbelt not working, and the entire row ahead of me not bolted into the floor securely, it was a fairly uneventful flight...apart from the landing, where I swear something bounced off the plane when we touched down.
Photo: Deni Bechard 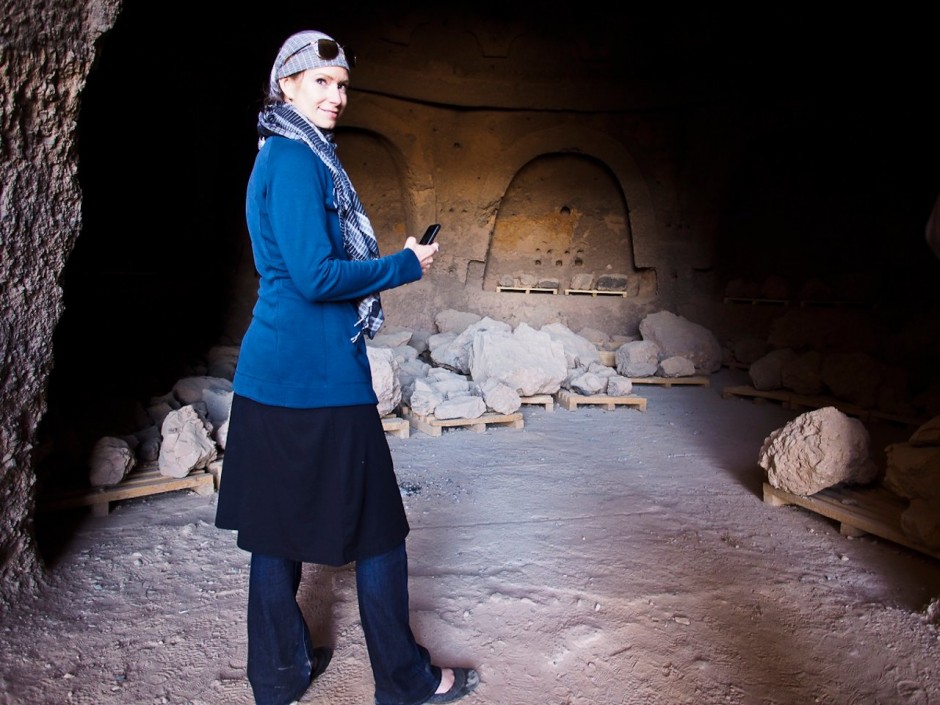 After dropping my bags at the guesthouse, I headed outside to start walking. The joy of walking is amplified after the self-confinement of Kabul in the wake of pre- and post-election violence this year and the continued security concerns. There have been no weekly hikes up the mountain in Kabul, no walking to cafes only a few blocks away, only the occasional ride on a motorcycle breaking the monotony. An easy 10-minute walk brought us to the large Buddha niche and the caves that surround it. At the base of the enormous niche was a fenced-off area with piles of rubble, all that’s left of the enormous Buddha that the Taliban blew up in March 2001.
Photo: Deni Bechard 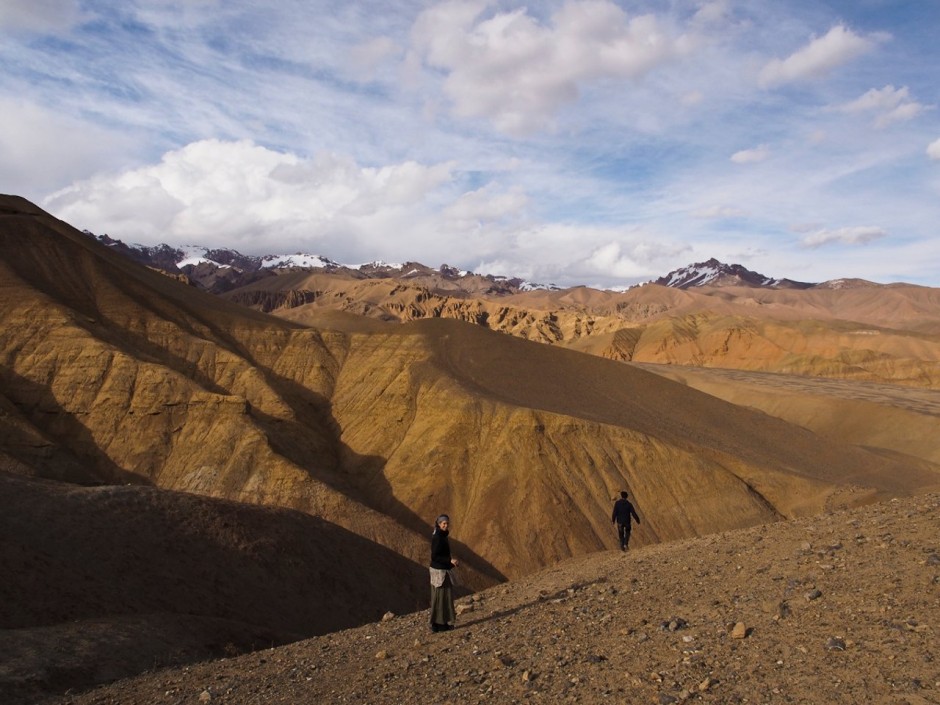 Walking the plateau above the large Buddha niche

A steep hike up the side paths, following a system of caves that were inhabited until only recently, brings us to the open plateau above the large Buddha niche. Dotted throughout the landscape are remnants of smaller buddha niches carved into the walls, less famous but just as impressive. According to mine clearance maps, this is an area officially cleared of land mines, yet every springtime, the rains unearth the occasional unexploded ordinance, so it's always important to stay on the path—although at times the path was difficult to follow, or even see. But the views? Mind blowing.
Photo: Deni Bechard 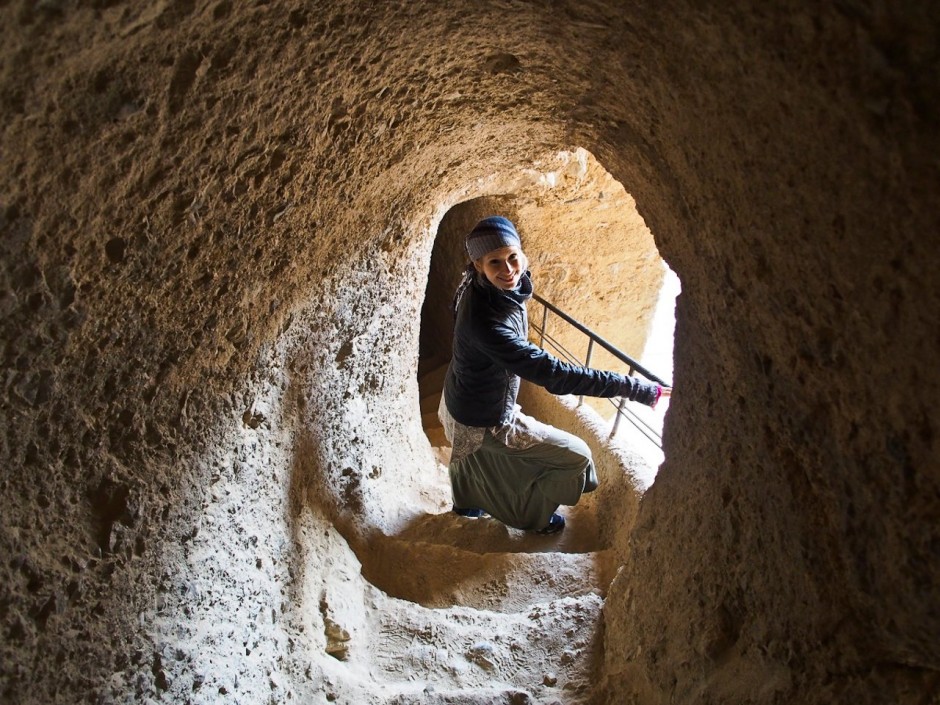 Walking around the Buddha niche

We continued past the trenches and after some scrambling through a ravine, trying not to think of landmines but keeping an eye out for shiny objects, emerged down valley near the small Buddha niche. This niche is more stable than the large one, and you're still allowed to climb the stairs leading up to a viewpoint across the entire valley. Lots of side caverns with remnants of the mosaic tiles that once covered the walls can be explored, but the piles of stones stacked and labeled at the bottom is a sobering reminder of what has been forever lost here.
Photo: Deni Bechard 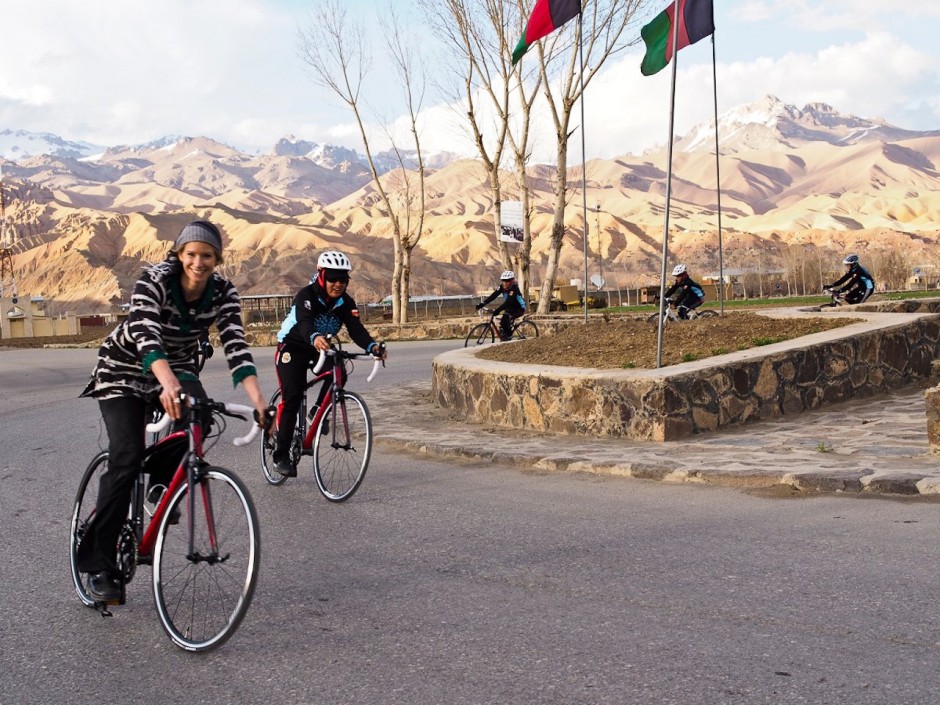 Practice ride with the Afghan National Cycling Team through town

The chance to ride newly paved, empty, peaceful roads was an opportunity I wanted to share with the team, which ordinarily is forced to train on the busy trucking highways outside of Kabul. After a morning of bike assembly, we took the bikes out for an evening test ride through town to make sure all the bikes I had brought—new racing bikes donated by Liv—bad been assembled correctly. As I was the sole bike mechanic for this trip, and a single-speed mountain biker at that, I was most concerned that the brakes worked and that I hadn’t put the derailleurs on backwards!
Photo: Deni Bechard 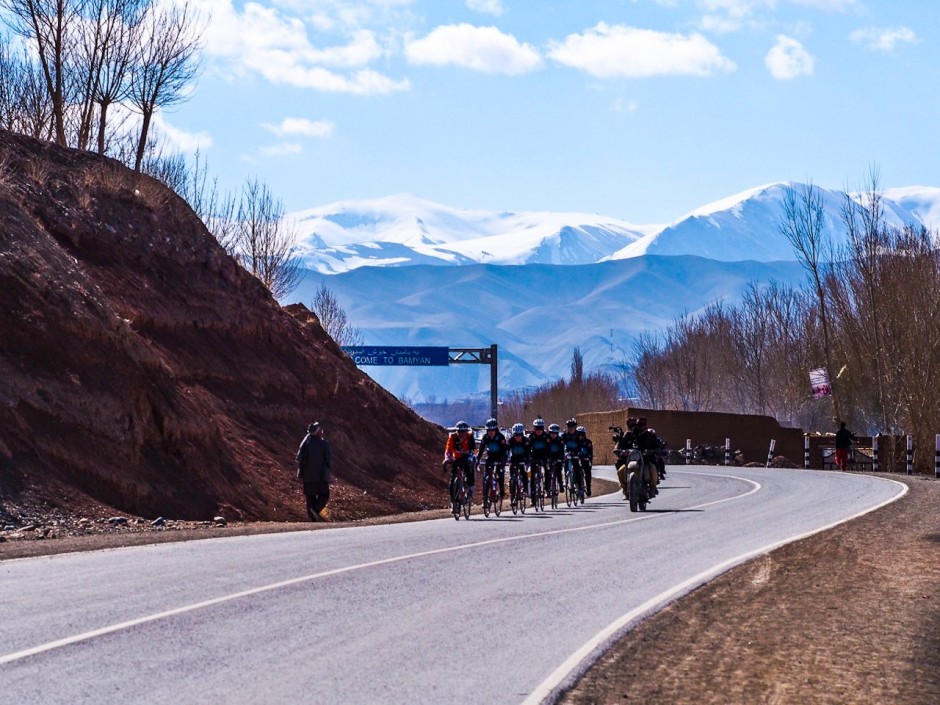 All systems go. The girls were happy with the bikes and excited to ride. So the next morning we were up early and riding as a team on the paved roads that lead out from Bamiyan. We focused on endurance, pacing, and riding in a peloton, something that's hard to focus on when you have trucks, cars, and motorcycles whizzing by at high speeds. The roads here are much more peaceful, and the girls were able to focus on riding. In the end, they rode the farthest they’ve ever ridden, and everyone was exhausted but smiling.
Photo: Deni Bechard 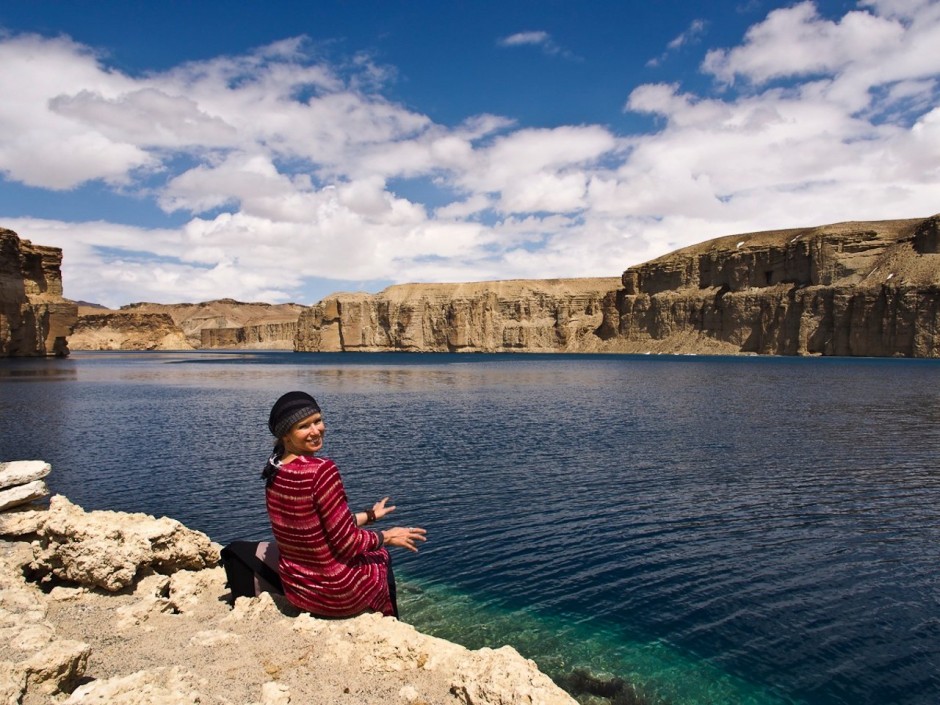 Sitting beside the turquoise water of the Band e Amir lakes

The following day we hired a driver to take us out to Afghanistan’s first national park, Band e Amir. The park is of keen of interest to me beyond its renowned beauty, as the park service recently hired a team of female park rangers.
Photo: Deni Bechard 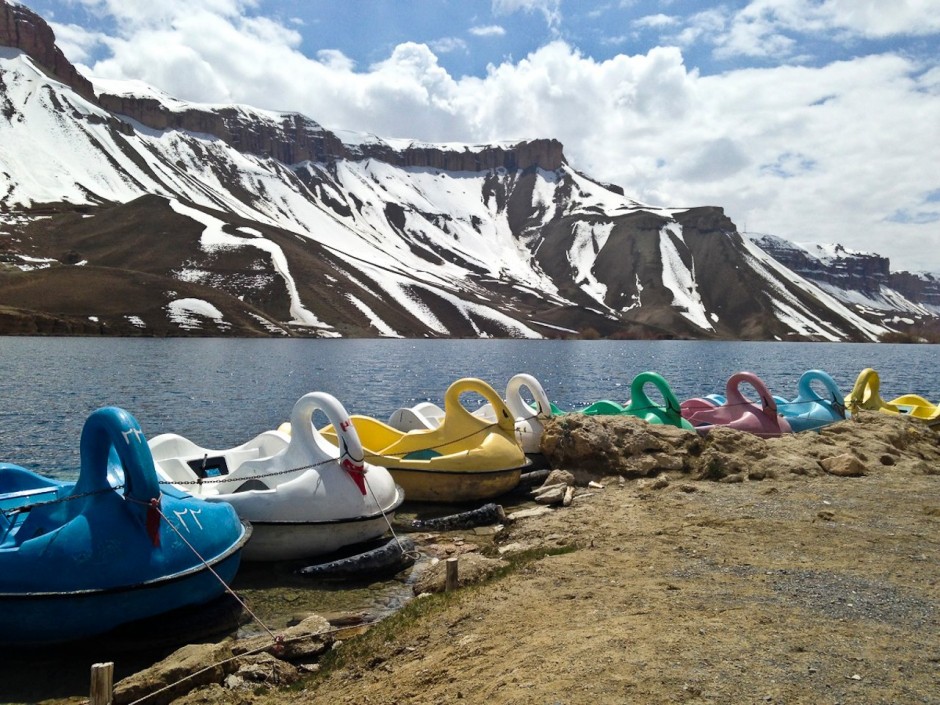 Swan boats still tied up from the winter season

The deep turquoise lakes and the surrounding area are a favorite summer holiday spot for Afghans and expats alike to hike, swim, and picnic. Although as it was early springtime, we had the lakes and swan boats all to ourselves.
Photo: Shannon Galpin 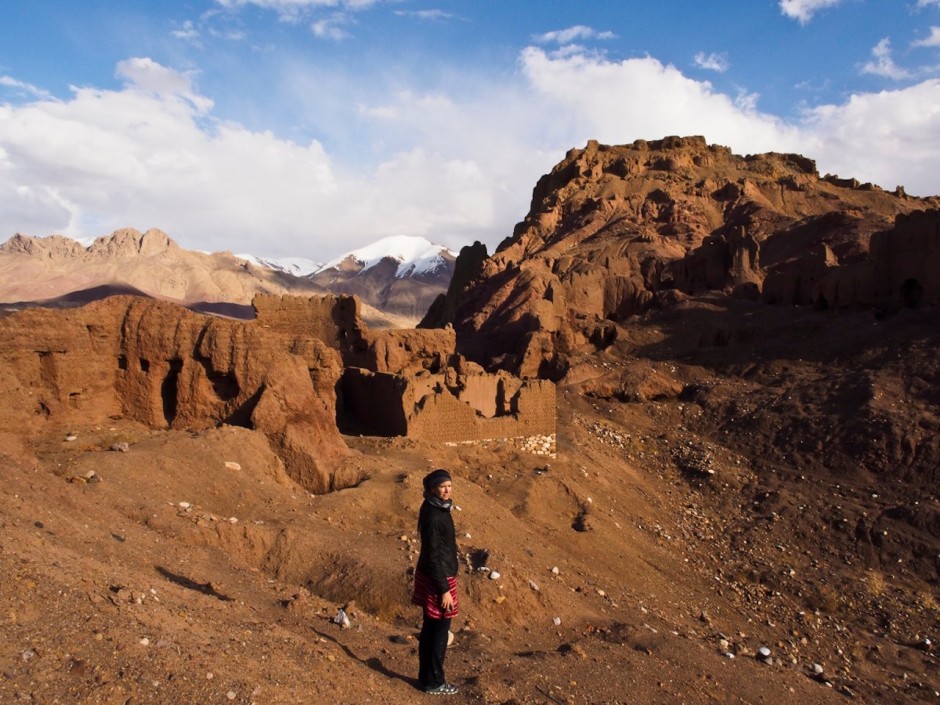 Where the trail seems to disappear

We followed up the trip to Band e Amir with a short visit to the Red City, Share e Zohak. I'd read a little about this place and seen a few photos and figured it would be an interesting historic stop. When we pulled up to a field across from the ruins, and looked up at the mountain in front of us, my jaw dropped. Like something out Genghis Khan's time (and in fact his grandson fought and died here), the city is built into the side of the mountain. An amazing amount of the original structures are preserved with ornate details carved into rock. We crossed the field and went up the path, looking at the fields of white rocks and some red ones, marking landmine clearance. As with the plateau above the Buddhas, springtime rains and erosion uncover and move landmines every season, so we focused on staying on trail.
Photo: Deni Bechard 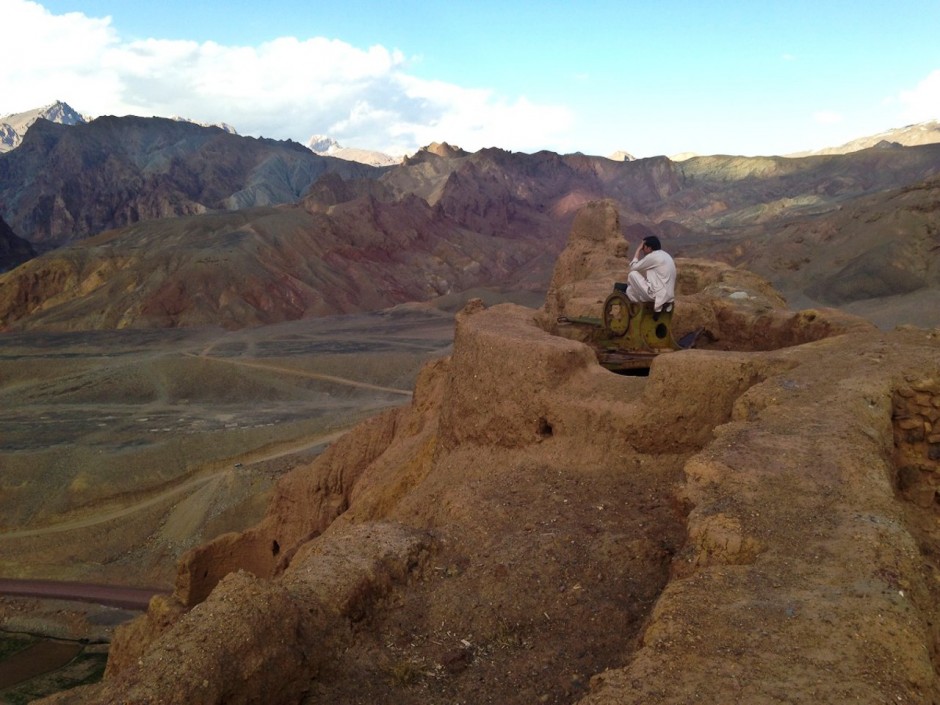 The path winds its way through what was once a city, and up to the tippy-top of a lookout fort from which you can survey the entire valley. An old Soviet gun turret still rests at the top. Tired, hungry, and dusty, we headed back down through the oncoming dusk, past the roadside guards who waved as we drove to the guesthouse.
Photo: Shannon Galpin 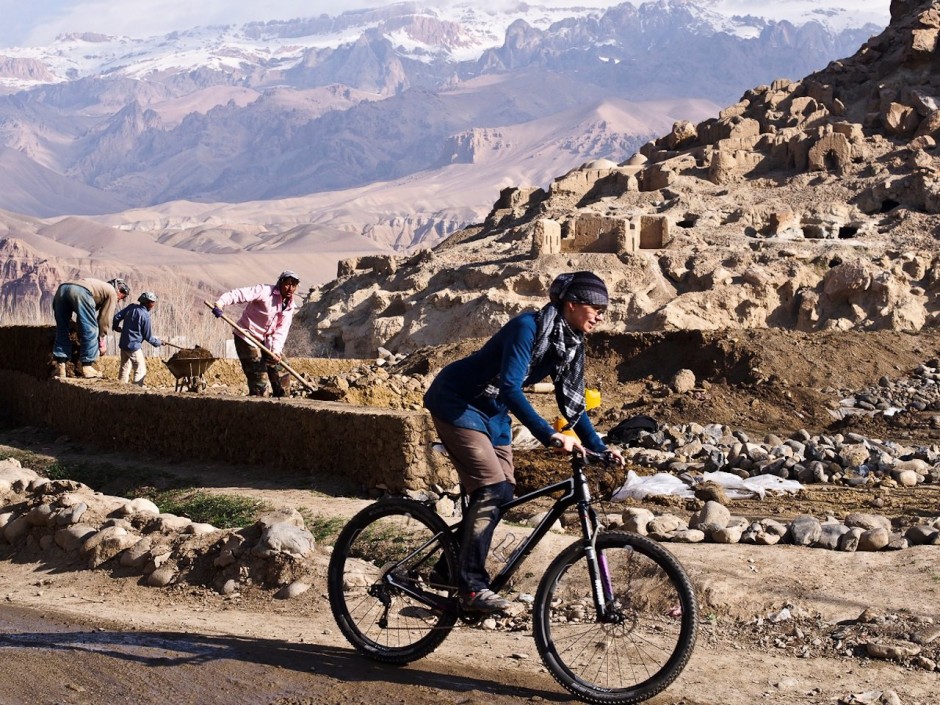 We woke at first light for an early morning ride through town and up to the City of Screams. Share e Gholghola was conquered by Genghis Khan, and the noise from the violence that ensued earned the citadel the ominous name. It once held another Buddha, and today makes for a visually fascinating hike through a period of history few get to experience due to Afghanistan’s insecurity and ongoing conflict.
Photo: Deni Bechard 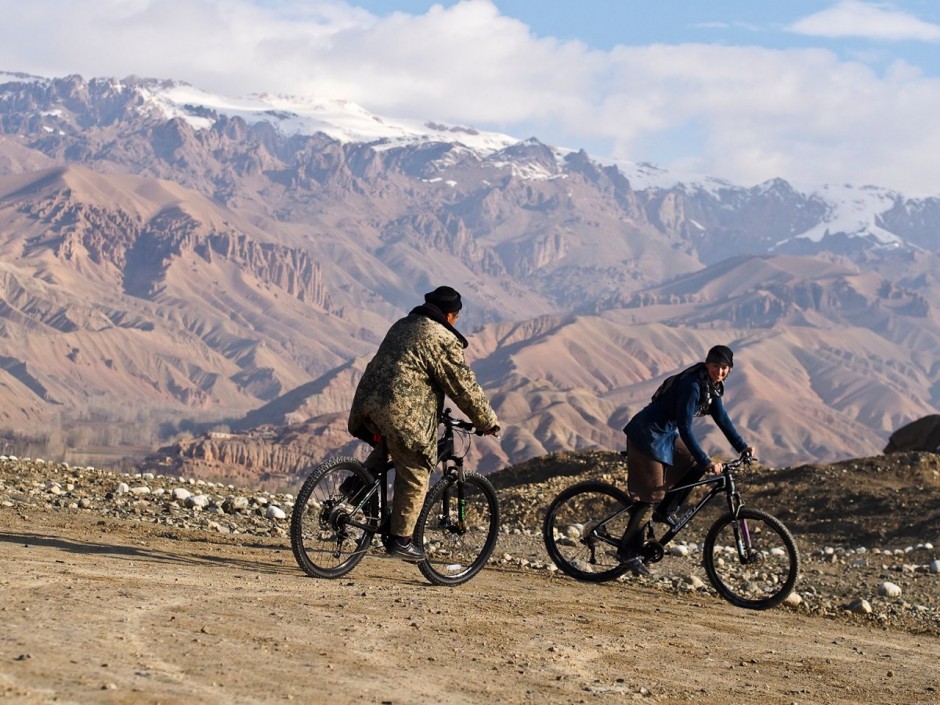 At the entrance to the City of Screams

We offered the security guards our bikes to take a spin, proving once again that bikes make the best conversation starters. Everyone loves to ride a bike.
Photo: Deni Bechard 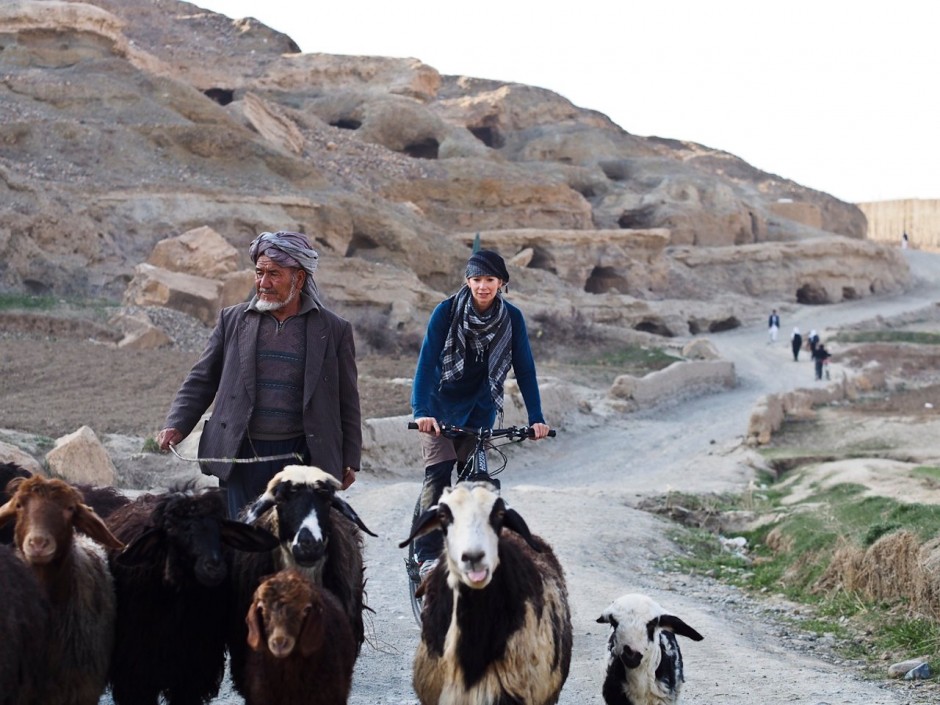 We spent the afternoon riding to the Foladi Caves, amusing the curious local men and boys who occasionally rode with us, and finally climbing back up the mountain behind the Buddhas to continue to play on the bikes on the plateau we'd hiked and take in the breathtaking views again. This time, I ventured off the trail and swiftly encountered a reminder that landmine clearance is never 100% in the mountains. A shiny object I rode past turns out to be a small UXO. I took a photo and sent it off to a friend in the military to inquire about its potential for damage, and he assured me it’s enough to blow off a foot and that I should report it so a mine clearance team can sweep the area.
Photo: Deni Bechard 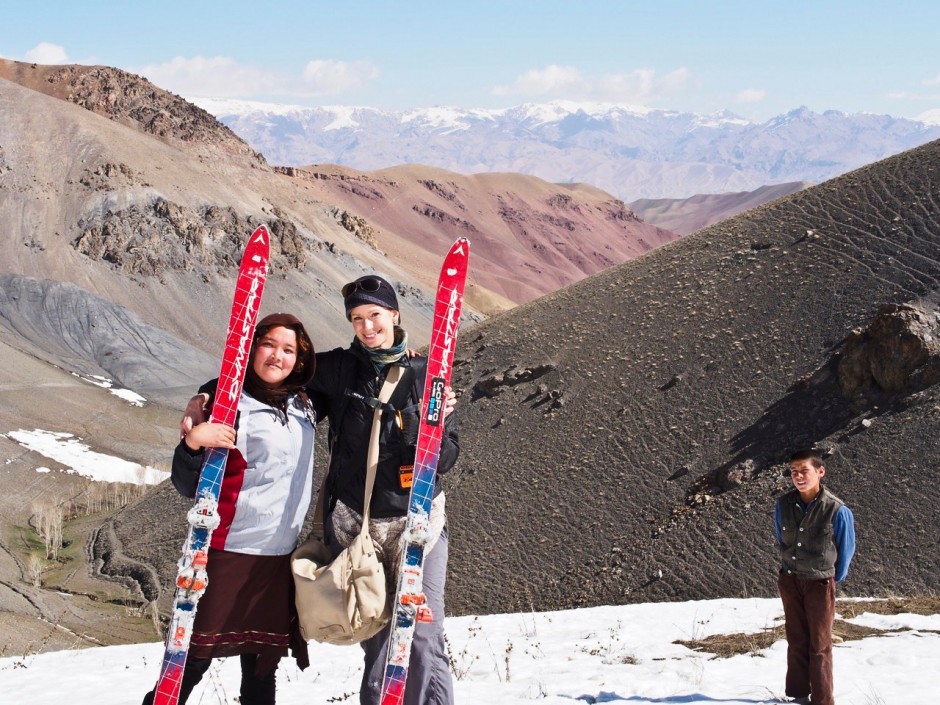 We drove out to a remote valley with Sajat, one of the ski guides who works in Bamiyan. Parking the car, we hiked the rest of the way up to the snow line on foot. The girls were just learning to turn, but their huge smiles showed their enthusiasm. It reminds me of why I taught my daughter to ski in Breckenridge a few years ago, the mix of fear and elation coexisting in the same expression.
Photo: Deni Bechard 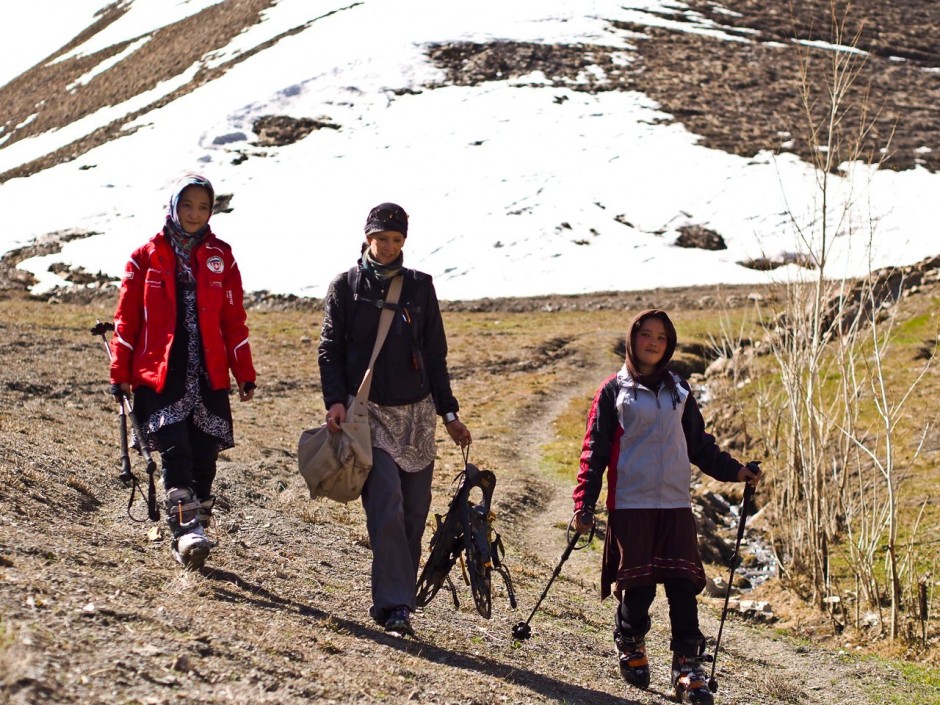 Walking back down for breakfast with the girls

On the way back down, I talked with the girls about skiing, sports, and school. One of them knew how to ride bikes too, so we made plans to have her join our evening ride with Zahra, a young Afghan woman and university student at the women’s college who's teaching girls to ride bikes in Bamiyan.
Photo: Deni Bechard 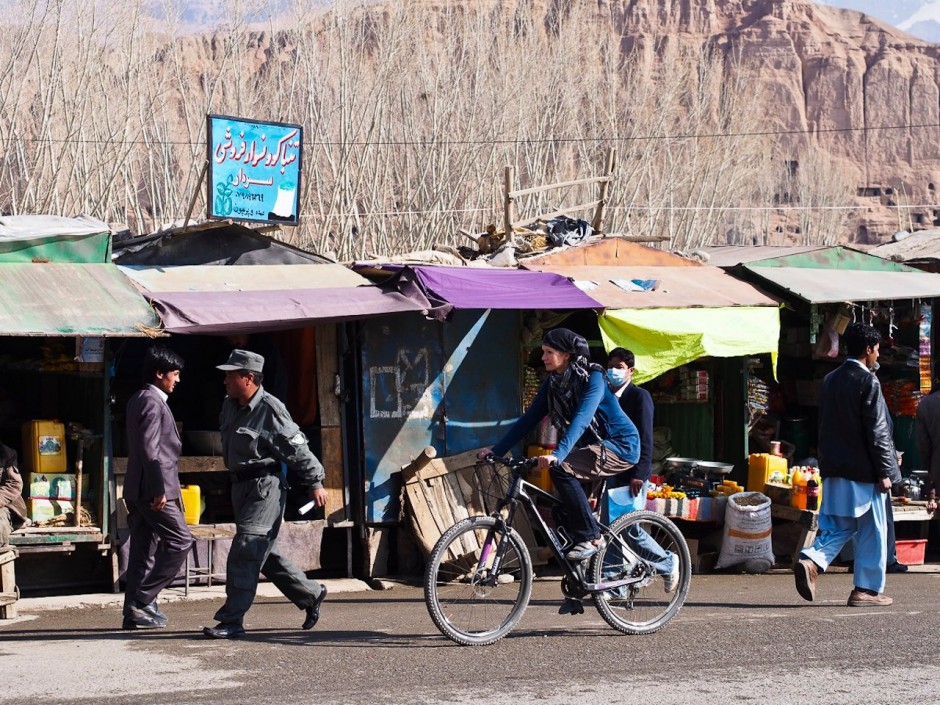 We met by the Buddhas and rode for an hour or so, collecting quite the crowd as we went. A group of young boys immediately joined our gang of three, and a series of impromptu races kicked up dust as our motley crew sprinted from one end of the field to the other. A young group of girls watched us curiously—perhaps girls that Zahra will be able to get on bikes someday?
Photo: Deni Bechard 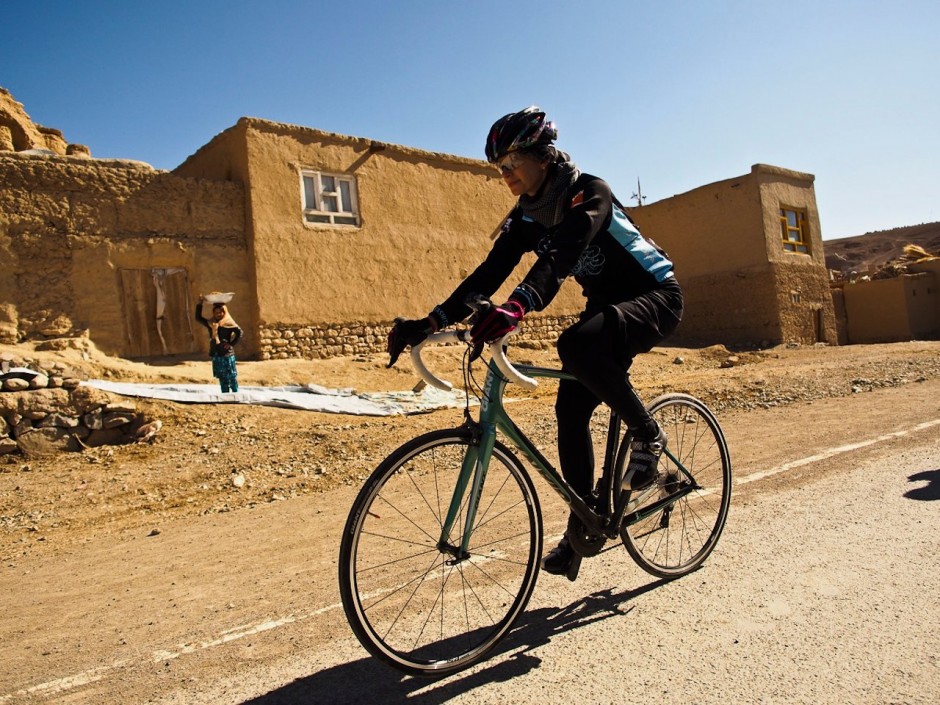 An evening ride turned race with the local boys

As dusk fell, one of the younger boys told me that since he rode with us, he was going to go home to teach his sister to ride. That is progress. One step at a time. In a country that's just starting to see girls ride bikes, that still considers bike riding culturally offensive, Zahra and girls like her will continue to lead the charge, teaching girls to ride, riding herself, and setting an example that Afghan girls can do anything they choose to, even ride a bike.
Photo: Deni Bechard

Tagged
Cycling Ambassadors
What did you think of this story?
Meh
Good
Awesome
✖
travelstoke
Download the mobile app
stoked by