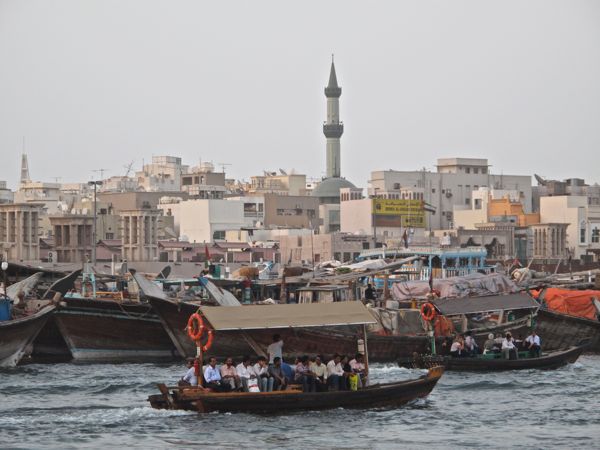 How two 140 character messages changed my mind about the Burj.

By the time the evening news broadcast on Monday, I was already over the Burj.

I’d seen no fewer than four TV spots with snazzy graphics comparing the height of the Burj to the heights of the Empire State Building, the Willis Tower, the Eiffel Tower.

I’d heard too many redundant comments about Dubai’s wealth (former) and debt (current), too many “analyses” about the “seeming paradox” of a strictly religious people surrounded by such opulent, ostentatious gluttony.

The news cycle may only be 24 hours these days, but sometimes those 24 hours can really seem to drag along.

And so it was that Monday night, right before I signed off the computer for the evening, I banged out an exasperated tweet:

“You know what I don’t care about? The Burj, that’s what.”

Lots of stuff we throw out on Twitter’s blank wall doesn’t stick, but this tweet did.

“@collazoprojects Agree.. So fed up of hearing about it. I don’t see what’s to be so proud of? Tsss.”

“@collazoprojects I know! My husband was trying to tell me about it tonight.”

One person didn’t agree, however, and that was travel writer Lara Dunston, who I respect for her professionalism and her genuine and generous support of colleagues, including myself. An expat who has called Dubai home for more than 10 years, Lara tweeted back politely, but firmly:

“@collazoprojects The people who care about the Burj are the people who live there & love the place, and for whom it’s symbolic of so much…”

“@collazoprojects …which is why I care about it; I think we must feel the way Aussies felt when the Opera House or Harbour Bridge opened”

And just like that, with two tweets, I realized that maybe I *did* care about the Burj.

The problem was that mainstream media had totally overlooked the story that Lara was alluding to in two simple tweets.

She elaborates in her description of the photo that appears at the top of this article:

The pic is of Dubai Creek, the historical centre of the city and lifeblood of Dubai, taken from the wharf at Bur Dubai Souq. There’s something happening down here 24 hours a day, but I love it most in the evening when, with the fairy lights are on the dhows (wooden boats in the background)…. This is the first part of Dubai I ever visited when we moved to the UAE in 1998 and it’s still my favorite part….

There were only a handful of shopping malls in the city then, Burj Al Arab had not yet opened and there were no crazy manmade island developments. It cost less than 20 cents to cross the Creek on an abra (the main boat in the pic) then and now it costs around 30 cents. For many people who live in this area, this is the real Dubai.

When Terry and I lived in the city full-time (ie. before we put our things in storage and decided to live out of our suitcases four years ago), we would walk down here to the Creek several evenings a week…. Friday (like Sunday in the Western world) is liveliest when everyone seems to be down there shopping in the souqs. We saw this side of Dubai far more often than we ever saw the sumptuous shopping malls or extravagant five star hotels, which would only be when we’d go shopping and go out on weekends.

For most people in the city, as in any city, the luxe side represented by the media isn’t the side the locals experience every day. The difference is that with New York, Paris or Sydney, the media also makes an effort to discover and report on the everyday life of the city too – in Dubai they’re not interested. And I could write a novel about why that’s so.…

The Burj is more than snazzy graphics and a gasp-inducing fireworks show.

And that’s precisely why I was “over” the Burj before I really knew anything about it.

All the coverage was from the outside looking in: “Look how Dubai bested us!”

Nobody but Lara, it seemed, was inside looking out. It took a travel writer’s two tweets to make me aware why I found mainstream media coverage of the Burj so tiresome:

It lacked the human element.

Thanks to Lara for restoring it.

Read other Matador editors’ takes on the Burj. Hal Amen’s Dubai, the UAE, and the World’s Tallest Building can be found on MatadorTrips, and Tim Patterson’s Could the Burj Kahlifah Collapse? is on MatadorAbroad.

Learn more about Lara in this article from our archives: What’s In Your Backpack, Lara Dunston, Travel Writer?