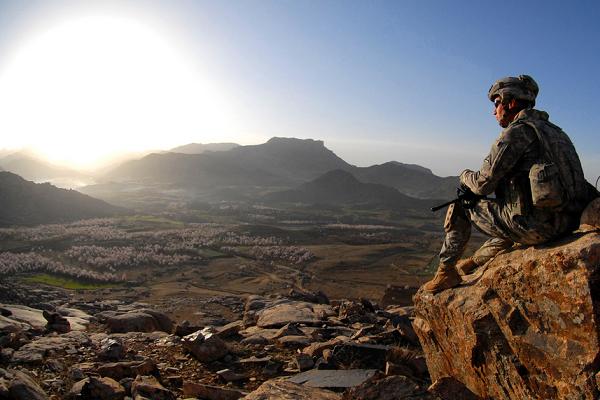 Photo: The US Army

In what may be the most unexpected news out of Afghanistan in a long, long time, the US discovers massive mineral deposits.

The “bleak Ghazni Province seems to offer little,” noted the caption on the header photo leading into the article in Sunday’s New York Times, and the photo itself seemed to confirm the observation, a spectrum of grays and browns on a flat, rock-pocked landscape.

But beneath it all, apparently, are rich veins of the world’s most precious minerals that “are so big and include so many minerals… that Afghanistan could eventually be transformed into one of the most important mining centers in the world….,” said Times journalist James Risen.

Even General Petraeus was awestruck by the discovery and its “stunning potential.”

For whom, though, remains to be seen.

Risen speculates that the discovery of minerals could incite the Taliban to redouble its efforts to stake territorial claims. He mentions “resource-hungry” China’s potential interests in the region. He fails to mention–at least not overtly, anyway–potential American interests, simply noting that

A “Pentagon task force has already started trying to help the Afghans set up a system to deal with mineral development. International accounting firms that have expertise in mining contracts have been hired to consult with the Afghan Ministry of Mines, and technical data is being prepared to turn over to multinational mining companies and other potential foreign investors. The Pentagon is helping Afghan officials arrange to start seeking bids on mineral rights by next fall….”

The discovery of the minerals could certainly represent a significant turning point for Afghanistan, which is currently ranked 181 (out of 182) on the United Nations’ Human Development Index, which examines lifespan, education, and overall quality of life to determine a country’s position relative to other nations.

At what cost might this discovery come with respect to the country’s current political situation, though? Not to mention environmental issues.

What do you think about this news? And how should Afghanistan act to protect its own interests? Share your thoughts in the comments.

Afghanistan isn’t the only country with rich mineral deposits that is struggling to retain control of its own resources. Read “Bolivia to Become World Battery Capital?” to learn more about this phenomenon.

What did you think of this article?
Meh
Good
Awesome
Bookmark
Posted In
Culture
Destinations
Afghanistan

The surf report from Kandahar