Bangkok seems to be in a perpetual state of celebration. If you visit a bustling night market, lively Buddhist temple, or packed food court on a random weekday, you might assume you’ve stumbled on a festival, but this is just daily life.

A few times a year, the people of Bangkok take the party up a notch with raucous celebrations or vibrant religious events. Bangkok has three special holidays that are worth planning a trip around; the best is Songkran, a celebration famous for water fights, parades, and alcohol-fueled parties. At the other end of the party spectrum is Loy Krathong, a beautiful and solemn holiday in which people set candle-lit boats adrift on waterways. The third major event is Chinese New Year when Bangkok throws a huge celebration on Yaowarat Street, which resembles Times Square on December 31.

As you plan your trip to Thailand, make sure to check the holiday calendar because attending Bangkok events will greatly enhance your trip. Some dates have been impacted by COVID-19. Check the official tourism page for up-to-date information. 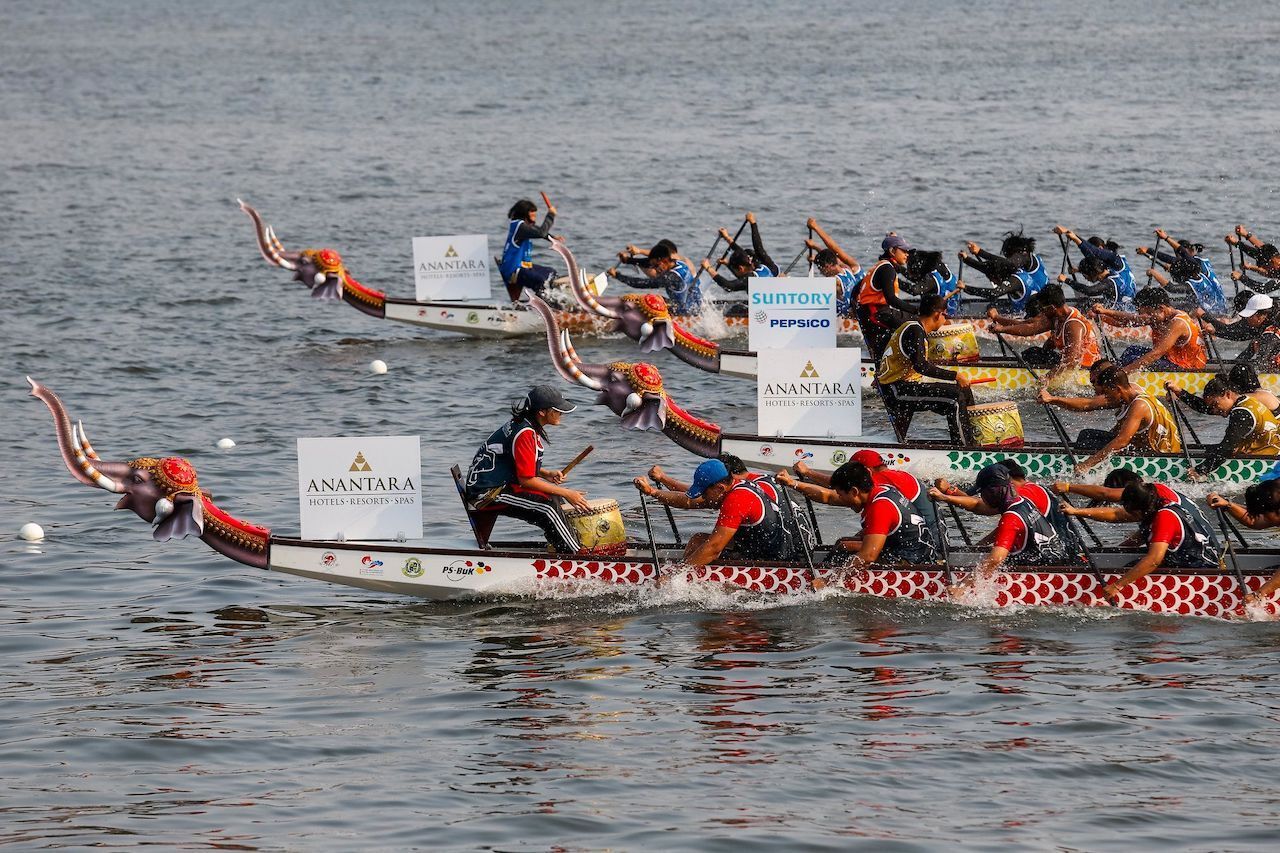 Elephant Boat Race and River Festival — Elephant Boat Race and River Festival is a three-day party to raise money for elephant rehabilitation in Thailand. The event takes place on the banks of the Chao Praya River and features daily boat races, performances by top DJs, art exhibitions, fireworks, kite festivals, and costume contests. In between events, visitors can enjoy a drink in the beer garden and eat at food stalls sponsored by top chefs and popular restaurants in Bangkok. 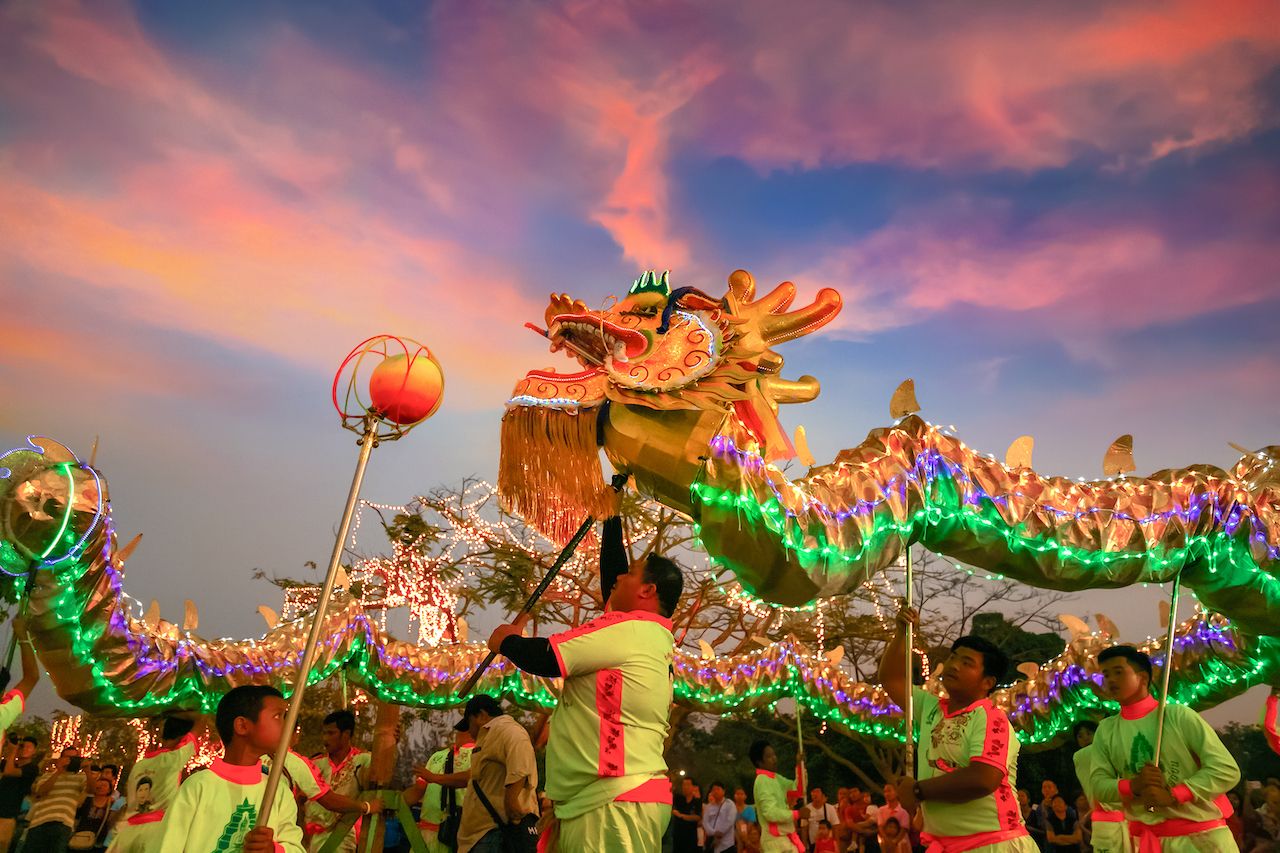 Chinese New Year — Due to its sizable Thai-Chinese population, Bangkok hosts one of the biggest Chinese New Year celebrations in the world. Nearly one million people descend on Yaowarat Street for parades, dragon dances, traditional music, street food, and fireworks. Worshippers pack the temples and fill the air with fragrant incense smoke as they pray at shrines and light candles. Although the events center around Chinatown, shopkeepers throughout the city decorate buildings with red lanterns, and many people don red clothing, making it a festive time to be in the city. 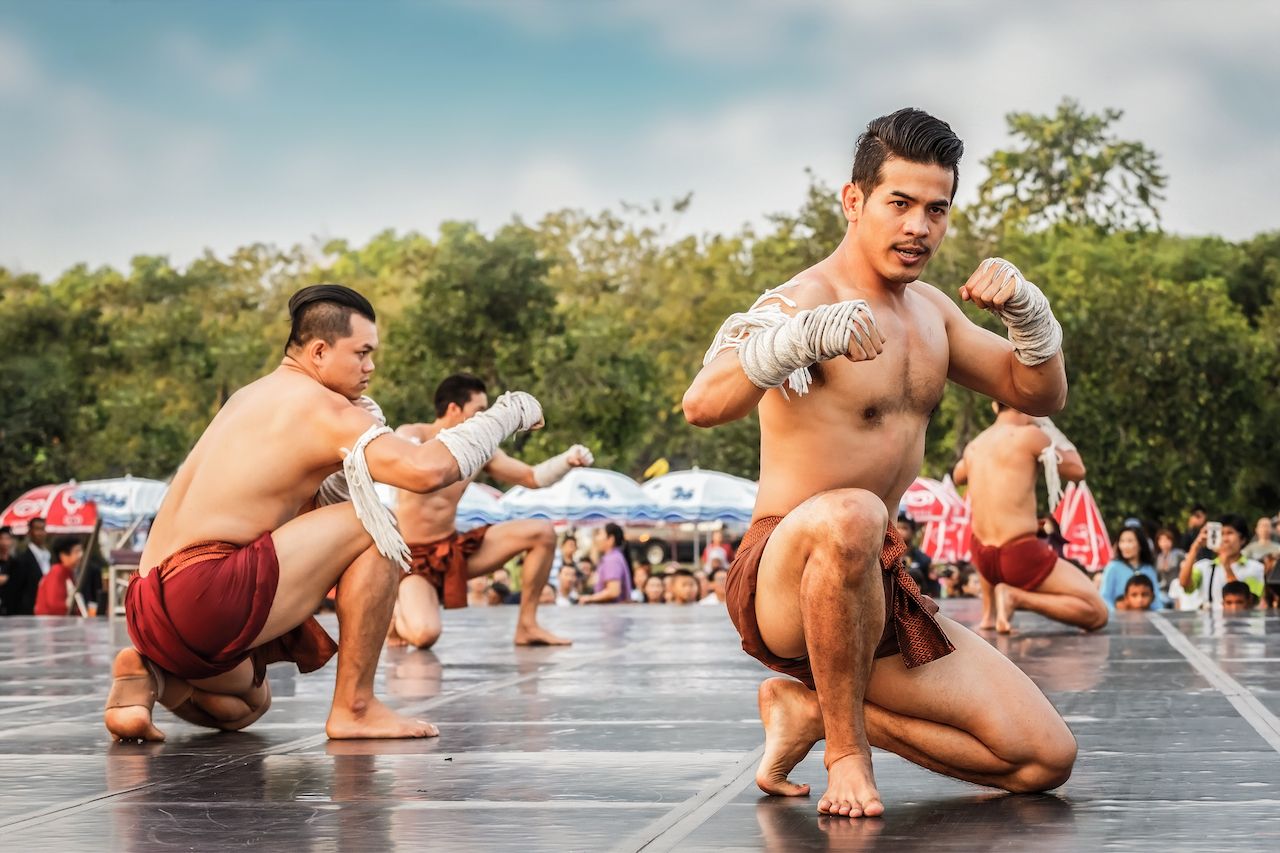 Wai Kru Muay Thai Ceremony — Thai kickboxing, or Muay Thai, is an ancient sport practiced all over Thailand. In March, kickboxers migrate to Ayutthaya an hour north of Bangkok for a colorful two-day festival to compete in tournaments and pay respect to their teachers, masters, warriors, and Thai kings. The festival, which takes place in the photogenic ruins of Ayutthaya, is more than just kickboxing; it’s a celebration of Thai culture and history. The festival’s market has local crafts and food plus tattoo booths where visitors can get Yantra tattoos, which are sacred designs said to offer power, protection, health, and wisdom to fighters or people who want some local ink. 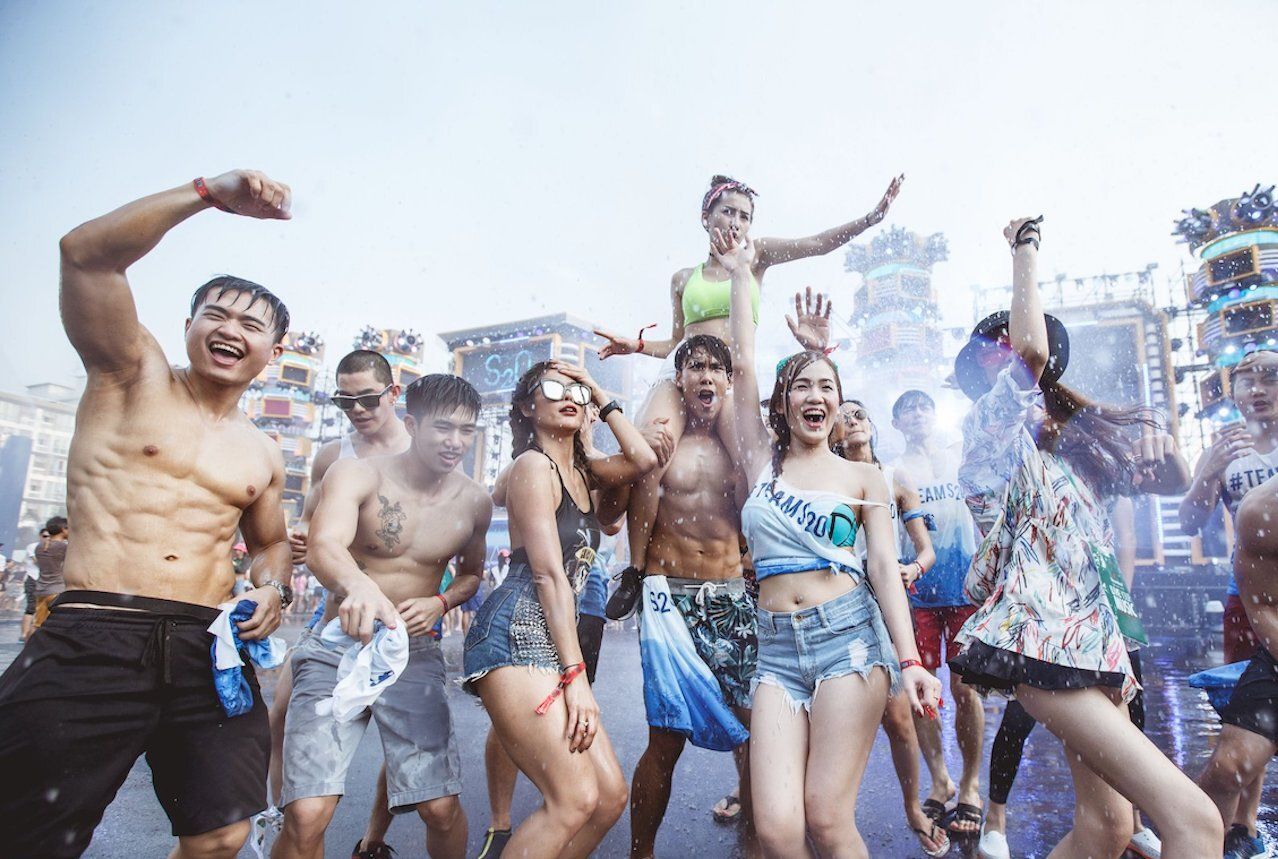 S2O Music Festival — Dubbed “the world’s wettest party,” Bangkok’s S2O Music Festival is part rave, part water fight. Held around Thai New Year, the three-day event is the biggest music festival in town, featuring a lineup of internationally recognized DJs who crank out dance music from the main stage. In the past, musicians such as Tiesto, Alison Wonderland, 3 Lau, and San Holo performed at S2O. If you decide to go, wear a swimsuit, bring a water gun, and be ready to party. Purchase tickets online or at the door for about $60 per day or $150 for a three-day pass. 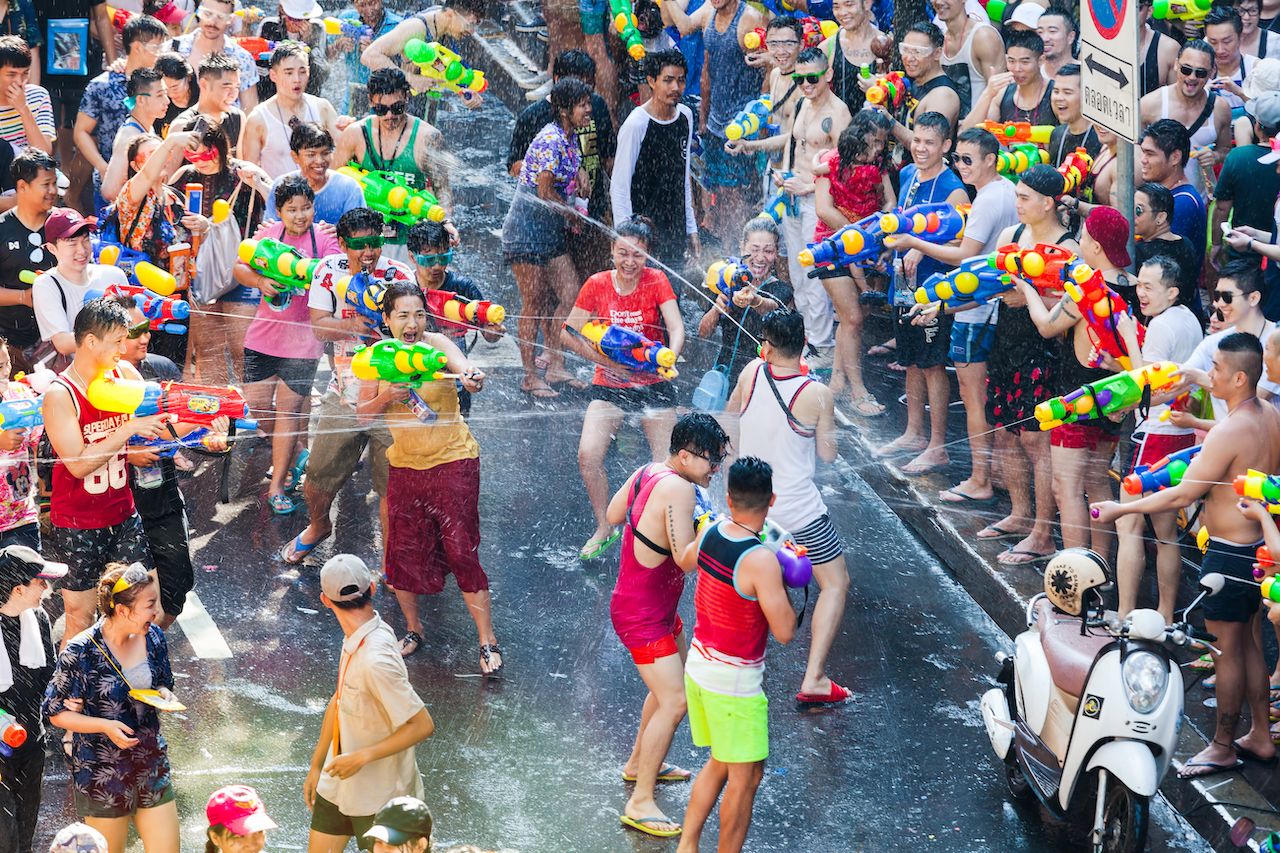 Songkran — Songkran, or Thai New Year, is the biggest celebration in Bangkok. Both solemn and festive, it’s a time to give thanks, reflect, and party hard with family and friends. Thai people celebrate by pouring water over each other to wash away the sins of the prior year. Sometimes, this is done politely at reverential ceremonies in Buddhist temples; other times it manifests in raucous water fights. During Songkran, you’ll find wet and wild street parties all over the city with music, dancing, and of course, tons of food. 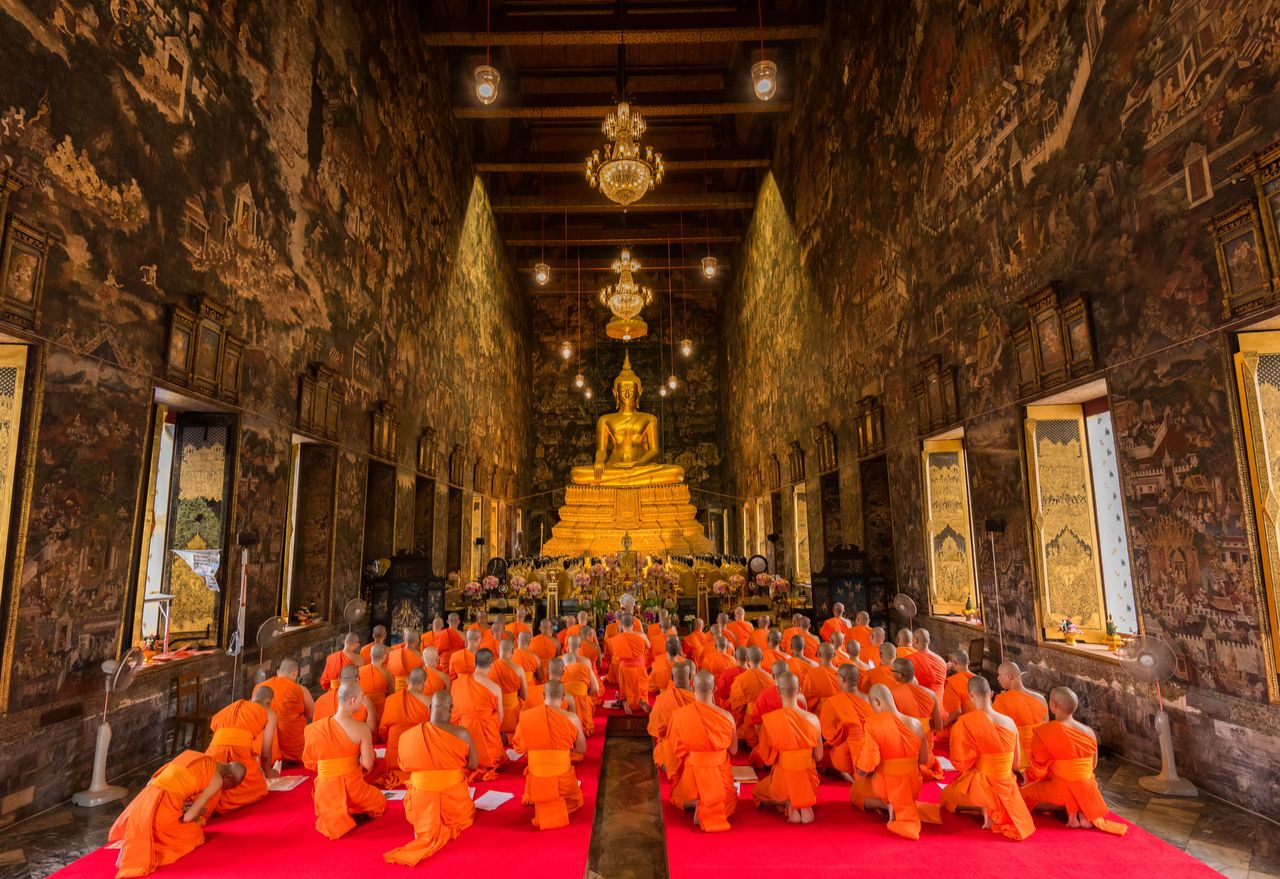 Vesak Day — Vesak Day, which celebrates Buddha’s birth, death, and enlightenment, is the most sacred religious holiday in Thailand. Since 90 percent of people living in Thailand are Buddhist, celebrations take place at temples throughout the city, making it a fascinating time to be in Bangkok. The ceremonies start at sunrise, with worshippers gathering to sing sacred songs and continue throughout the day with devotees praying at the temples and giving offerings. By evening, the altars overflow with candles, fruit, and flowers. The highlight takes place after dark, as monks and worshippers light candles and parade around the main temples. Thai temples are always open to non-Buddhists, and everyone is welcome to attend events on Vesak Day — just remember to dress modestly and be respectful. 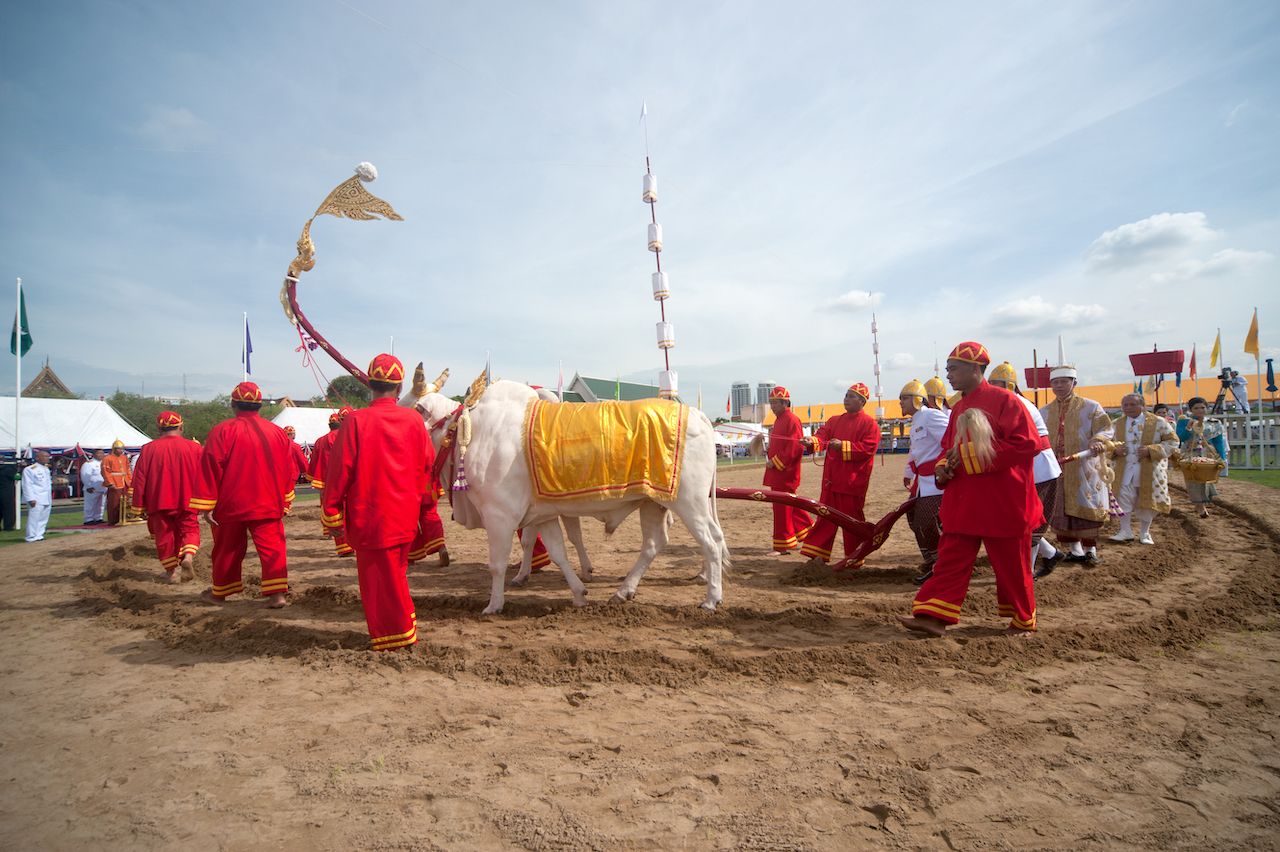 The Royal Ploughing Ceremony — The vibrant Royal Ploughing Ceremony is held each year at the start of the rainy season to bless the crops before the rice planting season. The ceremony takes place at Sanam Luang, a large field across from the Grand Palace. During the festivities, the Thai monarch prays with attendees for a successful harvest, and two sacred oxen plow the ceremonial grounds while farmers in traditional clothes plant rice seeds. Afterward, spectators rush to collect the seeds sown during the ceremony to replant with their harvests to bring good luck. 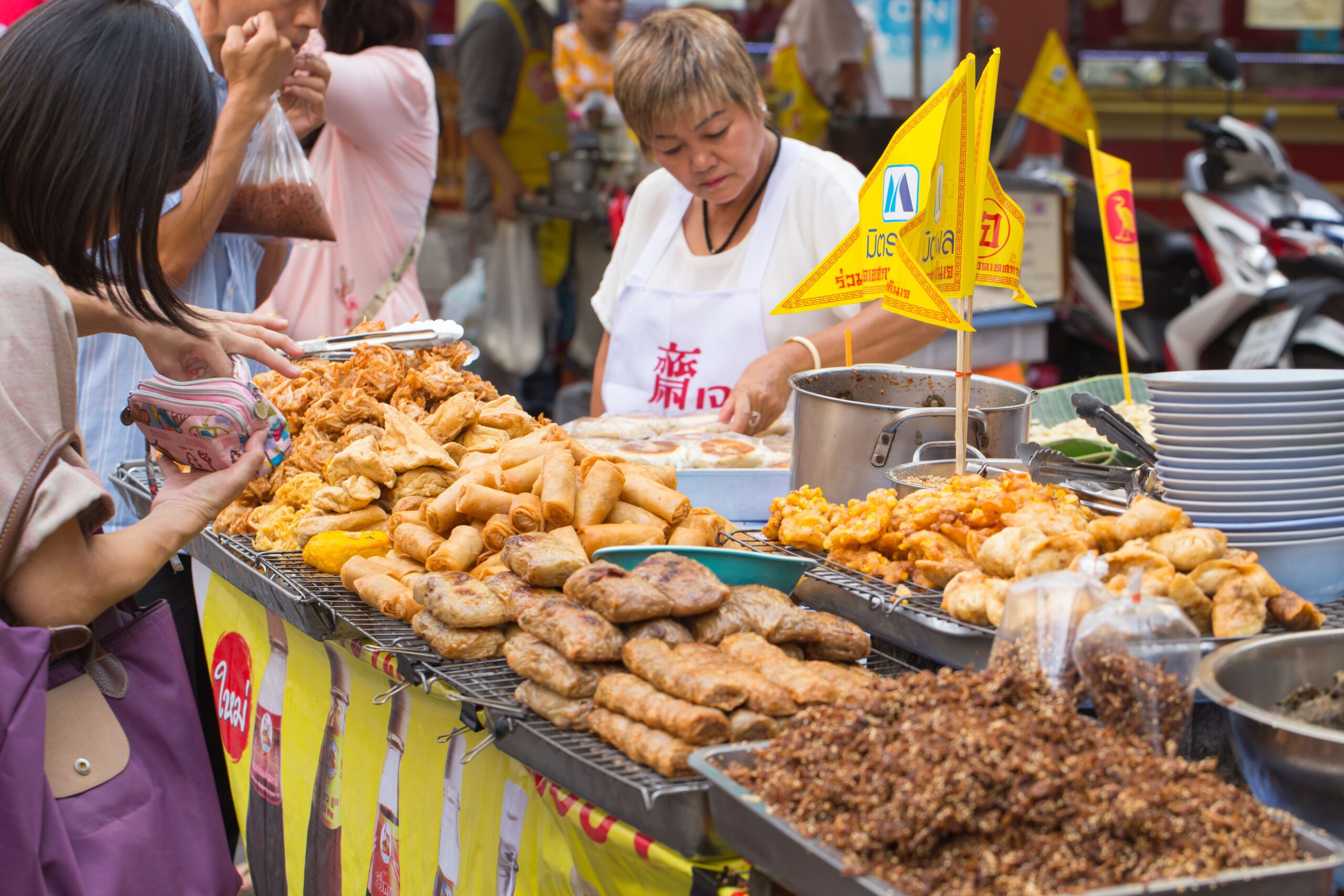 The Vegetarian Festival — The Vegetarian Festival is a holiday to honor the nine emperor gods. The holiday stems from the mid-1800s when a Chinese opera troupe fell ill from malaria while traveling in Thailand. The troupe prayed to the nine emperor gods and recovered miraculously. Today, devotees abstain from meat, poultry, fish, eggs, milk, and aromatics like garlic, onion, and chives during the nine-day festival to purify the body for prayers and giving thanks. During the festival, participating restaurants and street food vendors display yellow flags with the word “jay” (เจ) written in red to indicate they are serving a special vegetarian menu. Although the events center around Chinatown, temples, markets, and shopping malls throughout the city host vegetarian events that even the most committed carnivore will enjoy. 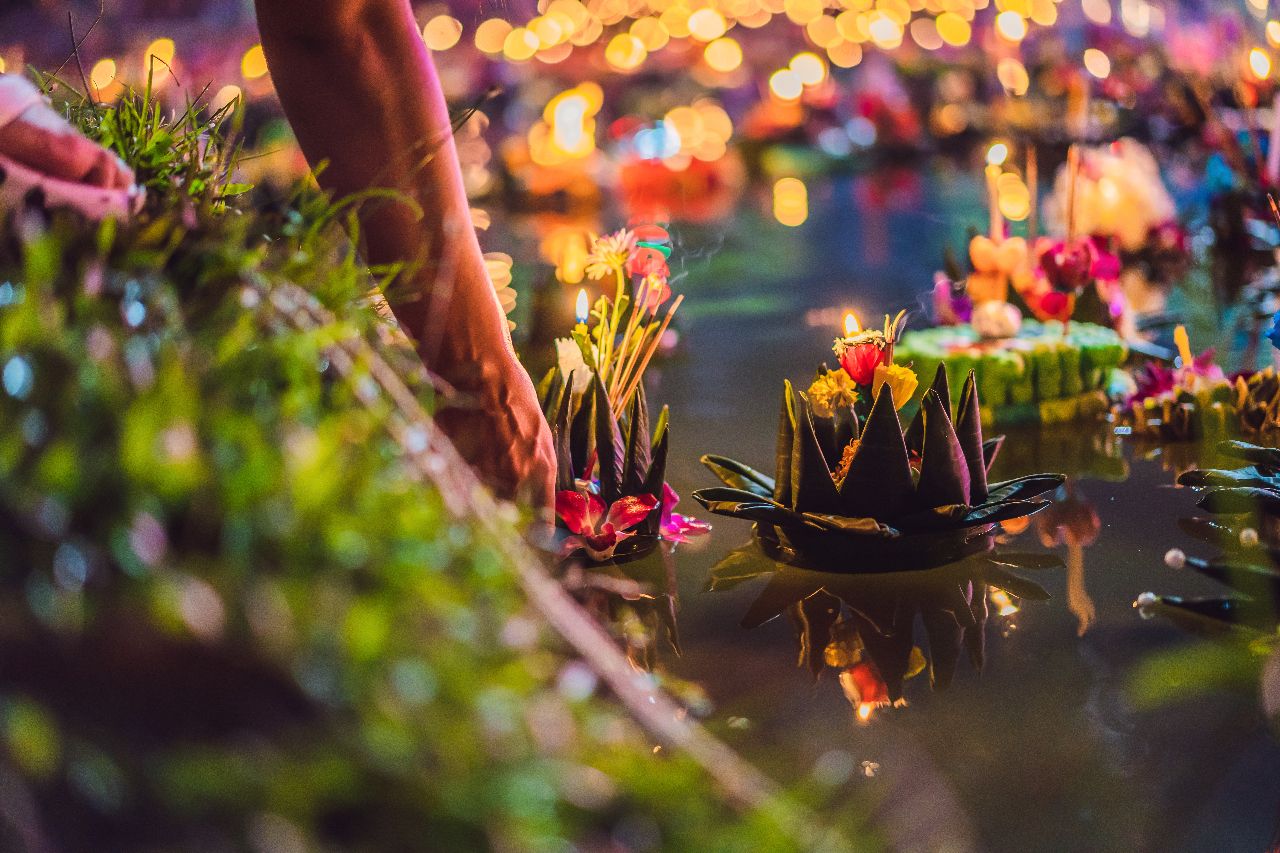 Loy Krathong — Loy Krathong is a Siamese festival, celebrated throughout Thailand and neighboring countries, and is Bangkok’s most atmospheric and photogenic holiday. On the 12th full moon of the lunar calendar, Thai people make little boats adorned with candles, incense, flowers, and offerings and set them adrift while saying a prayer. As the illuminated boat floats away, it symbolically takes away worries and sin. Celebrations with food stalls, dancing, and music take place at riverside malls, lakeside parks, and floating markets throughout the city. 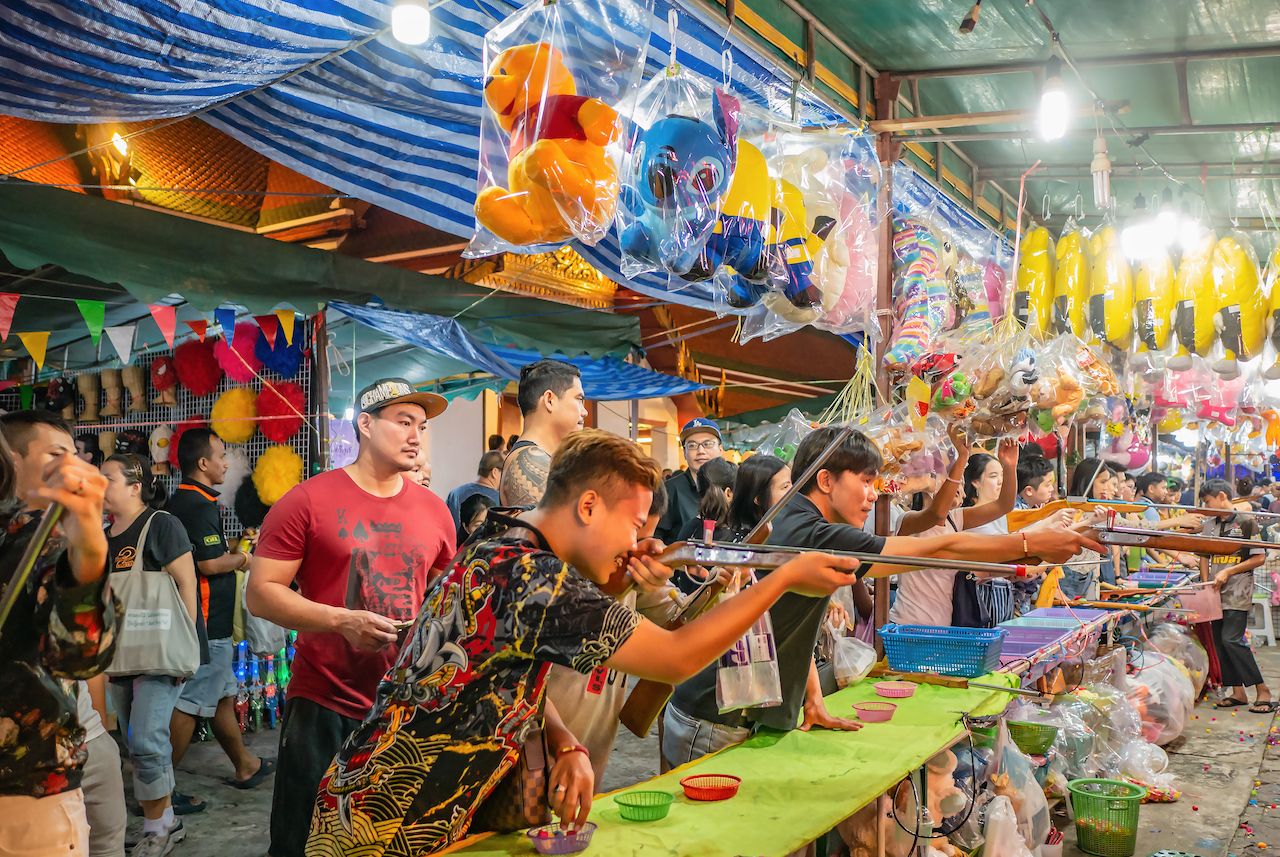 Wat Saket Temple Fair — Each November, Wak Saket hosts a 10-day temple fair, which is a chance to enjoy old-fashioned fun in the modern city. The temple fair comes alive each evening with carnival games, a haunted house, dunking booths, and rides like a carousel and Ferris wheel. Adding to the carnival-like atmosphere are rows of food stalls serving everything from fried insects to coconut ice cream.

The opening ceremony of the fair includes a colorful parade in which worshippers walk through the streets with a long red sash, climb to the top of Wat Saket, and wrap the sash around the golden stupa. The fair reaches its apex on Loy Krathong when Buddhists ascend the hilltop temple en masse to pray and give offerings and set candle-lit boats adrift on the canal.