SAN FRANCISCO is surrounded by water on three sides, so it’s no surprise that many of San Francisco’s most popular dishes come from the sea. But beyond seafood, restaurants in the City by the Bay also serve up world-famous burritos and a decadent ice cream sundae that should be at the top of everyone’s must-try list.

These are some of the most famous San Francisco foods to try when you visit, as well as the best restaurants and shops to try them at. 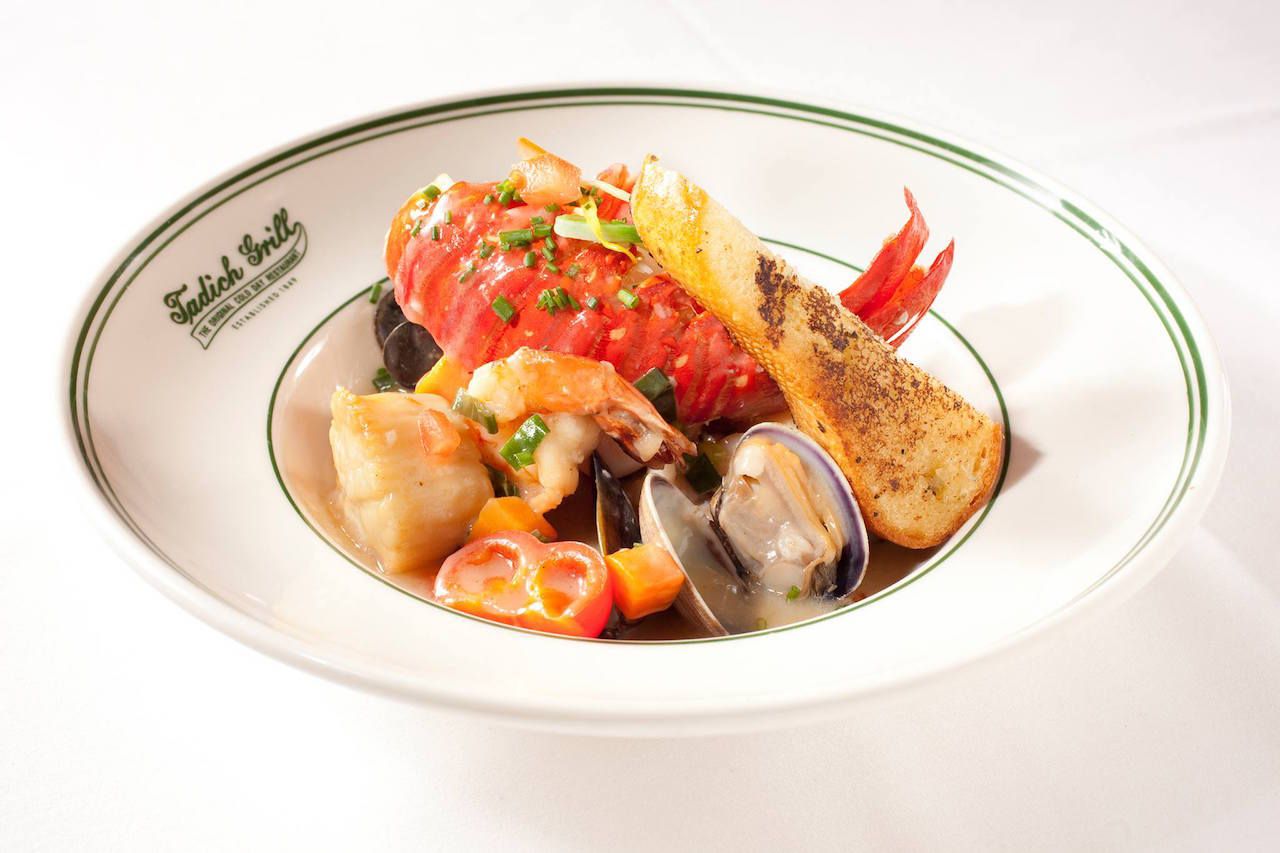 Cioppino is an Italian-American dish similar to the French Mediterranean soup bouillabaisse. This seafood stew takes an everything-but-the-kitchen-sink approach with a simple recipe first created in San Francisco. It includes a medley of seafood. Depending on where you get it and when, it may include clams, mussels, Dungenous crab, squid, shrimp, or cuts of a hearty and thick fleshed fish like halibut— or all of the above, along with plenty garic, onion, and herbs. The soup base is made with white wine and tomato. Legend has it that Italian fishermen who migrated to San Francisco would pool their resources after a day’s work and throw their leftover catch into a large communal pot. Today, the dish is typically served with wine (a local chardonnay goes perfectly with the dish) and sourdough bread.

Where to find the best Cioppino in San Francisco: Tadich Grill

Tadich Grill claims to be California’s oldest continuously running restaurant, and it’s located right in the Financial District. The cioppino at Tadich Grill features a generous offering of shelled prawns, crab, mussels, clams, and local seafood served with a side of garlic bread that is perfect with the hot broth. 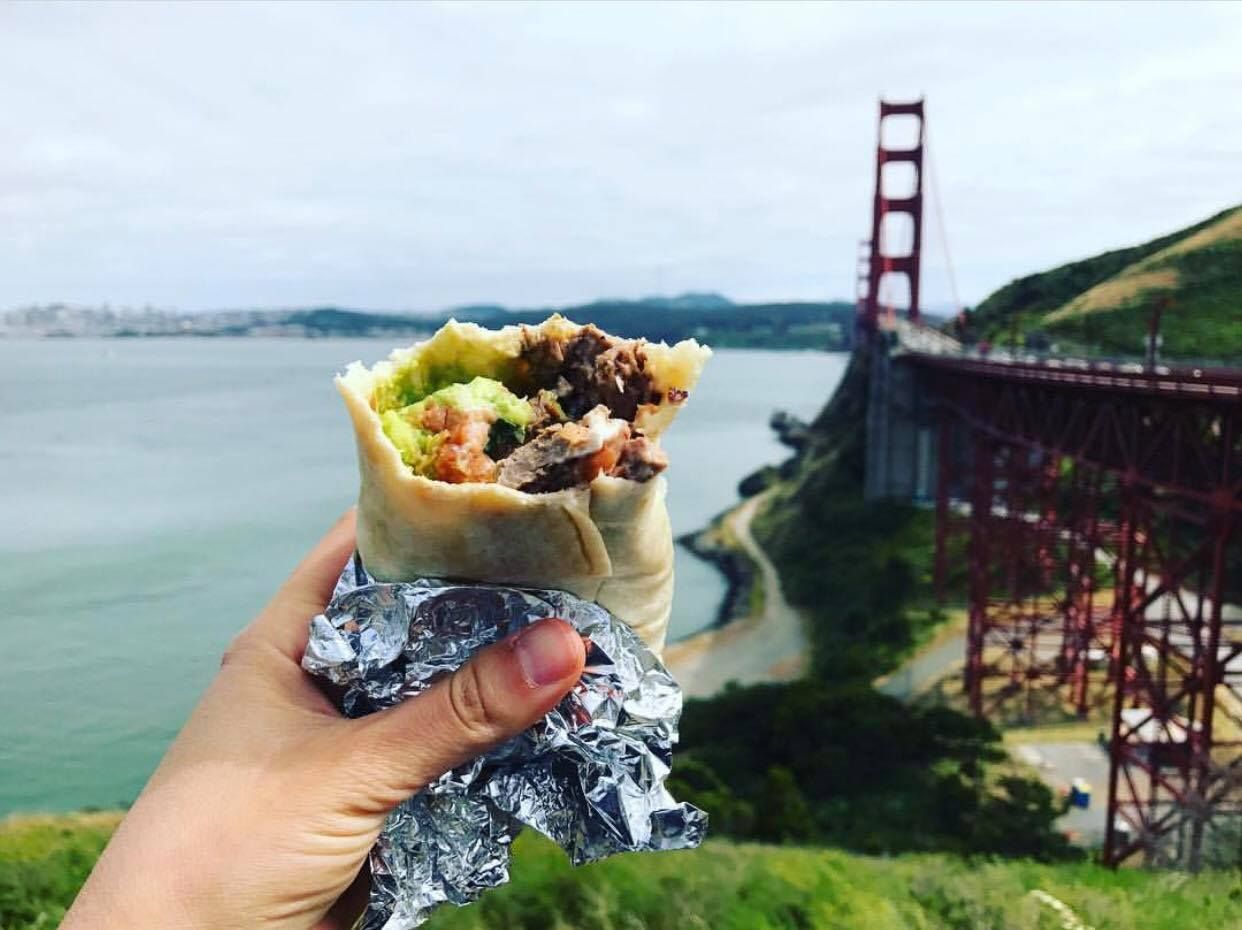 In the great burrito competition, San Francisco’s Mission burritos reign supreme. They are regularly named best in the world, and for a good reason. Flour tortillas are packed with rice, beans, meat and salsa, plus optional guacamole, sour cream, and cheese. Unlike the California burrito found in San Diego and other parts of Southern California, you won’t see any French fries in the mix in the Mission burrito. According to Bon Appetit, two places claim to have invented the Mission burrito (which is also sometimes called the San Francisco burrito or the Mission-style burrito): Taqueria La Cumbre and El Faro. Both date the creation of the Mission burrito back to the 1960s, and over-stuffed burritos have reigned in the city ever since.

Where to find the best Mission-style burrito: La Taqueria

A Mission District staple for more than 40 years, La Taqueria takes a somewhat unique approach to its burritos — owner Miguel Jara opts for no rice with his recipe. Instead, diners will find a freshly steamed flour tortilla packed with a larger serving of grilled meat, beans, salsa and other ingredients before the burrito is lightly grilled and served hot counter-side. 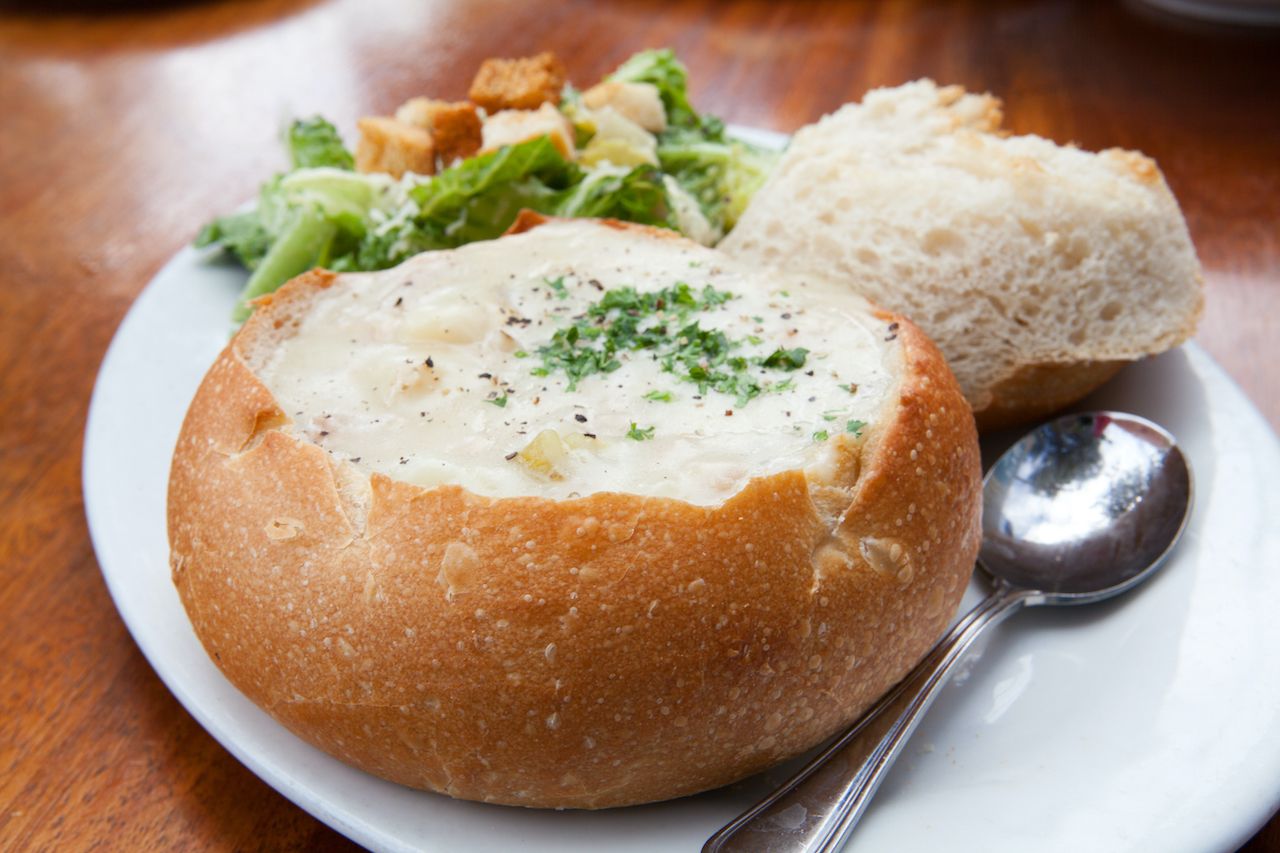 A steaming serving of chunky New England-style chowder is dished up in a bowl crafted from San Francisco’s world-famous sourdough bread for a combination that fits perfectly in the city’s foggy waterfront ambience. Clam chowder San Francisco style is different than the bowls you’ll find on the East Coast primarily because of that sourdough bread bowl. There are many places that serve the dish, and it’s easy to wonder who has the best clam chowder in San Francisco — especially if you’re looking to buy clam chowder on Fisherman’s Wharf. And while you’ll surely be satisfied with many of the bowls on offer, there’s only one that can be named best of the best.

Where to find the best Clam chowder in a sourdough bread bowl: Boudin Bistro

Boudin Bistro is located on the waterfront and has been open since 1849. The chowder at this San Francisco institution is great, but it’s the bread bowl that really makes this dish stand out. Made fresh at Boudin’s flagship bakery, the circular sourdough loaf-turned-bowl soaks up the chowder while you eat, leaving a few bites of doughy goodness as the vessel becomes part of the meal. Dip the accompanying piece of bread from the hollowed loaf to get the most out of your meal.

Now known around the world for its fine chocolates, Ghirardelli (pronounced geer-ar-delly) started in San Francisco in 1852 as a confectionery shop called Ghirardely & Girard. The chocolate company that is known and loved today has a location that’s walking distance from Fisherman’s Wharf in what’s known as Ghirardelli Square on Pier 39 — one of the reasons why San Francisco is one of the most famous cities for chocolate in the world.

Ghirardelli’s handmade hot fudge makes all the difference with this classic recipe. Sundaes are layered with two scoops of vanilla ice cream, handmade hot fudge, diced almonds, and a cherry on top to create a sensuous pairing of hot and cold, thick and creamy.

Dungeness crab is a Pacific crab with a harvest season that starts in late-November. Demand peaks during the holiday season, but you can find it almost every day at Swan Oyster Depot. The crab gets its name from the Dungeness Spit on the Straits of Juan de Fuca, which is a strait that serves as the border between the United States and Canada. Many Dungeness are harvested locally, though it’s illegal to catch them for yourself in San Francisco Bay and San Pablo Bay.

The crabs have smaller legs than Alaskan king or snow crabs, but there’s plenty of good meat throughout the crab (especially in the body). Still, you’ll have to work for your meal, pulling meat from cracked legs and chambers within the crab’s body. The payoff is well worth the labor.

Where to find the best Dungeness crab: Swan Oyster Depot

Avoid the tourist trap crab stands at Fisherman’s Wharf and grab a spot in line at a local institution. This no-frills foodie destination always has a crowd (including regular stops by celeb chefs) waiting for a seat at the seafood bar. Once you grab a stool, go for the cracked crab and an Anchor Steam beer. Enjoy the banter as a crew of gregarious apron-clad fishmongers works its way through a non-stop procession of fresh seafood orders.

A version of this article was previously published on July 19, 2017, and was updated on November 30, 2020, with more information.