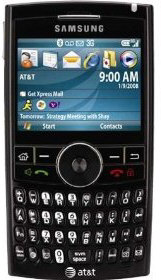 Let’s get a few details and disclaimers out of the way:

(1) I am not the kind of person who rushes out to acquire the latest cell phone.

(2) I disabled text messaging on my own cell phone because I don’t know how to text and because I never remember to use the key lock before tossing my phone in my bag…thereby resulting in charges for messages I’ve never sent.

(3) I have had Cingular—now AT&T—for at least five years… and have never been particularly impressed by the company’s service.

Still, I seized the opportunity to use the Samsung BlackJack with AT&T service free for 30 days.

Having seen advertisements boasting that it permits users to call to and from “more than 200 countries,” I was interested in testing the company’s claim during a trip that would take me from New York City to Mexico City and from Mexico City to rural Colombia.

How many people could I call in 30 days and in how many countries?

And more importantly: How would the call quality stack up against my own basic, no frills cell? My husband, friends, and I all put the Samsung-AT&T partnership to the test in three countries.

PC World reviewed the same phone in the test area of San Francisco and surrounding suburbs and reported that “Signal strength and data performance varied quite a bit.” The same held true in my experiences testing the phone and its service in Mexico City.

Calling New York on multiple occasions, the call would fail to connect, would disconnect, or—on more than one occasion—would connect me to someone whose number I’d never dialed. When calls did connect, the quality was highly variable, pleasantly crisp and completely audible at times, while robotically electronic and cryptic at other times.

Considering that the phone’s key selling point is its intercontinental usability, I was dubious about its ability to perform any better once I arrived in Colombia. Curiously, though, call connectivity and quality seemed to improve. Calls from Colombia to the United States and Germany were passable, particularly in light of the fact that we were far from a major city.

A perk of the phone—and one which was particularly appreciated in rural Colombia—is its high speed Internet access. For the most part, the ability to access websites and to interact with them as I would on my laptop was pretty impressive. While the phone’s keyboard could be more navigable, AT&T’s service excels with respect to the Internet capabilities on this phone.

This phone is a crap shoot. At upwards of $300 (for the phone; the service plan is another matter entirely), I’m not convinced this phone is worth the considerable investment, particularly since its performance is so uneven.

Still, the idea of a phone which offers service to call to and from most of the countries in the world while on the road is a promising enticement for frequent and long-term travelers. I’m definitely willing to revise my judgment on this BlackJack-AT&T partnership as it enters its next generation.

AirFly Pro Is the Best $50 I’ve Ever Spent on a Travel Accessory
Tortuga Setout 45L Is the Best Travel Backpack for Your Money
How To Travel With a Carry-On Only, According To a Professional Packer
This Travel-Approved COVID Test Is Still One of the Most Helpful Things To Pack Before Going Abroad
We Put the ‘Shark Tank’-Famous Beach Chair To the Test and Found Our New Favorite Summer Seat