KC Ortiz is a freelance photojournalist based in Bangkok, Thailand, where he covers under-reported issues, conflicts, and their consequences. 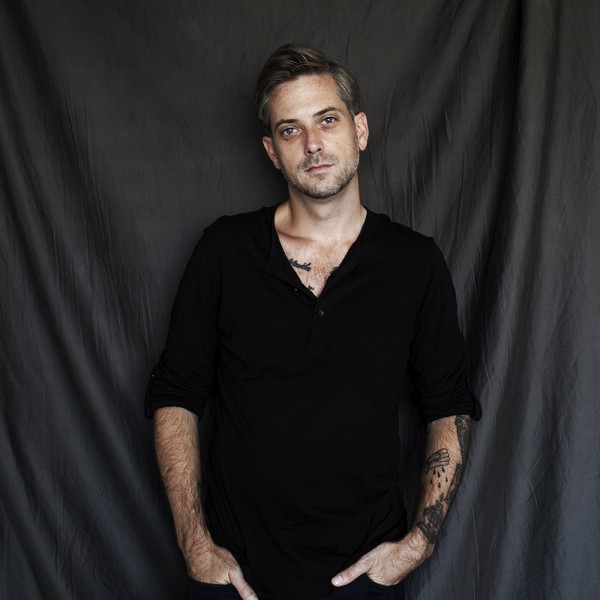 His work has appeared in Global Post, Juxtapoz, Newsweek, Time, and many other publications.

Ortiz’s most recent assignments have brought him to Burma, Cambodia, and throughout Thailand, covering aspects of life from politicians to prison fights. In 2013, he began shooting a long-term project on the insurgency in Thailand’s restive Deep South. 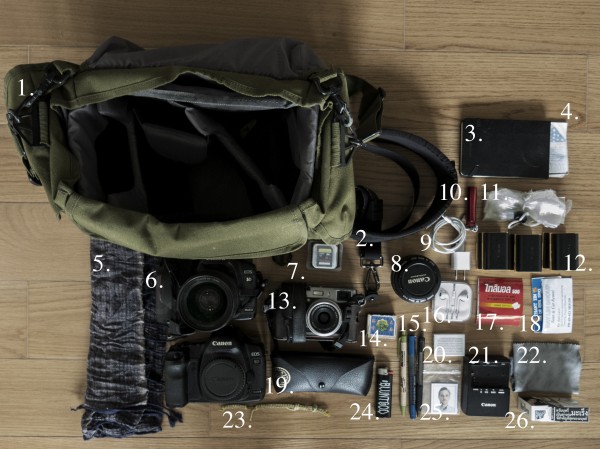 1. Think Tank shoulder camera bag – This is the bag I use for every project, every day. I keep a light setup wherever I go, whether the jungle or on the streets. I prefer a shoulder bag because of the sizing, dexterity, comfort, and security. My larger bags are all Think Tank as well, but I only use them for transportation and not in the field.

2. Black Rapid camera strap – Convenient for a double camera setup and a nice strap in general. (Disclaimer: Black Rapid has supplied me with gear before.)

4. Passport copies – Much better then keeping the real thing on you.

5. Scarf – I know some wear it as a fashion statement or to look the part, but the reality is a scarf is an incomparable piece of fabric. It keeps you cool or warm and can be used as a pillow, cushion, tripod, bag, temporary gas mask, rag, towel, shade, sling, bandage, bug deterrent, and so the list goes on.

6. Canon 5D Mark II – The mostly reliable workhorse camera. I carry two bodies with me in the field. Attached to top camera is a Canon 35 1.4. lens. This is the lens I shoot 90% or more of my work with.

7. Memory cards – I always carry a bunch with me. I don’t shoot off an incredible amount of frames, but you never know how long you’ll be gone and it’s not fun running out of memory in the middle of a day. They weigh nothing and don’t take up any space, so why not load up on them?

8. Canon 50mm 1.8 – I may switch this out depending on the assignment and timeframe, but it’s almost always just one other lens with me.

11. Camera wet bag – A good solution that takes up no room and will get you through a sudden rain a bit smoother than a plastic bag.

12. Batteries – Lots of batteries for me. Maybe there’s no electricity, maybe shit gets wet, maybe a million things, but it’s always a must to be prepared. It’s a plus to be a step ahead of bad situations.

14. Matches – People tend to steal lighters but always give matches back.

19. Sunglasses – I carry them around more then I use them.

21. Battery charger – Maybe there will be electricity?

23. Lucky charm – A bracelet given to me by a Buddhist monk named Rambo in Karen State, Burma, in 2010. Rambo told me it would protect me from bullets, and so far I haven’t been hit by any bullets. Seems legit to me, so I continue to carry it around.

26. Cigarettes – Half the job is waiting, and these come in handy. Even if you aren’t a smoker, I recommend a pack of cigarettes in your bag. They can come in handy out there and make you a new friend faster then anything else can.

(27.) I just ran out but I will usually also have a small roll of duct tape, which is another great multipurpose tool. First aid to automotive work, it can get the job done and is a necessity in my bag.

Tagged
Travel Myanmar Thailand Ambassadors
What did you think of this story?
Meh
Good
Awesome