With high hopes and mad anxiety I jetted off to Ireland two weeks ago to find my connection to the Emerald Isle. I knew whereabouts my Walsh family came from in the south of Ireland, and I was hoping to track down some distant relations.

Everything and nothing happened so fast.

Weeks and weeks of research and hundreds of dollars paid to a genealogist in Newfoundland culminated in a single name and a single date: Patrick Walsh, 1778, County Waterford. Over 200 years ago. And while I had the area of origin narrowed down to three places in the county, I was hoping I’d find some thread of relation to reunite me with my homeland.

On my first day in Waterford City, I met Mary and Eoghan, two folks from Waterford Gathering. They connected me with an archivist in Dungarvan, a researcher at St. Patrick’s Cathedral in Waterford City, and a lady named Evelyn Cody (nee Walsh) in Lismore who had just finished researching her family tree. Evelyn might have gotten me the closest to finding my people — her strawberry blonde hair and shocking blue eyes matched those of my own relatives with alarming accuracy.

I was interviewed by three newspapers, and a radio station in Dungarvan. I had filmmaker and MatadorU faculty Scott Sporleder following me on the quest, capturing the experience through his camera. I got stuck in a cow crossing on my way to meet Joe Walsh in Kilrossanty, who’s hosting his own Walsh gathering in June. (Later, his father Mick added me to Facebook to chat about my journey and how much I reminded him of his nieces.) Inspired by Joe’s initiative, I invited the Walsh folks of Dungarvan to come out to The Local pub to say hi and share a pint. And then I sat there for hours, anticipating anything and receiving nothing.

By the time I rolled out of Waterford for good, I felt like I had failed my first real journalistic mission. The first story that meant the world to me, the first where the research consumed my life for months. I worried I had strung people along on a hopeless mission, and in hindsight, all the work I had done just seemed pathetic. No other word summarizes how I felt better than that one: pathetic. I felt hurt, and embarrassed that people like Scott and Mary and Eoghan were there to witness it all.

But here’s what did happen. 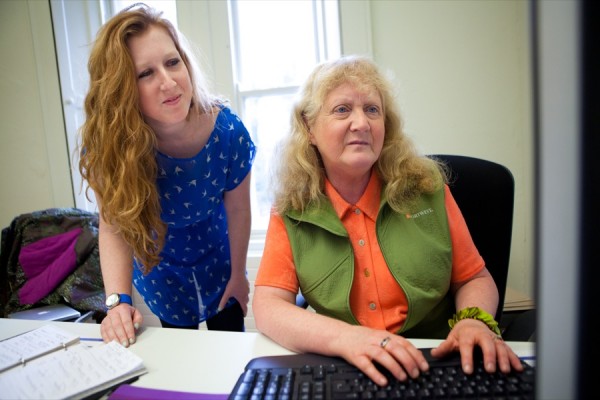 In the days I spent in Waterford, I poked my head into the smallest of communities in Ireland, places where I never would have ventured if I weren’t doing this research. At The Local, I met Paula Houlihan and her two sons, who live in a purely Irish-speaking village. She’s an ambassador between Newfoundland and Ireland, and she often brings people to and from each island. The three of them bought us pints and chattered well into the evening, introducing us to some of the finest Irish hospitality I had seen so far.

Another night at The Local, I sat next to an Irish trad session with some talented musicians who welcomed Scott and me as the only travellers in the bar. The owner — a famous bodhrán player by the name of Donnchadh Gough — bought me a Guinness and told me about his time touring my province.

I found myself sitting on the edge of red cliffs along the Copper Coast while brilliant sunshine lit up white beaches and green fields. On the back roads of the countryside, we discovered the ruins of Dunhill Castle. We clambered up the high steps to the tower where crumbled remains of history looked out onto miles and miles of farmland, and we didn’t share the view with a single other person.

Dreary, overcast weather plagued us for most of the trip, but on those days when the sun broke through the clouds and touched the furthest corners of the coast, I could see Newfoundland everywhere. In the rocky creeks snaking their way to the ocean, in the green hillsides and the barren mountains dotted with sheep. When Ireland reveals herself, you understand why she’s the way she is. The Irish are a tough brood.

And I could hear Newfoundland in the dialects of Waterford, with their curious usage of “boy” (“b’y” back home) and Irish grammar like the word “after” in the most nonsensical places (“What’s after happenin’ now?”). In Galway, my Irish host Cathal answered the phone with, “How’s she cuttin’?” and I felt the tiniest twinge of homesickness.

All I can do now is “breathe the air.”

I smelled the familiar Atlantic Ocean rawness of seaweed and salt and oil on the Cliffs of Moher, and downed more than my fair share of boiled vegetables and slabs of salted meat, which are omnipresent on my own island. Tip: When you order “bacon” in Ireland, it’s really just thick slices of ham.

Almost immediately, I recognized the inevitable sense of comfortable alienation that occurs during travel. No matter the similarities, the Irish are Irish and I am Canadian.

Fortunately, it means the island has more surprises for me over the next couple of weeks. My happiest moments so far were the unexpected types: zipping around the narrow roads of the Ring of Beara, accidentally getting lost above Connemara in a landscape that resembled Mars. At an unmarked lake, we paused to take photos of still waters against the mountains while workers burned brush in the background. When we got back into the car and rounded the corner, we saw a firetruck racing toward us, and laughed at the idea of us happily snapping photos while an unlucky worker panicked over burning down the landscape directly behind us. In a one-room pub reeking of urine in Ballina, I met a man who told me the world is flat. His companion behind him was making the international symbol for “cuckoo” with his index finger turning circles at his temple, and as we were leaving, he said: “Now you’ve seen a real Irish pub.”

I came to Ireland hoping to bridge that gap between the Emerald Isle and my own island, to know the place. But claiming I’ve done so would be selfish, as there’s so much I can never know. Here, the undertone of unrest and struggle permeates even the greatest Irish craic. Cathal has declared his household Irish-only, where English is the second language because “we’re meant to be speaking Irish.” In the bathroom stalls of Tigh Neachtains pub in Galway, graffiti proclaiming freedom from the EU adorns the walls.

I’ll never really know where my family’s story began. As I was told while searching for my dear distant Patrick Walsh, all I can do now is “breathe the air.” This story is real and painful and it starts somewhere.

[Editor’s note: This trip was sponsored by Tourism Ireland.]

Tagged
Narrative Ireland
What did you think of this story?
Meh
Good
Awesome