* All photos by the author

Traditions still stand strong in Myanmar’s countryside, which has so far been relatively untouched by the outside world. Myanmar is often seen as one of the world’s most isolated nations. Although the Burmese government has eased its 15 year restriction on tourism, the country maintains its ancient traditions. According to an International Religious Freedom Report published in 2011, Myanmar is one of the most religious countries in terms of the proportion of monks compared to the income spent on religion, with almost 90 percent of the population practicing Buddhism.

My photography project started because of my interest in documenting the genuine nature of the country’s identity. Myanmar is a nation whose character is shaped from the practice of Buddhist traditions and culture, and is sustained by the faith of its people. The project focuses on the social life of the monks, who respect Buddhist norms and consider a simple way life as the ultimate goal of living. 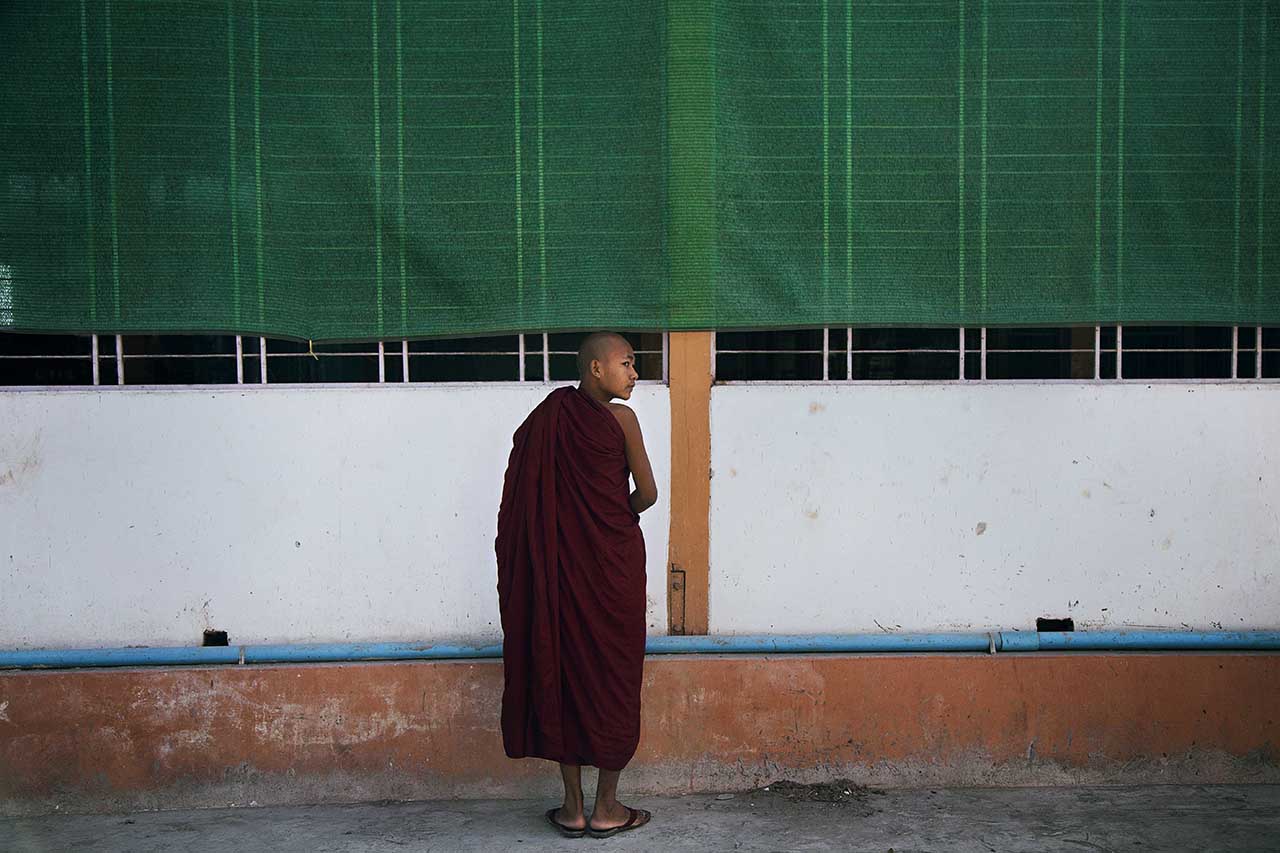 Stepping into Myanmar’s soul would not be complete without an understanding of the prevalence of Buddhist spirituality. In Myanmar, there are thousands of Buddhist monuments — temples, monasteries, and stupas (a dome shape structure that traditionally holds Buddhist relics). Most of the time, stupas are utilized as shrines. It has become a habit for Myanmarese to visit the temple on a daily basis and they believe that the act of offering will earn merit and karmic reward in Buddhist faith. 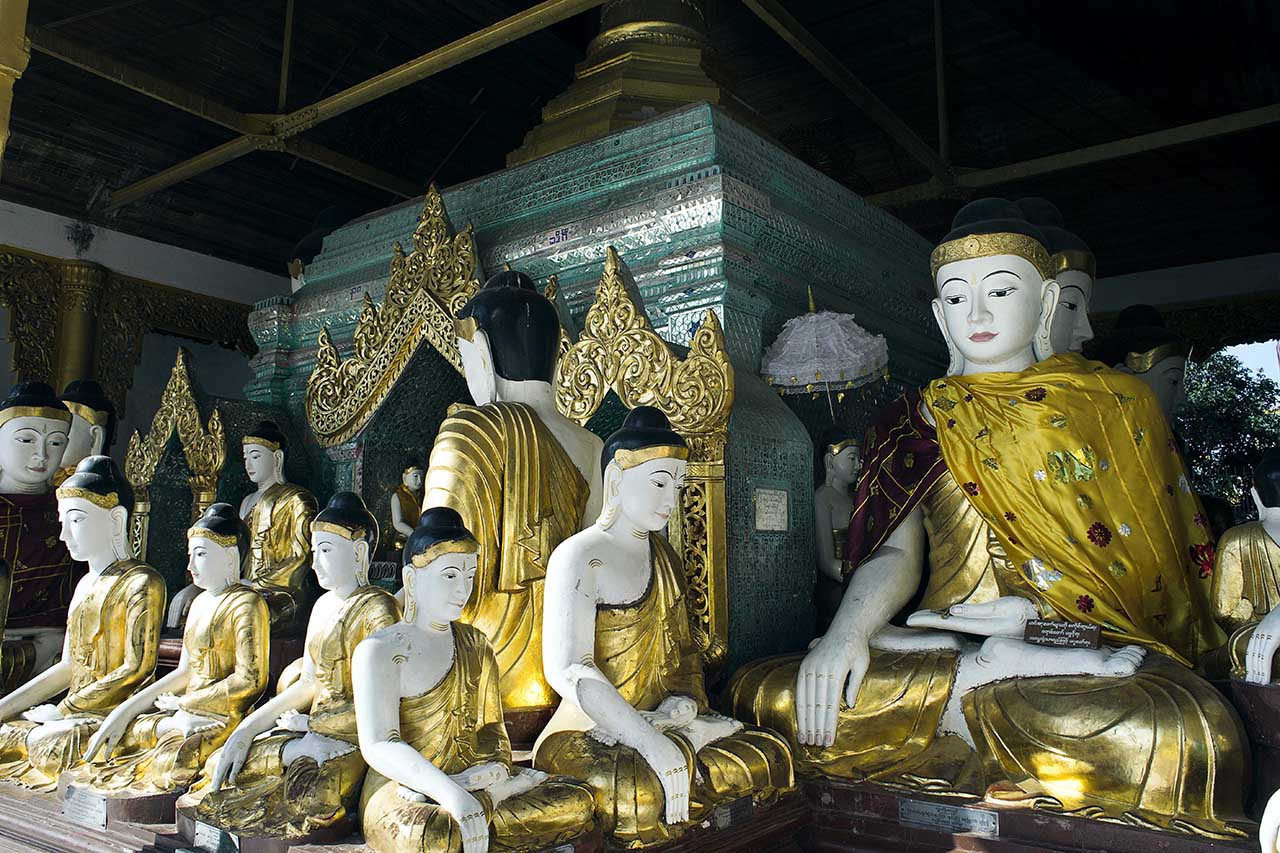 My journey started from Mandalay with a visit to the Mahagandayon Monastery, the biggest teaching monastery in Mandalay and a home for more than 1,000 monks who come to master the monastic way of life from all over the world. I have never seen so many monks gathered in one place. They marched at 11 pm, for their last meal of the day… lunch. Each monk held a alms-filled container that was collected every morning from the community. Giving alms to the monks is a ritual to express the practice of cultivating generosity in Buddhist tradition. 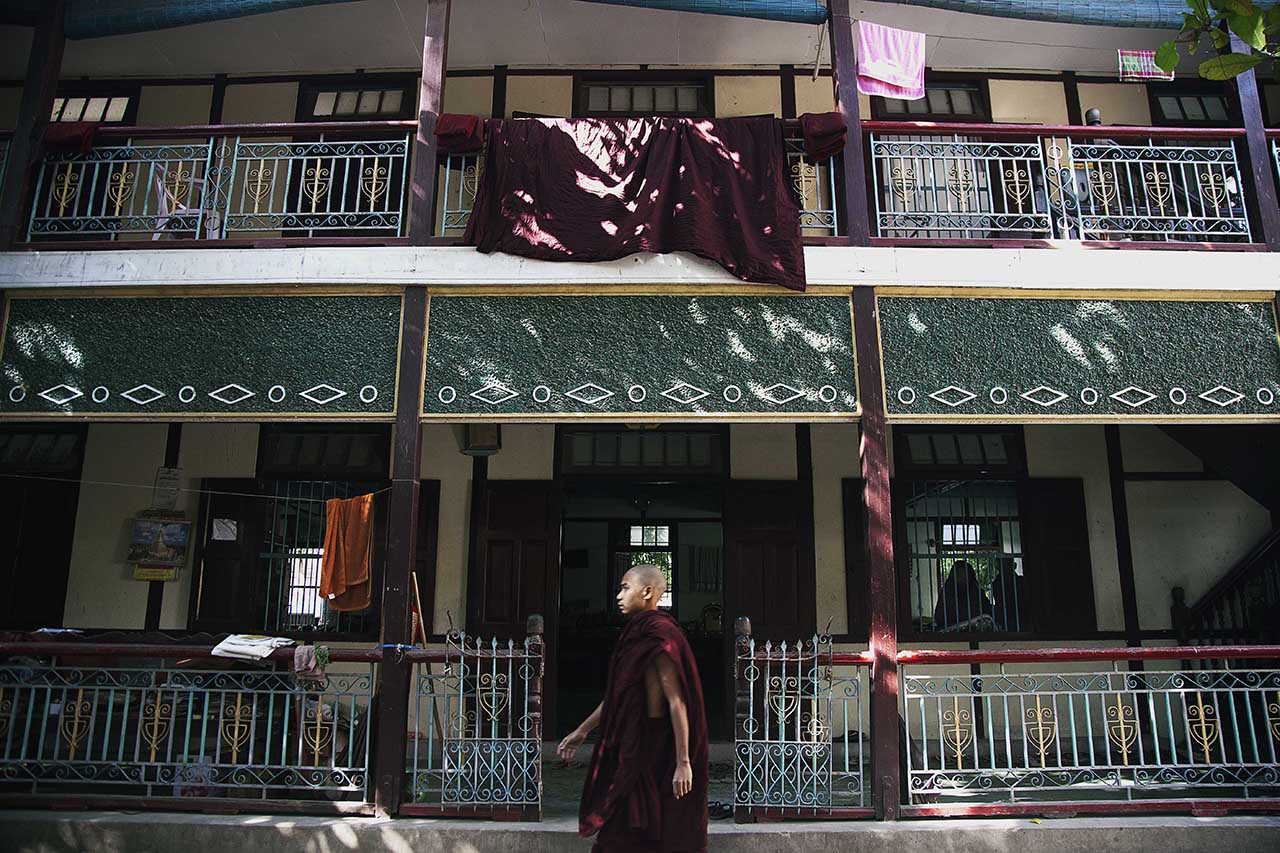 In Myanmar, monks are seen as the nation’s most important religious and civil institution. “It’s not easy to become a monk” said Ko Ye, my guide. They are obliged to pray every day, throughout the day, to honor the teachings of Buddha. Every Burmese male is expected to complete a temporary monastic residence twice in his life. He then has the choice to return to a normal life or stay in the monastery. “But,” Ko Ye told us, “if you have a family member who become monk, it’s an incomparable honor.”

For poorer families, joining a monastery is a way for their children to escape poverty, become educated, and gain access to an honorable position in society. The same 2011 report stated that there are more than 400,000 monks in Myanmar. No wonder their red robes, shoeless feet, and shaved heads are instantly recognizable in every corner of the country. 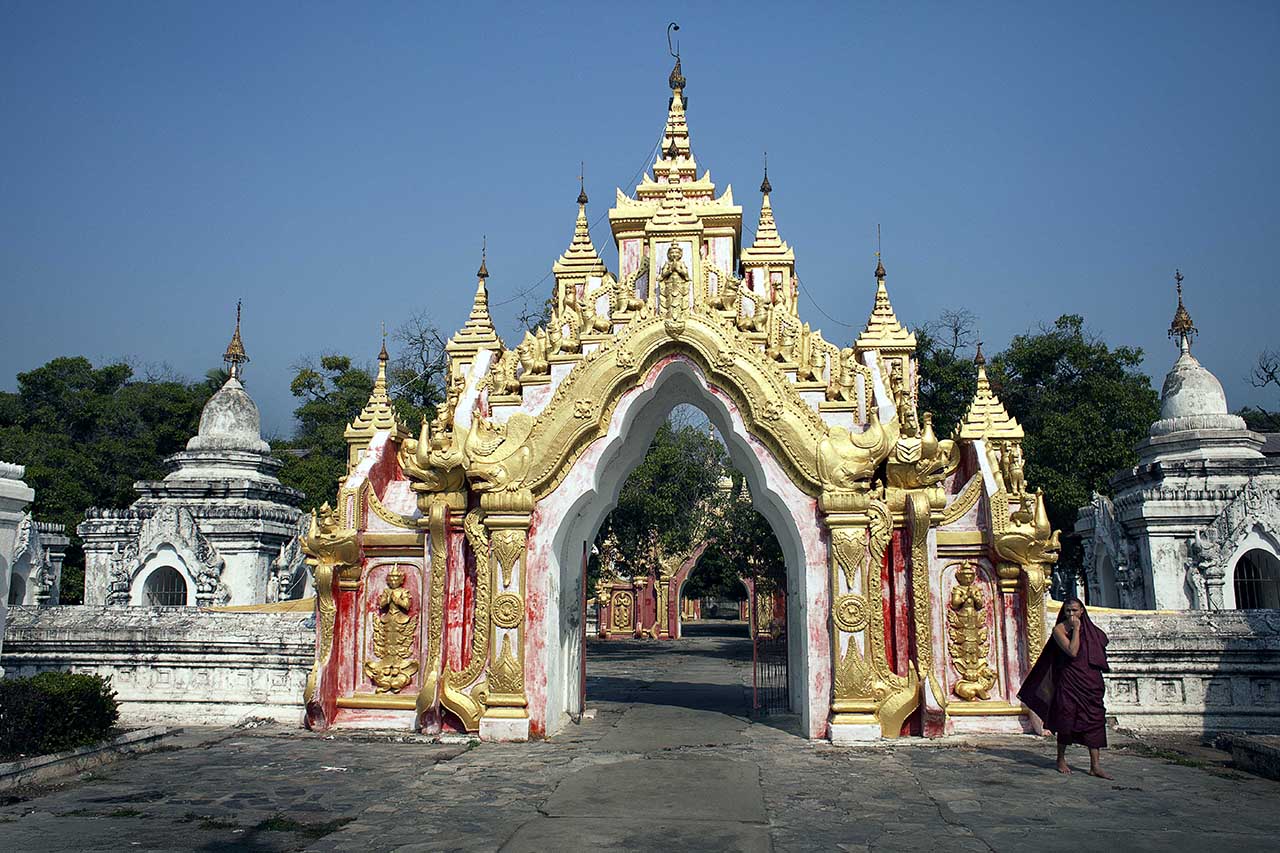 From Mahagandayon, I drove up north toward Mingun Pathodawgyi Pagoda, one of the biggest unfinished pagodas ever built. A giant rectangular-shape 50 meters tall with large cracks splitting the great construction in two is dominating the landscape of Sagaing Region. Local folklore describes that King Bodawpaya, the man who began the construction of this massive pagoda, believed he would die if construction of the pagoda was ever completed. So, it was left unfinished. It still stands today, at 50 meters tall, with large cracks running down the sides. 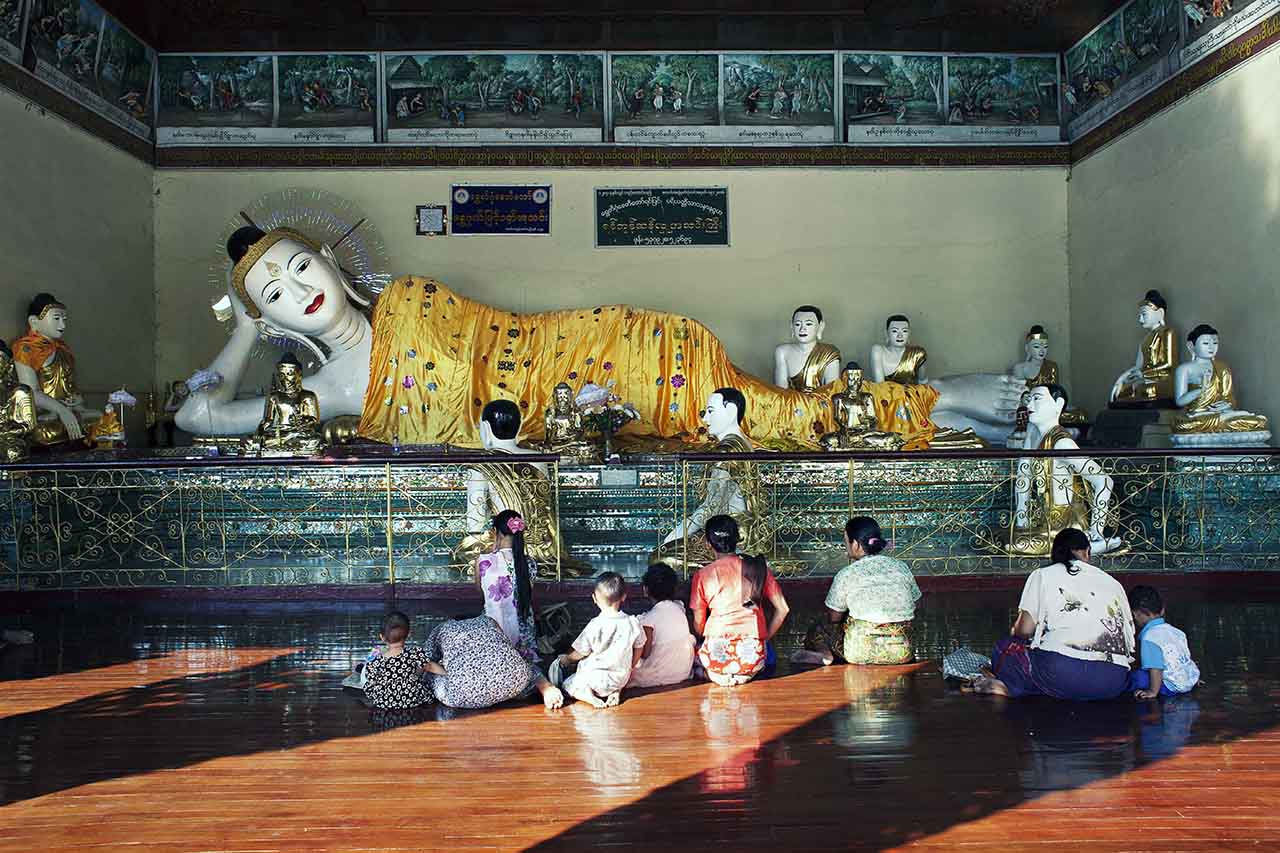 Leaving Mandalay behind, I continued my journey to Bagan, an ancient city home to more than 2,200 Buddhist monuments. Some of them are still fully-functional as temples and the rest are remnants of sheer antiquity. The Ananda, Thatbyinyu, Dhammayangyi, and Swezigon temples are just a small number of these artistic masterpieces and emblems of Burmese culture. The entire Bagan Archeological area and monuments is simply breathtaking and majestic. 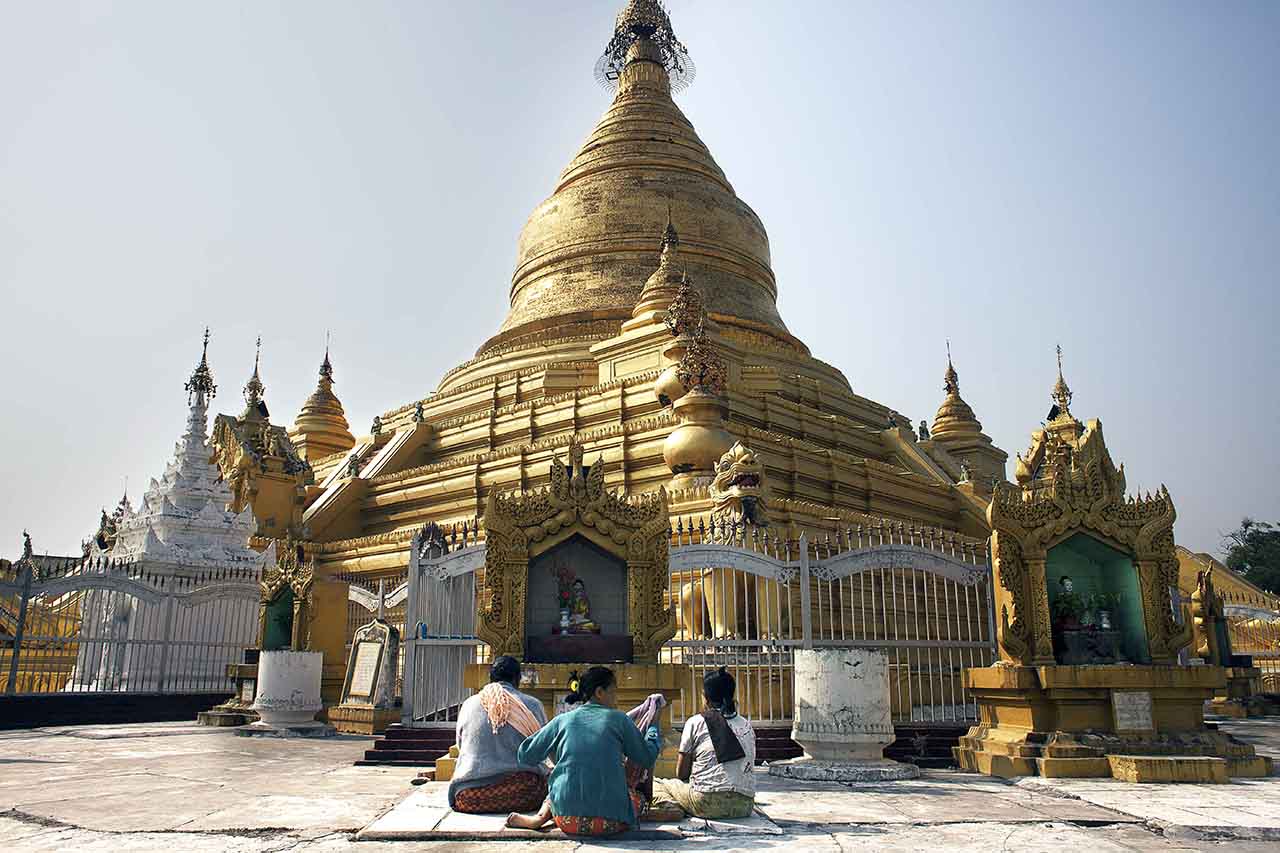 Yangon was my last stop. The former capital city of Myanmar is a hometown to the famous Shwedagon Pagoda, which has become the nation’s proudest symbol. A golden-gilded stupa reaching 110 meters tall, the Shwedagon Pagoda is a site of pilgrimage for Buddhist devotees and is known as the most sacred pagoda in Myanmar. It is believed that this pagoda contains some of Buddhist holiest relics such as Gautama ( Buddha’s hair strands).

Although the tourism industry has rapidly increased, the traditions of Buddhism are still upheld in everyday life in Myanmar. A simple way of life in line with Buddhist values remains the ultimate goal, and religious monuments labeled as an attribute of the county’s proudest symbol. Myanmar is place where myth, history, and religion combine in synchronized harmony, creating a culture distinct from the rest of the world.

GalleriesCheck Out These Stunning Portraits of Myanmar’s People and Culture
Tagged
Culture Religion Myanmar
What did you think of this story?
Meh
Good
Awesome