I AM WRITING THIS on breaks between bathroom visits.

Having an iron stomach (a lifelong claim that I have now rescinded), I thought it would be funny to find five of the worst-rated Yelp restaurants to see if the outspoken people of the Internet were fair in their judgments. For those unfamiliar with Yelp (is anyone in SF unfamiliar with Yelp?!), it’s a website/app that lets diners and patrons rate and comment on the quality of the businesses they visit. I often use Yelp to choose restaurants, but I think most commentators on it are whiners with too much time on their hands.

Starting out, I quickly discovered that there is no way to sort restaurants by lowest rating (a flaw or on purpose?), so I used search keywords such as “worst,” “food poisoning,” and “gross” to find restaurants that had a one- to two-star rating (and that were still in business). I learned that it’s not possible to give zero stars, so one is the lowest rating possible. Note to Yelp: some places deserve less than one star.

In a city full of amazing food, it was harder to find duds than I thought. But I found five restaurants that failed to please and headed out with low expectations and a full bottle of Pepto-Bismol. (I made it to only four.)

There’s been many a night when I’ve dragged my brave and strong-stomached friends out to eat risky food. But this time, none of them accepted the invitation. I am grateful they didn’t come along.

I am now on day 3 of not eating, but somehow there are still things left in my body to spew out. It was shitty timing — pun intended. We were out of toilet paper in our house. I’ve been fighting food poisoning using paper towels to wipe. 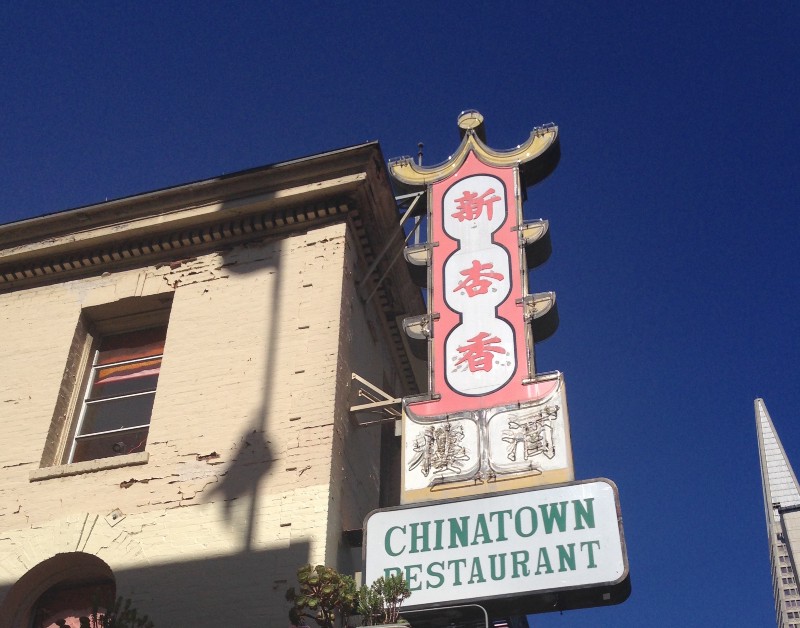 Chinatown Restaurant is exactly where you think it is. And it serves exactly what you think it does. A self-proclaimed “landmark since 1919,” the restaurant is hated on Yelp for two main reasons: the food and the service. More specifically, for shady gratuity practices and bill additions.

I ordered the dim sum, which, they advertised proudly (“proudly” meaning the descriptions include an exclamation point), is served all day(!). I was just one person, and it was light. I’d eaten both of these dishes (shrimp noodle roll and Shanghai soup dumplings) a million times, so it would be easy to review. 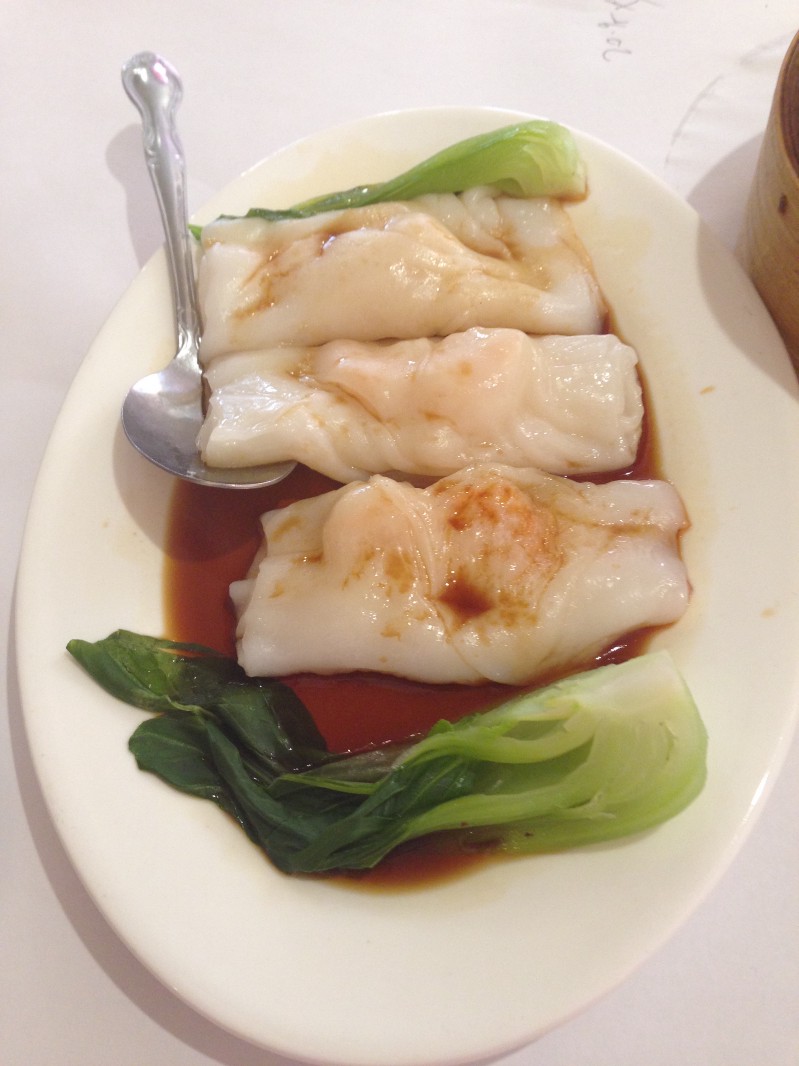 The soup dumplings were fine. I’m lucky enough to live next to two great SF spots that serve this dish and am spoiled. These were edible, though I was nervous to finish them.

I was almost won over at the end by a surprise free dessert — green-tea ice cream and a fortune cookie. It would have been a saving grace, had the ice cream actually tasted like green tea and not vanilla that was dyed green.

There were pigeons inside the restaurant — one hopping around on the floor and another flying around. The latter did a dramatic performance — a dinner-theater act of sorts — when it repeatedly ran into a window, much to the horror of the patrons. The servers didn’t seem to care and let the thing repeatedly ram itself into the glass while a diner tried to help the poor bird. I silently wondered if there’s a health-code violation for bird suicide near the kitchen.

After taking 30 minutes to arrive, the shrimp in my dim sum was shriveled and dry and weirdly tasted like a soft pretzel. The surrounding rice noodle was OK, but that’s hard to mess up. The first two bites were fine. The last was one was goopy, and I abandoned ship.

The service was much worse than the food. I did notice some customers in another room having to walk to ours to be served, and I had to get up to ask for a check, despite there being only a few people in the restaurant. My tip wasn’t added automatically, but they did try to cheat me on change, albeit only by coins. It took me about 20 minutes to pay.

“Would I go back? Not if I had any other option, but it would certainly be preferable to nibbling off a body part, if I were hungry enough.” 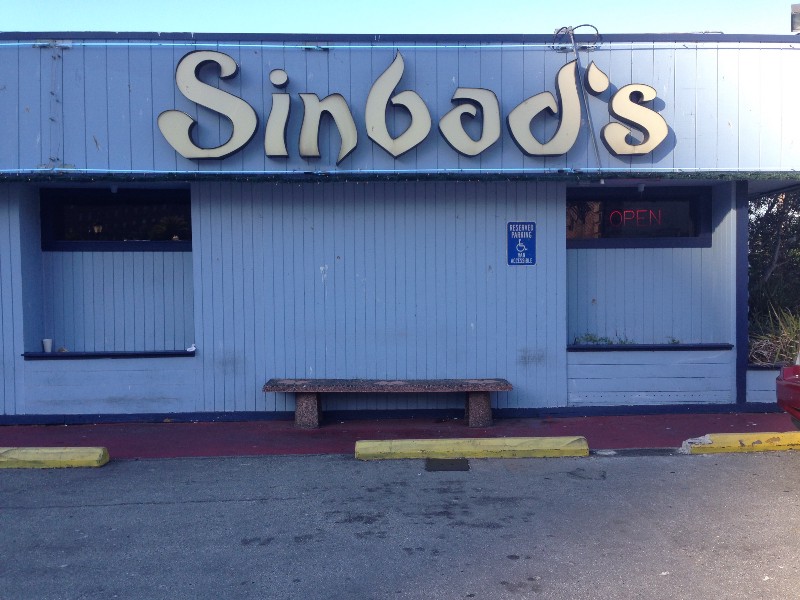 Sinbad’s is a seafood restaurant that seems to mostly attract tourists looking for a bay view. Anyone who has been down to the Ferry Building has likely seen this place a million times and wondered about it. I went around happy hour, and the deck was filled with people drinking beers and watching the traffic move slowly along the Bay Bridge. I was seated immediately at a booth meant for five to six people. I guess they weren’t expecting to fill up.

I tried to order the San Francisco crab cakes and asked what “San Francisco style” meant, but the waiter told me that I wouldn’t like them since I don’t live in SF. I thought about interrupting him to let him know that I do, in fact, live here, but he wouldn’t stop talking, and I didn’t care enough about crab cakes to interrupt.

So I ordered a Boston clam chowder (thinking that after five years in Boston, I would be worthy to judge the quality) and a shrimp cocktail (thinking it would be hard to mess that up). I was very wrong. 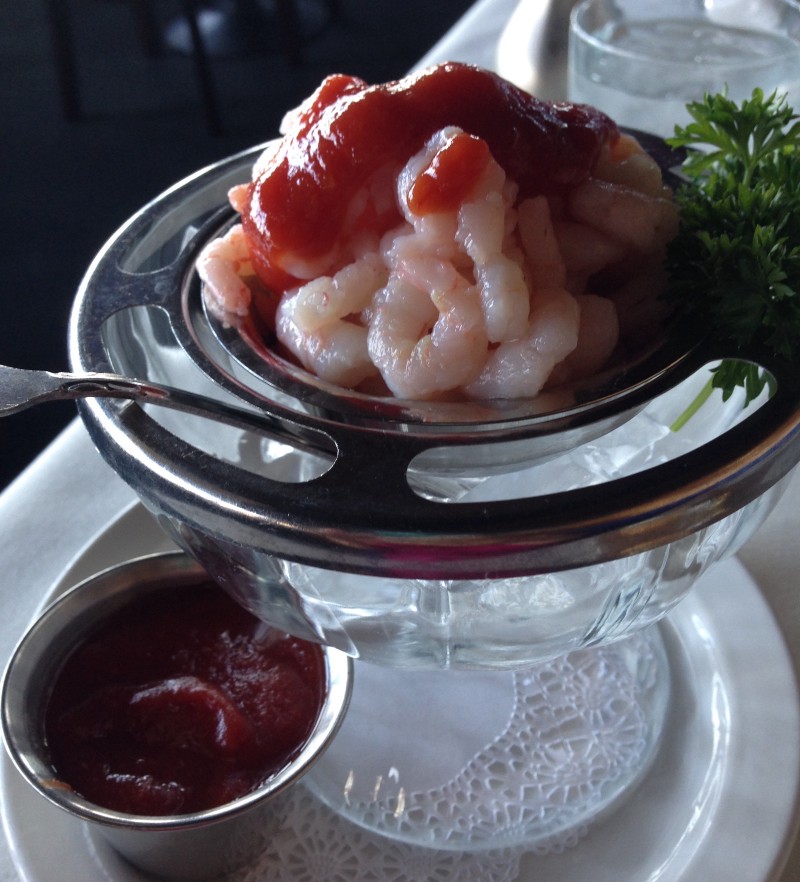 I asked if the clam chowder was made in-house. The waiter, offended, said, “Of course!” and pointed toward the water, as if being on the ocean guaranteed that everything was homemade. The soup ended up tasting goopy but fine, except for some sand. I wouldn’t bet money on the fact that it was homemade, but it was still sanitary.

Despite some reviews recounting food on the floor and unwelcoming staff, Sinbad’s was clean and inviting and didn’t have any weird smells.

The shrimp cocktail contained the smallest shrimp I’ve ever seen. Ever. I learned that the shrimp cocktail I was expecting was a little more expensive and called “prawn cocktail.” The odd-looking mini shrimp in my cup were mushy and not totally peeled. They had definitely been frozen and defrosted poorly. I could take only two bites.

When I complained, the waiter said, “Mushy? Huh.” And then he walked away. But he delivered my bill and didn’t charge me for the shrimp. He must have known what a disappointment this was.

“For a better meal, you could lick crumbs off the floor of the Ferry Building.” 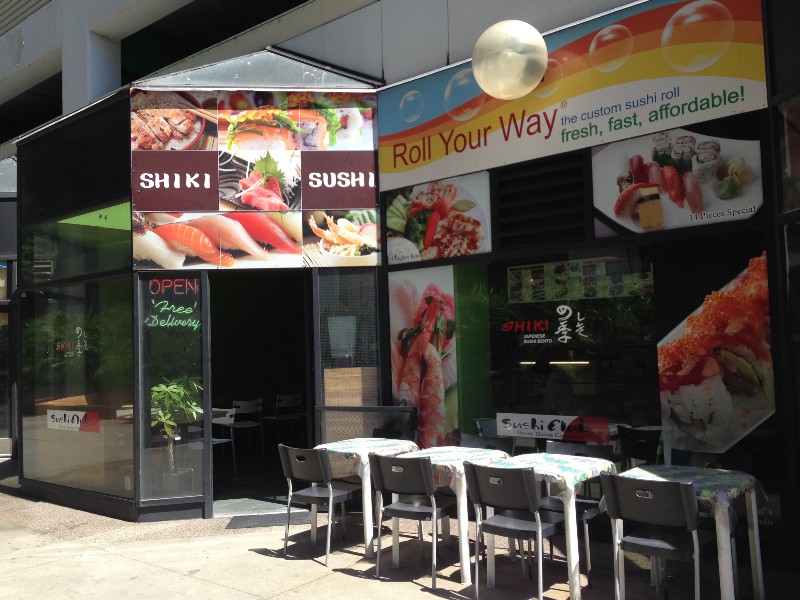 All my friends warned me not to eat raw fish somewhere that had a 1.5-star rating. And I agreed with them. That is, until I walked into Shiki and realized it was just a clone of any mall sushi place. It was clean, and I have a weird affinity for mall sushi, so I changed my order from an avocado roll and risked it with a tekka maki (raw tuna) and a miso soup. I haven’t eaten since, three days later. Though for the sake of fairness, I ate this during the same hour as I ate Indian (the next review), so I can’t totally guarantee that this meal was the trigger.

The tekka maki wasn’t bad. I wouldn’t say it was “good,” but I’ve definitely had worse sushi … by taste (aftereffect is a different story). But it was definitely edible and passable as low-quality sushi.

Weirdly, the ginger was really good and flavorful.

The “sushi chef” (a.k.a. the only other person except me in the restaurant) used gloves when making the sushi. I thought this was a good sign.

The miso soup was fine — not great, but fine. (Disclaimer: I spent a lot of time living on instant miso soup in Hawaii, so I have a low-quality standard for this. It very well could have been instant soup.)

My initial visit was disrupted when I went during Shiki’s posted hours, and they had decided to close … five hours early.

I have been stuck on a toilet since, for three days.

“Aggressively bad food. Literally bad food: my salmon had spoiled probably the day before. My friend got the chicken teriyaki bento box, and they microwaved the chicken right in front of us, which, I suppose, is honest, at the very least.” 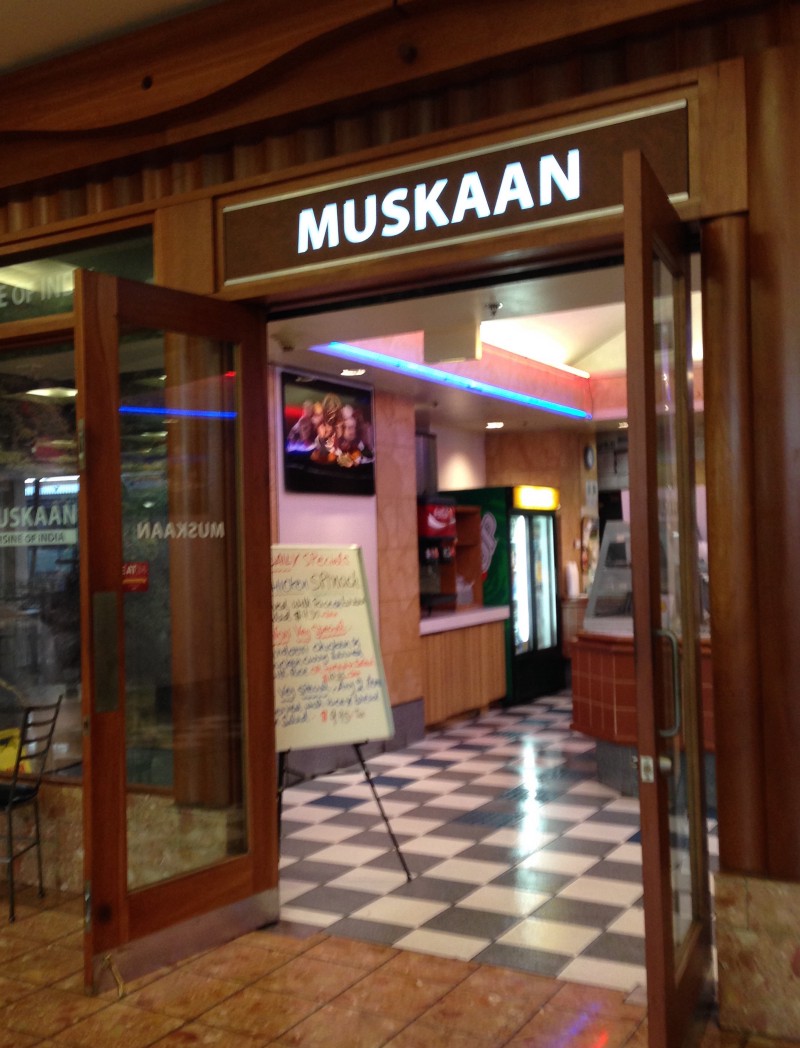 Like Shiki, this place didn’t keep its posted hours, so I had to return and just made it through the doors on my return visit. Indian food is one of those cuisines that doesn’t always agree with diners’ stomachs, even when the quality is really good. I’d never had an issue and figured that if I stuck to vegetarian meals, I’d be fine. Muskaan is in the food court of the Rincon Center, and I found that there are few things more depressing than eating bad Indian food in an office-building food court. My advice: take your lunch break somewhere else.

Despite being the only customer in the place, the woman behind the counter initially ignored me and stayed on her iPhone the entire time as I ordered and was served. She did take a break while I paid.

The same spoon was used to serve different dishes.

The food looked like slop, like that gruel of school lunch myths. It had a weird grainy consistency like that of instant grits. It could have been days old. The naan was doughy and flavorless. All the other food blended together in color and consistency. I took two bites of the vegetable masala, one bite of the paneer, and two bites of the aloo ghobi before I tossed it.

It wasn’t cheap — two dishes for $10 would often be a deal in other cuisines, but Indian lunch buffets are often less than $10.

“I’m angry as hell that I paid $12 for this foul gruel. I’m about to go back over there and let them have it, right in the face.”

This article originally appeared on The Bold Italic and is republished here with permission.