My “office,” an English classroom in a middle school in South Korea, has a view on either side.

To the right, I can see a wide, swampy rice paddy with craggy mountains behind it. The sagging farmer’s shed tells me someone tends the field, but I rarely see a soul. To the left, a wide street of loud motorbikes, car horns, buses. Shops and restaurants are stacked in narrow buildings, their bright signs hanging over the sidewalk. Somewhere, there’s always scaffolding, always the noise of construction. I feel lucky for the contrast.

There are a lot of Matadorians with lucky windowscapes, too. Staff and supporters contributed shots of their awesome views, from downtown rooftops to the Grand Canyon. 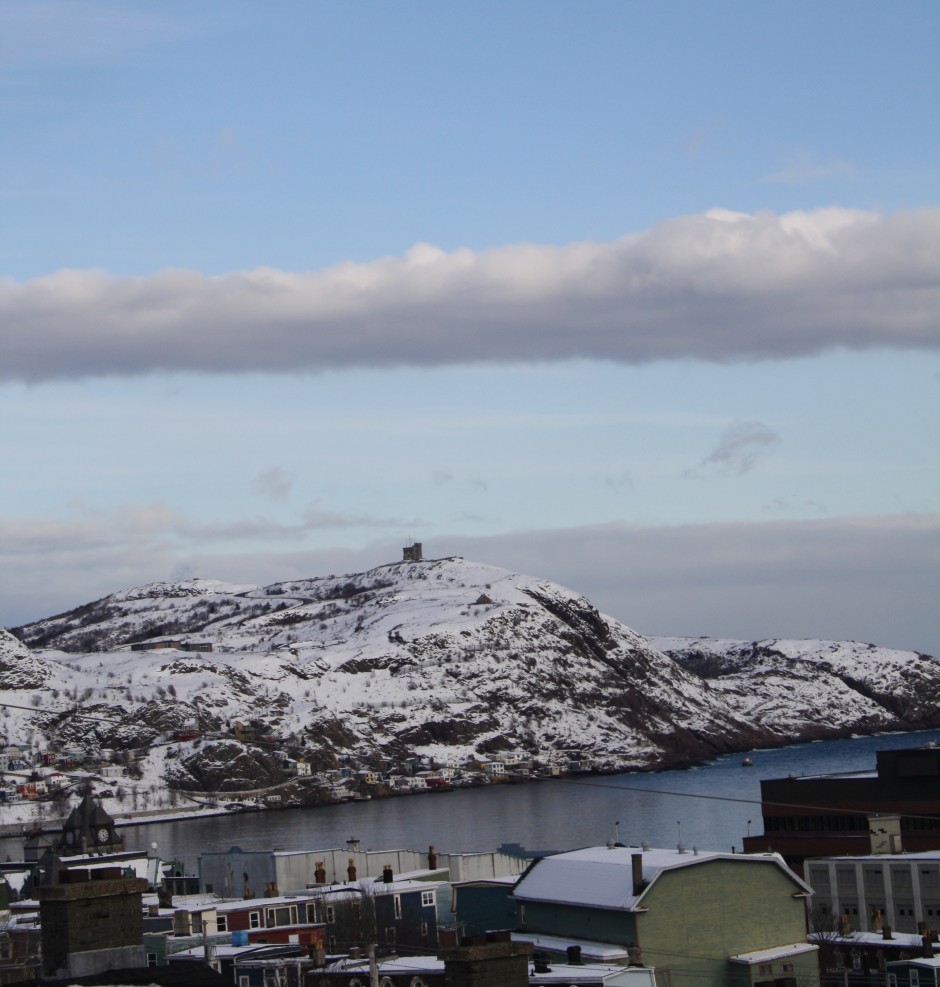 Working from home in St. John's, Newfoundland, Matador Life Associate Editor Candice Walsh gets to look at Signal Hill each morning from her kitchen table. 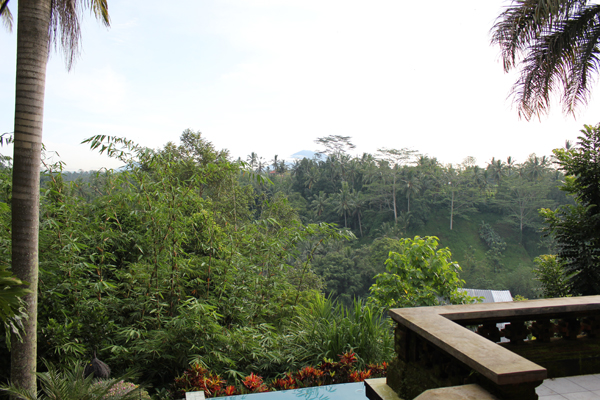 Steve Brenner is an American expat on sabbatical in small village outside Ubud in Bali. He moved to Bali to send his children to Green School in the middle of the jungle. Working from home, he can see the active volcano Mt. Agung on a clear day. 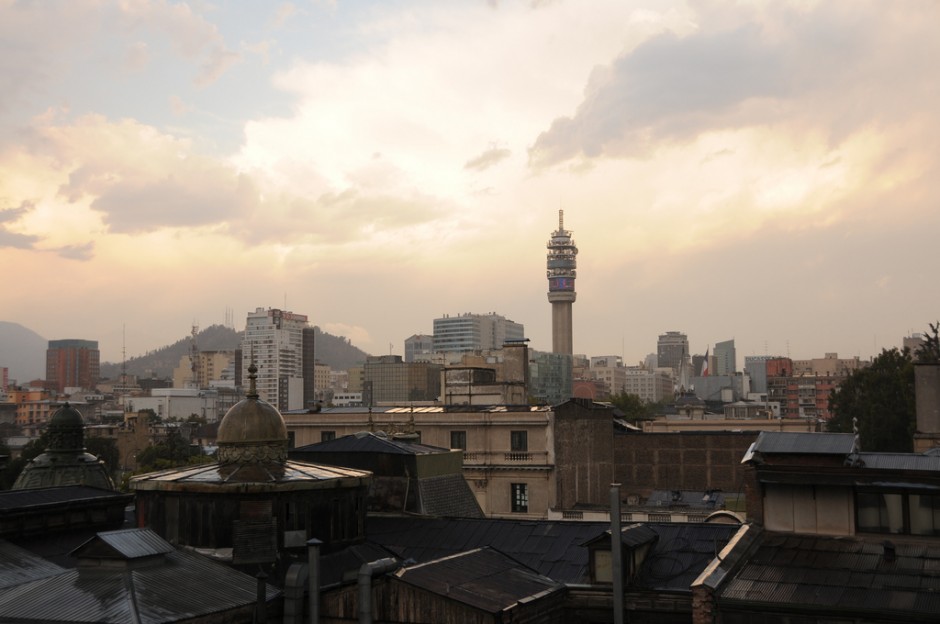 Matador's Editor at Large Eileen Smith is based in Santiago, where she works from home as a writer, editor, translator and photographer. Her office is her living room, with a sweet view of the city. 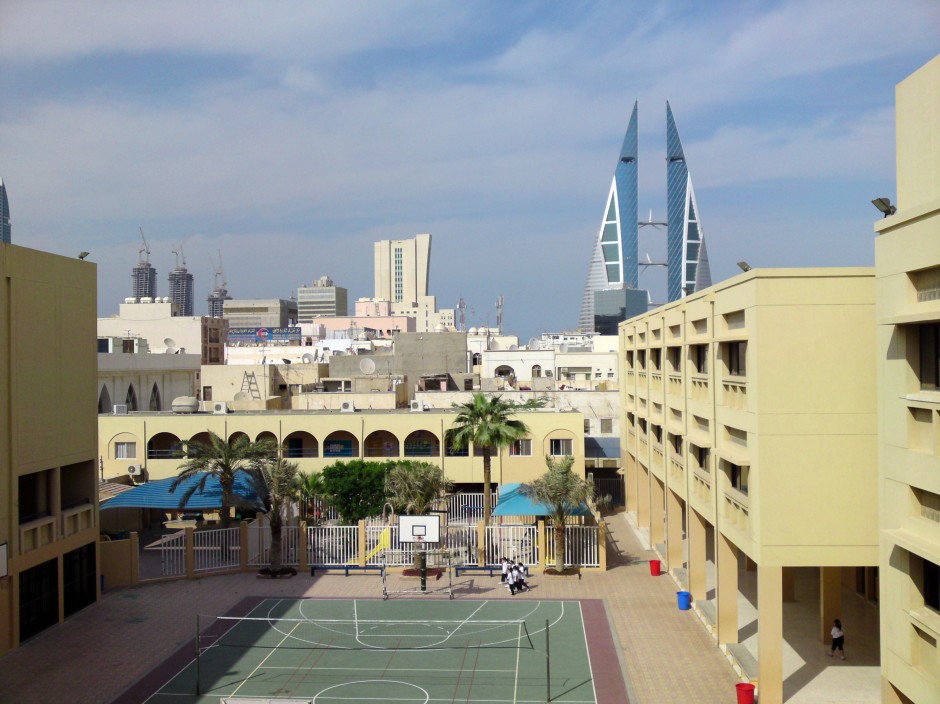 American teacher Zeynep Bayraktaroglu has been working in Bahrain for the past 6 years. She teaches at Al Raja School, the country's oldest private school. Last March, Zeynep covered the Bahrain protests from a teacher's perspective. 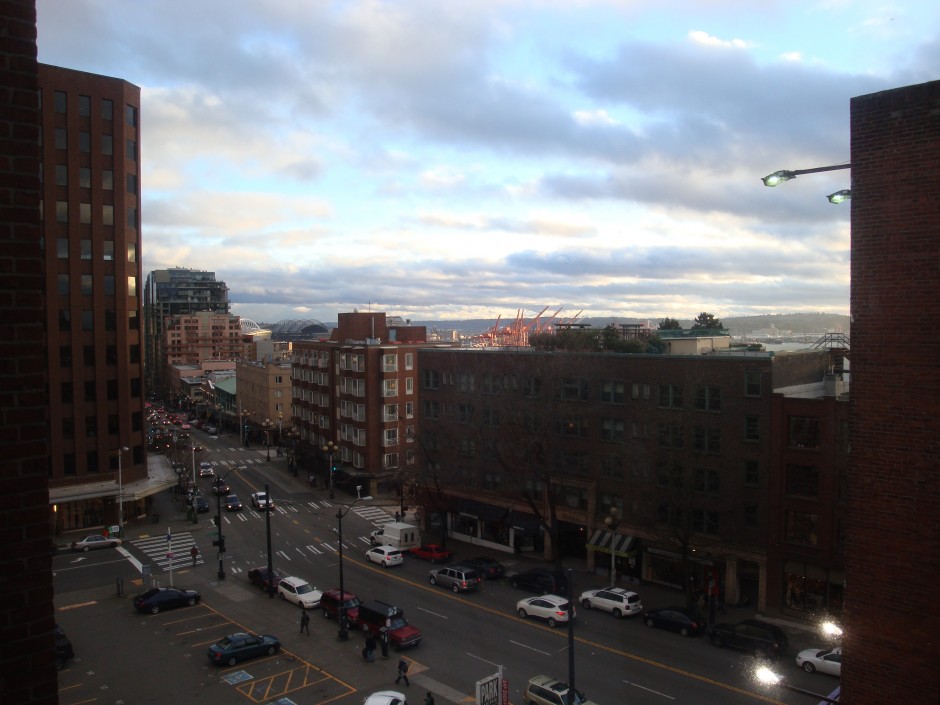 Michelle Schusterman, Associate Editor for Matador Goods, works from home in Seattle, Washington. Living downtown, her window looks out over 1st Avenue, with Puget Sound and Pike Place Market in the distance. 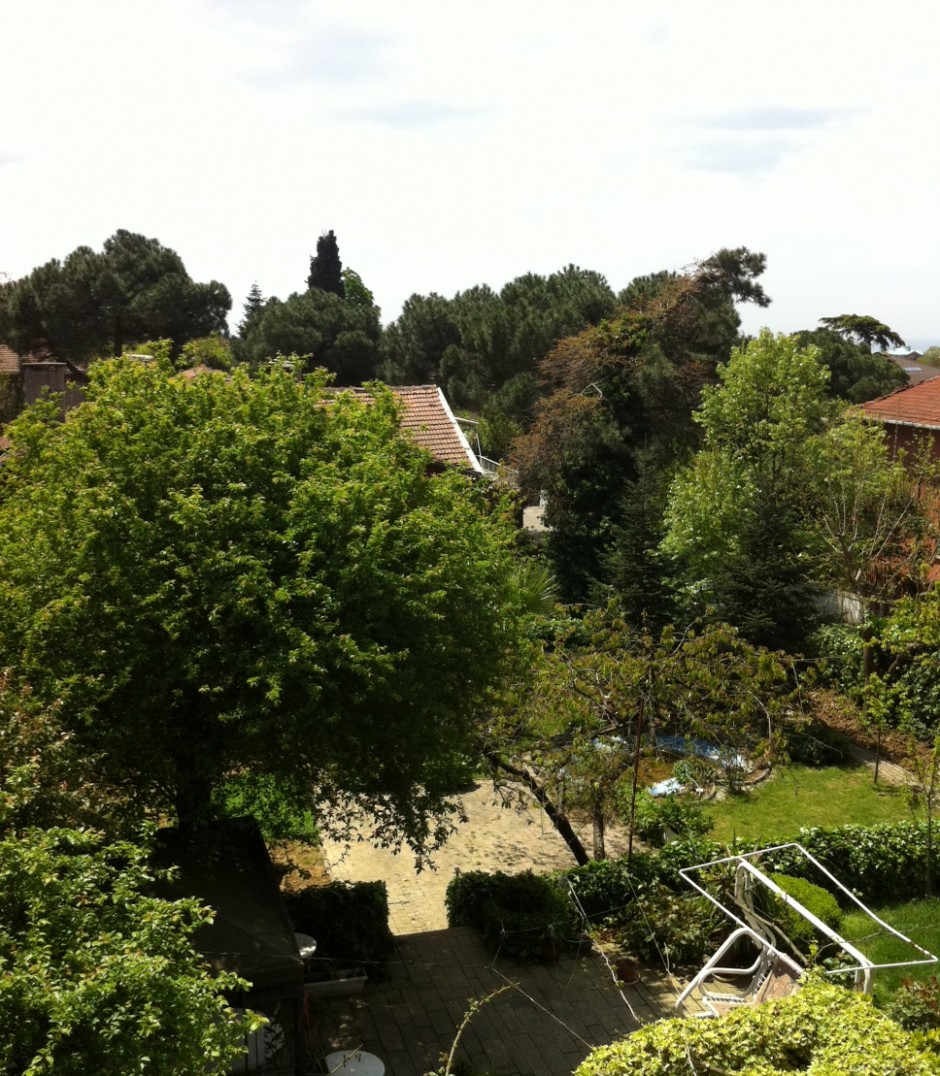 S. Ergenekon Dincer is a sales rep for a paper packaging company, and works in Uskudar, Istanbul. He loves his office, saying, "unlike most business places, our head office building is in a heavenly, quiet residential area where there are lots of trees." 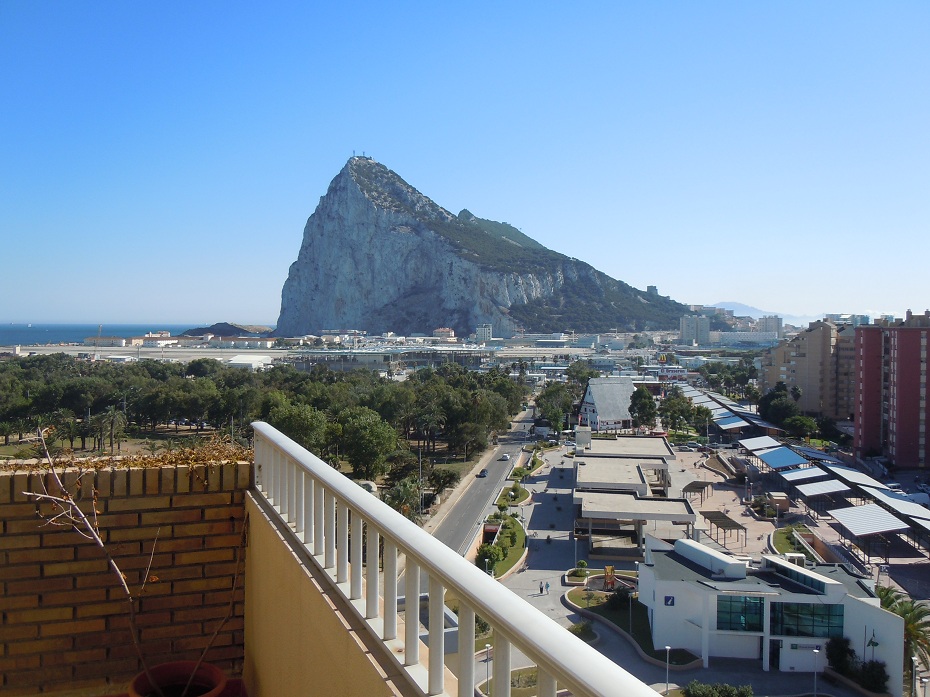 Matador Notebook and Matador en Espanol intern Jason Wire can see two continents from his (home) office window in Gibraltar. That's Morocco on the right, and the mouth of the Mediterranean on the left. 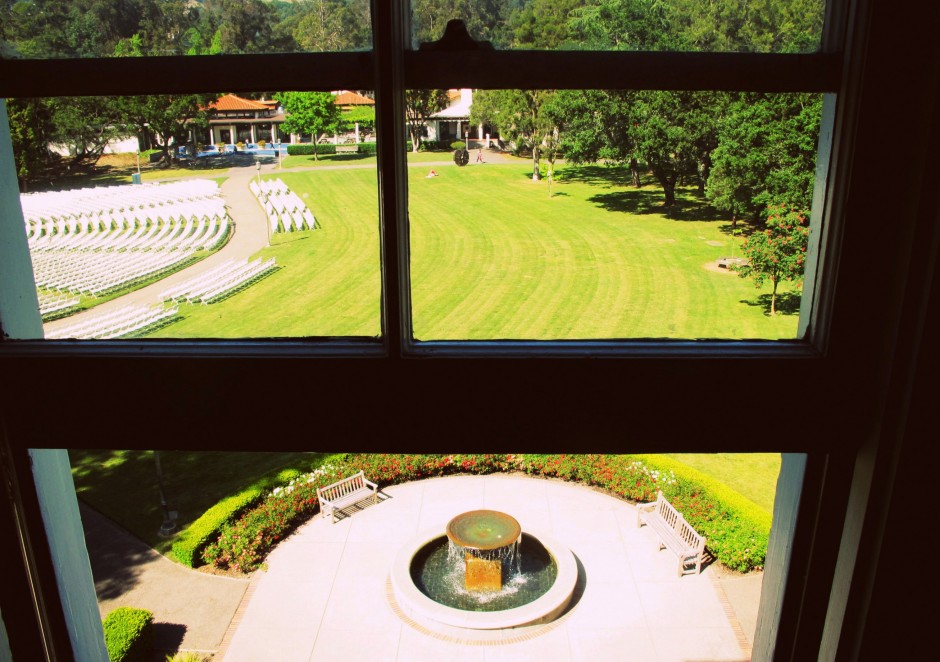 Cheri Lucas works on a college campus in Oakland, California. Her office, inside a landmark four-story Victorian building, has a pretty amazing meadow view. 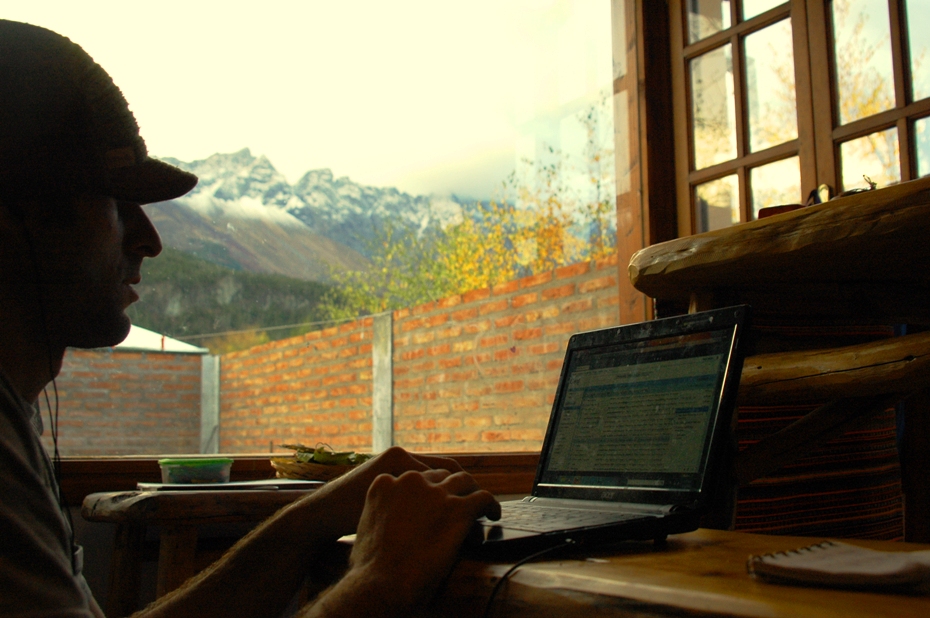 Matador's Senior Editor David Miller snapped a floor / yoga-mat level pic in his kitchen in El Bolson, Patagonia. "I can only sit for limited time at a desk / table. The hammock, or just the floor is a superior workspace for me." In the background, there's fresh snow on the Piltriquitron range. 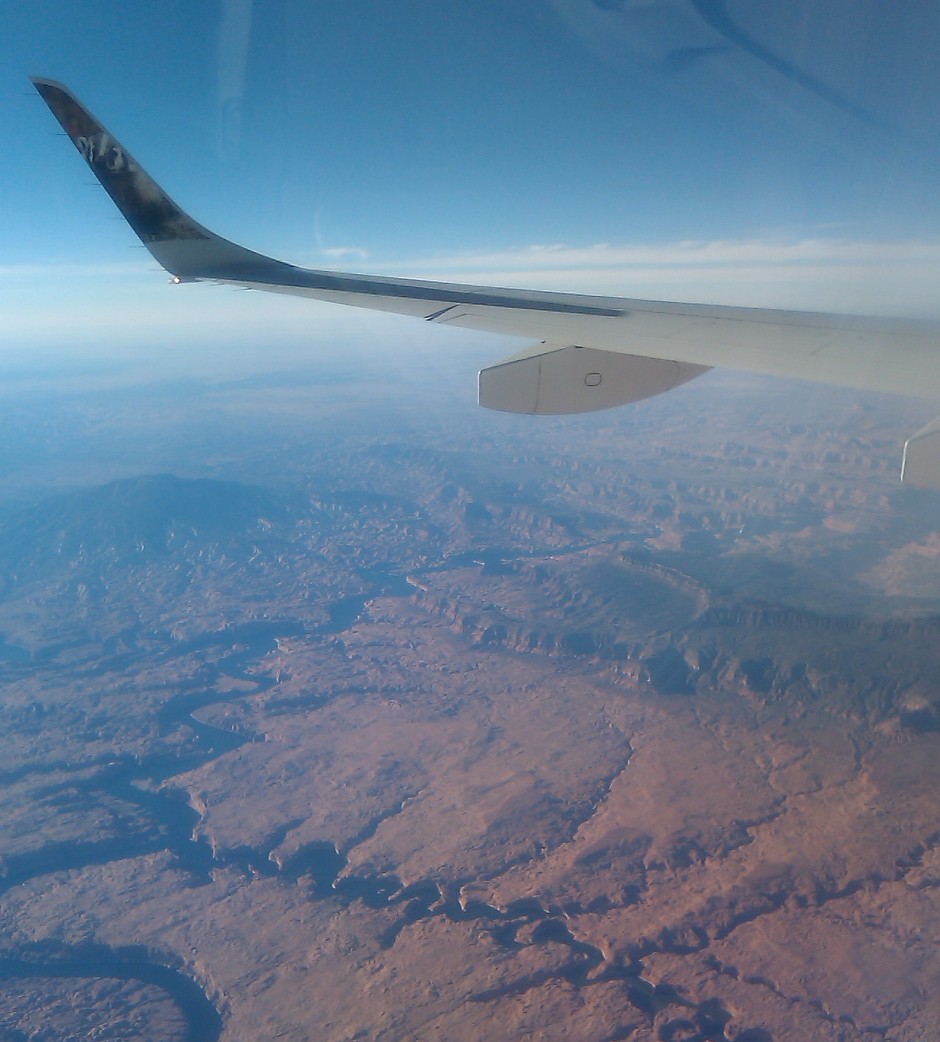 For American flight attendant Clair Norton, the view from her "office" window is ever-changing. Based out of Washington, DC, she snapped this picture while flying over the grand canyon. 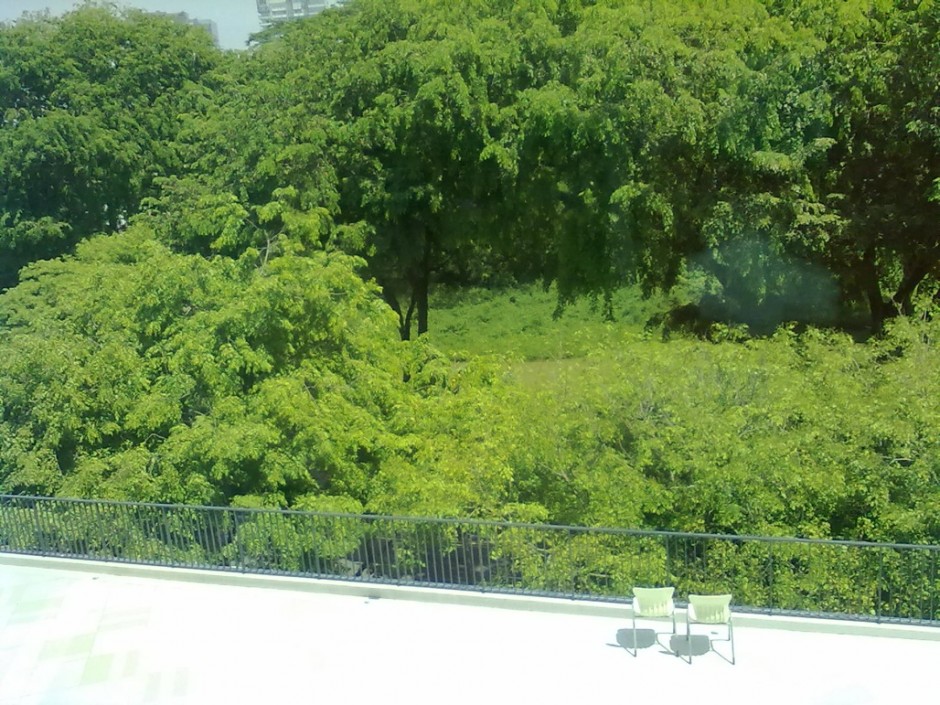 Michelle Tan is a Youth Development Exec at a youth organization in Singapore. She titled her office view pic "the best seats in the house." 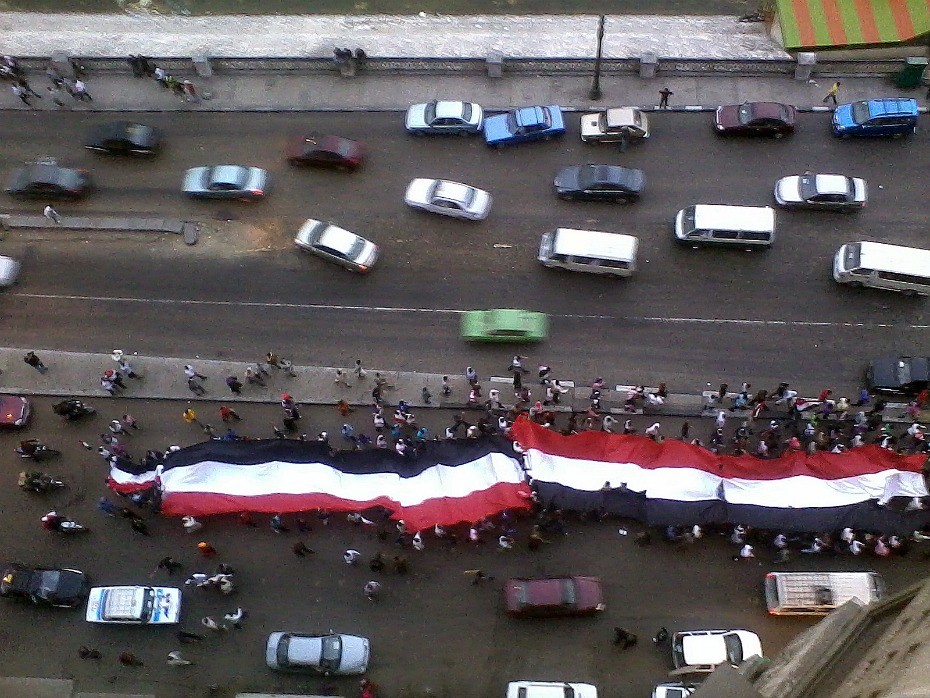 Based in Maspero, Cairo, Matador Life Associate Editor Nick Rowlands works next to the State TV building in Maspero. He took this photo of the street view on the 1st of April, when there was a large demonstration in Midan Tahrir. 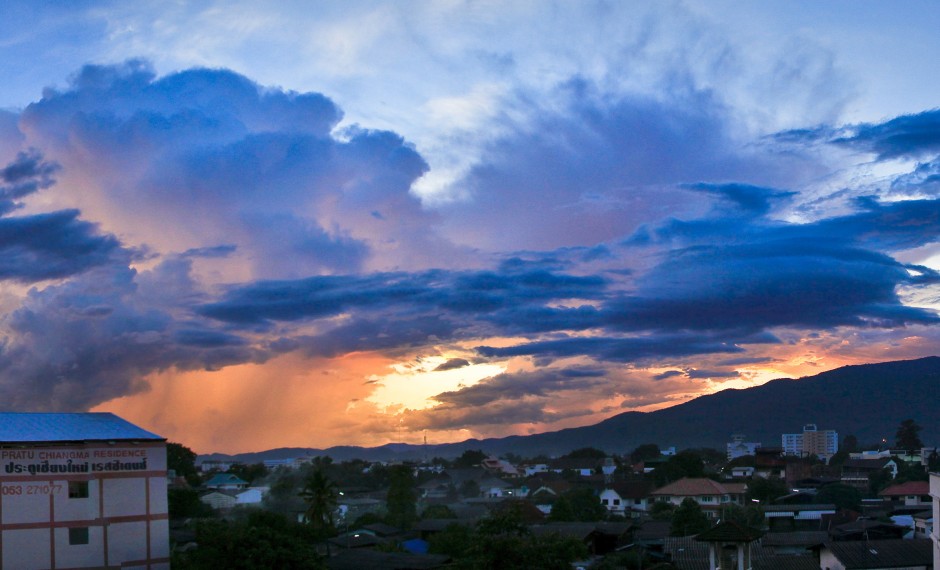 As a photographer, it seems Matador Life Associate Editor Daniel Nahabedian is living in the perfect spot. "Since I work from home, this is the view right in front of my face every day. That's the Doi Suthep mountain in Chiang Mai, Thailand. And yes, rainy season has started." 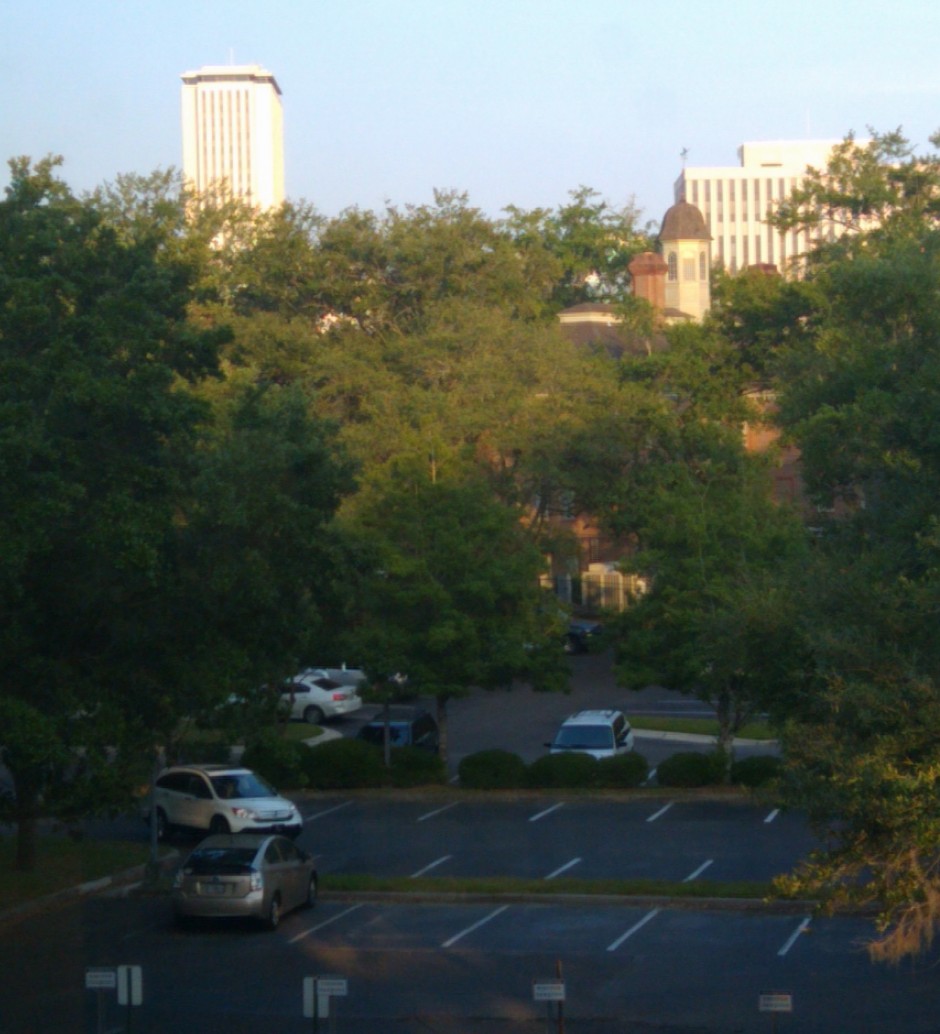 Paula Kiger works for the Florida Healthy Kids Corporation in Tallahassee, Florida. From her office window, she can see the state's Capitol Building. She suggested a quote to pair with the photo: "Democracy is the art and science of running the circus from the monkey cage."-H.L. Mencken 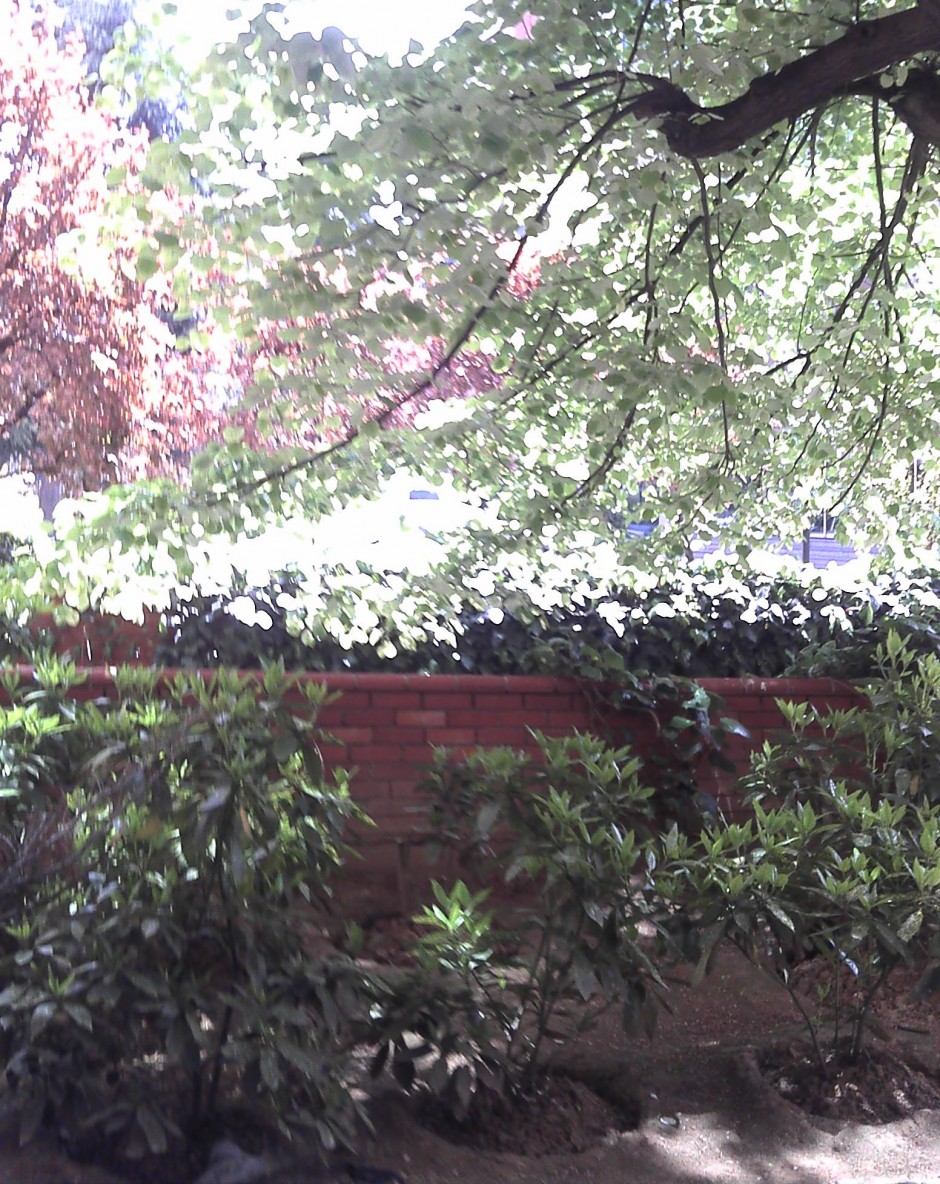 Hsiaona Lin is a Taiwanese expat living in Turkey. This photo was taken out the window of her office in Uskuda, on the Asian side of Istanbul, where she works as project manager of an IT company. Says Hsiaona, "I love spring here, and can just go outside breathing greedily. [...] Its so humid and hot in my country in Asia." 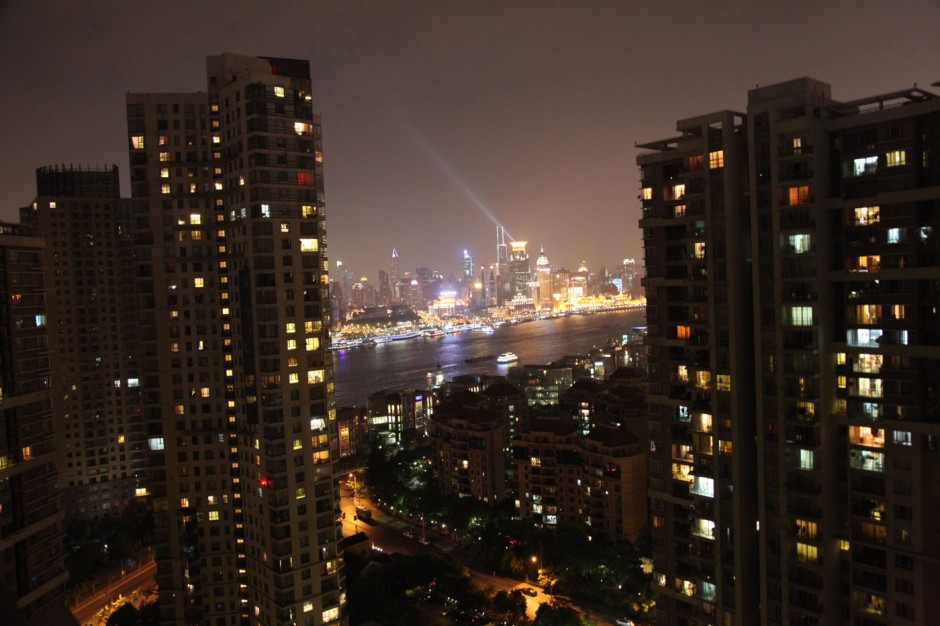 While filming for Matador TV's Breaking Free in China, Chief Operating Officer Ian MacKenzie took a photo from his temporary office in Shanghai.