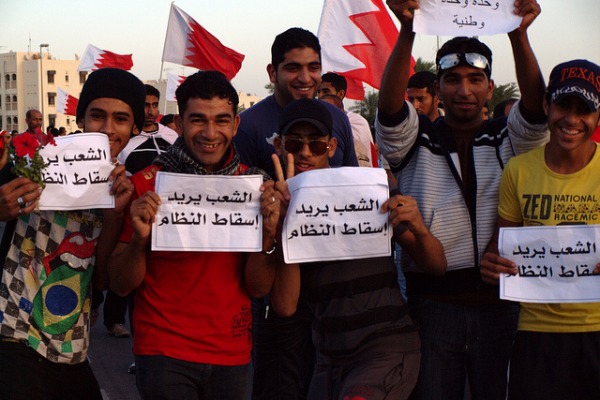 “The people demand the removal of the regime.” All photos by Al Jazeera English

Expat teacher Zeynep Bayraktaroglu utilizes literature and film to help her students open up about political developments in Bahrain.

On the morning of February 17th, I noticed an unusual absence of hasty roaring engines and anxious tooting horns which normally would fill the streets during the rush hour. The imminent clatter of the students playing on the courtyard did not turn up as I approached work.

When I entered the school, I found the playground empty. A handful of students and staff huddled together near the big blue administrative office doors with puzzled eyes. From the telephone calls received, it became apparent that many people couldn’t make it to school because the roads were blocked.

Due to security concerns, we were sent home not knowing when we would be back at school. Back home, I immediately turned on my computer and logged on to social media networks. When I saw the video of tanks rolling down the main highway of Manama posted on Facebook, I found myself wondering whether the recent political turmoil in Egypt would repeat itself here in Bahrain.

Several days later, things slightly calmed down and we resumed work. I entered my classroom with the thought of how, under these circumstances, I could continue teaching Sophocles’ renowned play Antigone, which talks about treachery and disobedience against the state. Would it lead to my immediate deportation from the country? 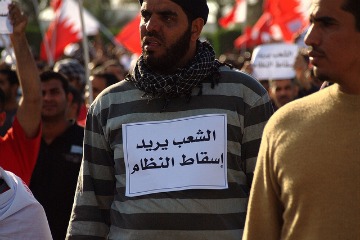 The students came in and settled down faster than usual. They didn’t seem interested in chatting with each other about how their weekend was. Instead they gave me a curious look. They stared as if they were waiting for me to make some sort of a statement.

“What are we going to do today Miss?” asked Ali. I quickly replied that we would continue reading Antigone, and without losing momentum I told them to turn to page 645.

“So, was Polynieces a traitor?” I asked.

“Yes, he disobeyed the king. Disobedience against the state is treachery,” said Ahmed.

Jinan quickly intervened, “No, he wasn’t; he was just trying to get what was rightfully his. Eteocles promised the throne to him after a year.”

“Was Creon right to punish Polynieces, the way he did?” I pushed.

Ahmed replied, “He was trying to send a message to those who think about breaking the unity of the kingdom. The king must protect the state.”

Masoud poked, “Maybe he doesn’t care about any of that. Maybe he just wanted both Polynieces and Eteocles dead so he can be the king.”

Qassim dropped the bomb: “Miss, I think King Creon is like King Hamad.”

Sarah jumped in with soft laugh, “This play is very relevant to the current situation.”

I said “Yes! Who knew it would be?” and continued, “But didn’t Polynieces bring outside forces to fight his battle? Isn’t that treason against the state?”

Sarah smiled, only moving the right side of her lips and said, “Miss, that’s also relevant to the current situation.”

The film does not only disclose the importance a leader’s effectiveness to speak publicly, but it also presents the question of how much power a constitutional monarch should have.

Half of the class was eager to interact, but the other half was hesitant. Although the class resumed in a civilized manner, the situation remained tense.

Some students who used to be friends last week were no longer walking together during recess this week; others who commented daily on each other’s Facebook statuses, removed the ones they felt insulted by from their list of friends. We were all affected by what was going on one way or another.

The uncertainty of the political situation was making me nervous as well, but what really broke the camel’s back for me was the pandemonium caused by the blare of the continuously hovering helicopters up in the sky. I found myself wondering how people in constant conflict areas were living without completely destroying their psychological well-being.

Even though both my students and I wanted to speak about what was going on, there was an unspoken understanding that we weren’t supposed to. For the sake of my sanity, I needed to end this silence.

Thankfully, the Oscar-winning movie, The King’s Speech provided a vehicle to do just that. The film does not only disclose the importance a leader’s effectiveness to speak publicly, but it also presents the question of how much power a constitutional monarch should have. I decided to step out of my teaching routine and take a chance on a radical assignment. I prepared a worksheet of opinion questions, which I asked the students to complete in discussion groups after we had watched the film.

“Should a constitutional king do what he wants, or should he do what his people expect him to do?”

“I think he should do the will of his nation.”

“Well, actually, it depends. What if what they want is not good for the country?”

“Does he really have power to do what he wants?” 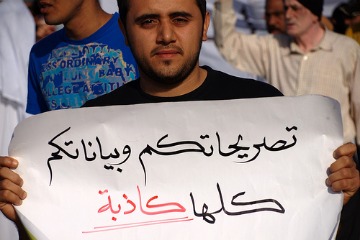 “No he doesn’t. Where is your evidence?”

“Then, why was King Edward VIII forced to abdicate his throne and King George VI allowed to marry a commoner?”

“Maybe it is because… Hmm, I don’t know. Miss! Why was one able to marry a commoner and not the other?”

“If a constitutional monarch does not have power to make decisions without his cabinet, how can he do what his people expect him to do?”

“I am not sure. What can he do anyway? What is expected of him anyway? If he doesn’t have the power, what’s the point of his position?”

“Attention everybody! Make sure to back up your opinion when you write your answers…”

Finally Jinan said, “Miss, I really enjoyed this activity. It’s very interesting. I think if it weren’t for what was going on in Bahrain, I wouldn’t have understood it.”

Have you ever taught in a similar situation? What did you do? How did the students react?