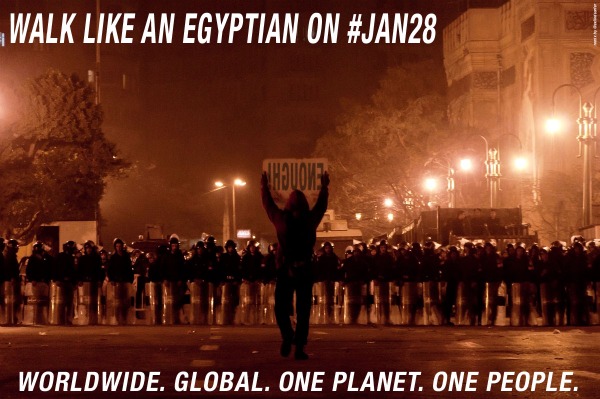 Nick Rowlands vents his confusion and frustration at being stuck hundreds of miles away from his friends during the Egyptian uprising.

I’ve done nothing for the past three days. Nothing but stare at my twitter feed, click through to the Guardian live blog (This page will update automatically every minute: On), flick back to twitter, read eye-witness reports and watch ground level shaky videos with blurred images and the rumbling static-roar of crowds in the background. Then back to twitter.

Every time I close my eyes I see scrolling lines of tweets, Matrix style.

Occasionally I remember I’m supposed to be working, and I scribble unintelligible bullet points on a scrap of paper by my computer. Then I’m back to twitter. Obsessed. The half-hearted notes are for a presentation about online travel writing I’m giving tomorrow, the reason I’m still in England.

The reason I’m not in Egypt. Shit got real. And I’m not there. And I don’t know how I feel about that.

This isn’t the place for an analysis of the uprising in Egypt – there are people far better qualified than me to do that. And I can’t give eyewitness accounts of what’s happening. Because I’m not there.

When I watched and read about Tunisia’s Jasmine Revolution – it’s always flowers – it didn’t feel real. It wasn’t real. My response was detached and quite possibly pompous and condescending: “good stuff – go Tunisia! – shit look at that teargas! – this could be interesting for the region – how many were killed?” 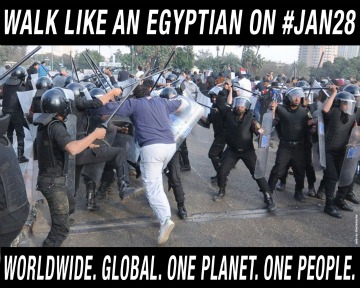 But this is different. Egypt has been my home for the past four and a half years. People I know, friends of mine, are protesting, covering the protests. Being shot at and dodging teargas and being arrested and beaten and dumped in the desert. Organizing and communicating and encouraging online, through Facebook and twitter.

Tweets recording events as they unfold, on how to circumvent the blocks placed on Facebook and twitter, sharing advice on mitigating the effects of teargas, asking people to take blankets and food and water and cigarettes to protesters – that on the first night, before the state’s violence caught up.

As this great piece by Jillian C York points out, this is not a “Facebook” revolution. Social media is a tool used by the activists, not the reason for the uprising. And it’s a powerful way of spreading information about what is happening at ground level.

The Guardian is quoting tweets from numerous journalist eye-witnesses. I don’t need to hear how “William Hague … urged the Egyptian government ‘to respond positively to legitimate demands for reform.’” I need to hear, “El Giesh street looks like a war zone. Burnt out tires and rubble litter the street. Police checkpoint destroyed. #jan25 #egypt” (from journalist Ian Lee).

So I watch it unfold in streams of 140 characters. And email and message friends out there. And re-tweet. And pretend I care about the work I’m not doing. That I can concentrate on anything else. And I wonder.

I wonder if my friends are safe. Their families. How long this will go on for. What it will achieve. Whether it’s true live rounds were fired on protesters in Suez. What I would be doing if I were there. 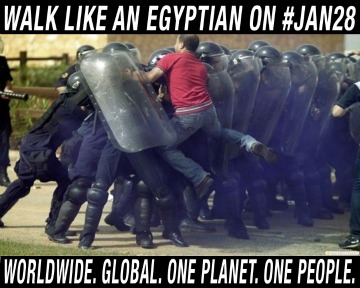 Would I join the demonstration tomorrow? It’s going to be ugly, uglier than what we’ve already seen. What I haven’t seen. Easy to say it’s not my country, not my fight. But – it’s all our fights. Isn’t it? Easy to say this from my mum’s kitchen table, talking about a country and a people that I know well and I love.

But I wouldn’t take a bullet for it. Would I in England, if the situations were reversed?

And when you get down to it, that’s how I feel. Guilty and confused and impotent. Terrified and excited and worried and proud and angry – angry that the world hasn’t stopped, that right next to a tweet with a link to a video of a young man facing down a fucking water cannon, is one about the ten best places in give-a-shit to eat donuts.

Guilty. That I’m not there and that I don’t know how I’d behave if I were. That I have a choice. That I’ve been meaning to leave Egypt for a while, and now I don’t see how I can’t go back. That, despite the minimal chance of being beaten with a metal bar and then vanished, I’m still not attending the demonstration in London tomorrow. Because of work. A prior commitment, too important to my so-called career to cancel.

And now the Internet has been shut down in Egypt. The whole damn Internet. And SMS services too. What the hell is going to happen tomorrow? How will we know?

What do we do when shit gets real, and we’re stuck hundreds of miles away?

I really wish I was there. I’m really glad I’m not.

Have you ever been involved in a situation like this? How did you feel? Share your thoughts below.

For more information on the Egyptian uprising, follow the Guardian’s live blog, The Arabist, The Daily News Egypt, and Al Masry Al Youm. You’ll find their twitter handles on their homepage too.

Tagged
News Egypt
What did you think of this story?
Meh
Good
Awesome