View all travel news
Top Destinations
Top CitiesView All Destinations
Trending Regions
Trending Cities
Load More
Amsterdam: We all know about the drugs. If you want the sex, go straight on from Central Station a few hundred meters and turn left. The rock ‘n roll seems a bit harder to find.

The most famous places to see music live onstage are still the Paradiso and de Melkweg (The Milky Way). Both showcase world-famous artists of all genres, but also lesser-known / local bands and musicians.

Paradiso is a former church and the Melkweg is just a big black box, but what you get atmosphere-, crowd-, and music-wise all depends on who’s playing that night and the audience they attract.

The weird thing about the Melkweg is that because they have two stages, it sometimes happens you have Beenieman performing on one with a Caribbean audience — the girls dressed up in their shortest hotpants and big muscular black guys wearing bandanas and a lot of gold — then the Hayseed Dixies on the other, with your long-haired, black t-shirt, Converse Allstar / Dr. Martens wearing white boys.

Something similar happens in Paradiso after the gig. If you’re lucky, the DJ will play one or two songs in the same style as what you just heard, but after that something completely different takes over. More like a student party with all singalong dance hits, which is great fun. But the hour when one crowd gets out and the other comes in is often a buzz-kill. 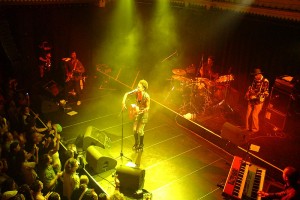 The Nieuwe Anita falls outside every known category. Not only can you see and hear great music that’s new and different, but there might be a girl present who’ll read your tarot, another who’s giving haircuts, and then some dude giving massages.

Other nights you can watch a movie, hear a literary reading, or drink cocktails. The guys wear big glasses and definitely own the latest Apple products. The girls are into thrifting, crocheting, and blogging about their cats.

The place started years ago as a squat, and only recently became popular. It still has that underground DIY feeling in a very cozy way.

When you enter the Maloe Melo, you see a bar with a big tattooed guy behind it. A few people hang at the bar drinking, and look like they’re there every night. Some guy is slamming the buttons on the side of the pinball machine. This is not the place you had in mind when you thought of a good party in Amsterdam.

Don’t panic, don’t turn around just yet. Greet the big guy behind the bar and walk on. At the end of the room there is a door. When you get closer to the door you’ll hear the music and smell the smoke. Open the door. There you are. It’s dark, it’s smokey, there’s a band onstage, and the audience is drunk or on drugs or both. They are dancing.

There can be anything from 5 to 50 people present, but there they are and they’re not going home. A bar is on your left. There’s an old guy behind it with long hair in a ponytail and a bald patch. He has a cigar in his mouth. This is Jur, the owner. Look at the photos on the wall — he has been there since the ’70s with that same cigar, and no smoking ban could stop him.

The Maloe Melo offers all types of music despite its title of “Home of the Blues.” Every now and again you can be pleasantly surprised by one of the bigger bands that’ve just played the Paradiso or Melkweg making an appearance here, stepping onstage for a late-night jam. This is when Jur gets his accordion out! Expect to go home about the same time other people go to work.

If you have a bike, pedal out to Café Pakhuis Wilhelmina on the Veemkade on the river IJ to the east of Central Station. Not so long ago this area was a long line of dilapidated old warehouses. It wasn’t the area where you’d walk around at night, and even in the daytime there was really nothing to find unless you were a crack junkie. 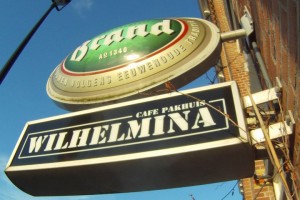 In the last few years, the best architects and city planners merged the old with new and modern apartment buildings. The professional couples and young well-off families moved in. They also like to drink a beer or two on a regular basis, and dance a little — if that’s alright.

The audience is a bit older than the bars in the center, which makes the atmosphere more relaxed. A bit like a neighbourhood-streetbarbecue-afterparty on a hot summer day or something. The kids have gone to bed. Mummy had a few Chardonnays too many and started dancing. Daddy looks at her curves, realizes he still finds her attractive, and opens another beer.

Winston Kingdom has live bands most nights of the week, with a mix of local and international acts. It’s located on the Warmoesstraat, a touristy street next to the red-light district, full of hotels, hostels, Irish bars, English bars, coffeeshops, sexshops, and smartshops.

Whether the music is good or not, you can still jump, dance, drink, smoke, and make new friends from all over the world.

Next door is Korsakoff. Open late. Sometimes packed and sometimes empty. Goths and ex-goths, metalheads, punks, and other pierced and scarred eccentrics aged 15 to 50 can be found here.

If metal is your one love, you might be a bit starved in Amsterdam. The only place that gives a metal guarantee in this city is The Cave. It’s a dungeon, it’s a dive, it’s dirty. You’re lucky if the toilet flushes. It’s beer and whiskey and the ever-present black band t-shirts, long hair, and tattoos.

But most of all it’s about the love of guitars, headbanging, and a fun night out. Live bands from all over the Benelux area occupy the stage / dart lanes at weekends, with a minimal entry fee at the door. Playing darts during performances is not encouraged by the Big Brazilian Barman, who looks like he should be playing bass for Sepultura! 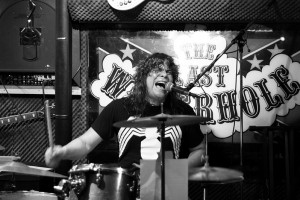 Photo by The Waterhole

If you don’t care about “different” and “quirky” but are just looking for a great party, stay on the Leidseplein and go to the Waterhole. They do 7 happy hours every day: From 2pm to 9pm a pint of Heineken will only set you back 3€. That, I think, is the cheapest pint you’ll find in Amsterdam. Also, free pool tables throughout the afternoon.

They have live music 7 nights a week, ranging from jam sessions to cover bands playing pop / rock hits from Led Zeppelin to Alanis Morissette to the Kaiser Chiefs. Bring your instrument and sign up for a jam.

The next afternoon after you wake up, have a coffee, a long shower, and an Irish breakfast, then buy some sativa and take your hangover to the Sound Garden.

You can’t see the waterfront terrace from the street, but it’s a great place to chill out. If the weather is any good, make sure you arrive early. When the staff is grumpy and slow, it’s because they’re hungover too.

Tagged
Travel Insider Guides Amsterdam, Netherlands
What did you think of this story?
Meh
Good
Awesome