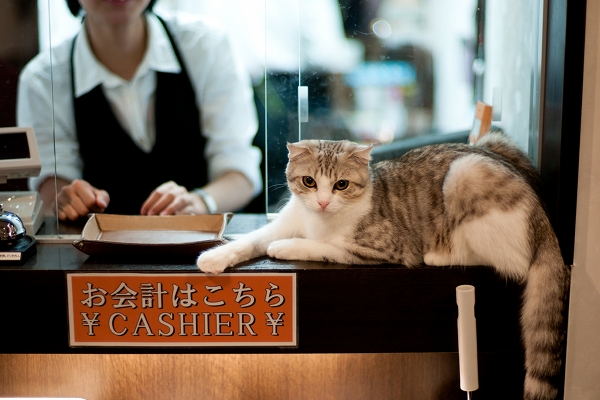 TOKYO HAS 160,000 restaurants, a cultural tradition of artistic food, and more Michelin stars than France. Mix Japan’s cultural elements of practicality, cutting-edge automation, ingenuity, Manga, Cosplay, and innovation with food, and some strange experiences are available.

From robot cafes to nostalgic school lunches, here’s a look at unusual dining spots in Tokyo. Note: There’s a fast turnover for businesses in the city, so try calling first. 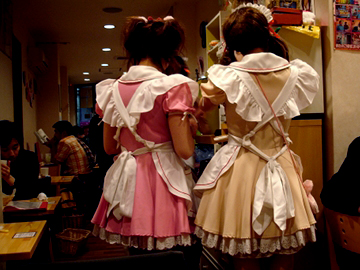 Servers at work. Photo by Foxeo.

Originating in 1998, Maid cafés can now be found all over Japan. Female servers dress in maid costumes like popular anime characters This trend is a thriving Japanese subculture called Cosplay, or costume performance art.

Fans of the 1979 Japanese science fiction animation series line up for hours outside this new café devoted to all things Gundam. 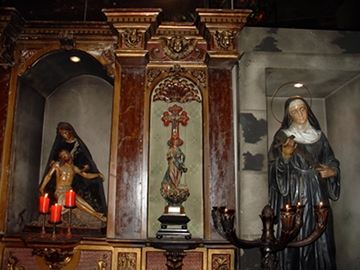 Décor at Christon. Photo by SolGrundy.

For people who fantasize about breaking into a Catholic Church and drinking sacramental wine, there’s Christon Café.

Here, musty European church meets trendy nightclub in the form of stained glass windows, paintings of Mary and Joseph, religious icons, and an elaborate cocktail menu. If you haven’t been to confession in awhile, you might ask to be seated in one of the wooden dining booths with velvet curtains.

Christian imagery abounds in the form of crucifix shaped menus, statues of Jesus, and candle lined altars. The concept is so popular that the restaurant has 4 locations across Japan. 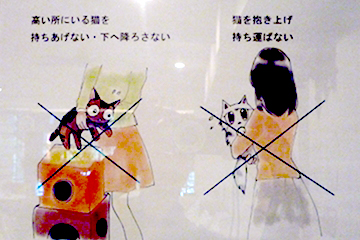 What not to do. Photo by Lydiat.

In recent years, cat cafés have proliferated in Japan. In Tokyo alone, there are 50 spots cat lovers can hang out with different breeds of felines and drink a cappuccino.

Because Japanese buildings often ban pet ownership, cafés featuring cats, dogs, and even rabbits fill the void for furry companionship. In some cat cafés, there’s a no touch policy, but in others customers sanitize thoroughly and then pet by the minute. 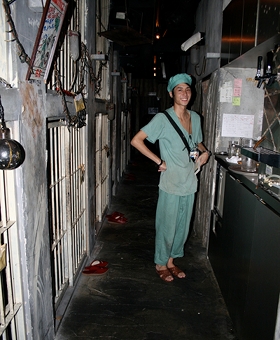 A waitress at Alcatraz. Photo by mskogly.

Alcatraz is a cross between The Shining, One Flew Over the Cuckoo’s Nest, and Rocky Horror Picture Show, and one of Tokyo’s oldest themed nightspots.

There are handcuffs, chainsaws, cocktails poured through syringes, menu items like “Dead Chicken”, and servers who wear mental ward doctor and nurse’s uniforms. There’s lots of screaming and raucousness, so be prepared for a loud evening.

If mental ward dining doesn’t appeal to you, how about eating in a prison cell? Patrons of Lock Up can expect to be handcuffed and led to a jail cell where they will dine on food presented in chemistry lab equipment served by prison wardens.

There are secret doors, random blackouts, and raving prisoners in hockey masks. Throughout the night, there are also staged jailbreaks and you might just have to hide another prisoner in your cell.

It’s hard to imagine feeling nostalgic for school cafeteria lunches. But in Japan, people apparently do, which is why Kyushokutoban café is successful.

This café takes patrons back to days of recess and show-and-tell. The restaurant reenacts the Japanese tradition of fellow grade-school students serving lunch. Servers dressed in school uniforms plop food on silver metal lunch trays and hand over a bottle of milk.

The décor resembles a classroom with construction paper bulletin boards and small desks. Just like elementary school, except here you can drink beer. 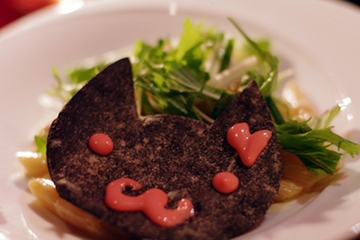 A black cat at the Vampire Café. Photo by HAMACHI!

Not surprisingly, the color theme is red in this dramatic restaurant full of candelabras, broken mirrors, skulls, and a large centerpiece coffin.

Though waitresses wear kinky Alice outfits at this restaurant, the patrons are mostly groups of women.

Customers are granted access through a large door, which opens like a page of a book, and led down a rabbit hole corridor adorned with passages from the story.

The restaurant is decorated with playing cards on the ceiling and floors, lamps made out of funky hats, and tea cup shaped booths. The menu is a miniature diorama to make you feel like a giant, and food items have edible mirrors, Cheshire cat faces, and notes that read, “Eat me!” 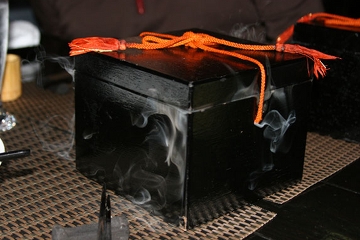 Dry ice leaking out of the lid of a dish at Ninja.
Photo: masochismtango.

Ninja is one of the most popular theme restaurants in Tokyo, and you’ll need reservations well in advance to dine in dim light as trained assassins slink about.

Customers are led over drawbridges and down winding passages to an eating area resembling a 17th century Edo period village. The menu features cocktails with fad collagen additives and set meals up to $200 a person.

The meal includes entertainment in the form of an illusionist who visits your table and other surprises.
1F Akasaka Tokyu Plaza 2-14-3 Nagata-cho Chiyoda-ku, Tokyo
Tel. 03 5157 3936

Find out how to lend a hand to Japan at Matador Change’s How to Help Earthquake and Tsunami Victims in Japan.

To continue on a lighter note check out our Japan Focus Page.

We also have 11 Weird Japanese Foods.

And for more unusual and themed restaurants, check out Modern Toilet Restaurant – A Good Place To Let Yourself Go and In the Dark, Underwater, Graveside, and Up in the Air: 15 Wild Restaurants Around the World.

The TSA has a new rule for snacks in carry-ons. Here’s why. Why true cheese lovers should eat more American cheese 8 sweet, fruity, and savory Brazilian desserts you need in your life Why everyone is baking Funfetti cake in quarantine The 7 best black-owned restaurants in the DMV