FOR THE FOURTH time this past May, I drove from New Jersey to Kansas. Usually an exhausting trip that I try and do as fast as possible, I decided to slow it down this time, and see some sights along the way. One of my stops was in Indianapolis, and I went first to 100 Acres.

Opened in June 2010, the park currently has 8 commissioned art installations, and it’s free (I especially like that part). The area is a mix of modern art, lake, and woodlands between the White River and the IMA. Which meant on my visit that I got to enjoy the the sounds of bird song as I looked at thought-provoking and interesting art. And in my book, that’s a pretty fantastic way to pass the time.

Lindsay Clark, intern for Matador TV, worked as a Curatorial Intern for Contemporary Art at the IMA in the summer of 2007, and she played a part in helping create the park: “All of the pieces are site-specific, meaning I had to film the space or they had to visit it in order to conceptualize what the work would be.” 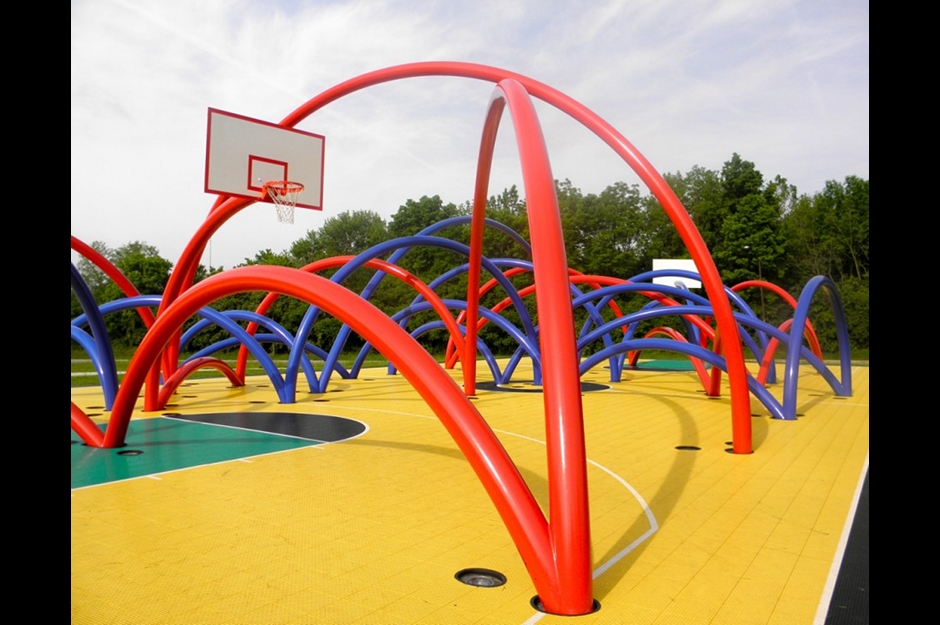 By Cuban collective Los Carpinteros, this piece was designed to show the pathway of a bouncing ball, and inspired in part by the importance of basketball to Indianapolis. 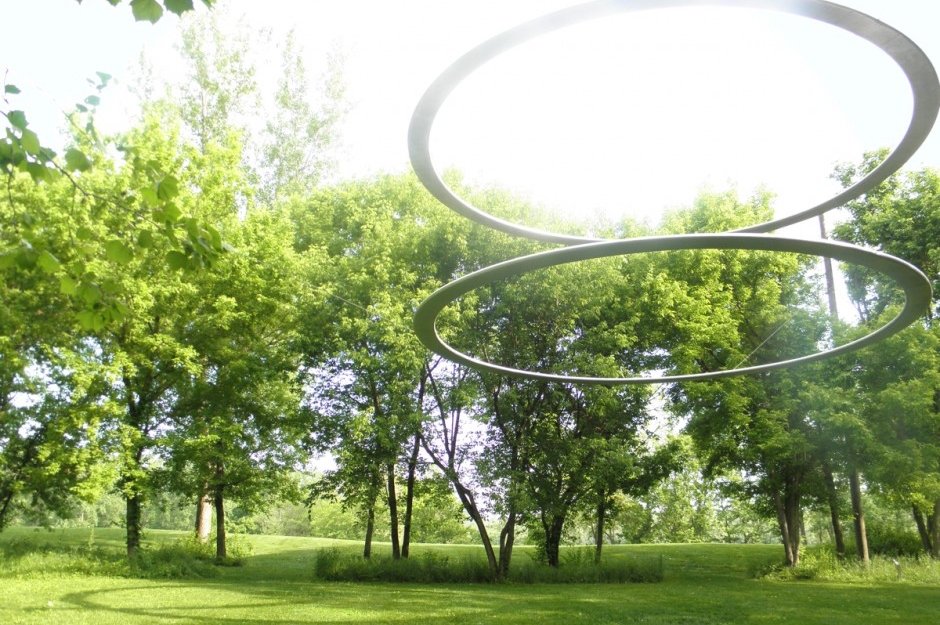 Type A artist collective designed these two 30-foot rings. They are placed so that their shadows align on the summer solstice. I was there close to the time, but the shadows aren't quite lined up. 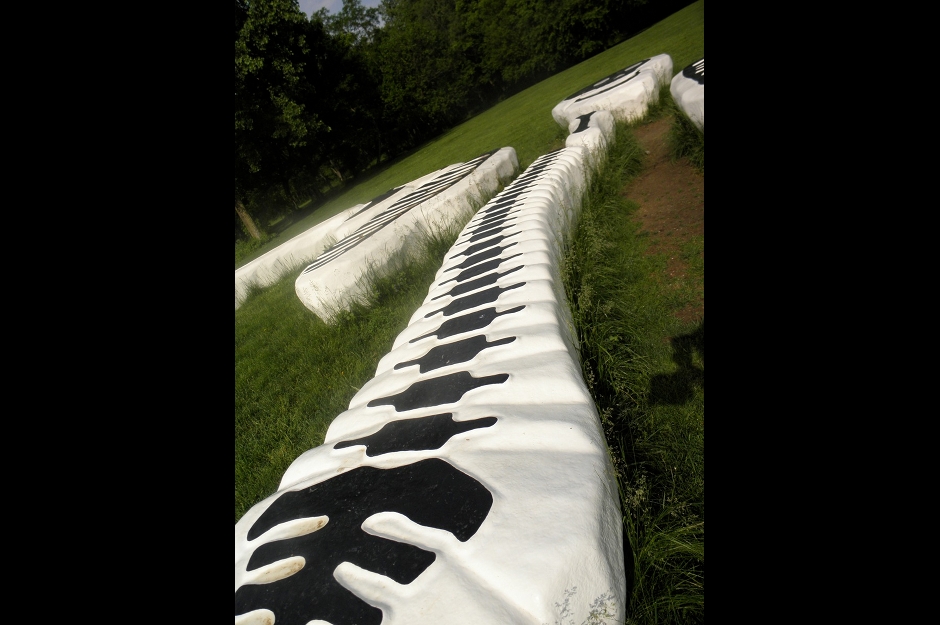 In a large meadow and created by company Atelier Van Lieshout, this piece is made up of 20 fiberglass benches that come together to form a giant human skeleton. It's perfect, and a bit macabre, for climbing and sitting on. 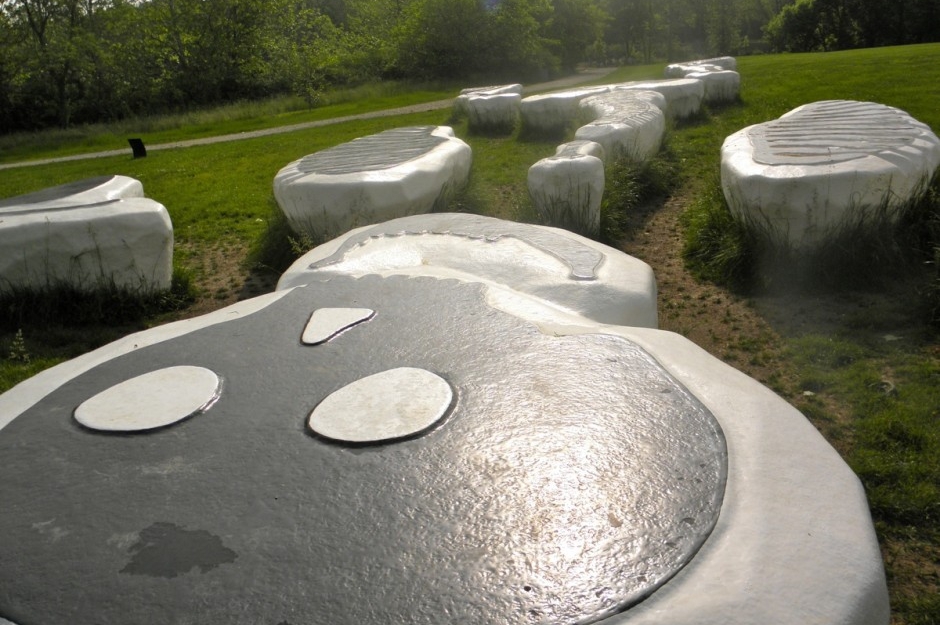 Joep van Lieshout, the founder of Atelier Van Lieshout, is interested in the body, there's no way to see the piece in its entirety unless you're far away. Up close, you get a different perspective. 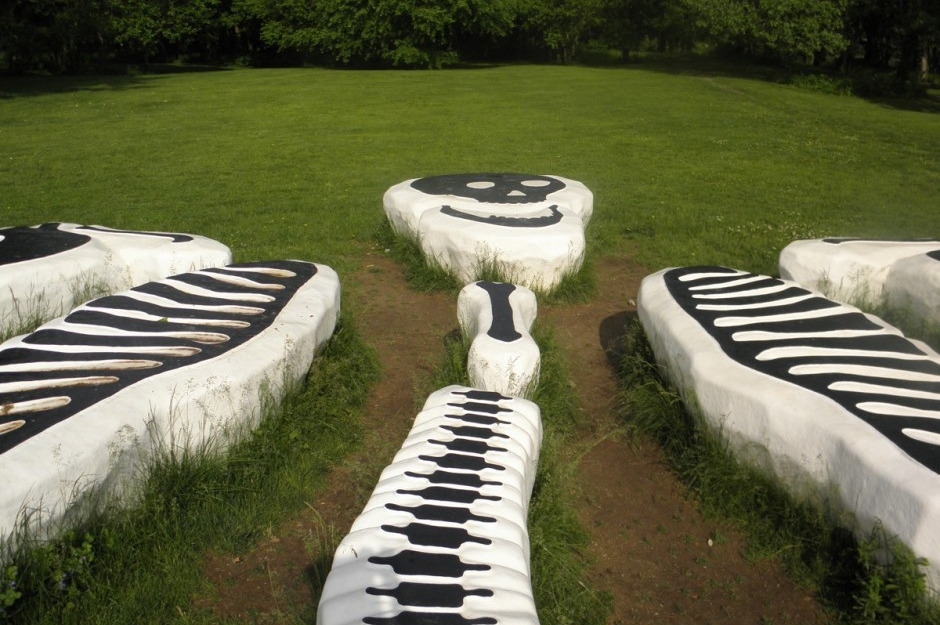 Another view of the Funky Bones. 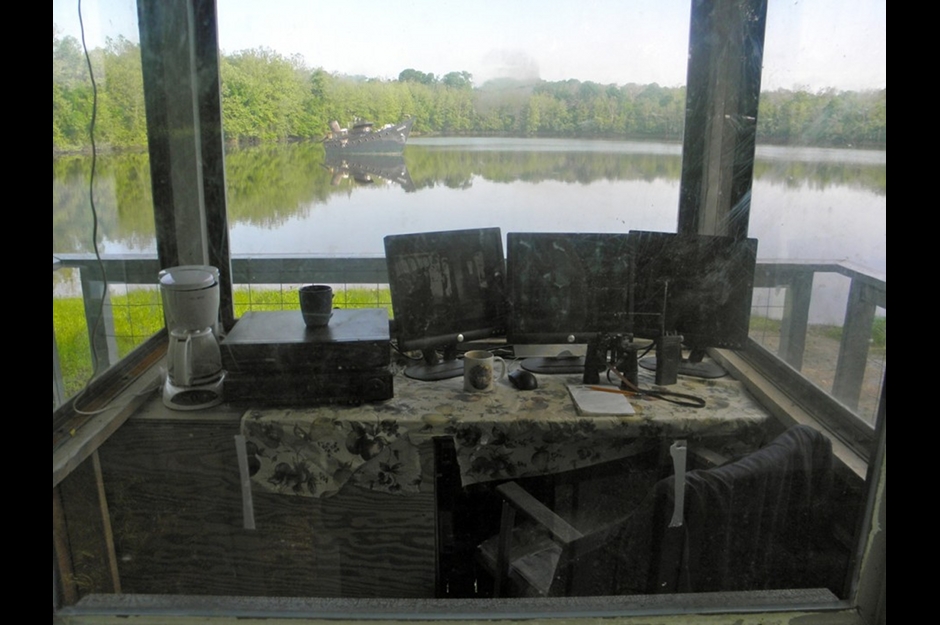 The ship and guard house by Finnish artist Tea Makipaa hint at a much larger story. The guard house, which I at first thought was actually a guard house for the park, shows surveillance footage from the deck and interior of the ship, where passengers are "imagined as refugees displace by rising sea levels and the ecological impact of climate change." The ship "is a modern ark seemingly filled with human passengers from an unknown homeland." 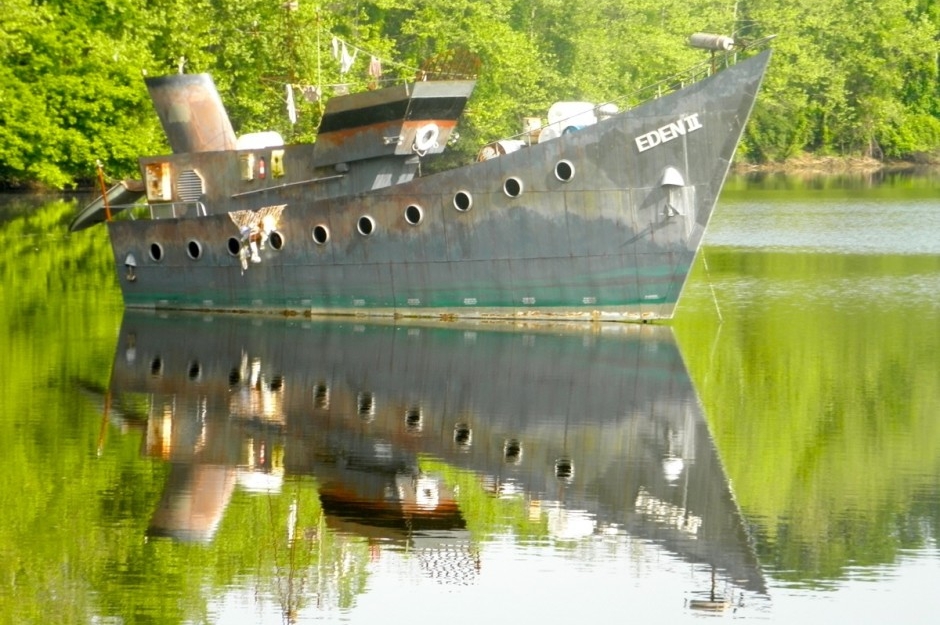 Lindsay Clark worked with the artist and said, "Tea was on the hunt for a massive maritime vessel. Unfortunately, with Indianapolis being landlocked and the budget for obtaining and transporting a dilapidated ship being tiny, this was a fruitless search. In the end, she constructed her own." 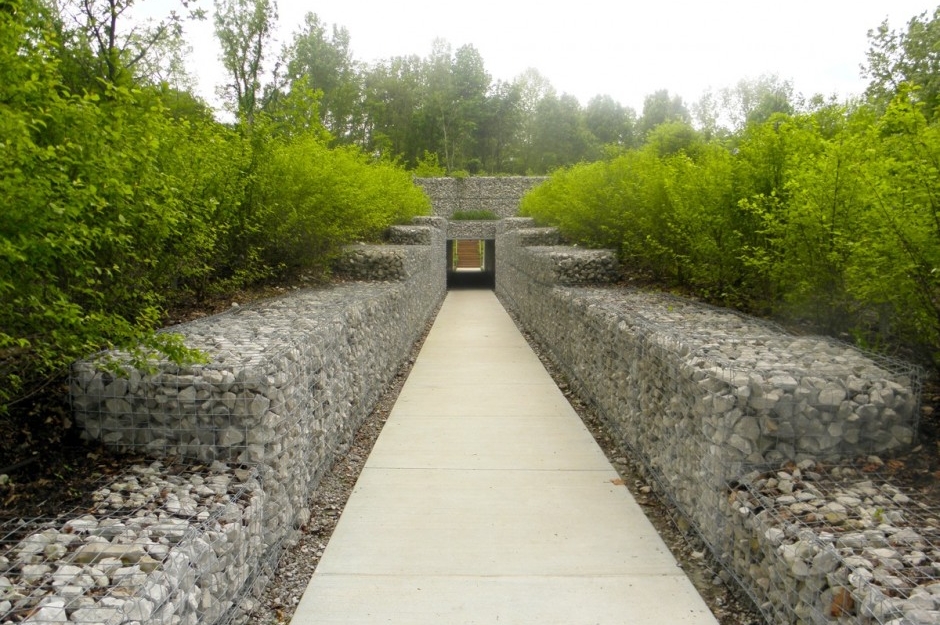 Park of the Laments

Chilean artist Alfredo Jaar created Park of the Laments as a square within a square, one made of trees and shrubs and one of limestone. You walk through a tunnel and into the center of the quiet space. The space is, according to the artist, "a refuge, a place for lamentation and purging the global atrocities of the 20th and 21st centuries." 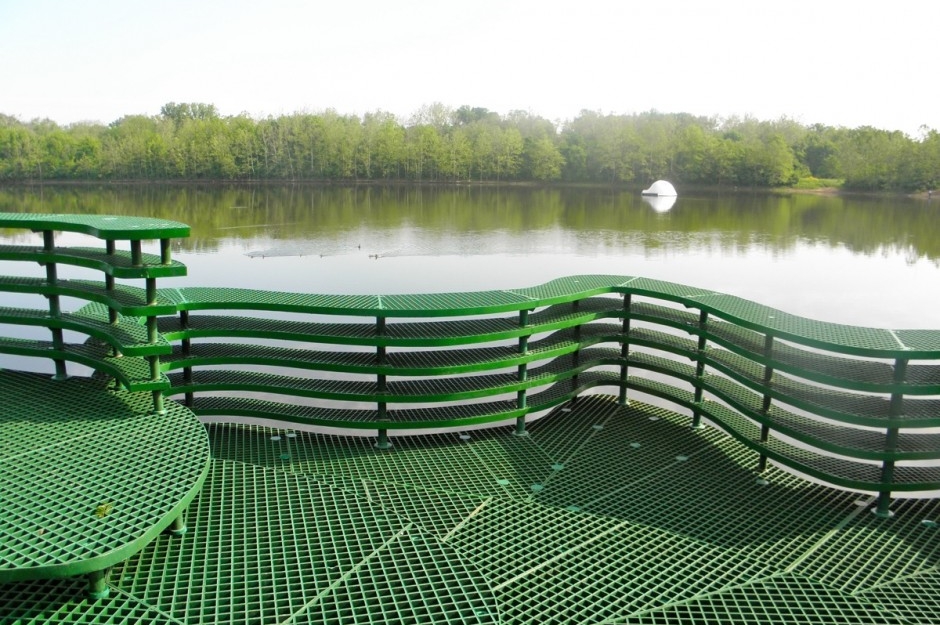 Kendall Buster designed a green fiberglass and steel pier that overlooks the lake. The layered platforms are meant to mimic the contours of a topographical map. And it's the only piece of art I've ever seen someone use go fishing. 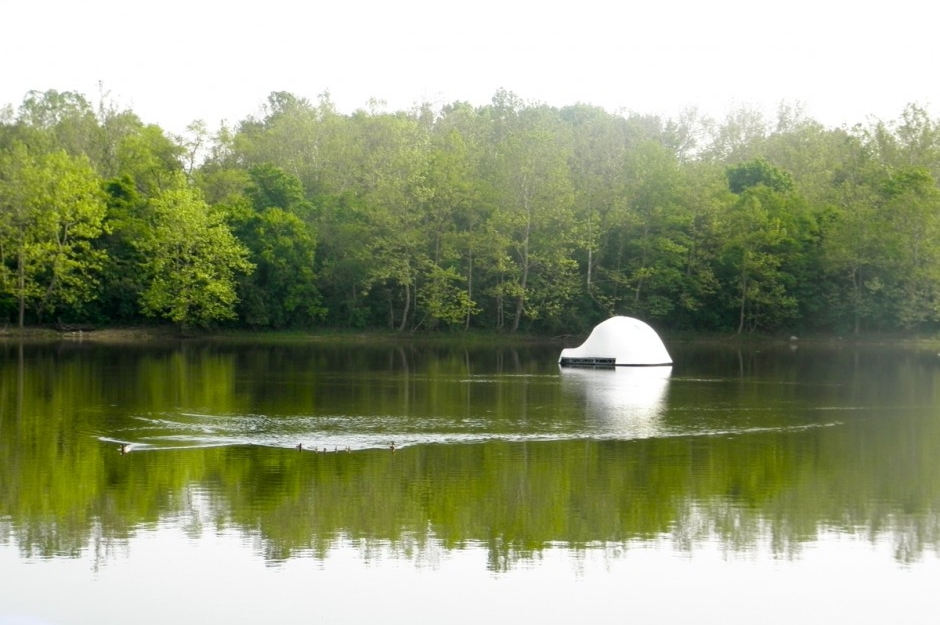 Andrea Zittel made this 20 foot dome as an "experimental living structure that examines the daily needs of contemporary human beings." For the next four summers, it is open for artist residencies, where the participants can customize the space however they need, and then live on the island for several weeks. 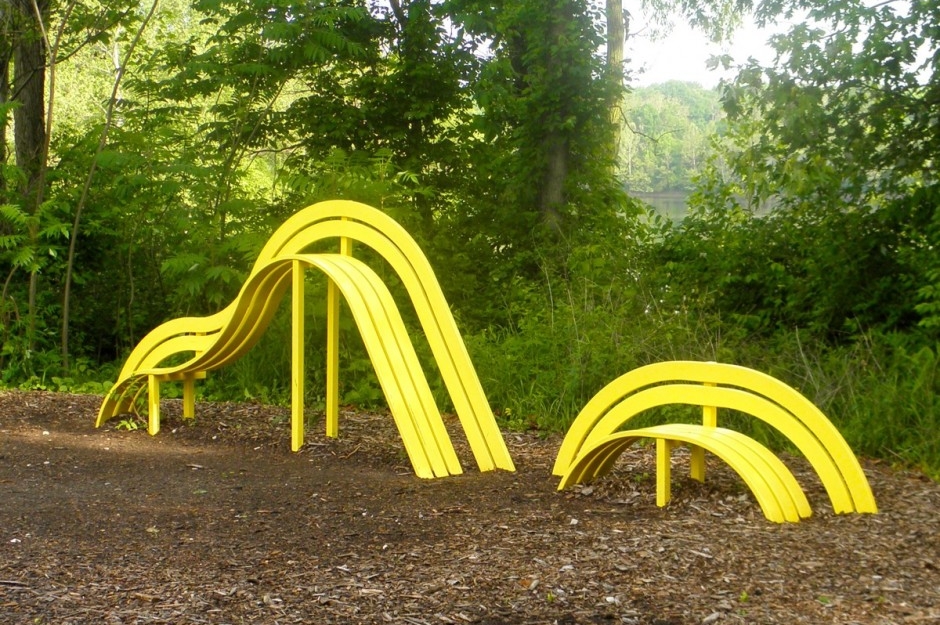 15 yellow benches can be found throughout the park. Danish artist Jeppe Hein sees the piece as "one long bench that emerges from the ground, twists, turns and submerges again, forming a circuit around the Park’s 35-acre lake." 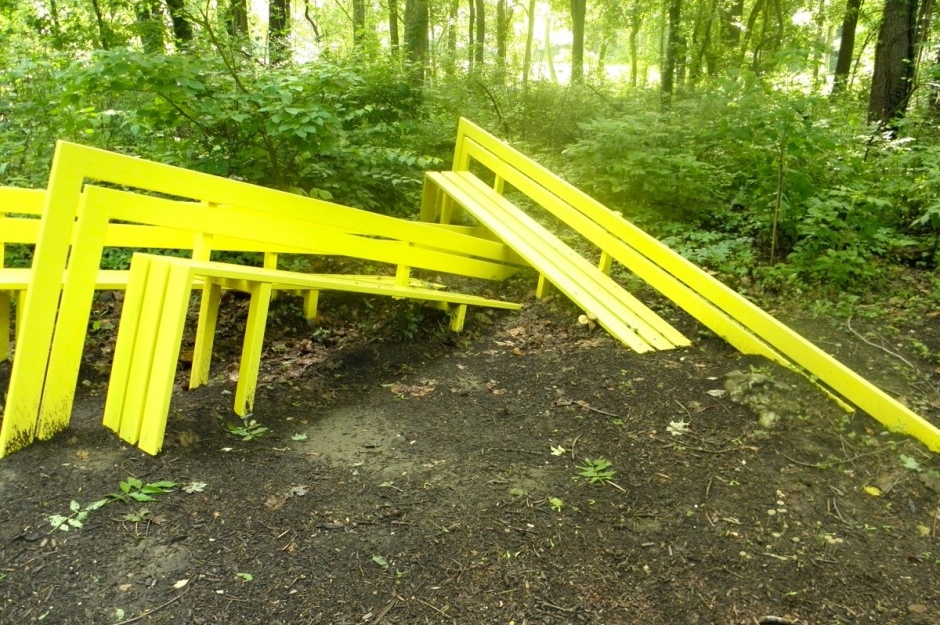 The word "bench" is a bit of misdirection in a way; the piece "challenges the assumption that a bench is made for passive sitting, encouraging visitors to explore less frequented areas of the Park..." 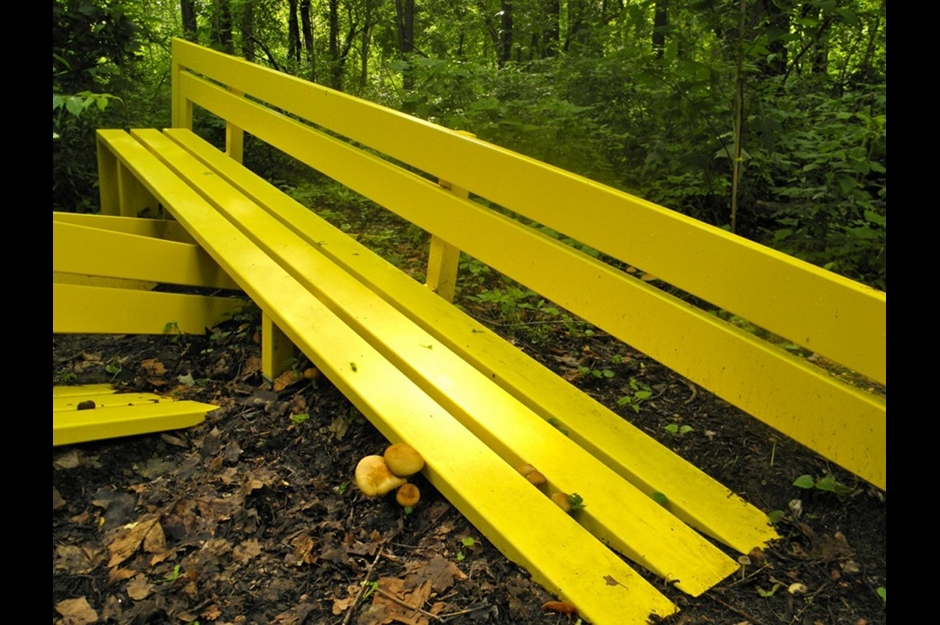 One of the benches in the woods. 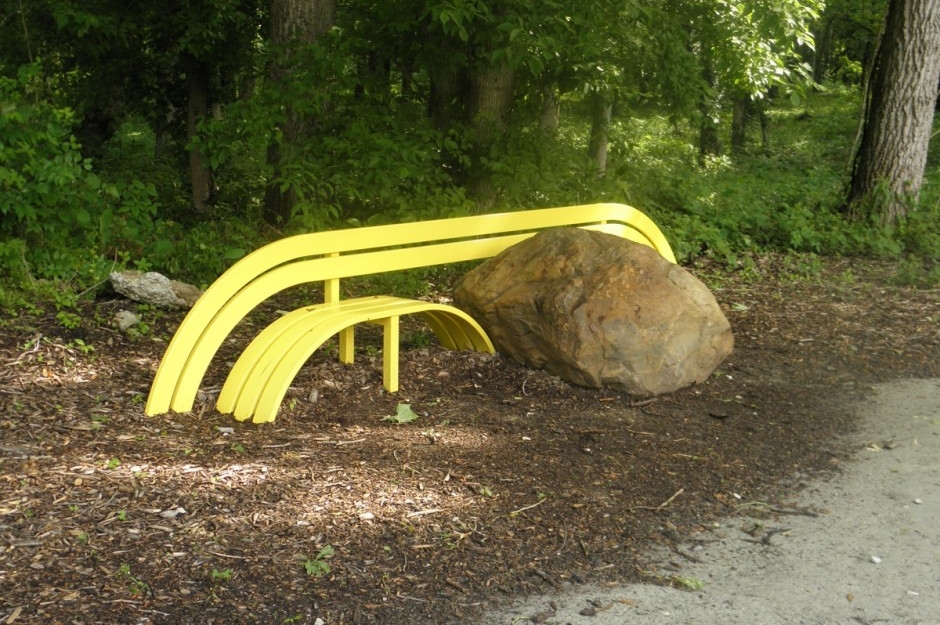 The benches start to seem as though they are somehow a natural part of the landscape. 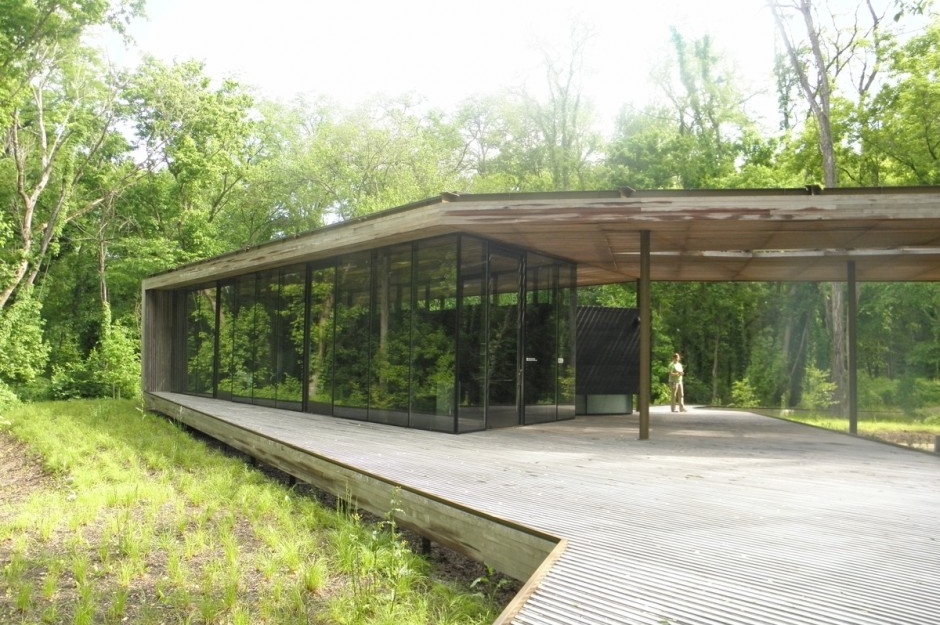 Even the visitor's center is basically a work of art. Designed by Marlon Blackwell Architects, it was inspired by the shape of a "fallen, folded leaf. The large angular deck folds back on itself to form the canopy above, both of which are constructed to allow for the free flow of sunlight and rain water, and the unique visible steel structure of the building is reminiscent of the leaf’s skeletal veins."