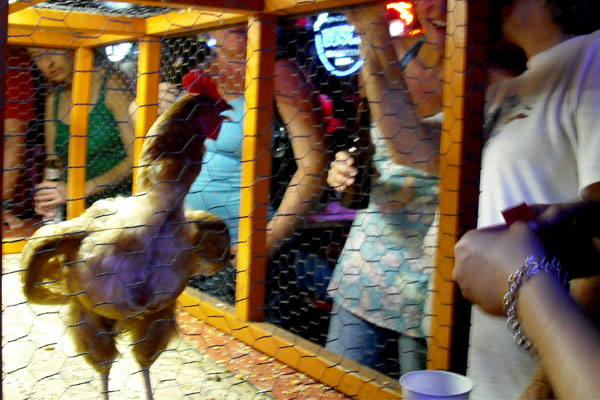 Ahhhh dive bars. The smells. The clientele. The homey feeling that says, yes, you can wear your pajamas here and no one will even look at you funny. And makeup? What make up?

“COME AS YOU ARE,” says the dive bar. “I won’t mind, because at least you look better than Sheryl who lives 2nd bar stool to the right of the beer taps. You know Sheryl of the puckered cleavage and cackle seasoned with a mild windpipe obstruction?”

Whenever I move to a new place, I head straight for the dive bars. That’s where you get a feeling for the true heart of a city. The people you meet at dive bars are the real thing. I’ve lived in Austin, TX for a while now, and this city is rabid about its dive bars. I’m sure to piss off a few aficionados, but this is where I get my beer. 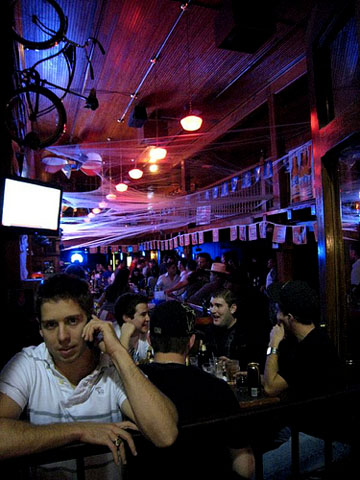 Photo of what you’ll be avoiding in Austin: Neeta Lind

One of the best things about Texas is the legality of the set-up bar. This means you bring your own liquor. Just about all of the dives mentioned here are set-up bars. They do sell beer, but bring your own bottle of Wild Turkey and for a few bucks you can get some ice and mixers and have yourself a good cheap drunk.

On Sundays, bring your lawn chair and maybe a cooler to the parking lot because the place gets packed for chicken shit bingo.

Pick a square, everyone gathers ‘round to watch, and if Sissy the chicken takes a shit on your square—you win!

Really, everyone wins when you can answer the question “What did you do with your Sunday?” with “Oh, I watched a chicken shit.” That’s what Hank “Big Billy” told me as he sweated in his trucker hat and spat some chaw into a styrofoam cup. Go there. You’ll meet him. 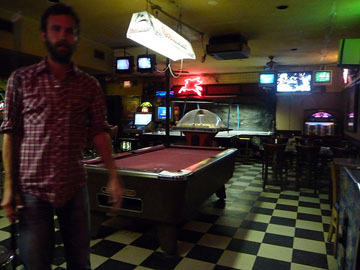 C-Hunt’s is a cash-only, BYOL establishment with a popcorn machine and a pool table. Don’t wear your flip-flops, though. There are usually rocks and assorted beer caps on the floor and you could injure some toes. Outside is a kick-ass patio with picnic tables and a massive vine overhead.

Most of the good dives are off Burnet Road. Burnet Road is the Mecca of Dives, and Austin itself is a Dive Bar Mecca. I guess that would mean C-Hunt’s is a Triple Mecca.

Get yourself a Lonestar, the National Beer of Texas, for a buck, and get some dirty, dirty jokes from the creepy owner for free. Can’t beat that deal. 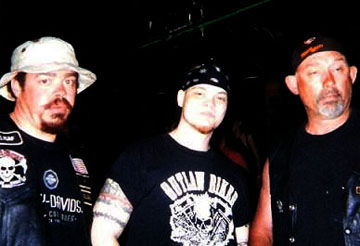 Photo of the people you may meet: DC FIXX

This place hides out in far south Austin, and it’s the kind of place where the music stops and the regulars’ heads swivel around to stare at you when you walk in. “You from around here, boy?” Or girl, depending. I like to think that all the license plates on the wall are from the out-of-towners who got waylaid in the parking lot.

Nah, it’s not that bad. This place is honky-tonk, so it’s a good place to check out live music. And rednecks. Lots of rednecks.

If you’re under 50, you’re probably the youngest person here.

I like a place where you walk in and are reminded that people used to be able to smoke in bars – not because I’m a smoker, which I’m definitely not – but I am pro-freedom. Austin passed a smoking ban just last year. It gets more citified and Californicated every year – it was bound to happen.

Sam’s Town still has a cigarette machine. I think the deal is that this place is actually right outside the city limits (as in a few feet outside). This dive is right in the middle of a neighborhood, and the owner actually lives here. In the bar. I’d call that pretty welcoming.

You can smoke here too, and you’ll meet some characters. That could mean out of a horror flick, or just plain truck drivers.

You better like country, or you are out of luck at the Horseshoe. You have about five beer options and you’d better not order anything too fancy or you might get tossed out into the parking lot. I take my handy little flask here, because the sign on the door encourages it.

Last time I tried that at some snooty 6th Street bar they told me it was illegal and also to “get out.” Screw them.

The Horseshoe is always more fun anyway, and the staff is sweet. Watch for that guy that sells tamales, I think they’re awesome but it could be because I’ve never had one sober.

Most of the time, you will get to witness at least one good fight so wear your brawling shoes. 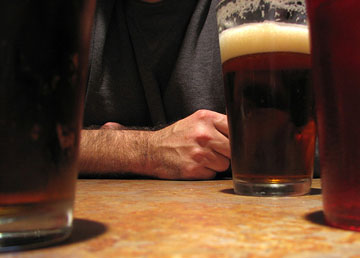 Another Burnet treasure. They do have a few bottles of liquor here, so you don’t get to bring your own.

The two ancient, cranky ladies that own/run the place decorate for Christmas year-round, or more truthfully they just never take the decorations down. There’s some back story about a death in the family and the dead person liking Christmas a whole lot, but honestly when I heard the story I was beyond remembering it the next day.

Note to self: when doing a bar crawl along Burnet, you will never remember anything the next day. Please remember to remember that next time.

This place is definitely in the city limits and there are definitely always people smoking when I pop in. Go during the week, it can get crowded on the weekends.

It’s right in the middle of the shadier part of the East side of town, which some people are afraid to drive through but which happens to be my neighborhood.

If you want to hear the blues or funk, go to TC’s.

Some nights there aren’t any white folk present, and that usually means that’s when the good blues is playing. This place gets packed, sweaty, when the music takes over and the whole place shakes with dancing in a slo-mo, hot southern night. Mondays are good, the cover is $3 but they have free food. 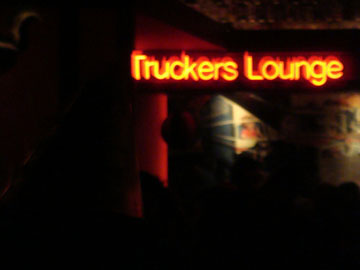 Donn’s is actually a depot, a refurbished old train station. I like trains, and I like bars, so I’m pretty happy when they’re both the same thing.

Be careful walking around in here, the floor seems to be several different levels just waiting for a drunk so it can cause a faceplant. Evil floor.

You can still get cheap drinks, but there is often a cover. I know this is a live music town, but I am a conscientious objector when it comes to covers.

The best things about Donn’s are that you can really say hi to Donn, and there is a stripper pole in the bathroom. I like stripper poles.

How to plan for 2021 travel in the age of COVID, according to 23 travel agents
Everything Americans need to know about traveling to Mexico right now
These destinations are open to US tourists this winter
Enjoy Maui’s Road to Hana longer with an epic overnight stay along the way
13 airports where you can get tested for COVID-19 in the US