“SPACE” FOR ME IS A loose term, but here in Brooklyn it generally refers to the places in which different members of Brooklyn’s creative class live, make art, throw parties, and create — making every day a little more magical and a lot less boring.

These are spaces we can visit or look at or live in when we need to transcend our real-world doldrums, when we need something a little more interesting to do on a Friday night than go to a bar.

Representative space: Red Lotus Room
Anyone can buy a keg and throw a party. Anyone can throw a theme party, too, but in Brooklyn we’re elevating that idea to a high art. Rubulad has been doing this for over a decade, with themes as bizarre and unexpected as “Laundry Day” and “Night of the Living Toys.” Groups like Dances of Vice and Gemini & Scorpio throw over-the-top theme parties, too, from Edward Gorey Halloween to Bootlegger’s Ball.

But it’s the monthly Shanghai Mermaid parties at the Red Lotus Room that typify how all-encompassing a Brooklyn underground theme party can be. The walls are draped in velvet, there is no entry without a period costume, and the entertainment encompasses theme-appropriate bands, fire-dancers, burlesque performers, aerialists, and more. Walking into the party is like stepping into another time. Says Juliette, who runs the space, “That’s really my goal, to make people feel like they’ve been completely transported.”

Representative Space: The Schoolhouse
Between the density of our neighborhoods, the impossibility of finding enough studio space, and the fact that everyone’s broke, Brooklyn artists are doing incredible work to create and repurpose unusual spaces in which to create. Swimming Cities does it on boats, Bushwick Project for the Arts did it in trailers, Cedar House does it in an old Victorian mansion, and the artists of The Schoolhouse have just that, a decommissioned public school from the late 1800s, in which they paint, play music, make mobiles, and throw parties. It’s an incredible, cavernous space, with more than enough room for anything a bunch of artists could think to do.

Representative Space: Brooklyn Brainery
One of the most exciting things about being in Brooklyn today is how eager everyone is to share their talents, to collaborate and learn from one another. There are several nerdtastic amateur lecture series, like Nerd Nite, Secret Science Club, Adult Ed, and Open City Dialogues, and there are also entire spaces dedicated to interactive skillsharing, like Scanlan Glass for glassblowing, 3rd Ward for welding and circuitry, and the Brainery, where you can learn anything from Haitian Creole to calligraphy to the history of pizza. 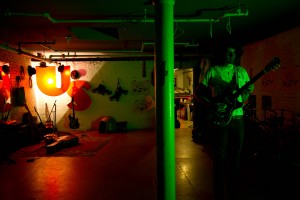 Representative space: Silent Barn
It’s not like basement, backyard, warehouse, or rooftop music shows started in Brooklyn in the aughts, but we certainly have them all over. There’s punk in Sunset Park at the Jerkhaus, metal in Crown Heights at Port D’Or, and hip-hop in Bed-Stuy at the Lab.

Then there’s the quintessential scruffy DIY basement venue Silent Barn, which was technically one block outside of Brooklyn, in Ridgewood. Community support for this movement is so strong that when the Barn was violently ransacked, within two months they’d raised an astonishing $40,000 through Kickstarter toward a new space.

Representative space: House of Yes
The caliber and variety of performance in Brooklyn is unreal. We’ve got puppet theatres like Puppetworks and the Cosmic Bicycle Theatre, dance at Spoke the Hub and Chez Bushwick, burlesque at Galapagos and Sideshows by the Seashore, comedy at Castlebraid and Dead Herring, and aerialist and trapeze shows at Big Sky Works and House of Yes.

House of Yes is one of the most incredible spaces in the borough, a completely renovated former ice warehouse with 35-foot ceilings, at which you can see the most daring, elaborate, high-energy aerial plays and performances, complete with handmade costumes and live musical accompaniment.

Representative space: Breuckelen Distilling Co.
The DIY resurgence has hit Brooklyn hard, and you can find someone making just about anything, from Anarchy in a Jar’s artisanal jam to Metropolis’s vegan soaps to Llaves Design’s piñatas. 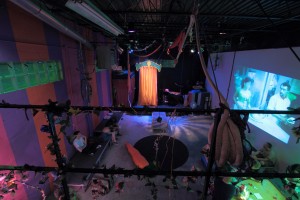 Breuckelen Distilling Co. makes small-batch gin and whiskey in a repurposed boiler room, sourcing all their ingredients from within New York State. As Breuckelen’s owner Brad said, “I saw all these people in Brooklyn making stuff, taking something and transforming it into something totally different. I wanted to do something like that, to make a contribution.”

Representative space: Trinity Project
Even though the occupation is down on Wall Street, Brooklyn has countless community and activist groups, be they political, artistic, or religious. 123 Community Center was an anarchist-run meeting and tutoring center that served weekly pancake breakfasts and taught bike maintenance. The volunteer-run Bushwick City Farm provides food, clothing, and education to the neighborhood. Trinity Project, housed in a church built in 1841, rents out unused rooms as artist studios, and in exchange the artists help maintain church grounds and teach art classes at an affiliated Catholic school.

Representative space: Lost Horizon Night Market
And finally there’s just straight-up silliness, the completely bizarre happenings that no one really understands except the people planning and participating in them. We’ve got groups like Newmindspace and Fluff’s putting on Lightsaber battles and Big-Wheel races. We’ve got the Idiotarod, an annual inter-borough costumed shopping cart race, and design company Macro|Sea making pools in repurposed Dumpsters. (Some of these actually take place in Manhattan, but come on, everyone who participates obviously lives in Brooklyn.)

And then there’s the best of all, the Lost Horizon Night Market, a sporadic, itinerant series of interactive art installations inside of rented box trucks. Why bother producing such nonsense? Kevin, one of the people who started the Night Market, said, “We believe it’s a nicer world when everyone can create with and learn from one another instead of relying on the world of commerce to tell you what to do and whom to meet.”

Tagged
Art + Architecture Insider Guides
What did you think of this story?
Meh
Good
Awesome

15 Signs You've Been Away From Brooklyn Too Long